If you are a frequent reader of this blog, you know that automobiles are often featured. I have previously written on cars and the magic they represent for me. As any fellow car lover knows, we like to collect cars and of course take pictures of our cars. Who else would have a collage of their cars hanging on their wall?

But there is one car in particular that holds a special place for me. 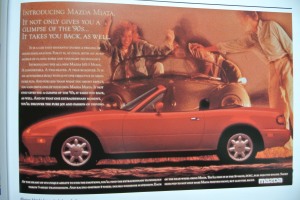 Ever since I saw the first picture of the Mazda Miata, I was smitten by it. But I actually developed a love for a small convertible in college years before when I borrowed my brother-in-law’s Triumph TR-6 one weekend. I have always loved to drive and I found driving a convertible enriched the experience tremendously. And with the Miata, here was a fun convertible that overcame the frustrations of that unreliable Triumph with reliable Japanese manufacturing and quality.

This desire was confirmed after I married and was at my brother-in-law’s house soon after he purchased his first Miata. He let me take it out for a spin and I was sold. I knew I had to get one; I just needed to figure out how. Unfortunately, my daily driver at the time needed to have more than two seats since I dropped off our three kids at school on my way to work. My lust for a Miata grew even more a few years later when my brother also purchased a Miata. Since he was not married at the time, a two-seater was a practical choice for his daily driver without problem.

The stars finally aligned for me in December of 1996 when I purchased this very slightly used—less than 10K on the odometer—1994 Mazda Miata. This car has been in our family ever since and has become affectionately know as the “Marshmallow.” And I use that “in our family” phrase because the car has been used not only by me, but by my two sons as well.

In December 2016 when she was celebrating 20 years with me, I wrote about how for five years, she had been my daily driver until she was first “loaned” to my oldest son and then to my youngest son. With both my sons now being “family men,” a small two-seater is no longer a practical car for them. So at the end of that 2016 post, I described my 1994 Miata’s new home at our condo, where my 2002 red Miata also resides. 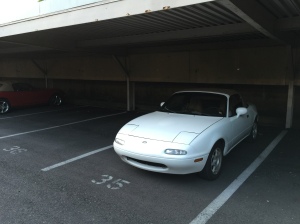 But this winter proved to be particularly hard on both my Miatas with the bitter cold weather we had in Memphis.

Now that both my wife and I have fairly new Subarus as our daily drivers, neither my 1994 Miata nor my 2002 Miata gets driven very much. Since I wrote those two blog posts about them in 2016, neither Miata has clocked many additional miles with the Marshmallow adding only 1,700 miles since it hit that 150,000 milestone on October 1st, 2016. So with the infrequency of their use and the extended cold days this past January, their batteries died—more than once each. I had to jump start them multiple times and eventually the battery in the 2002 Miata couldn’t hold its charge and had to be replaced.

After returning from an eleven day trip in February to find both Miata batteries dead once again, I knew I needed to do something. I started to think that maybe I wouldn’t be able to drive three different cars enough to keep them all in good service. And I began to consider the unthinkable. Selling the 1994 Miata.

I had originally planned on keeping this car at least until it became a classic (defined as 25 years old), not so much that I thought it’s value would increase, but that as much as I love cars, I thought it would be exciting to know I owned a classic. And what better classic to own? Sales figures and the Guinness Book of World Records support me when I say that the Mazda Miata has been the most successful two-seater sports car in history.

I did some research online to see what a 1994 Mazda Miata was selling for and found that depending on the features, condition, and mileage, they were retailing for between $2,000 and $3,000. I wasn’t particularly interested in trying to sell it myself so I went to one of those car dealerships that buy and sell only used cars.

I knew that my old girl had a few blemishes (or warts) that would reduce her value but I was rather surprised when the wholesale appraisal came back at just $700. But I was actually glad because right then and there I decided that I would never sell her.

I had been on an emotional roller coaster ever since I started considering selling her wondering if I could really go through with disposing of a car that I had loved for so long, one that both my sons had enjoyed driving as well. So it was with a bit of relief that the offer came back so low that I would never consider following through with that dastardly deed.

Since that resolution, I have now given up her reserved parking spot at the condo and driven her back home for good. That way I should be able to drive her more frequently since she will be where I live full-time. Since we only have a 2-car garage, she will spend most of the time either parked on the driveway or the street.

Interestingly the day after I brought her home, I woke up the next morning having had a dream that someone had crashed into her while she was parked on the street—a total loss due to her low residual value. It was an unsettling dream to have, maybe my subconscious punishing me for even considering such a move. But nightmares aside, she will still be lovingly taken care of and I will enjoy driving her as long as she continues to run. How long that may be I don’t know but if she makes it to 25 years becoming a classic, all the better!