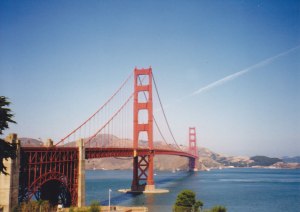 I have always been enamored of the Golden Gate Bridge but it wasn’t until 1998 while on a business/vacation trip with my family that I got to see it for the first time. Having only seen photos of the bridge, I was not prepared for its massive scale. Even staring at a cross section of the cable used to support the bridge, I was amazed at how a legion of steel wires (27,572!) no more than one fifth of an inch (0.196”) in diameter spun together formed each of the two gracefully sloping cables that provided the strength to suspend the massive weight of the bridge 220 feet above the water. 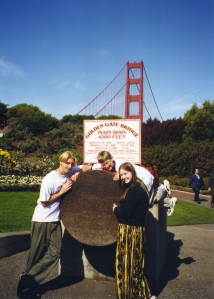 The scientist in me wanted to explore the engineering marvel of building such an awesome bridge. Later that afternoon as we were enjoying a cup of coffee at a local bookstore, my eyes ventured across the cover of a book, Spanning The Gate, that pictured a worker standing on two of the wires on the unfinished bridge. I snapped it up, found a spot to sit, and began reading it even before I paid for it. 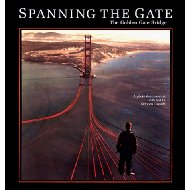 Just flipping through the book, I could see that it was loaded with actual photos of the construction process. However, I forced myself not to just stare at the pictures before I read the story behind them. With the childlike anticipation of treasures to come, I began to read.

I must say I was disappointed in the beginning because the first several chapters were about the history of that region and the politics of getting approval to build the bridge as well as the debate over what type of bridge to build. With the “Are we there yet” anxiousness of a child, I wanted to get to what for me, was the real story, the building of the bridge itself so I could explore the pictures as I read the story. I couldn’t wait to learn about the engineering challenges that had to be overcome and the pictures that proved someone’s brilliance.

The photos included in the book did not disappoint and as I read the construction story, they added visual explanation of the engineering marvel of the building of the bridge. But the story was too brief and only whetted my appetite for learning more about the bridge. 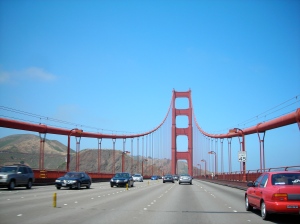 Over the next 19 years, I visited San Francisco twenty times either to visit family there or for business reasons. On many of these trips, as a part of our sightseeing, I tried to capture a different photographic perspective of the bridge I loved so well. Then last October while visiting our son, who lives south of San Francisco, I was perusing his bookshelves when I ran across this 30-year-old book. 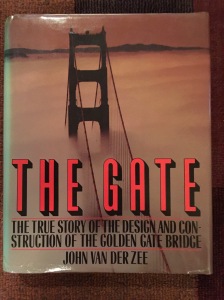 Quickly flipping through the pages, I immediately realized this was the book that I had been looking for all those years ago, the one that would tell the complete story. And author John Van Der Zee published it in 1986, just months before the celebration of the 50th anniversary of the completion of the bridge. My son graciously consented to me borrowing the book. 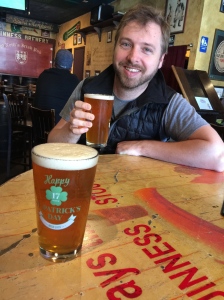 With my previous reading of the shorter book, I new a big part of the story was before construction ever began. But in spite of this foreknowledge, I was still surprised to find that over half the 325 page book was dedicated to this phase of the project. I learned there was a reason and I was glad it was written that way.

Taking almost all day long to fly home from San Francisco, I devoured the book reading over 1/3 of it before I got home. The back-story was amazing.

If you are familiar with the building of the bridge, you already know that Joseph Strauss was the Chief Engineer for the Golden Gate Bridge. But what you might not know is that Strauss had never built a suspension bridge before in his career. However he was the individual, with significant help from other political allies that sold the idea of building the bridge as a private endeavor through the creation of the Golden Gate Bridge and Highway District.

Strauss had only built cantilever bridges in the past and his first design idea was a grotesque cantilever-suspension hybrid. Ironically this was the design used to successfully sell the bridge idea politically and financially. Fortunately it was dropped, as had it been built, the Golden Gate would look much different today.

Strauss was fortunately smart enough to get other experts involved with the design and engineering. Sadly two individuals, Irving Morrow and Charles Ellis never received their due recognition as Strauss took full credit for their work. It was thanks to Morrow that the bridge took on its graceful art deco appearance. And since one of the requirements of the Bridge District was to know the full cost of the bridge before any bond money could be spent, Ellis, using long hand math computations, engineered every facet of the bridge so that it could withstand the ferocious environment (sea and wind) it would be exposed to.

The actual building of the bridge encompassed almost the entire rest of the book and gave me the level of detail I had wanted to read about. Interestingly, the San Francisco-Oakland Bay Bridge was being constructed at the same time but was a recession-era WPA project and thus was supported by federal dollars. While financed differently with quite dissimilar technical issues, the two bridges competed for the same construction and engineering labor pool. 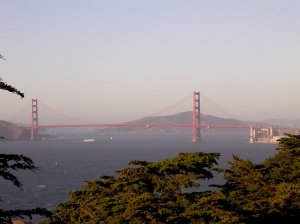 But beyond the intriguing engineering challenges that had to be overcome, another interesting aspect was just how the final bridge color was selected. Shades of silver, grey or black were common colors used at the time and there were proponents for each. But it was Morrow’s esthetic eye for beauty that desired a warm color to compliment the beauty of the pristine Golden Gate. Knowing that the bare steel needed to be protected from the harsh environment it would be in even during construction, the parts were shipped with a factory coat of red lead paint. With much of the finished structure painted thusly, it offered a preview of what the bridge could look like and thus was not a quantum leap to the Dulux International Orange color that was selected, a paint color that is almost continuously being applied to some part of the bridge due to the harsh climatic conditions the bridge must endure.

The finished bridge officially opened 27 May 1937 as a Pedestrian Day, just like the opening of the Brooklyn Bridge in New York, 54 years previously. Last year, I wrote about that bridge, the first Great Bridge, with its personal connection to my son. Thanks to this most recent connection with my son through his book, I am now able to write about this other great bridge. 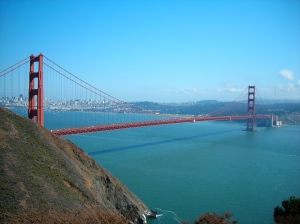 It is believed that this is the most photographed man-made structure in the world. And while there have been other suspension bridges built since then, none come close to the beauty of this iconic structure or to the picturesque setting in which it majestically stands. No wonder it is one of the most widely recognized bridges in the world. In spite of personally having taken 39 photos from six different perspectives, no doubt I will continue to view the bridge through the lens of my camera on future visits to San Francisco.

2 thoughts on “Building Books – Another Great Bridge!” Leave a comment ›