Never did I imagine when I excitedly completed the purchase of this slightly used 1994 Mazda Miata in December of 1996 that I would still be driving her almost 22 years later (to me all fun little sport cars like these are females).  Nor did I consider the first time I drove her home that she would become the first classic car I would ever own or even the first car of mine to reach 150,000 miles. 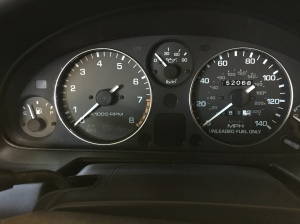 But as of the fall release of the 2019 Mazda MX-5 Miata, my 1994 Miata, affectionately known as “The Marshmallow,” (so named by one of our artist friends for its toasted tan colored top over miniature white body) has reached that significant milestone—a 25 year-old classic! 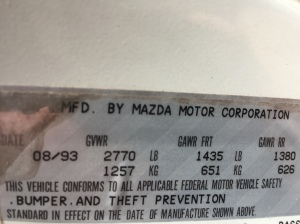 Technically, she actually reached the age of 25 this past August based on her date of build, as displayed in the door.  But I decided to wait until the release of the 2019 model year to actually celebrate the event.

If you are a devoted follower or just an occasional reader of my blog (Thanks!), you know that I have written several times about this car, most recently when we celebrated 20 years together (No Longer a Teenager!) and then when I was considering the blasphemous deed of selling her (Has Her Time Come?).  But that entire potential break-up ordeal is behind us now and we will be together for the duration.

Reaching this significant life milestone (at least in a car’s life) is something I have pondered about ever since she returned home in 2011 from her extended stay with my oldest son in San Francisco.  After nearly being totaled following her run in with a San Francisco fire truck (she was sideswiped while parked on a narrow street), I realized her chances of reaching the 25-year mark might be tenuous at best.  But uncertain as it might be, I still wanted to try.  And in July and August of this year as we got closer to “the official date” of her reaching classic status, I sometimes even decided not to drive her just to keep her safe at home until the actual day, a task hard to fulfill given how much fun she is to drive.

Last year, my excitement for reaching this goal was fueled even further when one of my daily Autoweek newsletters included an article that the Mazda factory in Hiroshima was starting a Miata MX-5 restoration program in 2018 to celebrate the earliest roadster’s 30th birthday (the original 1990 model was launched in the US in May 1989).  For cars making this nostalgic trip back to the factory, it would be like going home to where you were born and getting a thorough makeover to restore your youth, vitality and good looks.  I still have that e-mail although I have never explored what it would cost to rejuvenate mine (first cost alone is to ship her to Japan to the factory).  I suspect the total cost would be well in excess of the original $14,000 that I paid for her used.

Driving her recently and hearing all her squeaks and rattles, seeing her check engine light flashing ominously at me, sweating from her nonfunctioning air conditioner, and feeling her torn leather seats beneath me, it was still fun to dream about that possible renovation and what it would be like to drive her with the feel of a brand new car. 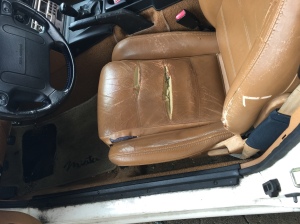 It would still probably be cheaper than buying a new 2019 model as a similarly equipped Miata is listing at over $30,000. 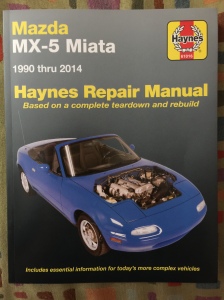 But for now, I have taken the less expensive option of purchasing a repair manual with plans, now that I am retired; of doing some of the needed repairs myself.

I discovered on Labor Day that the 2019 models had in fact arrived at dealerships so I chose that day to celebrate her attainment of this automotive status.  I gave her a thorough bath and a sorely needed wax job (she had been sitting outside on the driveway and tree sap had been dripping on her staining her black).  I even pressure washed her stained convertible top to make it look like new when I couldn’t find any other cleaner to get the black stains off. 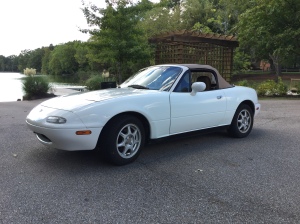 I put her top down and for the first time in I don’t know how long, installed the boot cover (folded top cover), which also needed a thorough cleaning.

To celebrate her milestone, I drove her on some nice curvy roads close to home that a friend of mine introduced me to almost 20 years ago when we moved to this neighborhood.

As I drove these winding, majestic tree-lined two lane roads, listening to her wonderful exhaust note (one of the best in my opinion), I reflected back on some of the fun drives we had shared together.  Ironically as many times as I have driven the Blue Ridge Parkway and the Tail of the Dragon, I have never taken the Marshmallow on these treks.  But there were still many other fun roads we had shared together at least until I recalled the time when my youngest son was driving us on the Pacific Coast Highway south from Sea Ranch when I realized with tires squealing around a sharp corner that all there was between our car and the cataclysmic sheer drop to the ocean below was a lowest bid guard rail.

But in spite of her shortcomings, hearing the exhilarating sound of her exhaust note as I quickly accelerate still brings a smile to my face whether I have the top down or just the windows open.  And now that she is a 25-year old classic car, that smile has grown even bigger.

But unless you are driving towards me to see that smile and that iconic Miata wave, this may be your only view of me as I, grinning ear to ear, zoom zoom away!