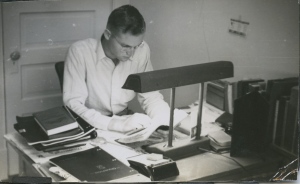 Over the year of reading my dad’s sermons, I feel like I have learned a lot. The oldest of these sermons date back to the early 1950s when my dad first became a Presbyterian minister. Thanks to his dedicated organization, his sermons are each numbered in chronological order by date written, along with each time he gave that sermon. 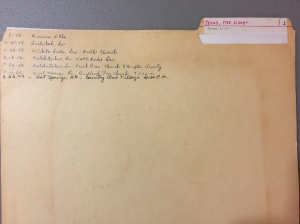 I found that for some of the oldest ones, there was only an outline or brief notes for my dad to follow. 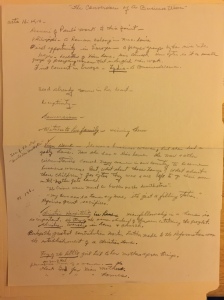 For these, I could only imagine what message my dad would have conveyed.

But even in some of these, I would occasionally gain some insight through the church bulletins that my dad saved with his sermons each time he gave that particular sermon. Like this 1966 bulletin which featured on its cover, a photo from my favorite place on Earth, Montreat, this occasion celebrating the 60th anniversary of its founding as the conference center of the General Assembly of the Presbyterian Church in the US. 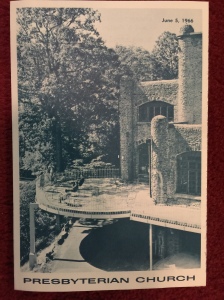 Another bulletin of particular interest was one announcing a Men-of-the-Church dinner that featured “Squirrel Mulligan.” I can’t even imagine what that tasted like but obviously must have been popular dinner fare for this small town in Arkansas where the church was located. I noted this bulletin also welcomed my family to that new church which gave me the date of when we moved there.

So with this glance to the past, I had been looking forward ever since Christmas to Lent when I would once again daily read one of my dad’s sermons.

And on the eve of the first Sunday in Lent, I just so happen to read a sermon from my dad, originally given on the first Sunday in Lent, 1953. The title was “Overcoming Temptation” and was about the 40 days that Jesus spent in the desert prior to the start of His ministry and the three temptations He endured. This familiar story is, no doubt, covered each year during Lent but I thought it intriguing that by happenstance, I was reading it at the same time it was first given, just 65 years later.

Dad’s words gave me the best understanding I have ever had of this significant event, how Jesus overcame the temptations, and how this message is still relevant for us today. Ironically when I went to Mass on Sunday morning, the day after reading this sermon, the Gospel reading and Homily were also on this very subject. It was with increased interest and new understanding that I closely listened to the priest’s words. 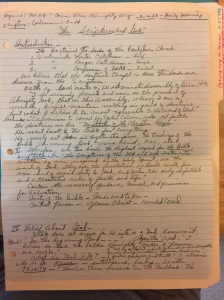 Another series of sermons that I read were ones Dad gave covering the history of the Presbyterian Church. These were also written in 1953 but since they were never given again, only brief notes were created. Thus I had to imagine what words beyond those handwritten on his pages Dad would have uttered.

Each day I read one of my dad’s sermons, I tried to picture myself listening to him. For his sermons that had been typed more recently which included his special color-coded underlining… 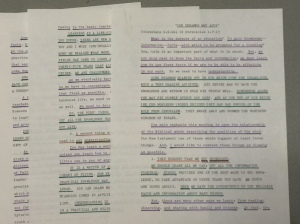 …I could almost hear my dad’s familiar voice, with emphasis on the underlined text, speaking directly to me. It gave me a close sense of his presence, even so many years after his death.

Each time I took out another folder, I would scan the hand-written dates to see when the sermon was given. I was looking for the sermon Dad gave on the day I was born, very early on a Sunday morning. I knew this one would be extra special to me as he announced my birth to the congregation from the pulpit that morning. Unfortunately, I did not run across it during this Lent. 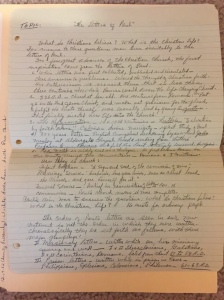 But the sermon that gave me chills and goose bumps when I read it was number 156 from a Bible study series Dad gave in 1952 entitled the “Letters of Paul.” This sermon, just three hand-written pages long, briefly discusses each of the letters Paul wrote to the early churches. Tears came to my eyes when I read Dad’s notes for Paul’s Letter to the Philippians and the Bible passage he included in his notes that read, “For to me to live is Christ, and to die is gain.” I’d known since my dad died in 2002 that this particular Bible verse was significant to him but I never knew why. Sadly, Dad’s few words captured in those notes about Paul’s Letter to the Philippians—“The Ideal Christian will live a life Worthy of the Gospel under all circumstances,” and “A Pastor to his flock”—are all that I have of the significance this Bible passage held for my dad throughout his life, something so meaningful that it would be underlined in his Bible… 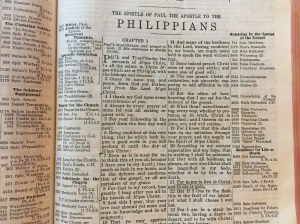 …and engraved on his tombstone. 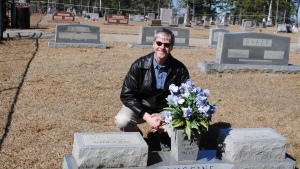 A lifelong aspiration he certainly achieved as witness by all those who knew my dad, but one he only completely fulfilled with his death. 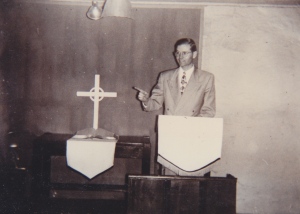 Thanks to these preserved writings of my dad, what an incredible learning Lent for me. Happy Easter!!