It is March Madness, which for many college basketball fans is March Magic with all of the fun and excitement during the tournament.  But this post is about another kind of magic–the magic you see in a child’s eyes on Christmas morning when he or she finds new treasures awaiting them under the tree.  I know it seems odd talking about Christmas when it is more than nine months away but I was reminded of that magic as I was driving back to work just a week ago and glanced towards the rearview mirror of my convertible as the bright sun shown down.

I often say I have very few memories of when I was younger than five, a time when that Christmas morning experience would have been most magical.  Since our minds can store incredible volumes of information, I am sure those memories are there just waiting for the day when they will zoom to the forefront of my thoughts.  While the only Christmas images I can recall from those early childhood years are the ones I have seen in home movies, I had a revelation of sorts as an adult a number of years ago.

I distinctly recall a bedtime story that I was reading to our youngest son for the first time: Chris Van Allburg’s now classic Polar Express.  I knew I was tapping into some strong emotions from long ago when as I turned to the last page and saw that bell, I could barely read the words as I choked back tears.  I don’t know if my son noticed my tears or faltering voice but I know after I kissed him goodnight and left his room, that I fell on my own bed and had a long, long cry.  Even now more than 15 years after that experience, I know I have some more discovery work to do as I am tearing up just writing these words.

My son and I read that story many more times together.  For me, it was always hard to finish that last page reading about losing your belief in magic but over time I managed to stop the appearance of tears.  I think the story became a real connection between the two of us as one year for Christmas, my son gave me a special edition of the book that came with a recording of the story AND, a shiny silver bell from Santa’s sleigh!  What a wonderful surprise and gift it was that Christmas morning.

Around this time I was also wrestling with a midlife crisis.  Thinking I was missing out on some of the fun things in life, I made an unwise and expensive purchase (a story for another time).  Over a year working through this crisis, recognition emerged for me – that cars had always been “my magic” and that a small, convertible sports car would be the embodiment of that magic.  This realization and experience led to a much wiser purchase and the day I drove home my slightly used, 1994 Mazda Miata, I hung that sleigh bell with a red ribbon from my rear view mirror as a constant reminder of the magic that I had rediscovered.

What fun I had driving that little car.  I used to imagine the little boy in me riding next to me in the passenger seat grinning ear to ear.  On weekends, I would look for errands to run just to have an excuse to get behind the wheel and put the top down.  At other times, I would just go wherever a little winding road would lead me with no particular purpose in mind other than to have fun. 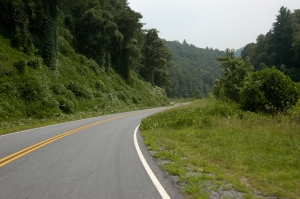 It even acquired a cute name it has been affectionately known by: “Marshmallow,” so named by one of our artist friends for its toasted tan colored top over miniature white body.

This fun continued for five years until 2002 when my oldest son needed to replace his Jeep, which had broken down and needed a new engine.  Since he was in his junior year in college with only future job prospects for paying a car note, I decided to “loan” him the Marshmallow and buy a new Miata for myself.  I say “loan” because I had no intention of giving it up.

So in January, that same bell was transferred to a brand new Miata in what has become my favorite car color and which I appropriately named “Atomic Fireball” or “Fireball” for short.  And there that bell has hung for over 10 years.  I often intentionally go over speed bumps a little faster than suggested just to hear that bell ring.  But it wasn’t a speed bump that brought my attention to that bell this past week.  It was the glory of driving with the top down on a warm sunny day and a casual glance towards the rearview mirror that brought my attention with laser-sharp focus on that magical bell.  It wasn’t ringing; it was silently reminding me of its magic and the magic I have experienced in driving these two Miatas for over 16 years.

While in the hands of first my oldest son, and now my youngest son, the Marshmallow has been well taken care of.  Thanks to both my sons, the Marshmallow has visited the majestic mountains of North Carolina, the deep blue waters of Key West, the expansive coast of the Pacific Ocean and numerous fun destinations in between.  In fact while it lived with my son in California, I had multiple opportunities when visiting to experience the magic of driving it along the Pacific Coast Highway.  Every trip with the top down, wind in my hair, and a big grin on my face.

My collection of magic cars has now expanded to four but that original bell only hangs in one of them.  Each of my four cars has their own unique character and in each of them I have different magical moments.  But it is when I see that bell hanging in the Fireball that I am reminded of the wonderful discovery I made so many years ago.  And then I get a really big smile on my face and punch the accelerator just a notch to enjoy the magical moment.