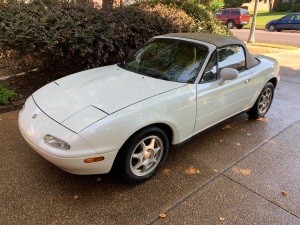 This has been a particularly hard post to write for, how do you say goodbye to a fun little car you have owned for over 23 years, almost half my adult life?

If you read my two most recent posts about her (to me all fun little sport cars like these are females), Has Her Time Come? and A Classic!, one would be lead to believe that I would never part with her.  But sadly, after months of angst, the day finally came for me to say goodbye to my white 1994 Mazda Miata, affectionally known as “Marshmallow,” so named by one of our artist friends for her toasted tan colored top over miniature white body.

So, how did we get here?  It all started in October 2019 when I had her into the dealership for a 153,000-oil change.  When my car was ready, they told me they had discovered that the steering rack boots were torn open, were dripping oil and that the ball joints and tie-rod ends needed replacing.  But since Mazda no longer manufactured the parts, they couldn’t repair it or even give me an estimate on the potential cost.

As I drove home, I recalled Tom and Ray’s frequent dire warnings on Car Talk of how important a repair this was as when one breaks, you lose control and can no longer steer the car.  Driving home, I began to have horrible visions of taking a curve and the car continuing straight once the first tie rod end broke.  I decided right then to stop driving on the interstate as I certainly didn’t want this to happen at highway speed and careen into a concrete barrier.

I pondered this situation for a few weeks and then decided to only drive her on short errands.  I wondered if I was living dangerously even driving her this small amount.  I eventually took it back down to the condo where I would only drive her whenever we went out to a close-by restaurant.

Since I routinely take all our cars into the dealership for all repairs, I didn’t have a trustworthy mechanic that I could take her to.  I did learn that a parts house that specializes in Miata parts did sell the replacement parts, but I knew I would not be able to do the job myself when I explored online and discovered that the entire frontend had to be removed.  At my wife’s urging, I explored the cost of the Mazda factory Miata MX-5 restoration program but found the cost would be over $40,000.  Eventually I learned that my local tire retailer performed this type of work but the cost to replace the ball joints and tie-rod ends would be about $1400—twice its estimated value two years ago.  And even if I did bite the bullet and repair her, the car will still have a broken air conditioner, a nonfunctional radio/CD/tape player, an unexplained flashing Air Bag light, and leather seats sorely in need of replacement. 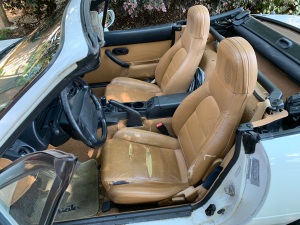 But, in spite of this needed repair, the beginning of the end actually came at about the time the Coronavirus pandemic began to sweep across the US.  Because of the closure of many businesses, in particular restaurants, there was no longer a strong reason for us to spend the night at our mid-town condo.   In fact, the last time we even stayed at the condo was early in February when we spent the night there before my wife flew off on a trip.  As a result, the next time I made a special trip to the condo just to drive her some and charge up the battery, I found it was dead and would not start.  The next time I went to the condo, when I opened the car door, the little dome light didn’t even come on—now a completely dead battery.

I pondered what to do and when I mentioned it to my wife, she said maybe it was time to get rid of her.  That felt like a knife jab to the gut.  But in just a few days, I had moved through the first two stages of grief—shock and denial.  Then began the third stage, bargaining. 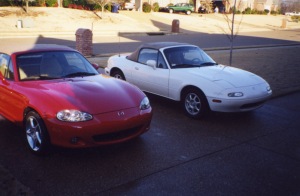 Ever since I bought my 2016 Subaru WRX, I haven’t driven either of my two Miatas very much and as a result, I have had to previously replace the battery in both cars.  When I did, I just bought the cheapest ones available.  So, the bargain I came up with was I would buy a much better battery for the 2002 red Miata and then put its existing functional battery in the Marshmallow.

After driving to the condo and jump starting the Marshmallow, I drove it home to proceed with the battery swap.  As soon as I got home, I turned her off and then tried to restart her to see if the drive home had recharged the battery, thus obviating the need for a new battery.  No dice—still dead.  A few days went by before I had the time to effect the change but, before I could remove the dead battery and take it to get a new one, something else happened. 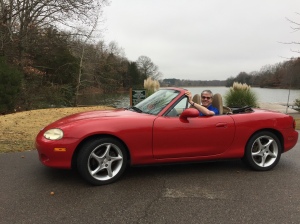 One morning as I was getting ready to back out of the garage, I noticed my red Miata had a flat tire. Assuming I had picked up a nail, I pumped it back up but then immediately began to hear air escaping somewhere from the tire.  As I literally watched the tire go flat again, I knew I could not even drive it up to get it fixed.  I resorted to jacking up the car to put on the spare.  When I pulled off the flat tire and turned it around, I saw that the sidewall on the backside had separated—not an unexpected event for a set of 13-year old tires.

As soon as I realized I would be putting a new set of tires on the red Miata, something snapped in me. I finally recognized that it was just not practical and certainly not inexpensive to try to maintain three different cars, particularly when one was 27 years old and another was 18 years old.

It’s funny how once I finally reached that last stage of grief and accepted that I couldn’t keep her any longer, I felt at peace.  I told my wife that I finally decided that I would get rid of the Marshmallow.  She put up no argument.

I knew from the past that the car was not worth much and having to tow her somewhere would further diminish her value to a buyer.  Thinking back to all the fun years I had of listening to Car Talk, I recalled their often-mentioned program of turning your unwanted car into the programming you loved.  With that in mind, I decided to donate her to our local NPR station to help continue the airing of those Car Talk shows. 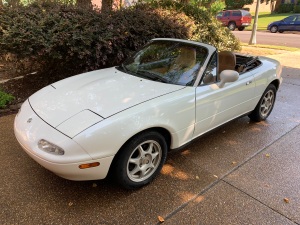 But before I contacted them, I gave her a good bath since I wanted to take her out on one last top-down drive.  It was rather emotional thinking I was washing her for the last time.  Even as I was rinsing out my sponge, it seemed the water dripping down were my tears pouring out for giving her up.

Before driving off, I decided to get a picture of the two sisters as this might be the last time, they were together. 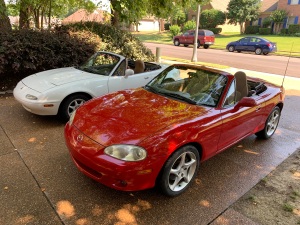 And on my way, I decided to get one more shot of her by the lake in our neighborhood… 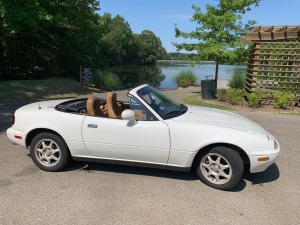 …as a reminder of another time 15 years ago when everything worked on her. 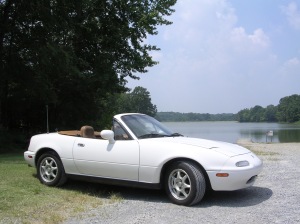 As I drove toward the fun little windy road near our home, I knew I would not miss the squeaks and rattles, but I would definitely miss her distinctive exhaust note. 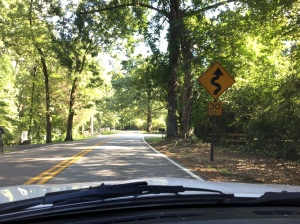 Once I got there, I decided to try to record the exhaust sound with my phone.  As I made my way around the curves, not even an inkling of the tie rod ends breaking could diminish my fun, my smile or my pleasure.  When I stopped, I checked my phone and sure enough I had captured seven minutes of sheer auditory bliss, our last together. 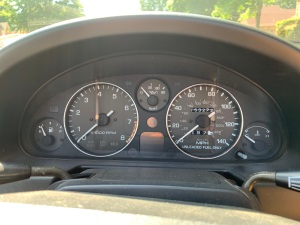 When I pulled back up to our house, I snapped a shot of her odometer reading and then realized I had only put 272 miles on her since that fateful day of learning her serious repair needs.

As I began to clean her out, I suspected she might be wondering what was going on as no one had cleaned her out in years.  I guess I felt a little guilty not clueing her in on what was going to happen next in her life.  But I suspect she knew something was up.

I went inside and filled out the donation form online.  That was on the Friday before Father’s Day and early Monday morning the tow truck arrived to take her away.  Just as he was lowering the ramp to haul her up, it began to sprinkle rain, heavenly sent tears to share with my own mourning. 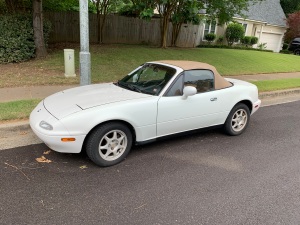 It was hard not to cry seeing her on the back of the trailer leaving our house for the last time, although the tears are flowing freely now as I type these words.  I can only hope she will find a new owner that can fix her up and have more years of fun driving with her.  Although she is gone, now anytime I tune into Car Talk, I will be reminded of her and all the fun years we had together. 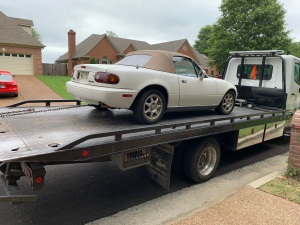 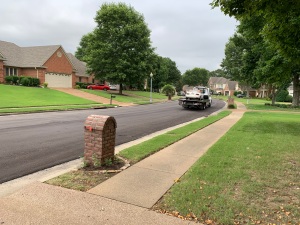 Until then, goodbye my fun little Marshmallow.

5 thoughts on “Finally, Time to Say Goodbye” Leave a comment ›

Leave a Reply to KikiCancel Reply