This may seem like an odd question to most people since their question in response might be: “Why does anyone need more than one car?”  But for those of us who are car lovers, having multiple cars dramatically increases our driving pleasure, especially when each car owned has its own unique characteristics.  For someone who has a stable of cars, this is what it is like—deciding among several fun options what to drive each morning. 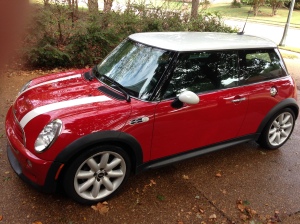 In 2013, I wrote a couple of blog posts about a Stable of Cars I was building and the reasons behind it.  First came the addition of a second Mazda Miata, then a Mini Cooper which at the time, gave me a choice of red or white or red and white for my morning drive to work.  Through a series of unfortunate events in 2010, that stable contracted but then expanded to four cars with the addition of a Fiat 500 in 2012.

Although one outcome of the decline was that the Mini became my wife’s daily driver, I still had the choice of two different Miatas or a hardtop Fiat to choose from depending on the weather.  Obviously, any nice warm day became a top-down day in one of the Miatas.  Any rainy day was a drive in the Fiat.  And whenever my wife and I went anywhere together, we would zip off in the Mini, with the delicious whine of its supercharged engine.  I recall the sheer pleasure on those rare days when I would have cause to drive all four of my cars in a single day.

Then my stable once again contracted when my youngest son needed to borrow the Fiat to provide a second car for his family in order to drop off his daughter at Mother’s Day Out.  The Fiat was eventually traded in on a more practical four door car.  Suddenly, I was down to just two Miatas again with no cold/rainy weather car option.  In the summertime, that was not a problem but, in the winter, cold weather and convertibles just don’t go well together.

In 2016, I finally remedied that situation with the addition of my Subaru WRX.  Now, not only did I have a cold weather car option again, but it was a blast to drive another car again that was not just naturally aspirated, a turbo this time.  This was a practical car as well as it gave me fun sports-car features with four doors.  And as I learned after a couple of trips out of town, it was comfortable enough to take on long road trips as well, something my two aging Miatas no longer were able to provide.

Of course, having four cars at home proved once again challenging with just a two-car garage.  The remedy was to park one or two of my cars at our mid-town condo.  While I was still working full-time, this was a good solution as the condo was so close to my work, I could run by there any day after work and swap out for one of my other cars to drive home.

But once I retired in 2017, trips to our condo became just an occasional weekend we spent there.  With two cars parked there, I now had to make a special trip over just to swap out a car.  In the winter, I had to make these trips over frequently enough to keep the batteries charged in the idled cars.  Turns out I didn’t make enough trips as over a three-year period, I ended up replacing the battery in both Miatas twice.

In fact, it was another dead battery issue in one Miata and the need for a new set of tires on the other that brought me to the realization that with the less amount of driving I was doing after retiring, I could no longer keep three cars in good working order.  This was no doubt compounded by the fact that one Miata was over 25 years old and the other was 18.

The action I took, as I recently posted, was to donate my 26-year old Miata to our local NPR radio station.

It has now been five months since that day, and I am relieved to say that my car life has actually grown less complicated.  I no longer have a car parked at our condo that I need to swap out regularly.  Both my Miata and WRX live at home and only one of them has to sleep outdoors. 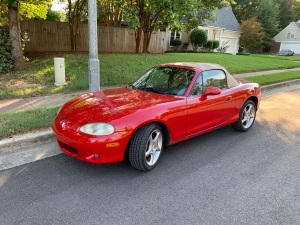 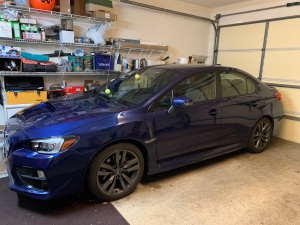 Whenever I need to drive somewhere, I have the choice of a fun convertible or a fun hardtop.  The cars each have their own unique characteristics which provide a quite different driving experience.  When I need to take my granddaughter somewhere, the choice is obvious as I need the four-door with the car seat in the back.

Over these months, it has been especially nice not having to make a special trip to our condo just to swap out a car, an hour-long roundtrip.  I know this will be particularly helpful as we approach winter and I no longer have to make these necessary “battery-saving” trips.

Of course, being a car lover, I always have my eye out for the next exciting model to come down the road.  In fact, through most of my adult life, I always had my next car picked out years before I purchased it.  And now with the proliferation of electric cars, a whole new category of possibilities has opened up.

But for now, I am enjoying the simple life of only owning two cars.  And with these fun cars, I have the means to give one of my grandchildren a thrill ride.

But I also know that one day, I will get to share with them the sheer pleasure of a top-down ride!

8 thoughts on “Do I Really Need More Than 2 Cars?” Leave a comment ›