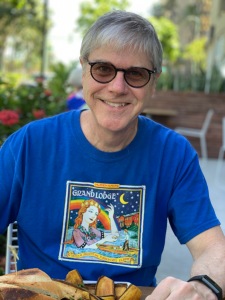 On this Sunday morning, I wanted to wish a particularly special Father’s Day to all dads.  It was a number of years ago that I last wrote about Father’s Day focusing specifically on my dad, myself, and my son-in-law who was soon expecting his first child.  But given what has been happening this year, I thought you dads, especially those with small children, like the moms I previously recognized, deserved a very special tribute as well.  And those that I particularly wanted to recognize are “my three sons”—my two sons and my son-in-law, the fathers of our five grandchildren.

The first father that I want to recognize is the first of my three sons to become a father—technically my “third son,” my son-in-law.  I have written before that my daughter could not have picked a better person to become her husband.  Having met while they were both pursuing Ph.Ds. at UC Berkeley, I learned after just a few encounters with him that he was absolutely the best man for “Daddy’s little girl.”

He was also someone I knew I could easily relate to as he was a fellow scientist, an out-of-this-world scientist, an astronomer. I confirmed this the time he and my daughter came to visit us before they were married.  It had been quite hot and the water in the pool had heated significantly.  When my wife asked us to pour ice cubes into the pool to cool the water, I looked at my future son-in-law and could just visualize the wheels in his mind churning as he calculated how many pounds of ice at 32 degrees would be needed to lower the temperature of 30,000 gallons of hot water by just a single degree.  We both smiled at each other knowing we had had the same thought.

Not long after my previous Father’s Day post, he became a dad for the first time with the birth of his first son, our first grandchild, a fine fella who will turn six this year.

Then two years ago, he became a father for the second time with the birth of his second son, another fine fella who turned two at the beginning of this year. 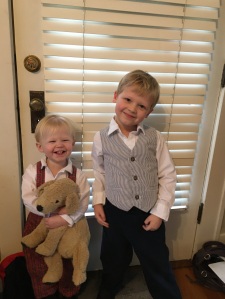 Next to become a father was my youngest son. 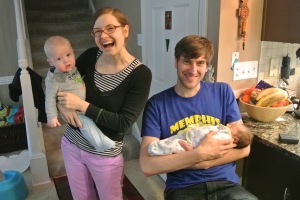 Exactly six months to the day after my daughter and son-in-law had their first child, my youngest son had a daughter and our first granddaughter.  Since she and her parents live in town, we get to see her quite frequently and she is often asking to have a “sleep-over” at Mimi’s house (Mimi being the affectionate name my wife is known by).  This fine young girl turned five earlier this year.

And our youngest son will also become a father for the second time later this year.

And third to become a father was my oldest son, who as I mentioned on my Mother’s Day post, was just 13 months older than his sister.  When his first child, a daughter was born, he now had a child 14 months younger than his sister’s first child.  Since they live on the west coast, we don’t get to see our second granddaughter as much as our in-town granddaughter so our visits there when we get to be with her are extra special.  This fine young girl will be turning five later this year.

And not that our oldest son is in any competition with his sister but the same year that our daughter had her second child, just four months later our oldest son became a father for the second time with the birth of his son and our fifth grandchild.  He also turned two earlier this year.

Being a father myself, although of an older generation, it is with pride that I have watched all three of my sons step into and master their roles as father and co-parent with their wives, while at the same time supporting their wives in their careers and excelling in the pursuit of their own careers.  Knowing that I missed a lot of our own kids growing up because of my work, I am very pleased to see how involved each one of these fathers are with their children.  I feel they have each set a perfect example of a great father.

I particularly wanted to honor these three dads this year given what I know they have gone through since February with all the Shelter-in-Place, Stay-at-Home, and Safer-at Home orders that have been implemented to stem the spread of the pandemic.  All of a sudden, in addition to the roles each one already had, they now became a stay at home dad assisting with their wives in providing not only care but education for their little ones as well.  And with all the statutes in place, they couldn’t even take their little ones out to a park where they would often go for outdoor activities.

We all have lived through these unprecedented times.  When things will ever return to some state of normalcy, no one knows.  But until that day comes, these dedicated dads will continue to provide the care and loving of exemplary dads.  These are very special dads and they deserve tremendous recognition for what they have done.

Thank you to each of you!

2 thoughts on “A Very Special Father’s Day!” Leave a comment ›