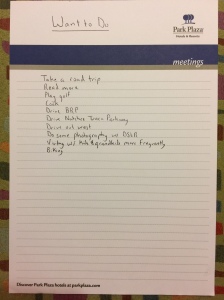 Two of the things that have been on my post-retirement “Want to do” list from last year are take a road trip and drive the Blue Ridge Parkway (BRP).  At the end of July, I got a chance for a small taste of both of these. 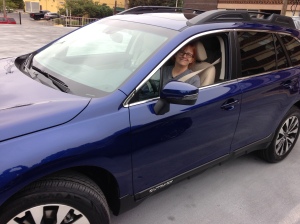 Now that my wife and I both have new cars but more importantly we have the time since I am also retired, I have wanted us to take a road trip together.  Typically when we have traveled in the past, we flew either because we didn’t have the time to drive or the distance was too far to go by auto (or a combination of both).  But neither is an excuse any longer.

The occasion for the road trip was we were taking my wife’s sister back home to North Carolina after she had been visiting with us in Memphis for almost two weeks.  And knowing that their home was not far from an entrance to the BRP, I came up with the ingenious idea that I could do both together.

For our first leg of the trip, the plan was to take a less direct route to her home and drive through Atlanta to spend a couple of nights there.  Knowing that I also had this desire to drive part of the BRP, I convinced my wife we should take my sporty Subaru WRX rather than her roomier (and probably more comfortable) Subaru Outback.  Fortunately it didn’t take too much to convince her. 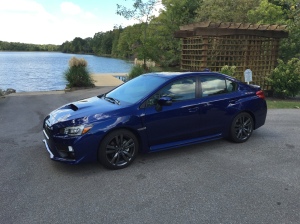 My reasons were two fold. First, I wanted to see how comfortable my car was on an extended road trip.  One day, I also would like to drive part of the old Route 66 and before I set off on such a three or four thousand mile adventure, I wanted to first make sure it was comfortable enough for a trip of about 1,500 miles. 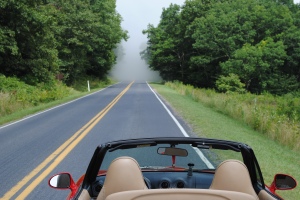 Second, I also wanted to drive the BRP in a sporty car.  When I drove it in 2010, I ultimately put over 2,000 miles on my Miata over a five-day period.  Afterwards, I suffered from a bit of back pain that took several weeks to recuperate. Since my Miata and I have both aged over eight years since then, I knew neither of us could handle the rougher ride.  And obviously taking a two-seater would never work for three adults anyway.

My wife might have had some concerns about being able to fit all of our things, her sister’s things, and the purchases she had made while in Memphis into my smaller WRX.  But here is the trunk all loaded up and ready for the trip. Everything fit nicely. 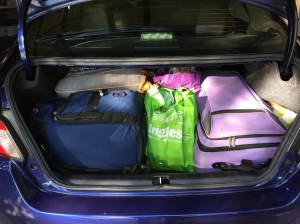 My most recent flights through Atlanta had each time been problematic either due to mechanical issues or weather; serious enough that I now try not to fly through there if at all possible.  Sunday afternoon, I found driving into Atlanta was no better.  As we approached downtown, we ran into what I considered San Francisco-like traffic—bumper-to-bumper and crawling along. I hate to think what weekday rush hour would have been like.

But part of the trouble was self-inflicted.  On numerous occasions throughout the day, the GPS in my car would suddenly announce “traffic jam ahead” when there wasn’t any.  When we did finally hit a traffic jam in Birmingham, it continued to make the same announcement over and over while we were still caught in it.  Finally, after so much “crying wolf”, I exited my car’s GPS and while crawling along the interstate pulled up Google Maps on my phone and hit the routing to the Atlanta Aquarium (which I knew was close by to our downtown condo rental).  Fighting through the unexpected traffic in Atlanta, I puzzled why the directions finally had us got off the interstate, clearly not in downtown and pull into a mall. Only later did I realize that in my haste on the road, I had routed us to a tropical fish store north of downtown, not the intended Georgia Aquarium.  So back into the traffic we went. 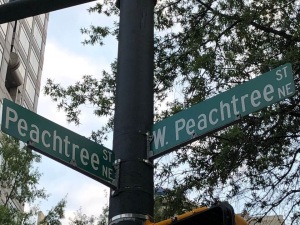 We finally made it to our downtown condo rental and after unloading our things; we headed to a brewpub for a well-deserved beer (or two)… 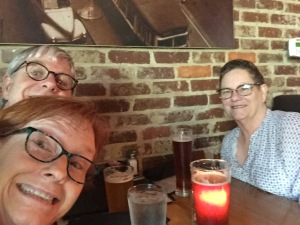 …followed by a beautiful sunset from our 23rdfloor balcony. 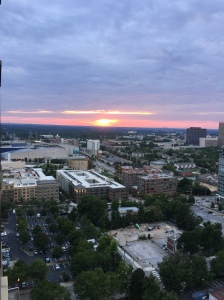 The next day, after enjoying a carefree sleep-in, the kind you only seem to get when on vacation, we strolled over to the Center for Civil and Human Rights Museum, housed in this dramatic-looking building close to Centennial Olympic Park. 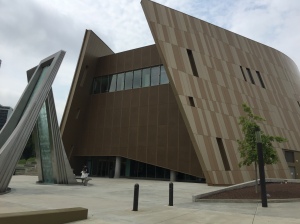 Only open since 2014, this museum tells a powerful story of not just civil rights struggles and achievements in the US but globally as well.  The US story compliments quite nicely the story told at the Civil Rights Museum in our own hometown but includes numerous exhibits about Martin Luther King, Jr. not available in the latter.  The top floor housing the global exhibits features not just historical civil rights violators and advocates, but highlights current issues globally and provides ideas about what you can do personally to make a difference.  It is all well done but in some parts, prompts a heavy emotional response. 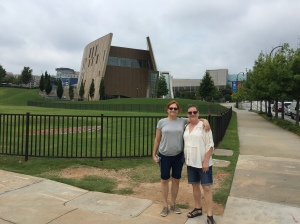 We realized that we could have stayed much longer as there was a tremendous amount of reading available but hunger won over and so we headed to our second brewpub for a late lunch.

That night, our last in Atlanta, we ascended to the top of the Westin Peachtree hotel to view the sunset while enjoying some adult beverages.  Only problem was the rain and clouds that had rolled in late in the day obscured the sunset until almost the last moment.  But the beverages were still quite good. 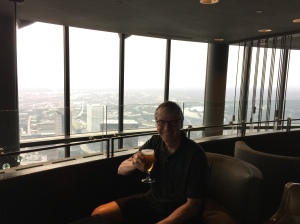 The next day, having driven through heavy rain off and on most of the day, we completed our mission of returning my wife’s sister to her home in Winston-Salem.  That night, I set out my clothes for the next day as I planned on getting up very early for the next leg of our trip, a solo drive on the BRP. 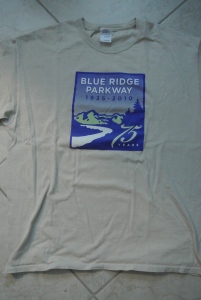