Over the Labor Day holiday, my wife and I went out of town for a weekend getaway. Although we had both been on a number of trips since January, this was the first time this year we were out of town by ourselves. My wife had booked us a cabin at Natchez Trace State Park and we were both looking forward to it. But ultimately it didn’t turn out exactly like we thought it would.

The week before the holiday, our in-town granddaughter came down sick. On Thursday and Friday, we kept her so her parents could focus on their school studies as well as catch up on some of their lost sleep while she was up at night. I had taken a half day vacation that Friday but rather than leaving town after lunch like we planned, we both helped with caring for our granddaughter. We ended up not leaving town until 7:00 PM that night.

Fortunately, the state park is only about 100 miles away so even leaving as late as we did, we still didn’t have that far to travel. But once we got off the interstate and away from the traffic, we found it to be very dark. Even with the hi-beams on, the winding and narrow two lane road was a challenge in the almost absolute dark.

We’d actually been to the park once before a number of years ago so I was somewhat familiar with the route to the lodge. But this time we were staying in a cabin which was off in another direction. When we finally found the cabins, the next task was to figure out which one was ours. We eventually discovered the cabin number was on the door and so we found our #6. When we pulled into the parking spot for the cabin, I realized that I was still in the road so I backed up to do a better job of parking.

Even with the car’s back-up camera, I couldn’t see that the retaining wall was not straight but rather angled back towards the road. This I discovered when we heard a loud crash backing up. When I inched forward, the wall caught the wrap around bumper and pulled it off. Fortunately I was able to pop it back on with a few strategic blows from my fist.

The next morning in the daylight, we could see from the outside that the cabin was quite small.

And on the inside, I laughed to myself when I realized that it was actually smaller than our 670 square foot condo. Even more surprising was the size of the cereal bowls in the house, scaled appropriately I guess for a small kitchen. 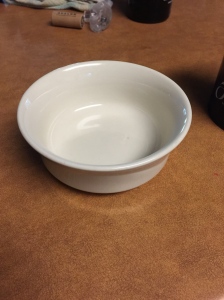 I really felt like Jethro (from the Beverly Hillbillies) when I had to mix up and eat my breakfast out a cooking pot. 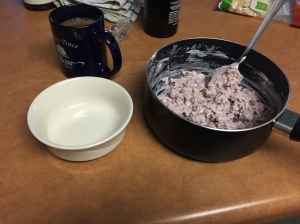 But the cabin was big enough for a weekend and it was cutely rustic. 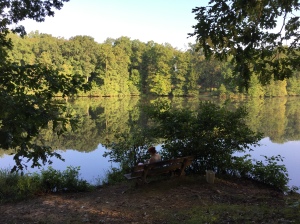 On the back, there was a nice porch overlooking the lake and a bench at the water’s edge where we could enjoy our coffee in the morning. However, our relaxing first morning was cut short when my wife recognized that her own health had deteriorated over the week and had fulminated into a full blown sinus infection. So rather than hiking on some of the trails we had planned to take, we drove into Jackson (fortunately only about 40 miles away) where she could go to a minor emergency clinic. With diagnosis confirmed, a sinus cocktail shot administered and antibiotic in hand, she felt like she could begin her road to recovery.

As long as we were in Jackson, we decided to eat lunch at a pizza restaurant that served craft beers. Followed by a visit to a thrift store, an excursion my wife always enjoys whenever we’re out of town. Successful finds were toys and clothes for our grandkids.

When we got back to the cabin, I decided I would take that hike we’d missed earlier. But by then, it was quite hot and so I hadn’t traversed very far before I starting sweating. I soon made my way back to the cabin for some indoor reading in the cool. That night, we went to the lodge for dinner where there were all kinds of good southern fried foods, just not much healthy. Upon returning to our cabin, we saw we had missed the sunset over the lake and so decided we would have to catch it the next night, our last night at the cabin. 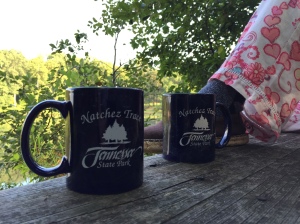 The next morning, we once again enjoyed our coffee down by a perfectly calm lake. 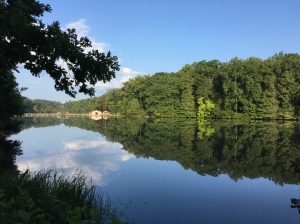 After lunch, we decided to go back into Jackson for a coffee and to pick up something for dinner so we could catch the sunset on our lake. Little did I know that my wife also had an ulterior motive—to go to Once Upon a Child, her favorite store for getting gently used toys and clothing for our grandkids.

Back at the cabin, we took one more of those late afternoon hikes, this time so my wife could capture some photos. 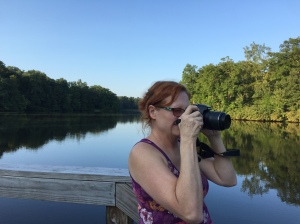 But again the heat got to us and we cut our adventure short. 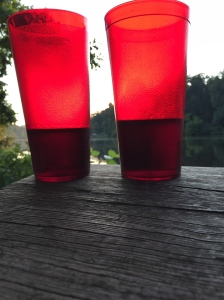 After dinner, we took a glass of wine in these “fancy” cups down to the bench to wait for the sunset. I decided I wanted to get the exact same shot I took in the morning but with the sunset lighting instead.

Sadly, we weren’t rewarded with the beautiful colors we thought we’d see but it was still quite peaceful and we had the symphony of summer cicadas to serenade us.

The next day when we were packing up to leave, I was most thankful that we had driven my wile’s Subaru Outback. Just a year ago, she was driving a Mini Copper and me, a Fiat 500, neither of which would have accommodated all of her treasures.

As we made our way back home on the interstate, I quietly reflected on our weekend getaway. Certainly it was not what either of us had anticipated several weeks before when we made our reservation but it wasn’t disappointing either. Actually, it was a most relaxing time of not doing very much. And with all of our down time, I almost finished reading an entire book which is something I never get to do. As the Rolling Stones song goes, “you can’t always get what you want”, but if you try, you can “get what you need.” And the relaxing weekend we got was exactly what we needed!