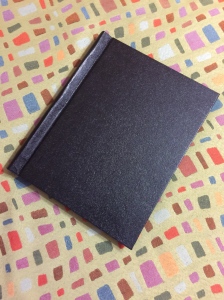 Not long ago, I wrote about discovering a book of some of my Dad’s sermons. At that time, there was one in particular I wanted to read; one that I still had vivid images of the story about which it was written. Having read that one sermon, I knew one day I would need to take this book back off the shelf and read more sermons. That day came this year.

I can’t recall what was the motivation for taking down that hand-bound book again; maybe searching for another book and spying it once again; or maybe it was wanting to feel closer to my dad as I approached the anniversary of his death. But whatever the reason, I opened it with renewed interest. 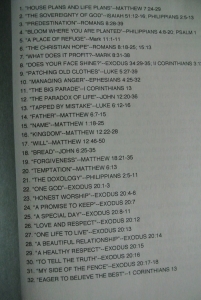 I again read down the list of sermon titles to see if any struck any memories with me. None did. So I decided that I would simply read them in the order in which they were listed on the page. And by reading one every week, just like how they would have been delivered so many years ago, every Sunday morning, it would take me 32 weeks to finish the book.

I also decided to read the scripture passage accompanying each sermon, as I knew the Bible verses would play prominent in the lesson. 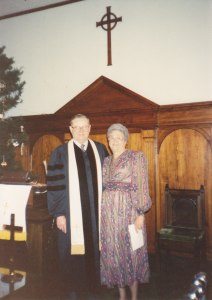 As I began to read, I often pictured my dad in the pulpit as if he were alive today delivering the message. 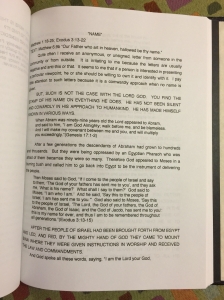 One of the first things I noticed was that part of the text was typed in all capital letters. I recalled whenever Dad gave a sermon, that there were times when he spoke directly to the congregation without looking down at his notes. And at other times, I could see that he was likely reading directly from his text. I wondered which portion of his text he read from and which he spoke gazing out on the people sitting in the pews. Since reading all caps is more difficult for the eye, I assumed these were the times when he would paraphrase whatever was written without looking down.

As I read each sermon, I wondered what era it might have been written in—what was currently in the news or on people’s minds. Occasionally there would be reference to a current event that would peg the timing of when it was written. But for others with my dad having served for over 40 years, it was a message that could have been written in any decade. 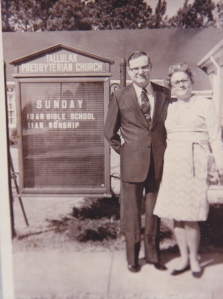 As I finished reading each sermon, I looked ahead to the topic of next week’s sermon. It reminded me of how at some of his churches, there was a sign out front announcing the title of the next week’s sermon. While growing up, I can’t say I necessarily looked forward to going to church each Sunday.   But as an adult reading these over 14 years after his death, I very much looked forward to reading the next sermon.

In fact, as I finished reading the sermon each week, I found myself wanting to continue to read. But I didn’t let myself because I knew if I did, I would be disappointed when there was none left to read.

As I read each week, I recalled growing up that sometimes while I was listening to my dad’s sermon, my mind would begin to wander thinking of other things. When this happened, I would totally miss what he was saying and was always disappointed in myself for not paying more attention to hear his message. I would tell myself that I would have to do a better job of listening next Sunday. But by having the text in my hands, even though sometimes I would picture him in the pulpit saying aloud the words I read silently, I could go back and reread any of his words I missed or for added emphasis.

Then one week when I was reading, I came across a footnote at the end of the sermon entitled “The Paradox of Life.” It said:

This is one of my earliest sermons. I preached it more than any other. I preached it Sunday, April 25, 1948 in Cameron Texas when I met Gladys. After spending much of the day with her and friends, I returned to Austin Seminary and told my roommate: “I met my future bride today!” and so it proved.

I got chills when I read this from the recognition that these were some of the first words my mother ever heard my father speak, captured for perpetuity. I wondered if each time he gave this sermon, if he too thought about the fact that it was his first sermon heard by his wife, my mother.

The other realization I had in reading this note was that Dad gave his sermons more than once. Given that he had served at four different churches while I was growing up, it never occurred to me that he could have given the same sermons to the four different congregations. It was a surprising realization in spite of the fact that I teach the same topic over and over and have done so for almost 20 years, fine tuning my talks, but relaying essentially the same message each time.

About half way through the sermons, I came a cross a series of eight sermons on the Lord’s Prayer. The first sermon was on the beginning of the “Our Father” and the last was on the doxology (“For thine is the kingdom…”), a conclusion that was probably added by the church in the second century. In between was a separate sermon for each of the six petitions in the prayer.

Reading these sermons, I had no recollection of ever hearing them before. I don’t know if it is because these were written before I was born or once I was long gone out of the house and on my own. But whatever the reason for my unfamiliarity, I now particularly looked forward to reading each of these over the eight weeks.

I had never studied the Lord’s Prayer in any detail so it was wonderful to get additional insight into each phrase. For many Christians, this is a prayer we pray throughout our lives and for me, one that I have prayed every single day for as far back as I can remember. But now, each morning when I say these well-known words, I say them in a new way thinking of my dad and the lessons he left me about it.

Once I had read the last of the 32 sermons, it was sad to close the book knowing that there would be no sermon to read the next week. For more than half a year, Dad’s words were a part of my weekly routine. Not that I don’t think of my dad often but this proved a particularly special time each week when my thoughts of my dad were influenced by his own words. Serendipitously, I read that last sermon just a week ago. Just in time for his birthday this week, the one on which he would have turned 90. 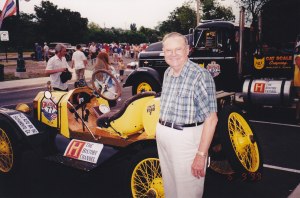 And just like when he was still alive, when it was the rare occasion to see my dad getting a birthday present, this year on his birthday, he has once again deferred receiving a gift for giving one instead, to me, in the form of these sermons.

Thanks Dad, it was a wonderful gift! Happy Birthday to you!