I thought I would start out the New Year as I have done before reflecting back on the trips we took in 2016, some of which I wrote posts about last year (linked below if you are so interested to read more details). When I started this post, I didn’t think I had taken that many trips but when I started recalling them all, I discovered that I had actually taken more than I did in 2015.

Often times, our first trip is very early in the year—right after New Year’s Day—as we are coming back from our friend’s cabin in Boone, NC after ringing in the New Year with them. But this year, our friends had the cabin up for sale so we didn’t make that trip. So my first trip was actually not until March when I went to New Jersey to teach my Validation course. It was strictly a business trip with no time for site seeing.

Then in April I actually had three different trips so it was a busy travel month. First up was a business trip to Washington, DC but again there was no time for site seeing.

Then in the middle of April, I was off to Amsterdam to teach my Validation course again. Fortunately for this trip I was able to tack on some actual vacation days on the front end for a very nice visit, even though I was alone on this trip.

On the last day of April, I was off to New Jersey again, this time to teach my Stability course. Before the course began, I visited Ellis Island and the Statue of Liberty for the first time. It was truly amazing touring both.

In the middle of June, I traveled to Richmond, VA to teach my Validation course for a third time this year. It was a very short trip and thus no time for site seeing.

At the end of June, we took our really big family vacation to Montreat, NC, the one we had been planning for over a year. It was a very enjoyable weeklong visit with 15 family members, including two of our three grandchildren.

Through July and August, we stayed home suffering through the summer heat of Memphis and then over Labor Day, rented a cabin at the Natchez Trace State Park for our first trip by ourselves all year—a trip long overdue. The only down side of this trip was that we were both sick which prevented us from doing some of the things we had wanted to do. 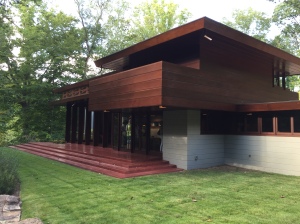 At the end of September, I took a quick weekend trip over to visit my sisters in Northwest Arkansas. It was nice chance to get to visit with them, take my first road trip in my new WRX, and to explore the Frank Lloyd Wright house that has now been relocated to the grounds of Crystal Bridges. 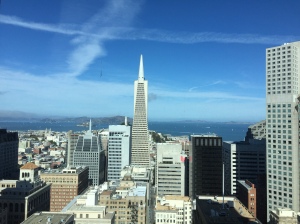 October found us in San Francisco for our annual trip there for me to teach. This year, I actually had both my Validation and Stability courses scheduled just a week apart so between courses, we had four days to visit with our oldest son, his wife, and our youngest granddaughter. An added treat for me this year was to get to visit my son’s office—with a great view of downtown San Francisco—and learn about the work he was doing there. Prior to heading in to his office, we got to go onsite to a major redevelopment project his firm is working on at a former sports complex.

My last trip of the year was another quick trip, this time a weekend trip just before Thanksgiving out to LA to visit my daughter, son-in-law, and grandson.

Although an ulterior motive for me was to go to the LA Auto show, …

…my main reason for going was one last chance to visit with them in Pasadena before they moved out of the area in 2017. It was doubly sad this time driving away on Sunday afternoon leaving all three of them there knowing that the fun visits we have had there over the last five years were coming to an end. However, this sadness was tempered somewhat with the knowledge that they were moving to another really cool place that we would certainly visit in 2017.

So if I’ve done the math right, I had a total of ten trips in 2016, not a huge number but certainly some very special trips. With my planned retirement later this year, I should have even more time to travel in the future. And with the extra time, we should be able to even take some extended road trips to see parts of the country that neither my wife nor I have been to.

So cheers to another fun year of travel in 2017!