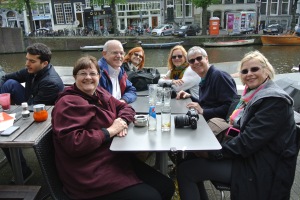 I knew it would be a different trip to Amsterdam for the annual teaching of my course there this year. Last year’s trip, had been an extraordinary visit as it was where my siblings and I had celebrated SIBSAB 2015. And just before my siblings left to tour Belgium while I taught, my wife and her sister joined me for a continued special time. But the more I thought about my upcoming excursion across the pond to the low country, the one theme that kept coming up was that I would be all alone on this trip.

While it would have been nice to have a repeat of the trip last year, it just wasn’t destined to work out for a number of different reasons. And even when family doesn’t travel with me, I typically take in some sightseeing with the person that I teach with. But this year, his entire family would be joining him for a European vacation so I knew he would be busy doing things with his family, just as I was busy with my family last year.

As I considered different activities that I could undertake while in Amsterdam, I had a wealth of prior experience to draw from having previously visited Amsterdam more than 25 times. 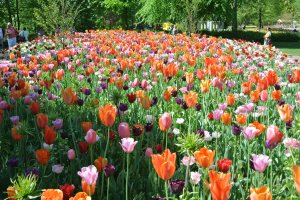 We had arranged the dates of the course to fall right in the middle of the tulip season so his family could enjoy the beauty of Keukenhof. As I ran down a list of the things I could do, this was certainly one, which is typically an all-day excursion to explore their seven million bulbs in bloom. But I was just there last year with my siblings so there wasn’t a strong reason to return so soon. 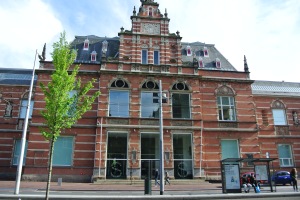 I checked online to see what special exhibits were on at the major museums: the Rijksmuseum, the Amsterdam Historical Museum, The Stedelijk Modern Art Museum, and the Van Gogh Museum. Each one held some possibilities.

I also considered taking in one of the things my wife had done on her own while I was teaching in years past, or possibly taking a side trip from Amsterdam to visit another part of Holland, which we had done before. Having been to Amsterdam so many times and having taken in many of the top tourists sites, I further considered doing something totally new and different. But in the end, I decided to just wait until I got there to see what I felt like doing at the time.

My trip over went very well. In fact for my flight from Detroit to Amsterdam, I had a window seat and the seat next to me was vacant.   I had considered spending the extra $150 to get their economy comfort seat—you know the ones that used to fill the plane—but I’m glad I didn’t as I had more room with two seats at no cost to me. But in spite of the extra room, trying to sleep in coach on an overnight flight is never easy. I think I might have gotten about three hours of sleep.

By the time I got off the plane, I was wide-awake which was a good thing because the airport had changed again. Last year, I was all set to be a knowledgeable tour guide for my siblings but was immediately met with construction in the airport that hid all my familiar landmarks behind wooden panels. This year, the panels were all down but the revealed new construction was so different, that I was once more disoriented. And when I went to the usual passport control I knew so well, it was closed for renovations. I did manage to find the alternate route out of the airport but when I exited the secured area, everything looked different. I decided to at least try to orient myself in the airport with one of my favorite stores, the model airplane store. After some diligent searching, I managed to find it but then realized the reason everything looked so different was because I had come out a way I had never taken before. 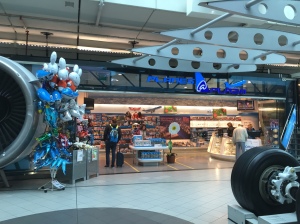 Undaunted, I decided to try to take the train to Centraal Station using my ChipCard—the card you use to ride the tram—since I was told you could use it on the train as well. It didn’t work. I had to then stand in line to get a train ticket agent to help me. She scanned it, showed it had a 22-euro balance on it, typed some keys and then said it would work. It did but I don’t know what she did to make it work. Oh well.

Once I got off the train and walked the short distance—in the rain—to the hotel, I was pleased to find that I could check into the room even though it was only 11:45 AM. Often I cannot get into my hotel room until 3 or 4 o’clock in the afternoon so it was a welcome site to open the door to my converted canal-house room. 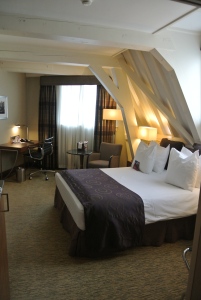 Since it was about 5 in the morning to my body, it was nice to be able to get a cup of strong coffee, a shower and shave and clean clothes on before I ventured out. 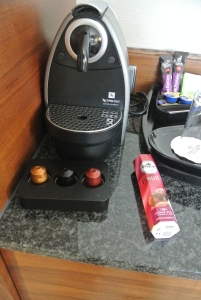 First stop was lunch. I decided I wanted to go to the same Turkish restaurant where I had eaten with my wife and sister-in-law the day I met them last year. 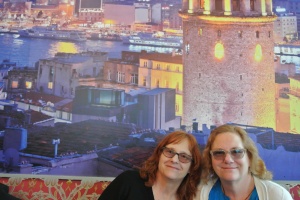 I couldn’t find it, no doubt because I was sleep deprived. I did remember how we got to it from our hotel last year (I am actually very good at remembering how to get somewhere once I have been there once) so I made my way to our hotel last year. Following our tracks from last year, I easily found the restaurant, appropriately named Istanbul, but was pretty embarrassed when I realized that it was actually right next door to my hotel this year. 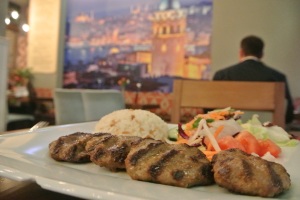 I enjoyed one of their lunch specials as I gazed up at the same mural on the wall of the Galata Tower with the Bosphorus and historical Blue Mosque in the background, but missing my companions from the prior year. While I was eating lunch, the weather helped me decide what to do next. Since it rained off and on quite hard several times, I decided I would quickly walk to the Amsterdam Museum (previously the Amsterdam Historical Museum) since it was very close by. I was still able to use my Museum Card from last year (it was good for 12 months) so my admission was free. While the permanent exhibits were familiar since I had just seen those last year, there was a special exhibit of 100 years of art in Amsterdam that was new.

Before I left the museum, I decided to take advantage of the free facilities since these are not common in the city. 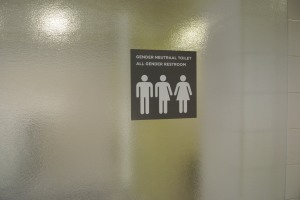 I learned that their bathrooms had been converted to “Gender Neutral” (Amsterdam is very liberal and progressive). When I came out, I realized that I had actually gone into what was previously the women’s bathroom by mistake as a glance through the door of the other bathroom revealed urinals on the wall. Oh well…