When I started this blog eight months ago, I made a list of all the things I would want to write about.  Many of the titles on my list were things I wanted to share with my children before I lost the details of the memory.  This is a title that has been on my list for quite a while because I knew it would be difficult to write since it dealt with death, a topic none of us really like to think or talk about.  But since my dad would have turned 87 years old this week on “Hop Over the 11th” as he would call his birthday when he was little, this seems like a good time to share this story.

Growing up, my most common memories of my dad were whenever our family was on vacation, which was always a wonderful time.  These memories stick out most because during everyday life, my dad was busy as a full time minister, a profession that took him out of the home many days, nights, and every weekend.  My mother used to say sometimes Dad was married to the church and he was very dedicated to the members of the church and ministering to their needs.  So it was on vacations when he wasn’t working that we had much more time to spend with him and get to know him.  But there just never seemed to be enough vacation time to get to know him really well.

As an adult, I thought I might get that chance when after I had been married for about 10 years, my dad retired.  Having served the Presbyterian Church for over 40 years, his last “official” Sunday service as a full time minister was on New Year’s Eve 1989.  Since we had a two-year old son at the time, my wife stayed home with him and I drove our two oldest children down to Louisiana to be a part of the service and the celebration afterwards.  It was a proud moment and a significant milestone.

With Dad relieved of his full time responsibilities and his weekends now free, he and Mom could travel more often and they would come to visit us more frequently.  Seeing their grandchildren growing up and the life that my wife and I were building, Dad would frequently say how proud he and Mom were of me and us, comments that always made me smile and appreciative of the recognition.  These trips continued until Mom’s health deteriorated and she was no longer able to easily travel due to regularly scheduled dialysis sessions.  Complications from her diabetes ultimately took her life in April 1999.

While it was a terrible loss to lose Mom, the silver lining was that Dad could now travel freely again and I thought, as my three siblings did, that we would get a chance to know Dad better.  Sadly not long after Mom died, Dad discovered he had melanoma and so began his battle with cancer.  My thought at the time was that as he was spending so much time helping Mom through her poor health episodes, that he ignored signs of his own health deteriorating.  It brought back childhood memories of how he had served his church before his family; only this time it was himself that had come second.

In early 2002, we learned his cancer had spread dramatically and that he had very little time left.  We quickly arranged for a celebration of life with Dad the first weekend in March.  All three of my siblings along with spouses and significant others and many of the grandchildren gathered around Dad in his hospital bed.  It was a sad and joyous time. 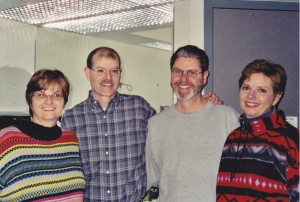 I drove home that Sunday night and returned to work on Monday.  Wednesday morning, I got a call from my sister that the doctor had told her that Dad was in a grave state.  I was stunned.  I just couldn’t believe his health had declined so quickly.  It was as if the weekend had zapped his remaining strength or else he realized it was his time to go. I debated what to do.  I learned my brother was making arrangements to fly back that day having just flown home the day before.  As I write this, I cannot recall what helped me decide what to do.  I know I was in the middle of a big project at work and I was conflicted between work obligations and family needs—just like Dad probably was on more than one occasion in his life.  I made up my mind to go and so left work after lunch and drove over.  It turned out to be one of the most important decisions of my life.

I got to the hospital around 5:15 PM.  My two sisters and brother were already there.  When I came into the room and said hi to everyone, my Dad’s labored breathing all of a sudden became much calmer.  I learned from my sisters that he had been comatose with difficult breathing throughout the night and day and that they had sung hymns to him during the night so he would know they were by his side.  It was as if when he heard my voice, that he knew all four of his children were with him now and he didn’t have to struggle to hang on any longer.  All four of us gathered around his bed, held him, and talked to him.  And it was with the four of us around him, that he took his last breath less than 45 minutes after I had arrived.  If I had been delayed in my drive over by that much time, I would have missed him.

Although it may sound morbid, few people can say that they have held someone as they died; even fewer can probably say it was one of their loving parents that they held during their last breath.  But for my siblings and me, it was the Dad that each of us knew loved us dearly—the Dad that we didn’t get to know as much as we hoped who was now gone.  It was a tragic loss but being with him as we were when he died, it was a life experience of tremendous significance.  Sadly, I can recall us discussing at dinner later that night that with both Mom and Dad gone, we were now orphans. 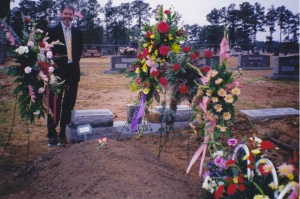 So it was at the same church, in the same cemetery, less than three years after Mom passed away, that we were burying Dad.  At the reception after the funeral, I vividly recall being amazed at how many people came up to me, people I didn’t really know, saying what a tremendous help Dad had been to them during some difficult time.  It was as if all those times when my dad was gone doing church business, was taking on a life for me in the person he had helped.  There was nothing but kind words and praise for how Dad had helped them.

It has been over 10 years since my dad died and often I have thought about that day.   Recently someone asked me who is the male person I most admire.  At first, no one immediately popped into my mind and I had to give it some thought.  But the more I thought about it, the more I realized that it was my Dad who was the one I admired most.  It is my dad for whom I always smile whenever people say I am the most like Dad.  Because without knowing it, it was he who I most emulated in my life, trying diligently to be a kind and loving husband, parent, and sibling while at the same time, being a hard working, dedicated provider for my family.

My only regret, the one that still grieves me and the one that causes tears to drip onto my keyboard as I write this, is after finding out all of those wonderful stories of how Dad helped and ministered to so many people, that I couldn’t recall ever telling Dad how proud I was of him.  But as those stories were being pinned on me that day like bereavement ribbons, that was all I could think of; but it was too late.

Since that day, I have said those words standing in front of his gravesite but I know that I was only saying them to an image of my dad in my mind’s eye.  So now I am saying it out loud as I type this, DAD I AM SO PROUD OF YOU!  But even if I didn’t say those words to him while he was still alive, he probably knew anyway because he could see much of himself in me.  So when he would say how proud he was of me, I was actually reflecting it back to him, not in words but in actions, because what better way to tell someone how proud you are of them than to choose to live your life like them—like my dad.

17 thoughts on “A Glimpse of My Dad” Leave a comment ›