Today marks seven years that I have been blogging with my first post having been published on February 9th, 2013!  Never in my wildest dreams did I imagine I would still be blogging seven years later having come to you for a total of 364 weeks, always publishing early on a Sunday morning.

So why Sunday morning?

Well it is in honor of my dad. He was a Presbyterian minister and for over 40 years, he brought his message to his church members on Sunday mornings.  My dad touched many lives during his lifetime, not just in his Sunday morning sermons but in the many things he did to serve his church, a life for which I am most proud (A Glimpse of My Dad).  So, I thought I would try to bring my messages to you in the same tradition, every Sunday morning.

Also, in honor of my dad, I am on a multi-year mission to read every one of his sermons he wrote, all 759 of them.  These were thankfully saved by my oldest sister as recounted here.  I am up to just over 300, not even halfway yet, so I still I have a long way to go but my 363 blog posts (plus my first guest blog post last year) have at least put me in his same league, although still well behind him.

I have written before that I keep a list of topics to write on, now over 275 long.  In the early years, I maintained this list so I would not forget an idea that came to me even though I might not have time to explore it at the time.  Of late, it seems that I add a new blog topic to my list only after I have written it (I am an avid list maker) using the strike through feature as I type (my indication I have covered that topic).

In fact, I have now blogged for so long (or it could be old age), as an idea comes to me, I have to first look to see if it is one for which I have already written a blog (funny story, I actually wrote on celebrating New Year’s twice without realizing it until I found another file on my computer with a similar name.  Fortunately, it was different enough that I could still publish the second one).

I have written before that often times I have concerns about being able to come up with blog ideas to continue to write on and publish.  And last year was no exception.  To share with you some of my mechanics, I actually keep a handwritten list of topics as I write them and schedule them with the Sunday date on which they will publish (I am, by nature, an early starter and usually like to have several weeks scheduled out in advance).  To the left are already written drafts ready to schedule if I run short of new topics. 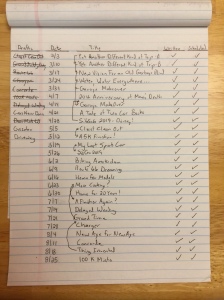 As you can see, I do juggle things around somewhat when I want a certain new topic to publish ahead of one already scheduled. 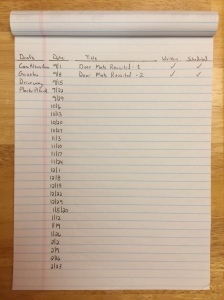 When I finished this page and turned to the next blank page to list the next six months of Sundays, I was quite intimidated to think that I had to write another 25 or so to reach this seven-year milestone.  But I did it!

But enough about me, now for the most important persons, who were it not for your dedicated reading, I would just be writing a private diary.  It is very special to me knowing you consistently read my posts.  Thanks for your continued interactions, your thoughtful comments, and even your occasional suggestions about a topic.  Knowing that you are connecting to me through these posts continues to be an inspiration for me to continue this effort.

And to my new readers as well as occasional readers that found my site last year, while every topic I write about may not have been of interest to you, it is still rewarding to know that you are enjoying even one or two.  I never got into this for the “numbers” so know that each and every one of you are appreciated.

So, what of 2020?  Well one thought I have been thinking of doing is going back and reviewing my previous posts to see if there is something more that I need to explore or if an update is warranted as some of them were written so long ago.  Case in point, as I was first drafting these words in late November (I told you I was an early starter), out of the blue, came an idea offering the potential for a whole new perspective on my dad, a thought that occurred by writing some of the words about him above.  But just so, you know, I promise not to publish reruns.  Nobody wants those and besides since they are all online, you can go back and reread any that you want.

So in closing, as most of you already know by now, I love cars and love to drive and have often used these rides as a metaphor for my posts.

So, thanks for coming along for the ride so far.  I hope it will continue to be an enjoyable journey for you. 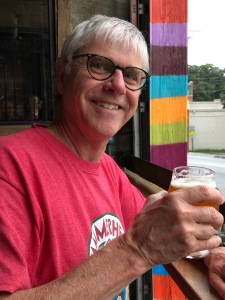 Here’s to another fun year.  Cheers!