Earlier this year, I wrote about a winter trip to Seattle to spend time with my daughter and two of my grandsons.  At the end of the week while assembling an airplane model for my oldest grandson, I had a huge aha moment when I realized that I had just put together my first model with one of my grandchildren.  It was an exhilarating epiphany to think that I could once again enjoy that fun activity from my childhood with my grandchildren. 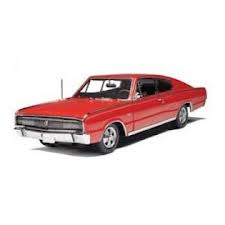 About six years ago, I wrote a series of blog posts about how growing up, I used to love to build models. In the first of three posts, I relayed that at the age of nine, I assembled my very first model—a 1966 Dodge Charger.  It launched for me what would become a lifelong thrill of building models.

Recently, I had one of those serendipitous moments when my childhood memories came rushing back to me.

The occasion was I had gone to a local hobby/craft store to get a picture framed.  As I was finishing up my selection of frame and matting, I could hear on the building’s metal roof that the light rain that had ushered me into the store had suddenly turned into a torrential downpour.  Not having brought in an umbrella, I decided to wander around the store to wait for the rain to let up.  I naturally was drawn to the row of models.  As I scanned across the nice selection of airplane, truck, and car models that were stocked on the shelves, I eyed a model of a 1968 Dodge Charger.  I excitedly took it down and began to look at it.

My hands trembled slightly as I looked at the picture on the box thinking back to my childhood.  Here in my hands was almost the exact same model I had put together over 50 years ago.  Surprised at the $29.99 price tag, it was only a moment’s hesitation before I knew I had to buy it (I think the original model I bought in 1966 cost $2.00).

The first step before assembling a model is to buy the paint and glue needed.  Fortunately, having built a Mini Cooper model several years ago, I still had much of the paint required.  But I still needed to pick out a body color.

I recalled the 1968 Dodge Charger that pursued Steve McQueen through the streets of San Francisco in that classic chase scene from the movie Bullit but that car was all black, not an exciting color.  I didn’t paint any of my original 1966 car model I built (all virgin white plastic) so I wanted to make this one look special.  I decided to pull up the official paint colors for the 1968 Charger and selected the one I could buy in model spray paint that most closely approximated it—a deep metallic blue (which just so happened to also be the color of my first real car). 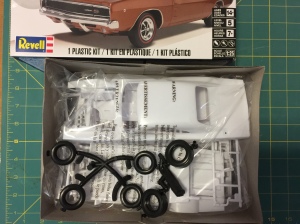 With excited child-like anticipation, I removed the plastic overwrap and removed the different part trees from the box. 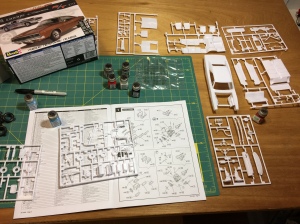 As with every car model I have ever built, the first step is always assembling the engine, so I began to paint the parts the letter-coded colors indicated in the directions.  Since the parts were so small, I decided to paint other parts as well to speed up the assembly process.  I anxiously waited for the paint to dry so I could begin putting it together.

I found as I began to assemble the model that not all of the pieces fit precisely together.  In fact, after gluing a few, I had to take them back apart once they had dried when I found that other pieces would not fit properly. It seemed like four or five pieces had to be glued simultaneously to ensure proper alignment, nothing of which was highlighted in the pictorial instructions.  It made me wonder if I had had this much trouble 50 years ago when at that time, I had no experience ever putting a model together.   And five decades later, I also found my eyesight was not as good for seeing up close and my fingers not nearly as dexterous for assembling the tiny parts. 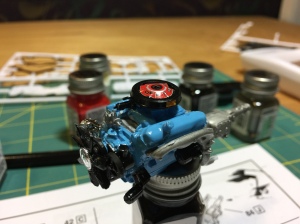 Eventually I was able to get the engine finished and I was off and running.

I recalled an aspect that always bothered me in working with this small of a scale (1/24) that some parts were not assembled the way a real car would have been manufactured.  For instance, without functional doors, piecing together the car interior is a little akin to building a boat with four sides… 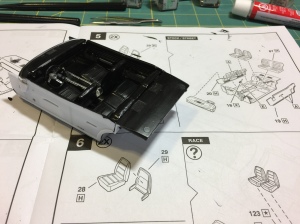 …that then slips up and into the car body.  Only in working with some of the much larger scale models (1/8) did I feel I was actually building a real miniature car.

Another bothersome issue that resurrected itself had to do with painting the car body.  This part of the painting process was always my nemesis. When I first started building car models, I would try painting the car body with a brush but that always left unsightly brush strokes.  But even when I switched to spray paint, I invariably either under-sprayed leaving it slightly splotchy or over-sprayed it which applied so much paint that it then ran.

It is probably best that I didn’t try to paint that very first Dodge Charger when I was nine years old as the frustration, I would have certainly encountered, might have discouraged me from ever trying to build another one.  It was certainly the high-quality paint job that originally attracted me to begin collecting the 1/18 scale fully assembled model cars, foregoing the fun of building them in exchange for a superior body finish. 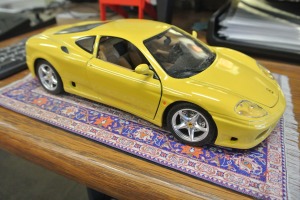 As I neared the final steps, I continued to struggle with the tiny parts, many of which were quite delicate. I found that the previously assembled front suspension had come loose and no matter how many times I tried, I could not get the hood hinges glued on correctly to allow the hood to close. 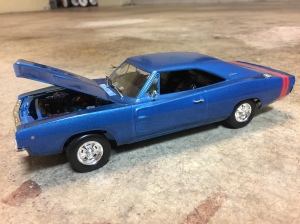 I briefly considered displaying it with the hood up since it would not close but decided just to take the hinges off and lay the hood on the engine bay.

So, in the end, neither my first Dodge Charger model nor this latest one over 50 years later was a perfect model. 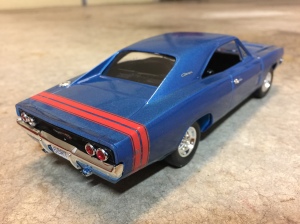 And while I certainly enjoyed assembling it, I think the challenges I experienced have cured me from ever wanting to assemble anything in this small of a scale again.

I will still display it proudly as this one has a unique story behind it since a Dodge Charger was my first and probably last model of this 1/24 scale.  It will sit right next to this black classic which models my very first sports car, a 1978 Pontiac Trans Am.

I have to admit that building this miniature car definitely rekindled my desire to build models.  But for my next modeling foray, I think I will once again return to building a larger scale model and work with something made of wood that is easier to paint.  Interestingly, it just so happens that dollhouses are made of wood and come in a much larger 1/12 scale AND I know just the little person that will appreciate this as well.

2 thoughts on “My First Car Model Revisited” Leave a comment ›