On the list I made of fun things to do once I retire, I wrote “Cook.”  Maybe not necessarily works of art like the dish above but what I really meant with this one-word activity was to actually cook as opposed to just preparing dinner from mostly ready-to-use packaged food.  To motivate me even further, the last work anniversary gift I selected before retiring in the fall of 2017 was a nice KitchenAid mixer. 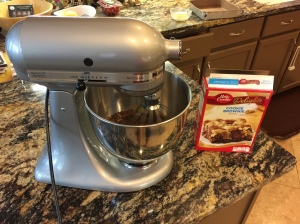 Sadly, so far, I have only used this to make a boxed brownie mix.

For all the years our kids were young, my wife shouldered the responsibility for preparing our meals. I of course performed the manly chore of grilling out (in the South we don’t call it barbequing; barbeque is a food, not a cooking technique).

After our kids grew up, to give my wife a break, I took over the main cooking duty.  But still working full time, I relied heavily on a lot of heat-and-serve type dinners rather than buying ingredients to prepare a meal from scratch.  And I still grilled out some of my favorite foods:  hamburgers, steak, and salmon.

So, thinking that I would have more time after I retired, I added cooking as a fun activity—a different kind of cooking than I had previously undertaken.

After more than 18 months, where has the time gone (a story for another time)?

Probably recognizing that I had not markedly changed my cooking style after retiring, my wife for Christmas last year gave me an Instant Pot to spur me in a new direction.

It is amazing what a useful cooking aid this device is.  It first took a rather tough pork roast…

…and turned it into a delicious meal. 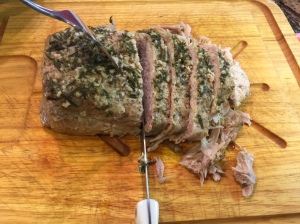 I also love carnitas but recognize the traditional preparation technique is rather laborious and time-consuming.  Not so in an Instant pot, carnitas can be done fairly quickly and mostly labor-free. It has become one of my go-to recipes for the Instant Pot.

It also does great green beans in about 2 minutes (following pressurization).

So, in spite of having nice new kitchen tools upon which to rely, it has actually been my health that has gotten me to do more recipe driven cooking like what I envisioned when I added cooking to my fun-to-do list.

After many years of enjoying the health benefits of being an active runner and routinely having a blood pressure of around 110/70, I began to see my blood pressure gradually rise as the years went by.  My doctor explained that in spite of my active lifestyle, my aging arteries and veins were no longer as flexible as they once were when I was younger.  Now in my 60s, I have had to resort to taking blood pressure medicine for the first time.

Interestingly when I first started with a fairly low dose, I found that my blood pressure was not reduced very much and so had my doctor double the dose.

With no kids at home, my wife and I have gotten in the habit of eating dinner out several times a week. I began to notice that after eating certain foods, I would typically weigh about a pound more the next morning and if it was a day that I also measured my blood pressure, it would be elevated as well.

Since I am a scientist, I decided to experiment on myself and soon deduced that sodium in the form of added salt (NaCl) was the culprit.  This discovery changed my eating out habits, but it also made me pay much more attention to the sodium content in many of the “ready-to-eat” meals that I purchased. I was amazed when I read their labels.

My hand was being forced; no longer could I rely on any of these foods.  My options: prepare many more of our meals from scratch and control the amount of added sodium.

One of my favorite ready-to-eat purchased meals was a chicken Florentine pasta dish.  I had one version I would eat for lunch and another for dinner. I found a really good recipe on line and this became one of my favorites to prepare.

It made enough for dinner and then I froze leftovers for several days of lunches.

I also loved to fix meat tacos but have now changed that to a much healthier ground chicken seasoned with a homemade taco seasoning that I also found online.  In preparing this seasoning, I cut the amount of salt in the recipe by 75%.

I still grill out a lot but have added pork and chicken instead of steak and burgers and I now pay much closer attention to the amount of salt I use.

I don’t think I have yet achieved what I originally envisioned when I wrote cooking down on my list.  Maybe this winter when I have fewer outdoor responsibilities (like weeding and pool maintenance) I can spend more time searching for good, healthy recipes to try. But I know I am at least launched in a better trajectory in the meals that I am preparing.

And if you have some good healthy recipes that you have discovered, feel free to send me the link.