The last week of June was a grand time for my wife and me—a grandchildren time that is!  Our daughter, son-in-law and their two boys came to town which meant we had three of our five grandkids together for the first time this year.  They arrived late on a Saturday night so our first experience with them was on Sunday morning at Mimi’s Café (Mimi being my wife’s grandmother name). 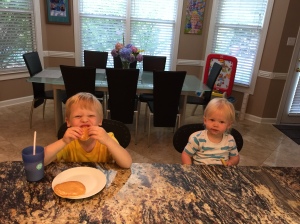 Other than attending Mass on Sunday and recuperating from their long flight to Nashville and their drive to Memphis, our plan was to get all three grandkids and all four parents together for a swim/dinner party.  Unfortunately, Mother Nature threw us a curve with an unexpected thunderstorm that forced canceling the swimming portion of the evening’s activities.

And to overcome some of the disappointment of the previous evening, our in-town granddaughter had a sleepover with us so everyone would be together Monday morning.

The morning started early (all three get up early) with breakfast and story time. 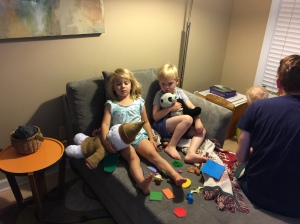 Then it was out to the pool for a fun early morning swim and much needed coffee for all adults by the pool. 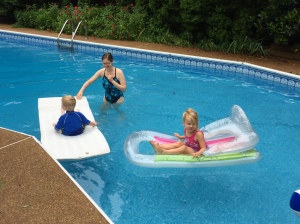 Then it was off to our favorite place, the Children’s Museum of Memphis (CMOM) where everyone had a great time… 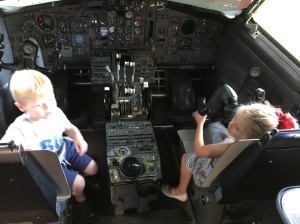 …before heading over to our son’s house for the kids to play in their backyard. 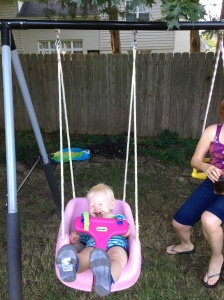 At the end of the day, we very pleased that the two oldest grandkids had played together so well all day. This hasn’t always been the case as when children see each other only infrequently as evidenced by this early encounter of the two. 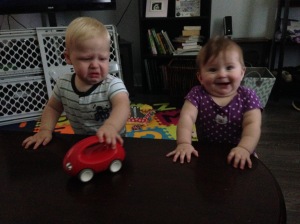 The next day, we first had to pose in our granddaddy outfits to replicate the photo I had taken with my oldest grandson on one of his first visits to Memphis.

Then after nap/quiet time, it was another pool party. 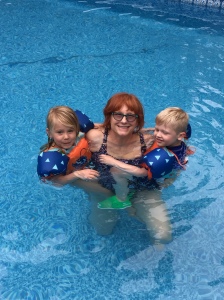 Mimi was ecstatic about the time she was having with the grands.

Wednesday, our daughter and her family had an enjoyable day at the Zoo while us grandparents took care of some business.  That night it was back over to our son’s house for another grandchildren dinner, this time with just Mimi and Granddaddy, as it was parent’s night out.

Thursday was another rainy day and so our son-in-law and oldest grandson had some fun time at a local jumping place.

Our daughter’s family live in Seattle, distant from all four grandparents, so it is a rare treat for them to have a whole night out.  To remedy this, the two of them spent the night out at our condo and to make it even more special, I left them flowers and an anniversary card to find upon their arrival since they had recently reached an eight-year anniversary but had not been able to celebrate.

For us grandparents, it was another special grandchild dinner with all three grands and our son.

Not accustomed to being solely responsible for a four-year old and a one-year old that don’t always sleep through the night, my wife and I were a little apprehensive about how our night might be.  Well we were most surprised to come home after dinner and find our electricity off in our neighborhood.  So, our evening agenda got revised with bath time in our whirlpool (although no whirl with no electricity) and reading time by the front door with the last rays of sunlight.  Both boys then went to bed without a peep and slept all night!  Fortunately, the power came back on at 12:06 AM (I know because the lights we’d left on shown in my eyes), so we didn’t suffer an entire night of sweltering heat with no A/C.

On Friday morning, we met our daughter and son-in-law back at CMOM for another fun adventure.  This time, all the boys got a chance to join in the fun as both our grandsons love cars just like their granddaddy (even at one, the little fella pushes cars along the ground and makes good engine sounds, no doubt learned from big brother). 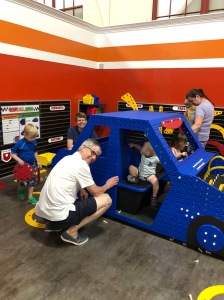 On Saturday, we were off on another adventure to the Memphis Botanic Gardens and their Big Backyard.  There were big swings to swing in…

…followed by some “fishing” in the Koi pond.

A picnic at the sand play area helped re-energize everyone for more afternoon fun at the rain shower. 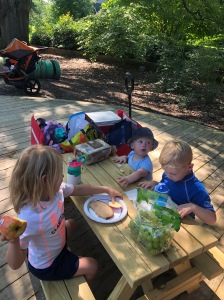 But by 2:00 PM, we loaded up our wagon to make our way back to our cars losing one of the worn out participants to a well-deserved nap along the way. 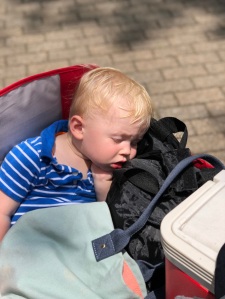 That night it was one more swim party.

Sunday, I got a chance to do something I had been wanting to do for a long time, take my oldest grandson on a fun ride in my four-door sports car.  We rolled down all the windows, opened the sunroof, and went zooming down some windy country roads nearby.  Glancing back, I could see he was having a good time as evidenced by his smile and wind-blown hair.

That night we had one more swim party (our fourth of the week) followed by an early birthday celebration for a special mom.

Monday morning was a sad time just before our daughter’s family prepared to leave for the next portion of their visit at our son-in-law’s parent’s farm.

I had volunteered to drive them part of the way there, so I got a little more time with them before I too had to say goodbye.  And the very next day, we got evidence of them having exciting adventures at the farm.

As my wife and I reflected back on our eight-day extended week with them, we both agreed it was one of the best visits we had ever had with them.  The grandkids all got along well with each other, we had a good time getting to be with all the parents, we had plenty of fun pool-time, exciting excursions with all the grands, and some nice conversations over meals.  All in all, it was a grand time together!