This weekend, I participated in my first competitive run in many years—the Cooper Young Festival 4-Miler.

As best I can tell, this is the last time that I ran in a race—the Thanksgiving Day Turkey Trot 4-miler in 2008. I finished 25th out of 54 participants in my age group so I didn’t have any preconceived notion of winning going into this race considering I was eight years older. My main goal was just to finish since I came down sick with a sinus infection just a week and a half before the race.

In 2008, running a 4-mile race was not too much of a stretch for me since at that time I was running at least 3 miles three to four times per week. But as I have written about my running before, I developed some significant back trouble in 2010 that severely curtailed my running. Since then, at best I run 2.5 miles three times a week but sometimes less.

So when I came down sick, rather than training to build up my endurance over the weeks before the race, I was trying just to recuperate enough to participate.

So what brought to me to the point of even considering a competitive run again? Well since we bought our mid-town condo, my wife and I have been more frequently taking in the annual Copper-Young festival. It is a really nice outdoor activity where we can welcome in the cooler fall weather while exploring for original art to decorate our home or condo. But the main reason we have gone to the festival more frequently is that we can now walk to it from our condo so we don’t even have to worry about trying to find a place to park our car.

As my wife and I were discussing attending this year’s festival, she mentioned she thought I ought to consider doing the Cooper-Young festival run. While I have considered running in other races since 2008, after 2010, I really had not thought of it. But given that it was a Friday night run, I decided to give it a try.

Going back to even my earliest competitive running days, after finishing an evening race, I always enjoyed, a complimentary cold beer. While I still didn’t have any qualms about downing a beer after an 8 AM run, it just never seemed right drinking a beer (or two) at 9:00 AM on a Saturday morning. It just sort of messed up my whole day’s schedule. So having a beer at the end of my day rather than the beginning was one aspect of this evening race that I was looking forward to.

With the advantage of having the condo, my plan was to go there after work, and then walk over to the race. This way I didn’t even have to find parking for my car before the race, an often time harrowing experience when running late and you find many more people than you thought were participating. And then after the race, I could walk back to the condo and get a shower avoiding the undesirable task of having to drive home in sweaty clothes. So I donned my running garb and headed over for the run. 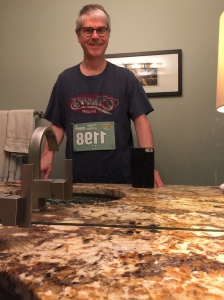 It felt good to know that I was walking over to get some really good exercise.

In previous runs without timing chips, I would typically try to get towards the front of the starting line just to get a more accurate time for my run even though I knew I was not a top competitor. But this time my goal was just to finish the whole race without having to stop and walk part of the way. With this objective in mind, it didn’t matter where I started so I had no shame in lining up in the 9:00 to 11:00 minute pace group to avoid having so many people pass me (the worst is when a runner and his dog pass me).

While thinking about the run ahead, I looked around for familiar faces. Even though it had been almost 10 years since I had run a race, I figured I might recognize a face or two. I didn’t. But this was my time to run this race and it was a large crowd of about 2,200 runners.

As we waited for the countdown clock to wind down to zero, I felt that old familiar dual sensation of excitement about the run ahead but also anxiousness for the race to begin. And then we were off! Walking due to the large crowd. It took me almost two minutes to get through the chute at the starting line where the timing chip on my running bib would register my start.

Once I was able to start running, my next task was to work into a comfortable pace and then get away from the crowd. As I did, I found that I was actually passing other runners. Maybe I was going too fast. In the two weeks prior to the race, I had been able to run a total of three times, none longer than 2.5 miles. I needed to be careful if I was going to finish this 4-mile race.

Since I didn’t have a watch, there was no way to know how close I was getting to the first mile marker and as the sunlight was disappearing quickly on the shaded streets, I couldn’t see the clock on my Fitbit either. When we finally reached the first marker, someone asked the time and was told 7:11. Wow if that was right, I had just run the first mile in about 9 minutes. Way too fast!

I tried to slow down some to conserve my legs. As we made our way towards the 2-mile marker, it was all along residential side streets of the Cooper Young neighborhood. I was amazed and touched by all the residents who were out on the street, high-fiving us and cheering us on—all complete strangers. Many residents were playing loud music or showing motivational movies like Rocky and some were offering their own water, beer, Jello shots and even fireball whisky shots. A few had their sprinklers turned on as it still felt in the 90s.

When I ran under the 2-Mile banner, I could tell that I was starting to hit a wall. My body was sensing based on my running experience this year that I should be close to finishing my run. But I was only half way through. So I had to kick in my psychological motivation. I pictured I was running holding my daughter’s hand and we were encouraging each other on, just like we did in the first race she and I ever ran together over 20 years ago (a 3-miler).

As we turned the corner to make our way back towards Cooper, I was met by the harvest moon rising. This then made me think of my son-in-law, an astronomer, and I pictured him cheering us on too.

Each time we zigzagged back and forth, I realized that there was a slight incline in the road up to and down from Cooper, just enough to make it a bit more challenging. It was on one of these uphill runs that I first started thinking about stopping and walking for a while. So I made my next goal just to reach the 3-mile marker.

It seemed to take forever to reach it but once I did, I started thinking that if I stopped now, I would just have to run another 4-mile run just to prove to myself that I could still run that far. Then the scientist in me kicked in and said, yea, but you’re already 75% through this one and if you stop now, you will have to start all over again.

After one more zag back to Cooper, the finish line was in sight and I knew I could do it. In years past, I would sprint to the finish. But not now, I simply maintained my pace. This was partly motivated by the fact that I didn’t see anyone in my age group that I would be passing anyway.

And finally I made it! Without stopping. It was with great relief that I crossed the finish line and headed for the beer table to enjoy some Memphis Made beer, brewed special for the event—Mile 5 Golden Ale—along with some fruit and pizza for dinner (this was going to be a two banana night to stave off the leg cramps). As I cooled down and replenished my body, it was with the knowledge that my daughter and son-in-law had helped me finish this race, even though neither of them knew I was even running.

When I made it back to the condo, I found that I had almost 19,000 steps on my Fitbit. Not bad given that I only had 6,500 steps when I left the condo to walk to the race.

The next day, I checked the race results and found for my gender and age group that I had finished 20th out of 39 finishers—middle of the pack just like eight years ago. But what was even more amazing was that I had run the four miles in 41:44 for a pace of 10:26 per mile. The last time I was able to time myself was several years ago when I ran 2.5 miles on a treadmill at 6 miles per hour (a 10:00 pace in an air-conditioned gym). To mark this occasion, I took a celebratory photo of me in my well-earned t-shirt…

…and started thinking, I just might have to do this again, only with better training!