Thanks to Jim Fixx (1932-1984) and his 1977 best seller, The Complete Book of Running, running became a popular sport in the 1970s. But it wasn’t Jim or his book that got me started running. No, I must give credit to my wife back in the early 1990s for getting me started.

My wife had begun to run on her own sometime before she encouraged me to give it a try. As is often the case when a suggestion is made for me to try something new, I balked. But my wife was persistent and once I recognized the health benefit of getting regular exercise—which for me at the time was doing yard work—I took it up.

Possibly one of the reasons running became so popular is that it takes very little equipment. Other than shorts, a t-shirt and some socks (items many people already have), all you had to invest in to get started is a pair of good running shoes. And even if you decided not to continue running, the shoes are still very comfortable to walk in.

With my new shoes purchased, the first time I ran, I couldn’t believe how hard it was. At the time, there was a park near our home, which had a one mile, circumjacent trail paved for walking or running. After just several hundred yards, I didn’t know if I could make it the whole way (I probably didn’t but I just can’t remember). But I stuck at it.

Beyond just the challenge of being able to run any distance, I had to find the time when I could run. Our three kids were 10, 9, and 4 at the time and both my wife and I had obligations to fulfill for them first. I found that after work wasn’t a good time as our kids had activities and we had to prepare dinner. After dinner, there were evening activities and being too full to run, it wasn’t until about 9:00 PM that I was able to find the time to run. This also meant a cool down period afterwards and a shower before bed.

I soon realized that probably the best time to run would be in the morning; I would just have to get up earlier so as not to interfere with before school activities. Getting out of bed about an hour earlier than normal proved hard at first but once my body got used to it, I began to wake up naturally at that time. Plus an added benefit of exercising in the morning was that since I always showered in the morning before work anyway, I didn’t have to take two showers a day. And since I was getting up before anyone else in the house, I didn’t have other obligations that would interfere with my exercise.

Now that I had a regular time to run, I then just had to build up my endurance so I could extend my distance. I don’t recall the first time I made it around that 1-mile track but once I did, I set my next goal to be able to run three miles. With this capability, I could then begin to participate in some of the local 5K runs (3.1 miles).

With the goal of running a 5K, I began to work up my distance. Rather than running around that track three times, I mapped out a 3.1-mile route through our neighborhood. Even if I couldn’t run the whole way starting out, I at least had a route measured with a definite finish line in sight so I could try to extend how far I ran each time.

But before I had been able to run 3.1 miles in our neighborhood, a race came along that I wanted to participate in—the annual Oak Hall Run for St. Jude. My daughter, who at the time was 9, agreed to run with me. My wife was also going to run in the race but since she was already a more advanced runner, would be well ahead of me in the run.

Neither my daughter nor I had ever run that far. We started out OK and made it through the first mile with out any problem. But during the second mile, we began to fatigue. We did manage to make it to the 2 and 2.5-mile marks but at that point neither of us thought we could make it the rest of the way without stopping and walking. Not wanting us to give up, I took hold of my daughter’s hand and said we could do this together. We held hands the rest of the way encouraging each other along. Towards the end, tears filled my daughter’s eyes and all I could do was continue to encourage us to finish. We made it to the finish line, most pleased with ourselves that we had endured the whole race without stopping to walk a single time. I still have the t-shirt from that first race as a reminder of us achieving that goal together. 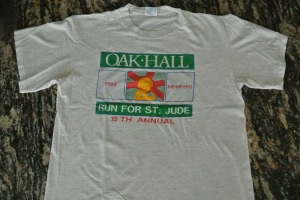 Only after the fact, did I learn that we had not run a 5K. While I don’t recall the distance being advertised in the race brochure we filled out, a coworker told me afterwards when I was bragging about our accomplishment that it was actually a 3-mile race, not a 5K. But even at 3 miles, it was still the farthest either of us had ever run.

Having run 3 miles once, my next goal was to be able to run this distance routinely. I began to run that route around our neighborhood on a regular basis. I decided to just run every other day rather than every day to give my body some recovery time. Being the age before iPods, I had time to think while I ran. And while running one morning, I started thinking that if I averaged running 10 miles a week, I would actually run 500 miles in a year—as many miles as in the Indianapolis 500 car race. This seemed like a worthwhile goal.

Being a bit of an “anal-retentive” type, I typed up a running log where I could capture the date, distance, and time it took to run. The added benefit of this was I could see if I was getting faster as I progressed.

Over time, I eventually worked my pace down to an average of an 8-minute mile. This meant for a 5K run, that my time should be 24 minutes and 48 seconds. To be easier to remember, I rounded this down to 24 minutes and 45 seconds and this became my yardstick whenever I ran to judge my progress.

About this time, I joined the runners club at the company where I worked (I eventually became president of the club). The nice benefit of being a member was that the club picked 10 local races to participate in each year and the company paid the entry fee. This allowed me to get a lot of free race t-shirts. This also allowed me to get to know other runners at the company, which I would frequently see at the races.

Running this 8-minute mile pace, I was never a contender for winning a race given that the first place finishers usually completed the 5K with a time of under 18 minutes (almost a mile ahead of me). But I did learn that some of my fellow club runners could run a sub 20 minute 5K which gave me a more realistic goal to strive for.

Did I make it? To be continued…

8 thoughts on “Running – The First Lap” Leave a comment ›