January is always a time for people to make New Year’s resolutions or establish goals for themselves to pursue throughout the year.  And at year-end, we can reflect on how well we kept those resolutions or achieved goals we might have set for ourselves.   And as anyone who has worked in the business world knows, the beginning of the year is also a time to set professional goals or objectives for the year—ones that our performance will be measured against at the end of the year.

A number of years ago, I went through some management training at work where the focus for goal setting was beyond just the short term goals we typically think of.  The purpose was to establish “life goals” with the emphasis being that without life goals, one would be “rudderless” and may achieve little over their lifetime.  They were to be goals we would work towards over many years.

And so it was, I set out five life goals for myself, each with a different time horizon, but all multi-year goals.

For anyone who has previously read my blog, this first goal won’t come as a surprise.  And in terms of life goals, this might not seem that significant of a goal.  But at that time in my life, it was an important goal that seemed just out of my reach for a number of reasons.  It was with some difficulty that I eventually met this goal but since then, I have exceeded the goal by now owning two Miatas.  In fact this goal has expanded beyond just owning a Miata to owning four different fun little sports cars (A Stable of Cars). 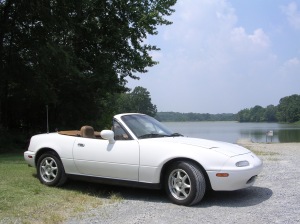 I don’t recall the year I set this goal but at the time it must have seemed a reasonable goal and one that represented some level of success in my field.  Of course with salaries increasing over 20 years just due to inflation alone, this doesn’t seem like that significant a goal anymore.

3.    Become Known in My Professional Field

At the time that I set this goal, I didn’t know how I would necessarily achieve this.  It was at about this time that I had published a couple of articles in scientific journals and probably one of the motivators for me setting this goal was the excitement I felt upon receiving requests for reprints of my article from all over the world.  I did receive an award within my company for my research that led to these two publications but it was only recognition within the company.

But it was once I began to teach my scientific course—over 15 years ago—that I really began to get recognition.  And the predecessor to this course was actually being invited to speak at an FDA conference on the topic I would ultimately teach (How I Got Started Teaching – 101).  This teaching in combination with serving on a scientific committee for many years for the trade organization that represents our industry has enabled me to become known in my field.

Often times when we set goals, we don’t necessarily have complete control over their outcome.  This is one that certainly falls within that category since it was ultimately up to my children to accomplish them.  But as a parent, I provided encouragement and support and maybe just a little, served as an example for them to model.  And I can happily say that they have each achieved success in their own ways.  And what’s even more exciting is that their potential for future success is still growing.

5.    Have a Lifelong, Close Relationship with my Wife

I knew the odds would be stacked against me in regards to this goal as nearly 50% of all marriages end in divorce.  And my goal was not to just stay married, but to have a truly close relationship, an accomplishment that is probably achieved in even fewer marriages that actually survive.  And while there have been some difficult times in our marriage, I am happy to say that together, we have achieved this goal and hopefully we will have many more years to work on it (Our 34th Anniversary).

As I was listing out the topics I would want to write about when I first decided to write a blog, this was one of the first ten ideas I wrote down and January just seemed like the right time to reflect upon this topic.  One of the things I was told many years ago as a part of this training is that as you achieved these life goals, you should set additional ones.  That part of the training I haven’t followed as closely but now that I am getting closer to retirement, maybe now would be a good time to establish new life goals, goals to strive towards in future years and ones to feel satisfied accomplishing.