When should you take the down your Christmas tree?  If you Google search this question, you will find a number of answers along with the corollary question of when should you put up your tree?  As we return to work after Christmas or New Year’s day, we begin to get a glimpse of how our neighbors answer this question as the exterior decorations disappear and barren trees begin to pile up in front of each yard before they are finally collected and hauled off—often times a depressing sight for the end of a joyous season.

Having been raised a protestant, we fell into the American consumer-focused tradition of putting up a tree well before Christmas.  And growing up, my mother was ready to take it down soon after Christmas day was over.  She thought the tree looked naked or depressing without all of the colorfully wrapped presents underneath it.  And since we typically put up a real cut tree on my brother’s birthday—December 9th—it would be dropping a lot of needles by then anyway.

But soon after I was married and I became a Catholic, one of the “adjustments” I had to make was how Advent was a time of preparation for Christmas, rather than a celebration of Christmas.  I thought it odd that Christmas hymns were for the most part, not sung in Mass until Christmas Eve and then continued to be sung into January, well after Christmas day had passed.  But once I recognized that in the Catholic tradition, Christmas was the celebration of the birth of Jesus and Epiphany—January 6th—was the celebration of the arrival of the three kings with their gifts for the baby Jesus, this made sense. 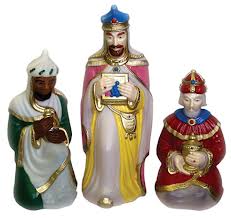 When our kids were young, we would typically put up a real tree—at least that is until we discovered several family members had allergies and then opted for artificial trees. 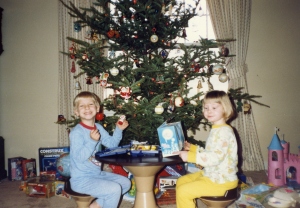 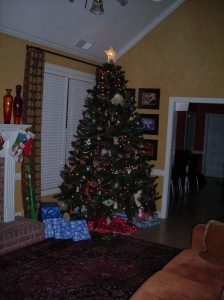 So for most of the time the Christmas tree was up in our home, either before or after Christmas, it wasn’t filled with presents except for Christmas Day.  And once we switched to an artificial tree, the tree could go up as early as we wanted and stay up as long as we wanted without the concern of the tree drying out and dropping all of its needles.

I recall reading Robert Kraus’ book, The Tree That Stayed Up Until Next Christmas to our children when they were young and this allowed me to go along with my wife’s suggestion to leave our retro aluminum tree up all year. 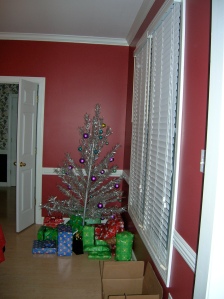 But for this year, our artificial tree is now down.

It didn’t stay up until yesterday because of the more traditional Catholic way of taking it down after Epiphany, but rather because with our travel schedule over the holidays, this was the first weekend I really had the time to do it.  And so it will stay hidden away until Christmas season 2014 begins—sometime after Thanksgiving—when it will be time to bring everything back out for the next celebration.

4 thoughts on “When To Take Down The Christmas Tree?” Leave a comment ›