Not long after this (see previous post: A Stable of Cars?), our youngest son moved to an apartment where he had an extra parking spot so he offered to “borrow” the Marshmallow for a while and keep it at his apartment.  So began the Marshmallow’s surrogate ownership with our youngest son.  There it stayed until our oldest son decided he was ready to “borrow” it back and drove it out to San Francisco after Christmas one year.

So back to a choice of two cars and fewer car shufflings each day.  Then in 2010, disaster struck (disaster at least to me the car lover).  First, my wife’s Jeep of eight years died.  The engine over heated and internally destroyed itself.  The repair to the tune of $5000 for a new engine was more than we wanted to put into an eight year-old car so we sold it for salvage.

Suddenly we only had two cars to drive.  After four years of having a choice each day, my options became more complicated.  I tried swapping back and forth with my wife but since she had numerous things she kept in the car, exchanges meant moving all of the things she would need each day.  But before I could even get used to this new world, the disaster got worse.

Less than a month after the Jeep died, we were heading downtown for a night out.  When we had stopped for a car to turn left, someone rear-ended us.  It put quite a dampener on our night out and I must say I shed a tear or two afterwards about what had happened.

Suddenly we only had one car.  Attempts to get a rental from their insurance company proved unsuccessful and even though I could get a rental car through our insurance, I knew from past experience that I would still bear most of the cost.  So my drive to work became my wife’s Vespa.

I really had to put up with the wise cracks at work about my new ride.  Since I had a reserved parking spot at work, everyone knew what I was driving.   Rather than seeing one of my three sports cars parked in my spot, everyone was surprised to see a plum purple Vespa.  At lunch one day, I was told that several of my coworkers had toyed with the idea of tying helium balloons to the Vespa to see if it would float away.  Riding the Vespa went on for a few more days until one morning on my way to work, a woman who didn’t think I was going fast enough tried to run me off the road.  It was a terrifying experience and the last time I drove it to work.  The next day, we got a rental car for my wife to drive until the Mini was out of the repair shop.

The day we went to pick it up from the repair shop, I was apprehensive about how it would drive.  Often after a car has been wrecked, it never drives the same.  Upon arrival, I could see that the exterior looked as good as new, but as I had feared, it had new squeaks and rattles.

I knew from previous experiences how difficult it was trying to isolate, identify, and resolve squeaks and rattles so I decided I would just have to live with them.  While for me, they were like fingernails scraping on a chalkboard; the sounds didn’t bother my wife.  So she happily began to drive it again; at least we were back to two cars, but only two cars.

And two cars it stayed.  Since we were preparing for two of our children’s weddings the next year, a new car was out of the question.  So I was back to driving a Miata in the cold after four winters of driving in warmth in the Mini.  Having experienced the comfort of a hardtop in cold weather made driving the Fireball in the cold all the more difficult as it again became my daily driver for all four seasons.

The next year just prior to our oldest son’s wedding, we learned that he and his wife-to-be were moving to New York City after the wedding.  Living in Brooklyn, there would be no place to park either of their cars so we shipped the Marshmallow back home.  The day it arrived home, I drove it to work where I described the Marshmallow to a friend as like the prodigal son returning home after wandering—a second time. 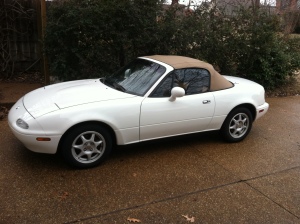 Now that we had three cars again, I tried to convince my wife that the Marshmallow could be her daily driver.  She tried for a few days but soon realized it just didn’t fit her needs.  So she returned to the Mini and I again had a choice of red or white (Fireball or Marshmallow).  But how many winters would I have in a convertible? 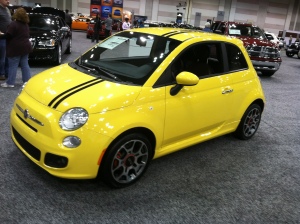 In January 2012, I went to our local car show and found what I thought could become my next car—a Fiat 500—and a hardtop no less.  Now that the expense of two weddings was behind us, buying a new car was not such a crazy idea.  My plan had been to buy a new hardtop before the fall of 2012 so I could drive in warmth over the winter.  Now that I knew what I wanted, the excitement of a new car started burning in me.  I began doing research on how I wanted it equipped.  I thought of ordering one since that had worked out well for the Mini but due to the upcoming model changeover, I would have to wait until the 2013 models were being built to custom order one.  In June, I finally found what I wanted and brought the newest addition home.

Soon after, my sister- and brother-in-law came in town with their kids.  In the heat of July weather, I had decided not to drive it to work until I could find a sunshade large enough to fit its extra tall windshield.  After several days of noticing it sitting in the garage, their youngest daughter asked if I was ever going to drive that flat car.  She thought the “I” in FIAT was a lowercase “L” and thus thought the car was named a “Flat.”  This quickly became the new nickname for the car replacing the one I had coined, “Olive Oil” which I simply named based on its green color.  Now thanks to a friend in one case and a relative in another, we had two cars with names, which were superior to any I could come up with.

Now that I have all four of my cars in the same town, I have been thinking I need to get a family photo—of the cars.  We have a lake in our neighborhood, which makes for a great backdrop.  I just need to find the right day weather-wise and procure enough drivers so I can accomplish this.

Late last summer, we purchased a condo in midtown, which would become our weekend get away place.  One of the added benefits is it has reserved covered parking.  And what it is even better; is it is just a five minute drive my office.  So now that the Marshmallow is safe sleeping over with our youngest son at his apartment, and I have an extra parking spot minutes from my work, we again have only two cars at home for our two-car garage.  My routine has become on Fridays, to drive over to the condo after work to pick up “my weekend car.”  Then on Mondays, I return it to the condo to pick up my workday car.  So who says a stable of cars has to be in just one place?  Mine are spread across three different locations all within about a 15 mile radius.  Isn’t that what franchising is all about?

As a final footnote to this story, I recently mentioned to my wife that as we were planning what our expenses would be after retirement, we needed to budget for buying more cars.  Her quick response was why; we have four cars already; that should last a long time.  But you as a reader have learned by now, cars for me are magic and we all need to take some magic with us into retirement.  So what will be the next addition to my magical collection?  A 4th generation Miata?  A Corvette?  A Porsche?  A Ferrari?  Only time will tell but for now there is the dreaming of future magic!

3 thoughts on “A Stable of Cars!” Leave a comment ›