Having grown comfortable with having toy models as an adult, I decided it was time to revisit my love of railroads.  When our oldest kids were in high school and soon off to college, we bought a larger home that had a huge playroom.  Finally I thought we had a space of the scale necessary to build a “real train layout.”  Since our two boys were old enough to participate, we all joined in the adventure.  We came up with a design together and began.  We started by building a table that we attached a 4 X 8 piece of sheetrock to for the base of the layout.  We chose to work in “N” scale, which was smaller than the “HO” scale I had attempted before since it would give us more track mileage in the same amount of space.

What fun it was to create our own design and model mountains, tunnels, a waterfall and numerous interchanges.  Unfortunately, I discovered that train modeling even in “N” scale was an expensive hobby.  Sometimes our progress was limited by how much of our monthly budget I could justify spending on supplies.  The assembly process started in 2000 and two years later, we had a working train track complete with separate transformers for running two trains simultaneously.  The next step was to landscape the entire layout.

Here also was an expensive step.  To save money, I began to purchase buildings for the layout that required full painting and assembly rather the more expensive pre-assembled buildings.  While this approach sacrificed speed of progress for lower cost, it allowed me to once again build models.  The only problem was finding the time for all of the tedious assembly required.

I recall at one point when our youngest son was in college, he came down sick and spent several days at home recuperating from his illness.  Part of his recovery he decided would be to work on the train layout and he made huge progress molding mountains out of newspaper and plaster.  Thanks to his efforts, the project took on new life and I sensed that we would actually finish it.  But time grew short again and work stopped.

At this point the train layout stood abandoned and began to move from room to room to get out of the way as more furniture filled our larger home.  Each move required the removal of the table legs and sliding the heavy frame on its edge to its new location.  Realizing that the layout would probably not be finished until I retired when I had more time to devote to its assembly, it made its final move to the garage where it stands on one end covered with a sheet.  I feel its completion may be in jeopardy as it has even lost its place inside the house.  And it wouldn’t be the first time I had taken on too big a project never to see it to completion.  But since it is standing next to our outside refrigerator, it reminds me of its presence and whispers to me each time I open the refrigerator door that it is patiently waiting on my return one day.

My business travels to Amsterdam allowed me to feed my love for models as well.  When I first started traveling to Amsterdam, I discovered the little canal houses they sell in souvenir shops and I decided I would buy one each time I travelled there.  Since some years I was going twice a year, my collection grew fairly quickly.  Soon I had to begin giving them away as gifts to avoid my collection from getting too large.  But I always looked forward to the task of picking out the next one for the collection.

These trips to Amsterdam also introduced me to museum quality miniature furniture, a wonderful discovery I made in the gift shop of a modern art museum.  Each trip to Amsterdam would include a visit to the De Bijenkorf department store where I discovered they too had a display of these Vitra designer chairs for sale.  I realized early on these were rather expensive since they were modeled in actual materials – real leather and chrome – and hand assembled with tiny screws.   Even the simplest designs were several hundred dollars but the cost didn’t discourage me from looking.  I remember one time running across an extensive display of them in the Philadelphia airport and wanting to skip my next flight just so I could stare at them longer.  One day I thought I would be willing to splurge on one of these beauties.  The one I always looked for was a model of the Barcelona chair, an internationally acclaimed chair designed by Ludwig Mies van der Rohe for the 1929 International Exposition.  This chair held particular sentiment for me as it was an addition we had made to our great room when redecorating.  I remember finding it at De Bijenkorf one year for the first time and seeing how much it cost.  Wow, could I really spend that much for a model?  Fortunately years later, I allowed myself to order it online having received a sizable portion of its cost as a birthday gift.  It is one of my greatest model treasures today and is appropriately displayed in a cabinet with other fine works of art. 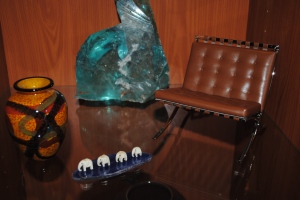 My desire to build models bubbled to the surface again recently.  I don’t know what caused it but I recognized the burning desire to build.  I floundered for a while searching for what would satisfy this urge.  I remembered what fun it had been to build the visible V-8 engine and I thought surely after all these years, they would have models of even more advanced engines; but unfortunately my internet searches proved otherwise.  I convinced myself I would be happy building the V-8 engine again and went to the local hobby shop.  Sure enough they had it on the shelf but I was disappointed to see that gone were the electric starter motor that drove the working model and missing were the firing spark plugs.  How could they have changed the model to make such an inferior toy?  Maybe it was changed for safety reasons but I knew I wouldn’t be satisfied with it now.

Frustrated, I thought about building a balsa airplane and began to search hobby shops for one of those.  My searches came up empty and even exploring the Internet didn’t turn one up.  Maybe after all these years of technological advances, simple tissue and balsa airplanes had fallen out of favor and been discontinued.  Admittedly it had been at least 40 years since I had built one.

As I write this, I find myself still searching for that elusive model to build.  Sometimes while driving, I relive some of the fun moments of building a particular model.  Maybe it is the little boy in me trying to rekindle the excitement; maybe it is the adult in me thinking these thoughts will lead to that next model.  Whichever the case, I will continue to have these thoughts with the hope that someday, the magic will come back to me and I will exclaim, “yes that it is what I should build next!”

Leave a Reply to krugthethinkerCancel Reply