My fondness for models went into hibernation during college and graduate school but towards the end of my studies, it resurfaced when I subscribed to Model Railroader magazine.  My love of models was still alive and now being fed anew as I almost drooled over the pictures of intricate train layouts.  Following the birth of our first child and over the objections of my wife, I decided to build an HO-scale model train layout in our infant son’s bedroom.  With all of the wonderful images from the magazine in my head, I was going to build my very own, just smaller scale version.

I must have been delusional to think that this would be a good idea but without much forethought I proceeded to buy a 4 X 8 foot sheet of plywood, the standard starting material for any beginning railroader.  I cut a 2-foot section off and attached it to the side to make an “L” shape for interest and began laying track on it.   Having bought an HO scale train and a few cars, I was ready to roll.  But before I knew it, our son had climbed out of his baby bed and was sitting next to the train track with the train in his hand getting ready to put it in his mouth.  The realization that this was not a good idea finally hit me so up in the attic the train layout went never to see the light of day again.

After a few more years of hibernation, my modeling days came back thanks to our daughter.  Recognizing her love for dolls, we decided to give her a wooden dollhouse kit for Christmas that she and I were going to build, paint and decorate together.  She picked the paint, wallpaper, and floor covering and we worked together to assemble it.  I probably did more of the cutting and gluing since she was too young but it was still a project we could share together.

We even picked out some miniature furniture to fill the house and make it into a miniature home complete with a nursery.

Completing this dollhouse only wet my appetite so a few years later at my urging we gave our daughter an even larger dollhouse for Christmas.  This one came with working windows, doors and even wood planks that had to be individually glued down to make the floor.  At this point, I sensed my daughter losing interest in the assembly part of the model so I put this one together mostly by myself.  While working on it, I realized that she was probably going to be too old to play with it by the time it was complete.   But surely it would be an heirloom she could pass to her own daughter one day.

After completing it, I came up with the idea of making a picture frame out of one of the miniature windows.  I bought a window, painted it, and made a cut out in a small wooden craft board to mount it in.  I painted the board to look like the side of a house and put a picture of the two of us in the window.  While my daughter lives in California now and the dollhouses are still here, she has kept this little picture reminder of our “dollhouse days” and has it proudly displayed in her living room.

I was surprised and pleased that my wife who never cared about models began to give them to me as gifts.

For several years she would give me a pedal car Christmas ornament.  This brought back fond memories of my own pedal car, which would be the first car I ever drove.  It was these miniature cars that helped me realize that even as an adult, it was OK to have toys.  Each Christmas, the little boy in me would anxiously await the coming of Christmas morning to see what the car would look like that year.  For a couple of Christmases, she also gave me miniature David Winter cottages that had incredible detail. 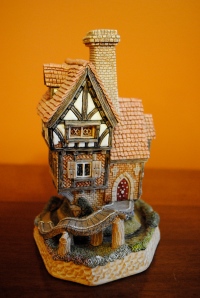 As our oldest son approached driving age, he would often ask to be given a car.   One year for Christmas, we gave him more as a joke, a pre-assembled model Corvette.  This led to other gifts of model cars and since I had discovered it was “OK” for an adult to have toys, a large collection of my own.  These 1/18-scale die cast metal cars had professional paint jobs that I could never achieve on my own.  While I missed the days of assembling the models myself, I couldn’t resist the high quality of these models and my collection began to explode.

My wife has been very understanding of my passion for models and allowing me to display them in our home but I think she must have breathed a sigh of relief when I told her I was going to take my collection of 1/18-scale cars to my office at work.  The vast collection of cars at my office, 28 in total, is one of the things I am well known for at work.  I am even willing to put up with the snide comments that while on a teleconference, I probably get down on the floor and play with my cars.  But it is my office that is always a hit whenever coworkers bring their kids to work for a visit.  I enjoy seeing the look of glee on their faces when they discover my collection for the first time.