My mother used to tell me that when I was little, I had a favorite bucket of small cars that I would play with.  For anyone who was willing to sit and listen, she told me I could take out each one and name the kind of car it was.  While such knowledge might lead a proud parent to believe their child was precocious, my thought is this early fascination simply germinated into two lifelong interests: cars (a story for another time) and models.

As far back as I can remember things in miniature scale have always fascinated me.  This passion went well beyond cars for I can recall early on being enamored with model trains and airplanes too.  But even beyond these three, I can recall having my attention quickly drawn to anything small.  If I was at a store with my parents or at a museum, it was the tiny furniture for a dollhouse or the diorama of a battle scene that fascinated me.  One of my two sisters in fact played Barbie dolls and I remember intensely scrutinizing the tiny package of paper towels for Barbie’s kitchen.  I wasn’t interested in playing with dolls; I was just interested in looking at all the tiny versions of everyday items.

When I was nine years old, I began to do more than just stare at models – I began to build them.  My very first model was a 1966 Dodge Charger.   Without any help, I figured out how to carefully cut the small, numbered pieces from the “plastic trees” without breaking them and then glue them together.  I quickly learned that if excess glue spilled on the exterior of the part, a frosty appearance resulted.  This was particularly true on clear pieces like windshields and headlights where if too much glue were applied, the part would actually melt.

Proud with a sense of accomplishment must have been my feelings upon completing it even though my finished car was completely white with just a few chrome details such as bumpers and solid black tires.  Since I had never bought a model before, I didn’t know it wasn’t molded in vivid colors as pictured on the box.  In spite of these shortcomings, what made this first model even more special was at that time someone in our church actually bought a red 1966 Dodge Charger.  And since my mother didn’t drive, the owner would give us a ride to church in it since my Dad would always leave early in the only family car to prepare for his sermon.  I remember I could sit in the back seat with my model and compare the details between the model and the real car.  What joy!

This first model lead to a multitude more over many years and by early adolescence, an entire bookcase in our hall was filled from top to bottom with cars.  After we moved to Memphis in 1970, I continued as a teenager to build many more with one in some stage of assemblage almost all of the time.  Sadly none of these treasures made into an adulthood collection, likely casualties of multiple moves and the occasional burning of a couple to create a realistic car crash.

During this period, I also branched out to build a 1/4-scale model of a V-8 engine along with the chassis for the engine to fit in.  The added benefit of building these two models is I learned a lot about how engines and cars work which further fed my love of cars.  The engine included moving pistons, working push rods, opening and closing valves, and even spark plugs firing at just the right time.  The frame required the assembly of the manual transmission, clutch, drive train, and drum brakes all of which were functional and provided a level of detail I had not encountered in any of my previous car models. 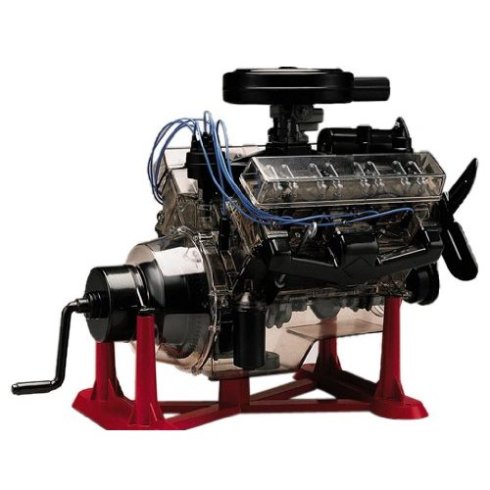 I remember proudly taking the engine to “show and tell” in grade school and pointing out its working features to the class.  However, I was stumped when the teacher asked me how many barrels the carburetor had.  I knew what the carburetor was but not the number of barrels.  I think I might have answered four having heard of that advertised on “hot rods.”  Later, I learned how to determine it on my engine and saw it only had two.

Having moved to Memphis, I sought out a local hobby shop to pursue my modeling desires.  It was here that I discovered for the first time a whole new world of building balsa and tissue airplanes.  My favorites were World War I vintage bi- and tri-planes and I can vividly picture the Spad XIII and Fokker Tri-plane that I built.  After cutting out the individual parts from large sheets of balsa wood, I would glue them together and then glue on the tissue paper.  I can remember thinking that I was probably using assembly techniques much like those used in the early 1900’s.   Only in miniature scale, it was sewing pins and rubber bands replacing the jibs and clamps. 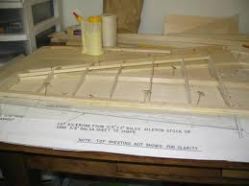 Once dried, the tissue was then sprayed with a water atomizer to shrink the tissue to create a tight skin on the airframe and wings.  The paint for these models was designed to give a hard finish and must have been fairly toxic, as I always had to paint outdoors due to the strong smell.  Interestingly, the paint was called “dope.”

I also built a U-control model airplane from the same materials and painted it a bright yellow.  It was fitted with a 0.049 Cox engine.  The only problem was at the time, I didn’t know how to fly a U-control airplane and I was hesitant to learn with my new model knowing that my first mistake would mean sudden air disaster.

For the un-initiated, in U-control you have a “U” shaped hand control with two wires running from either end of the U-control to the plane.   Depending on whether you twisted your wrist upward or downward, it would cause the plane to go up or down.  With the aid of an assistant for take off, you stood at the center of your flight path and pivoted on your feet as the plane circled around you.

To be sure that my latest creation didn’t go down in a blaze of glory smashing itself violently into the ground, I bought a flexible plastic trainer with the same type of small engine.  With this “trainer”, the one-piece wing was simply attached by rubber bands.  Good thing it was very durable because it endured numerous crashes.  After I felt confident enough, I soloed my own creation.  Spinning around in a circle, I recall dizzily smiling at my model.

My days of building models as an adolescent ended once I turned 16 and was old enough to drive cars rather than build models of them.  Thanks to working about 30 hours a week in high school, I was also able to buy my first car, a brand new 1973 AMC Gremlin.  At some point, I jacked up the rear end of it and put on big tires to make it look like some of the hot rod models I had built.  Even though I was kidded at work that it looked like a high top sneaker on wheels rolling down the street, I realized I had progressed from model cars to the real thing.  Boy was that cool.