Winter is essentially over which means it is time to bring you my annual winter puzzling story.  If you have read my previous posts, you know that I typically start sometime in December and then continue through the end of January, the National Puzzle Month.  But if you read my post last year, you know I encountered one minor problem. 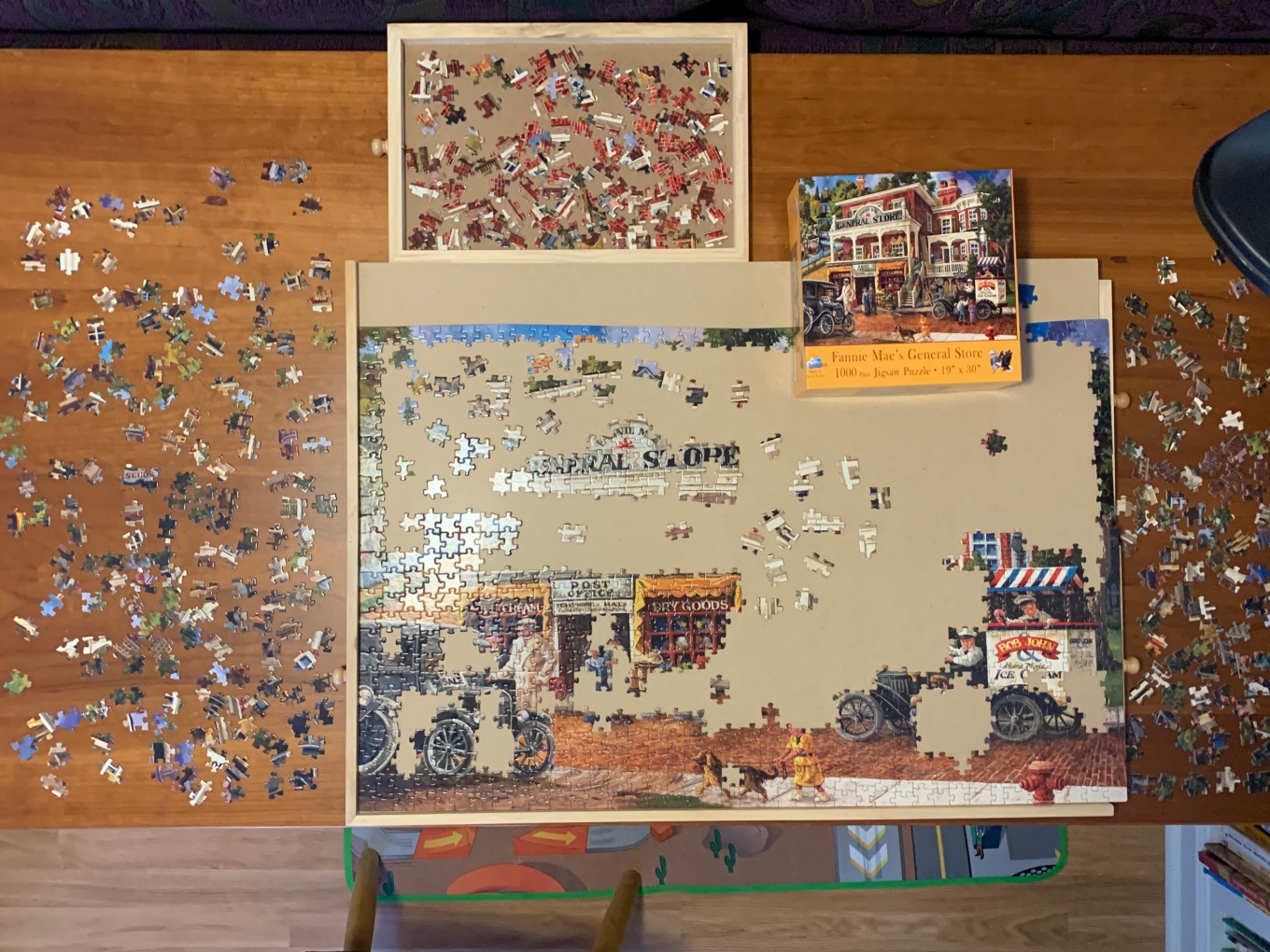 Last year, I wanted to use the new puzzle table my wife had given me for my birthday.  However, I found that it was slightly too small to work a standard 24” X 30” puzzle, being about ½ inch too short of the 30” length and about 2.5 inches short of the 24” height.  My short-term remedy was to tape strips of poster board to the table to extend it to the needed size.

However, this proved much less than satisfactory as the poster board was too flimsy to provide adequate support and so, I removed it and began to explore other more acceptable options.

After my puzzling season was over, I decided to fix this problem before I put my puzzle table away for the year.  I looked into solid wood and plywood extensions but in the end decided that the easiest material to work with would be precision-cut modeler’s bass wood.  Looking at the different thicknesses and widths the bass wood came in, I figured a 3/32” thickness would provide a nice smooth surface with enough rigidity to provide adequate support.  I then chose ½” and 1” strips with which to brace it.

The first step was to glue the ½” bracing to a 3” sheet (I decided not to try to cut it down to 2.5” as I could never achieve the same precision cut it came in). 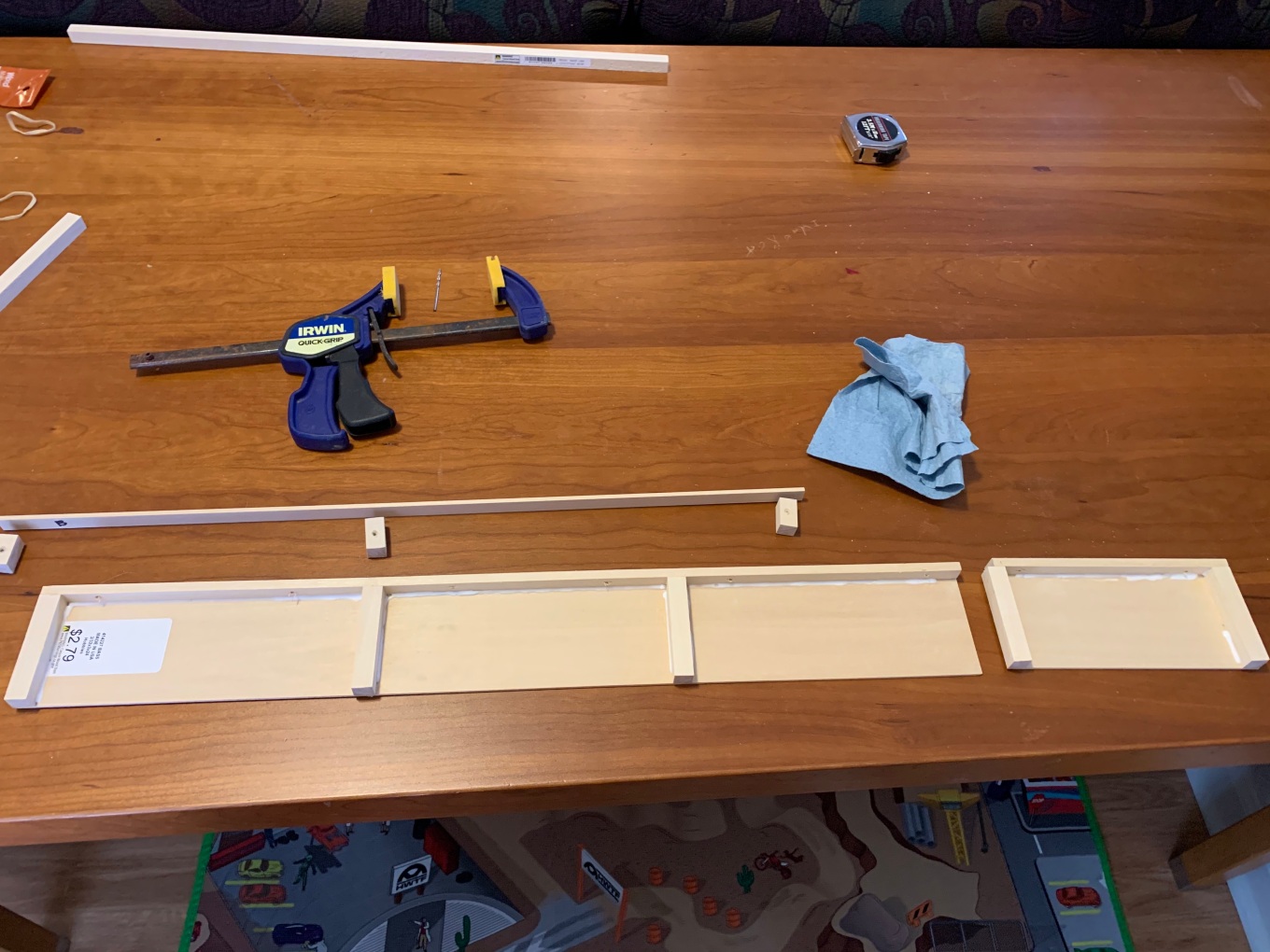 I then glued 1” strips to the bottom to brace the 3” sheet.  Since it only came in 24” lengths, I had to piece together an additional 6” to get the 30” I needed.  Once the glue had set, I drilled holes through the ½” bracing strips into the puzzle table and screwed the extension on.  For the right side, just a ½” strip was all that was needed, secured with 1” blocks. 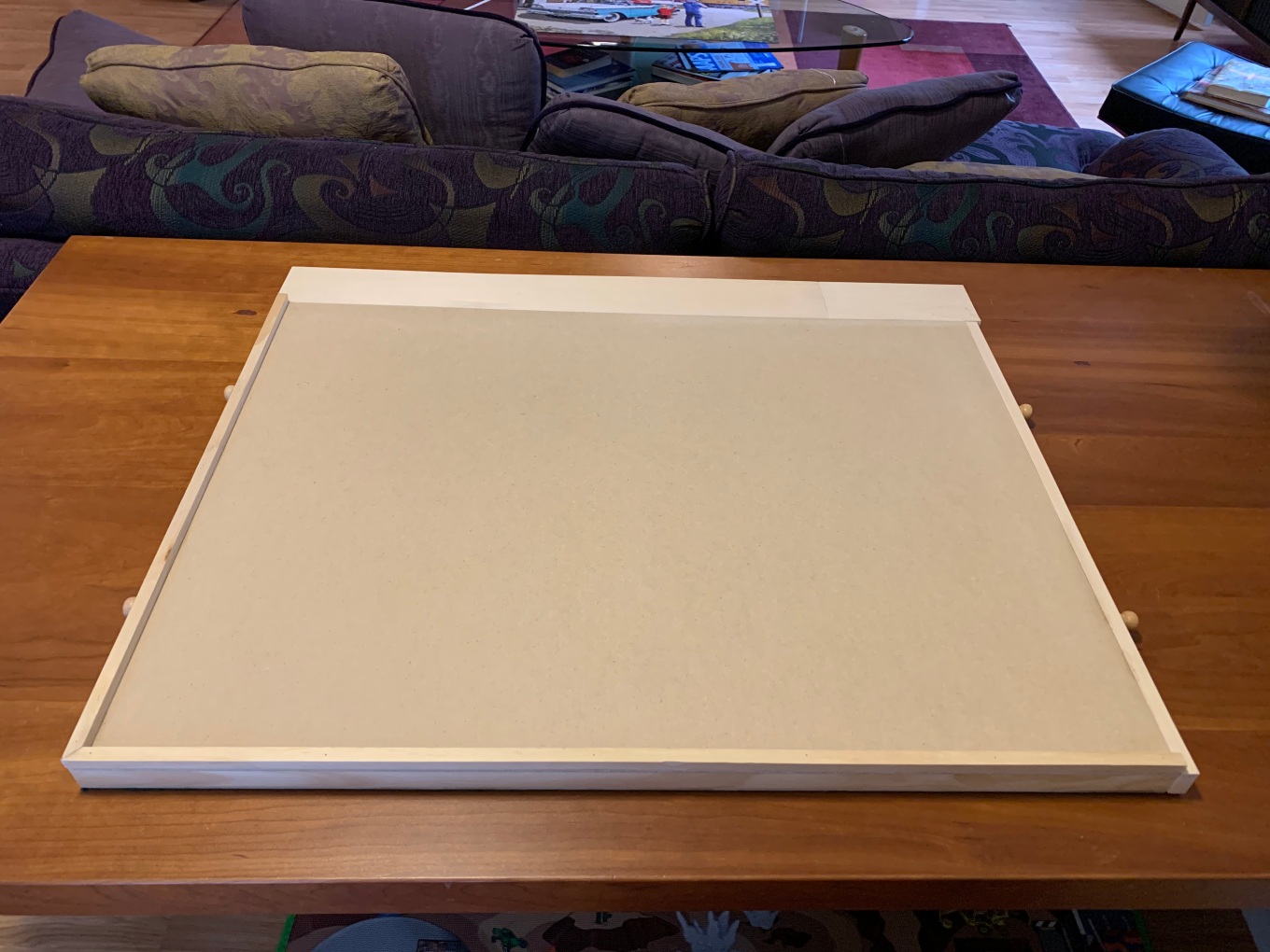 Once everything had been screwed down tightly, I turned it over and was rather pleased with the finished product.  Pushing down on the surface, I found the extensions very rigid which would make for ease of puzzle assembly.  I then put my table in hibernation to await the next season.

This year, my puzzling season started three days before Christmas.  After putting away my puzzle table at the end of January 2021, I did locate and purchase three puzzles for my next puzzle season, all with themes of interest to me.  And having recently driven on part of the old Route 66 on a trip out west, I decided to start with the one that reminded me of the long vistas my wife and I saw on our trip.

As always, I sorted out the edge pieces from the other pieces while sorting those into main categories (car, sky, foliage, road) and here is where those little drawers really came in handy as I “put away” the sky and foliage pieces for later assembly. 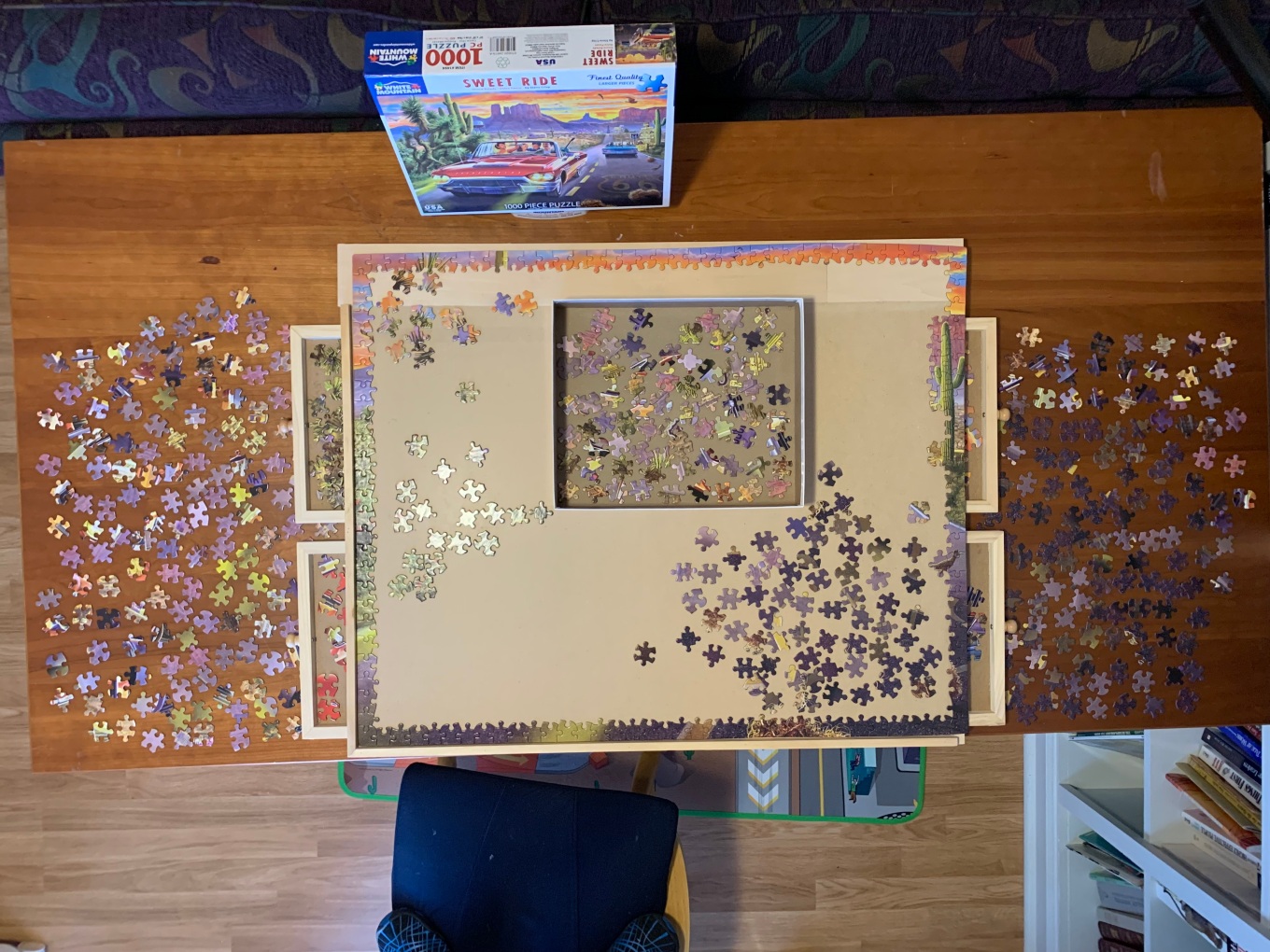 With the puzzle framed by the edge pieces, I decided to start with the most prominent feature in the puzzle, the red car and in just a few hours of working, I had that mostly complete.

I continued on with the road, adding the smaller blue car as well and my wife pitched in some one day to get that finished.

There was just one road piece left, either hiding somewhere among the other pieces or hopefully not missing when I was ready to start the foliage and sky.  Soon after starting with the foliage pieces, I thankfully found the last road piece hiding underneath some similarly colored pieces.  These pieces went smoothly along with the mountain vistas and soon all that was left was the multicolored sky… 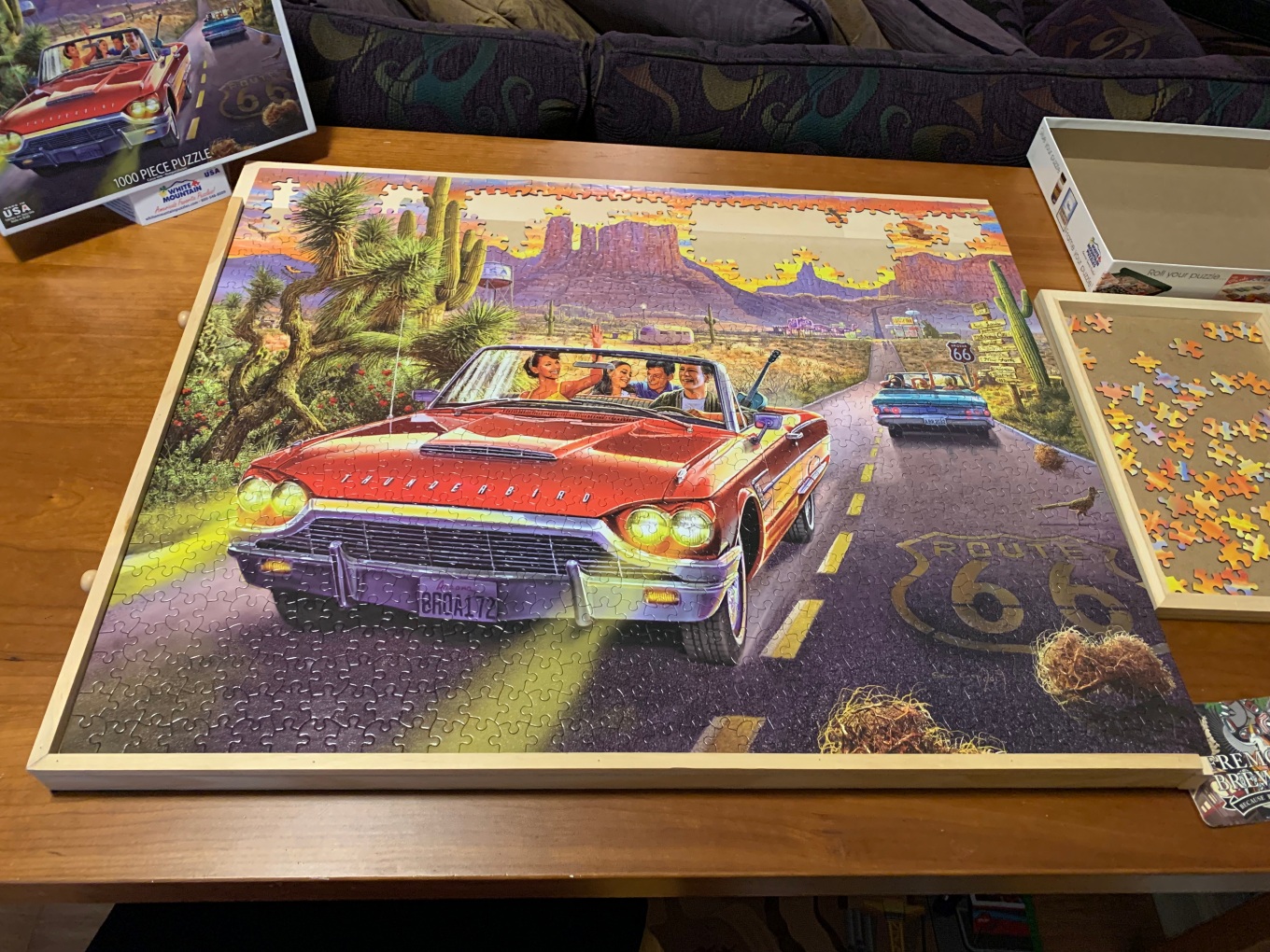 …which did not take long at all to complete.

It was most satisfying to view the finished puzzle and I moved it over to the coffee table in our playroom to enjoy seeing it while I worked on my next puzzle.

For my second puzzle, I decided to shift from cars to trains, in this case the model train layout.  Unlike the previous puzzle, this one did not have a few main color schemes into which the pieces could be sorted so I just randomly set them out on the work surface.  As I did so, I managed to find and assemble all but one of the edge pieces. 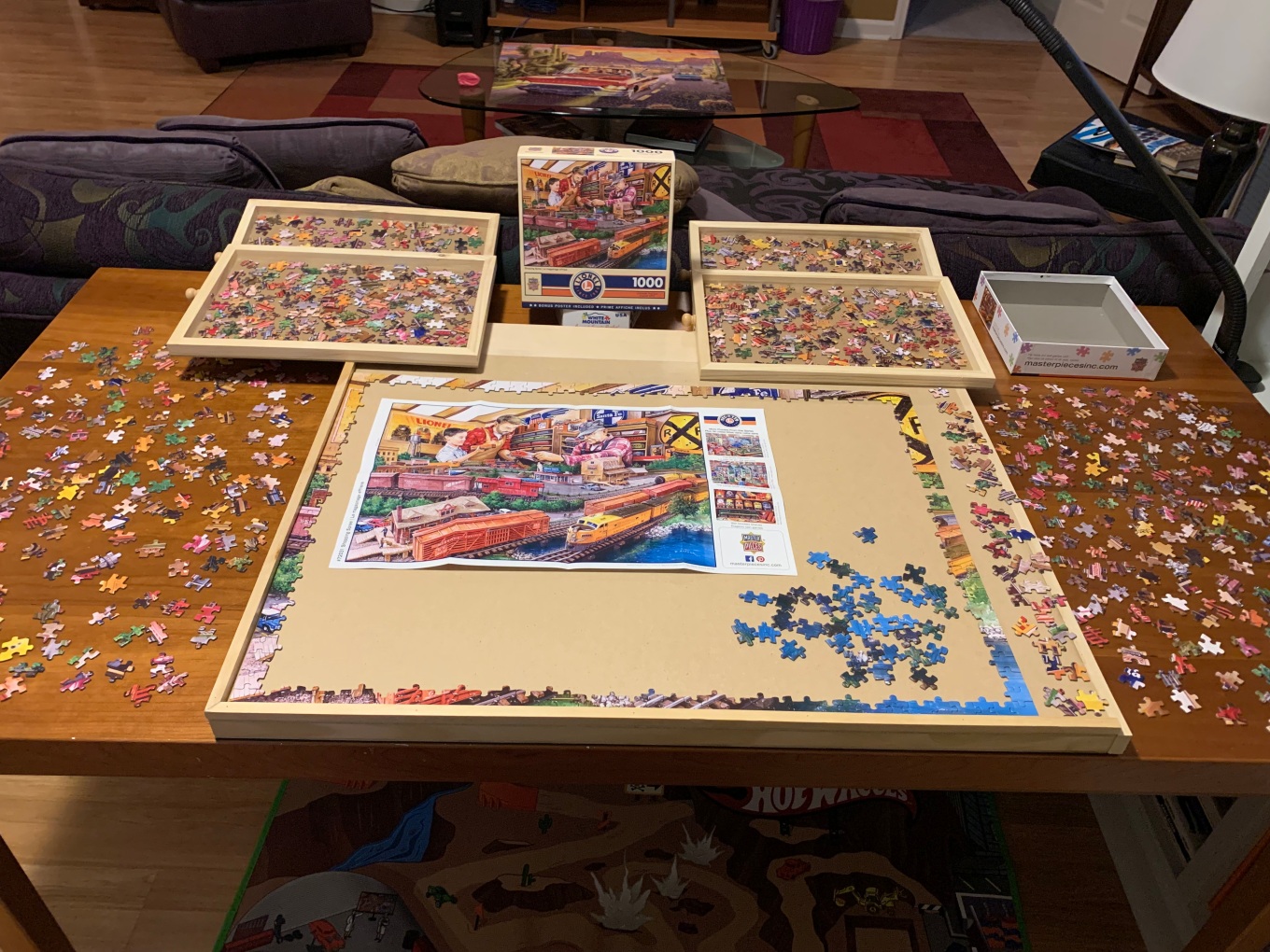 On this puzzle, my wife and on occasion, my almost seven-year-old granddaughter helped work it. Without a major feature like the red car in the previous puzzle to focus on, we worked from the edges to the center on several different sides at the same time.

Once I was about half way through with this puzzle, I made two unfortunate discoveries.  First, having used almost all of the green foliage pieces, the missing foliage edge piece on the right was nowhere to be found.

But even more disconcerting was the discovery on the far left that I had two identical pieces—a portion of a building with dark windows, that fits just above that box car.

In all my years of puzzling, I have never bought a new, unopened puzzle with a missing piece nor had I ever received one with two identical pieces.  This meant someone else was missing this piece from their puzzle.  Wonder if they got my piece or if there is a bigger issue with this manufacturer?

Despite the disappointment in this discovery, I decided to finish the puzzle since I had already invested a number of hours working on it.  It was a bit less satisfying knowing the puzzle would have a hole in it, but I still enjoyed finishing it. 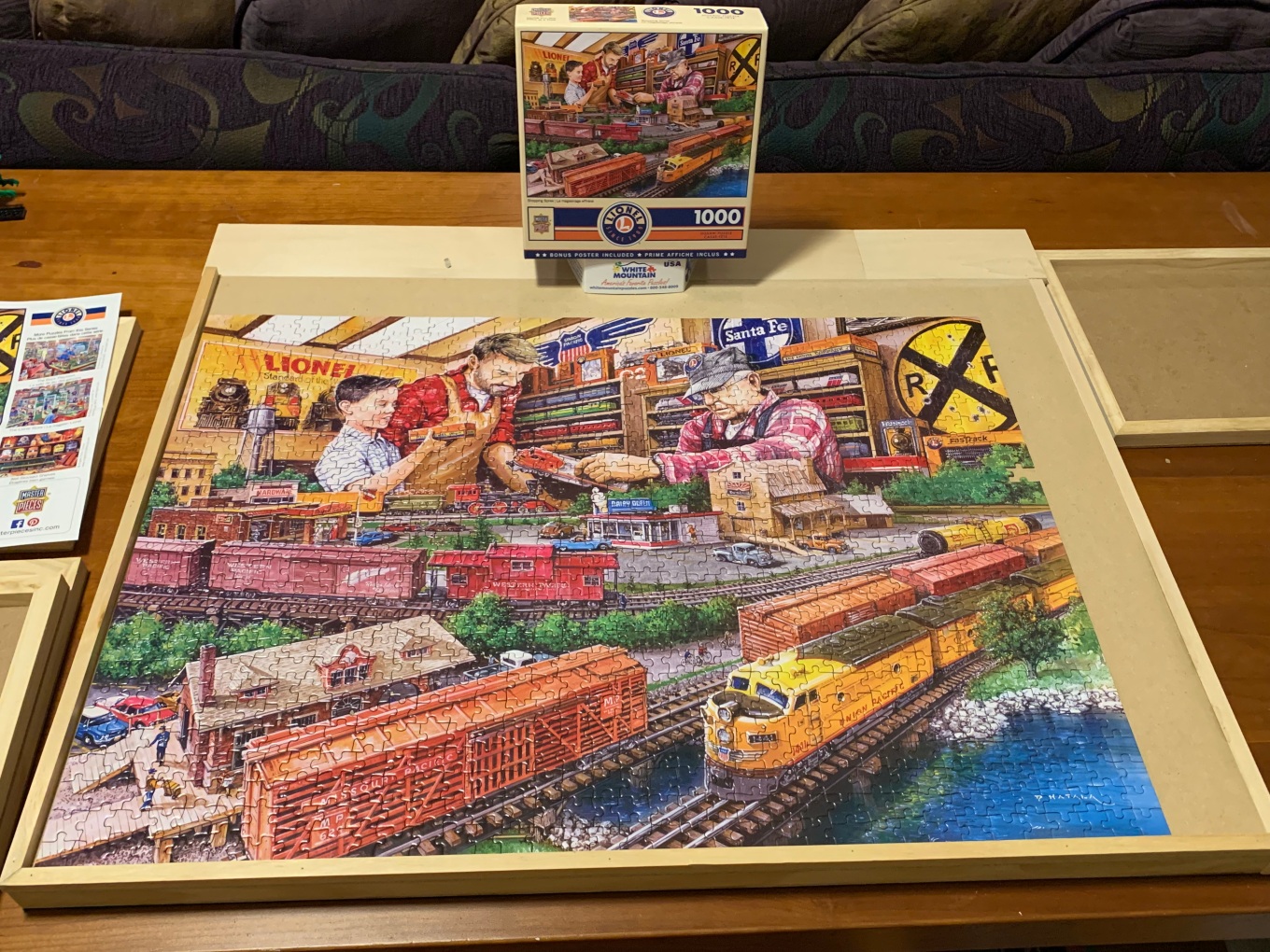 For my last puzzle, since the third one I had—also a Route 66 theme—was from the same manufacturer with the missing/extra piece, I chose to work on the puzzle my wife gave me for Christmas, one with a San Francisco theme. 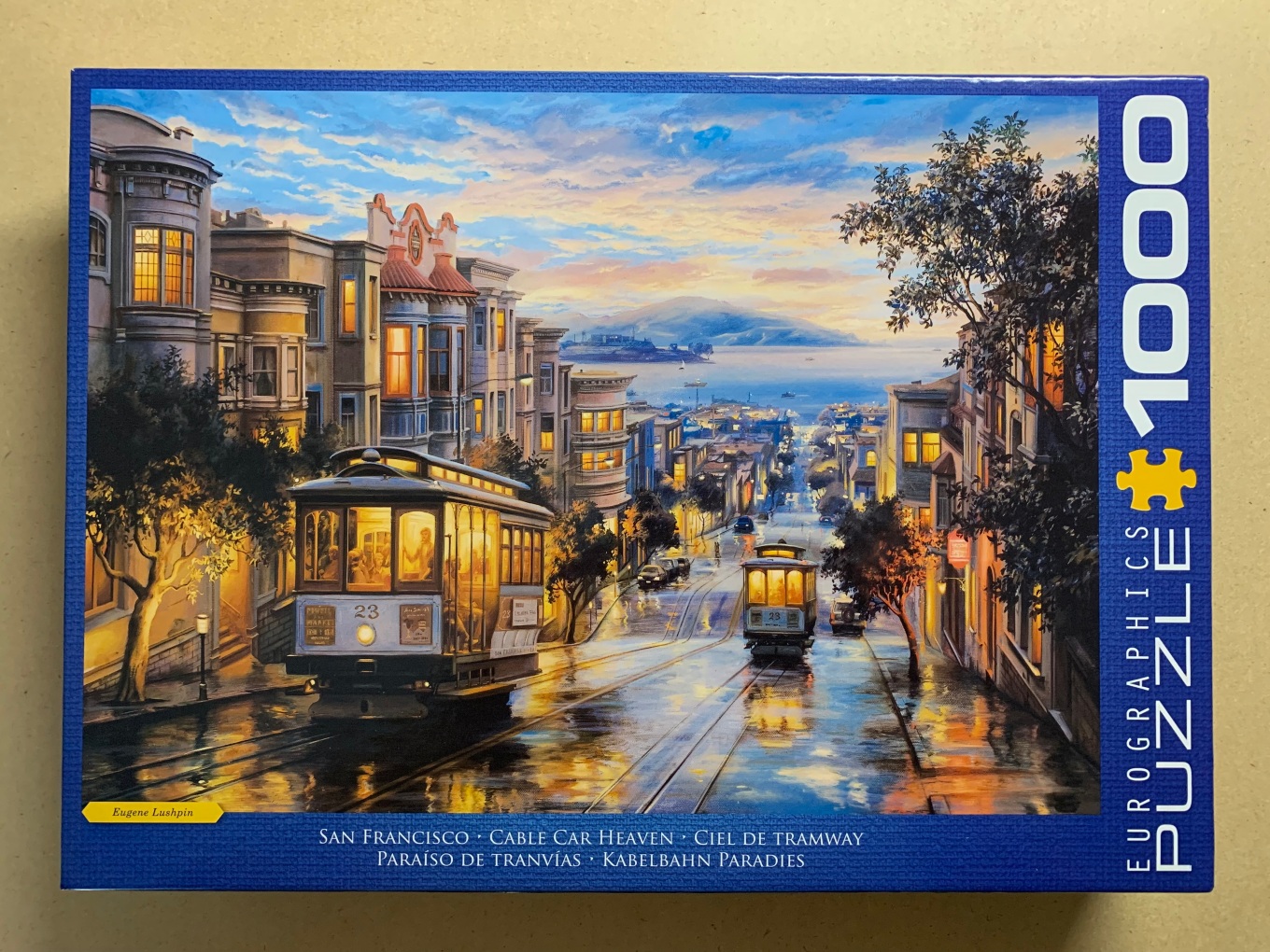 I chose to sort these pieces into four major color categories with sky being a big one, trees and buildings another, pieces with lights a third and non-descript dark pieces the fourth.  There were a lot of dark pieces making me think this was going to be a challenging puzzle.  As I built the frame, I got a sense for this difficulty and wouldn’t you know, I ended up missing another edge piece, a dark one in the bottom right.

Surely, I couldn’t be so unlucky as to work on two puzzles in a row both with a missing piece.  But since there were a lot of dark pieces where I hoped it could be hiding, I forged ahead.

Thankfully as I was working on the large cable car, I grabbed a handful of dark pieces to try to finish it and as I was moving them from the pile one at a time, I was pleased to find the last edge piece which must have been hiding under other dark pieces. 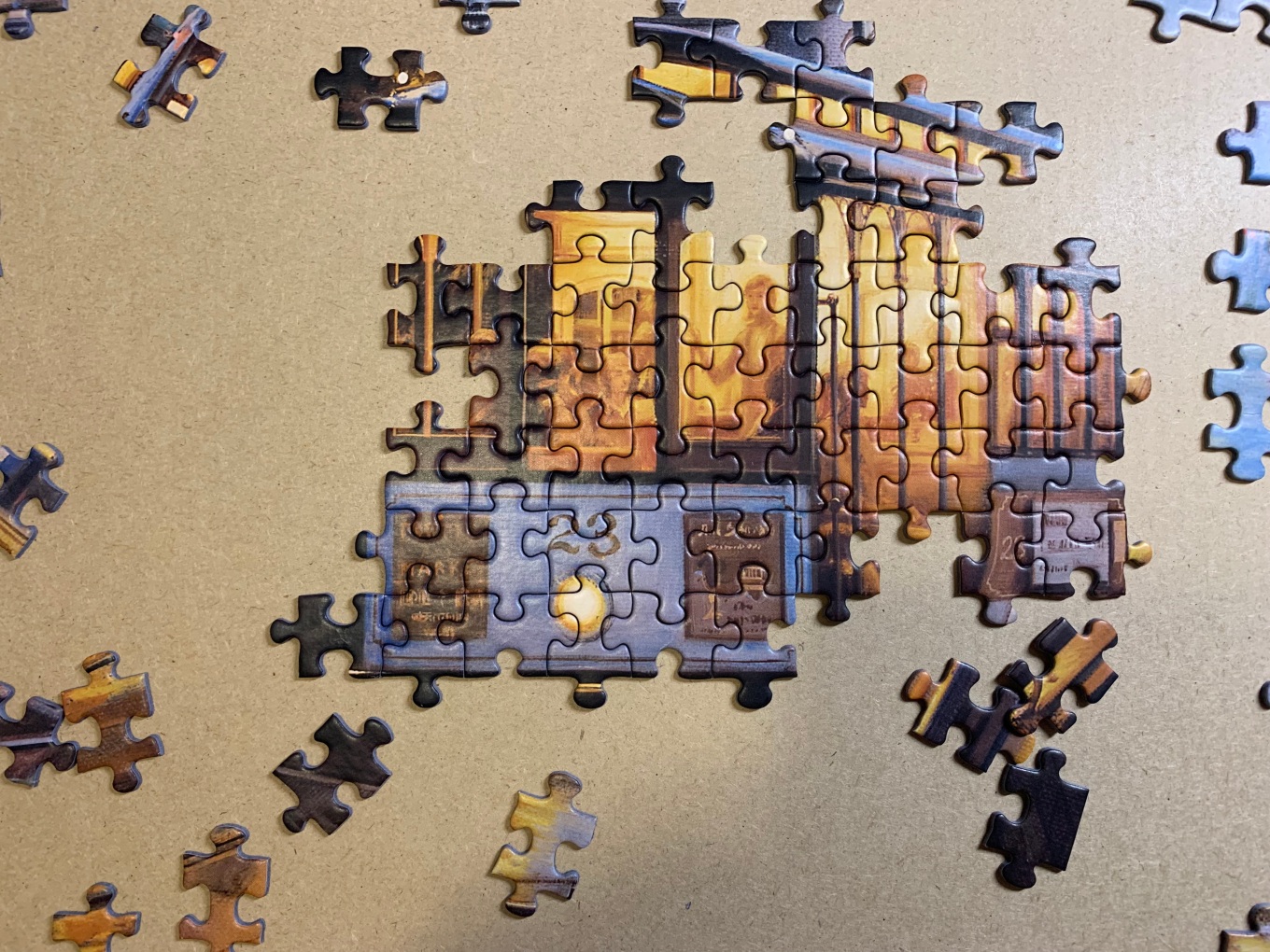 This did prove to be a most challenging puzzle.

I will spare you the gory details but at times it required a multitude of different strategies, the worst of which was removing one piece from the assembled puzzle and then searching through all the remaining pieces for its mate and then repeating.  These strategies got me to this point at which even all my strategies proved less effective. 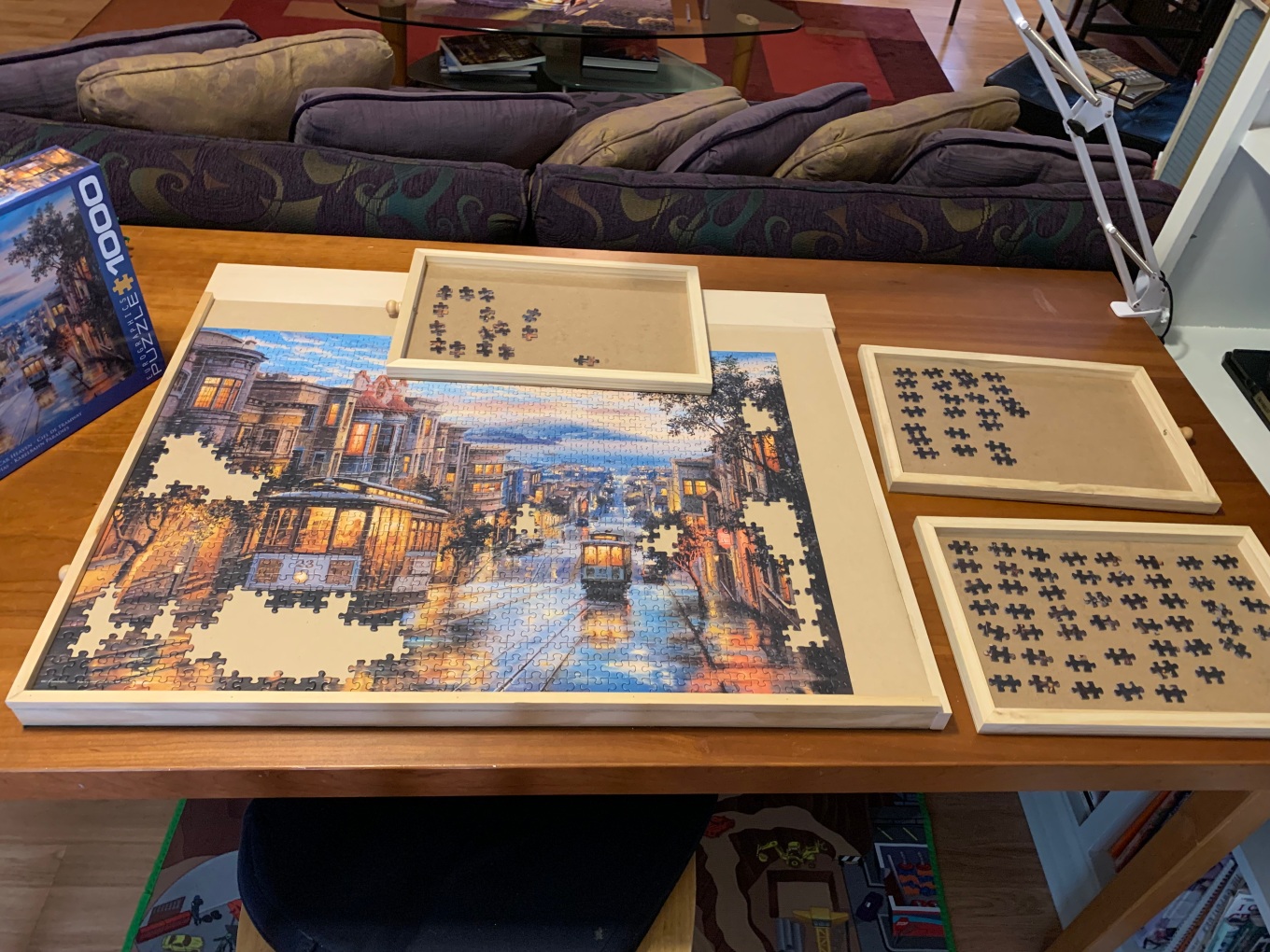 When I was down to only about 100 pieces left, mostly what I would refer to as “dark matter,” it became a one-piece-at-a-time-trial-and-error to fit the pieces in since there was little color beyond black in them that would indicate where they might go.  This obviously took a while, but I kept plugging at it and finished the puzzle three days after Ground Hog Day. 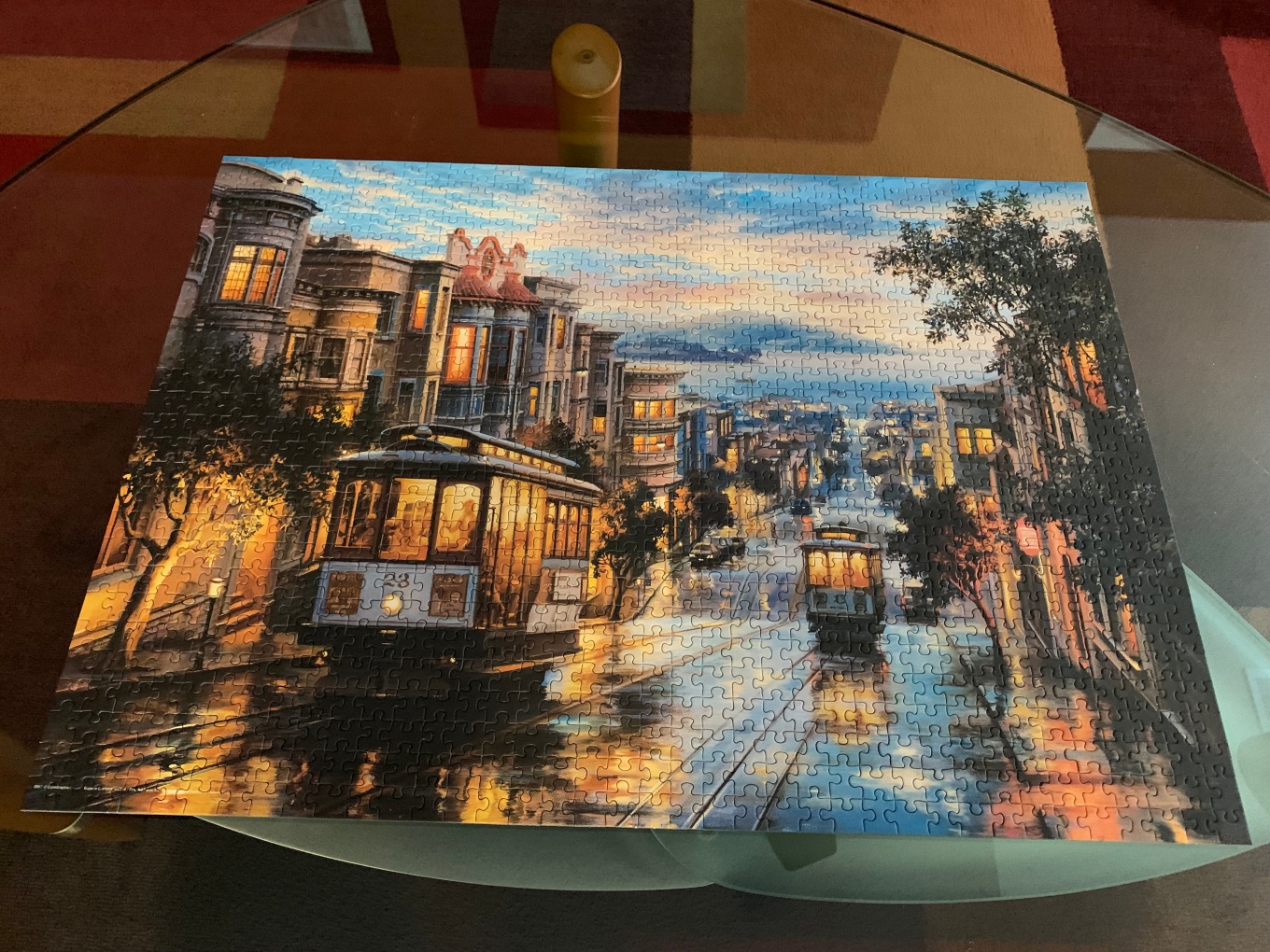 I decided to move the completed puzzle to the coffee table to admire it for a while before putting it up for the season in hopes of returning soon to this city I love.

Well, I hope you enjoyed hearing about my winter puzzle season this year and hopefully those of you out there that are also winter puzzlers enjoyed the season and had fun too!  Because when it’s cold and snowy outside, what is better than to be inside where it’s warm and feel the satisfaction of snapping piece after piece into a puzzle as you watch the image appear.