(Cowritten with my brother)

At the height of the pandemic, we all grew accustomed to just about everything being virtual.  Starting first with virtual meetings, then virtual training, virtual runs, virtual school, virtual happy hours and now even virtual Thanksgivings and Christmas meals together, there doesn’t seem to be a limit to what we will try to do virtually.  Most of us long for the day when the need for these virtual activities will be over as we have all found that the virtual experience is never as satisfying as the in-person activity. But starting last fall and extending into this spring, I got a chance to add one more activity to this seemingly endless list: a virtual DIY project.

I have written many times about the various DIY projects that I have done over the years; activities that I have thoroughly enjoyed.  From reading some of these posts, you can get a real sense that I love working with my hands aided, of course by a variety of power tools (or toys as I refer to them) and I will not shy away from almost any project.  So, when my brother and his wife decided to redo the bathroom at their 1960-era home, my brother naturally turned to me for advice.

His project would potentially involve many of the activities I had previous experience doing.  From laying down laminate flooring…

…to laying down ceramic tile… 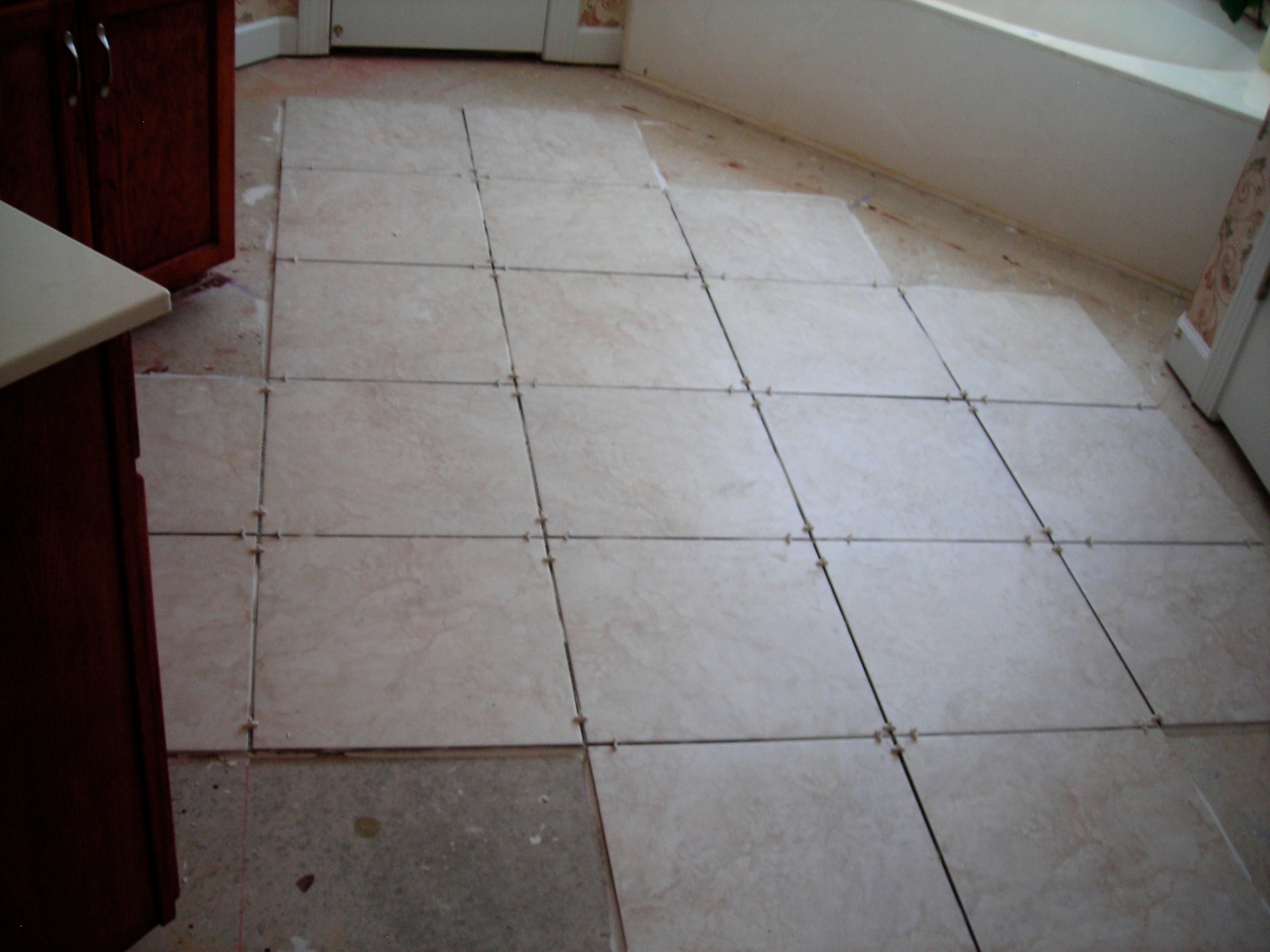 …to even installing kitchen tiling…

…I could offer advice and counseling on each of these techniques.  In fact, when my brother first started talking to me about what they were planning, I told him in any other time, I would gladly drive the 1,000 miles to his house just so that I could do this fun project.  But during this pandemic, the best I could do was talk via FaceTime or text to walk him through the steps.

Although my brother had some experience in home repair projects, including the installation of a floating cork floor in his playroom, it had been a long time since he had undertaken such a major venture.  There was the potential for as many slipups and mistakes that I myself had made when first attempting a new project of this nature.  Over the course of the project, my brother and I spent numerous hours talking and the final result turned out rather well.  While “closing the door” on this project left him with a great sense of satisfaction and pride in his accomplishment, getting there was certainly not a cakewalk as best described in my brother’s own words.

My wife and I purchased our house, which was built back in 1964, about 15 years ago from the original owners.  Before we even set foot inside, we had fallen in love with the back yard, which borders a wooded section of our local park.

There were also good schools nearby, an important consideration as our two boys were about to start first grade and pre-kindergarten.  In addition, once inside the house, some of the interior design was quite stunning, particularly the beautiful hand-crafted wooden built-in cabinets and shelving in the kitchen and den.

Even so, despite living in the house for over 40 years, the owners had made few updates and most of the interior was original, reflecting the style of the mid-1960s.  They had some “interesting” ideas about decorating, such as putting silver-colored wallpaper in the entryway, including the ceiling!  And their extensive customization made each of our subsequent attempts to repair or replace something quite an adventure.

There were a number of renovation projects and improvements we had been considering over the years.  The downstairs half-bath/powder room was one area we felt really needed a refresh.  When we moved in, it had a kind of Greek deity/architecture theme going on, especially the design of the white wood vanity.

There was also a wall-to-wall mirror, stretching sideways from sink to toilet, and rising from the vanity all the way to the ceiling.  The powder room looked rather dated.  Correction: it looked very dated!

(Unfortunately for the pictorial record, I did not take a photo of the entire powder room before we started our renovation project.  The idea of chronicling the stages of the work did not occur to me until later, mostly so I could share the progress and the mistakes with my brother.)

It may be surprising that we lived with the powder room that way for so long, but we learned to look past the garish design.  Still, we started talking about a possible renovation well over two years ago because we had noticed the drywall alongside the sink was showing stains due to water pooling at the corner of the vanity top.  Although there was a backsplash to avoid damage behind the sink, there was not a similar side splash.  We knew one day we would have to repair the damaged drywall.

Then, in early 2020, we also discovered the toilet was leaking and dripping water into the basement below.  We vividly remembered the story from the original owners when they explained why the basement – which was once finished – had been completely gutted: there had been a flood caused by a leaking toilet in the powder room!

Having no desire to fall through the floor into the basement while seated on the toilet, we called our plumber, with whom we had worked for several years on other projects.  For the current problem, he came to the house, replaced the toilet, and fixed the leaking water pipes.  He also confirmed there was indeed damage to the powder room floor.  He gave us the name of a carpenter he often worked with and recommended that we get in touch with him to repair the floor.  My wife and I decided this was the time and the opportunity to do a major update to the entire powder room.

Meanwhile, news of the spread of COVID-19 continued to be front and center in the headlines.  In hindsight, as with most things COVID-related, our timing to start this work was far from optimal.  Nevertheless, we met with the carpenter at our house on March 10, 2020.  He said it would be a fairly straight-forward project and sent a proposal later that day.  We felt we could afford the cost to get the work done (on the other hand, how could we afford NOT to?) and asked when we could get on his schedule.

We hoped we could find a mutually agreeable date and have the repairs completed by May 2020, when our boys – now all grown up – would be home from college.  We were somewhat surprised when the carpenter told us he would not even think about scheduling our work until we had the new vanity at our house, ready to be installed.  Looking back, given the difficulty we had in getting that all-important item delivered, it seems he must have had plenty of experience with all that could possibly go wrong.

Obviously, there was an even more significant event that would affect our schedule: on March 11, just one day after the carpenter had come to our house, COVID was declared a global pandemic. Our little project began to seem rather unimportant, and the renovation would ultimately be delayed by several months.  In fact, it was not until November 2020 – eight months after our first meeting with the carpenter – that he returned to begin the work.