Today, October 11th is my dad’s birthday and as is often the case since he died almost 20 years ago, I often think of him and miss him at this time.  But this particular story dates back to the spring of this year while I was reading one of my dad’s sermons entitled “The Call to Discipleship” and the story of Jesus calling his apostles.  Four of the apostles were fishermen and in particular, this sermon included the story of two of them being called to become “fishers of men.”  Reading that Bible passage made me pause to think of the connection between Dad being a minister and Dad being a fisherman.  It got me to start wondering how Dad got started fishing.

In addition to having been a Presbyterian minister for over 40 years, my dad was also an avid fisherman.  Growing up, I recall that Dad would leave for the church Tuesday through Friday and then sometimes for a short while on Saturday.  But on Monday, his only real day off, he went fishing.  I know this probably helped out our limited grocery budget since I recall eating a lot of fried fish, but I am sure that is not why he did it.  He loved to fish.  And once he retired, he got to fish even more.

In reading an unpublished chapter of his early life chronicled in what has become known as “The Black Book”—our parents life story together—there is no mention of him fishing as a young boy.  He does mention some of the sports he played, but no humorous anecdotes of him sneaking away from school or chores on the farm to visit a close-by fishing hole.  So, I don’t really know when my dad started fishing but for all my memories, I knew he was a fisherman.

As far as I can recall, my two older sisters never went fishing with our dad, but he did try to get us two boys interested in fishing.  I don’t know how many times I went but it didn’t take me long to realize this was not for me.  In addition to having to get up before sunrise to get to the lake early, it was just downright boring to me.  And when lunch time came while sitting in the boat, Dad would pass me a Vienna sausage cut in half on a cracker.  The smell of fish the food took on from my dad’s hands made it difficult to even put in my mouth.

A true fisherman must love the feel of whipping the rod to cast and then continuously reeling in the line.  And those that fly fish, it is a true art that must be developed to properly fish.  But not for me.

My brother did develop a love for fishing, or at least a willingness to fish and he became my dad’s fellow fisherman on some of those early Monday mornings.  The one story I recall, and my brother who had first-hand experience would know the story even better, is the time their fishing boat turned over in the lake dumping them both in the water.  I don’t think it was a life-threatening experience, although to my young brother it was probably pretty scary at the time, but the biggest damage was the loss of my dad’s tackle box and his prized fishing lures.  Tackle boxes are designed to float but Dad’s was unfortunately open at the time and so quickly sank to the bottom of the lake.

The one time I would agree to fish was whenever we vacationed in Montreat, NC, an annual event growing up.  We would get a day fishing pass and fish while standing on the shore beside Lake Susan (no boats).  In those early years, we would stay at a close by campground, and I can recall catching rainbow trout in the lake, taking them back to the campsite, and my mom frying them up for breakfast.  It was an immediate and delicious reward for our efforts.

After moving to Memphis, two fishing memories stand out.  One summer, we were invited down to the Gulf Coast for a few days to vacation with one of the church families.  While there, we got to go deep sea fishing for the first time.  I recall it was my first experience to turn around 360 degrees and see nothing but water in every direction.  The fish weren’t really biting much, and it took almost all day before the first one took the bait and my dad got the honor to be the one to reel him in.  My dad fought him for quite some time and as the fish got close, I remember one of the adults hollering out it was a dolphin to which I thought, oh no, not a porpoise (I didn’t know there was a dolphin fish).  But once the fish got close enough to the boat for me to see, I saw it was a beautifully colored fish.  Our friends encouraged dad to have it mounted and so he did.

This is the only fish my dad ever had mounted, and I suspected he was mighty proud of it.

My other memory was the time we went to a local lake to picnic and fish.  I was casting and as I slung the lure forward to plop it in the lake, the lead weight and hook hit me in the head.  The lead weight hitting my head was quite a painful surprise, but it was when my dad looked at me and saw the fishhook imbedded in my head that the gravity of the situation hit me.  It was a burred hook and my dad worked gently but unsuccessfully to try to remove the hook.  We ended having to go to the emergency room to have it removed with a shaved spot and stiches on my scalp as a souvenir.

So, returning to my original question, I guess I will never know when or how my dad first started fishing.  Based on the fact that a third of the apostles were originally fishermen, it just seems a natural connection to be a minister and to be a fisherman.  Since my dad had to work his way through college and seminary, it might be that he didn’t even have time to start fishing until he was employed fulltime and had an official day off.  Or it could be that after reading that familiar Bible passage so many times, my dad decided to give fishing a try.  Whatever the reason, I know fishing was my dad’s favorite past-time activity.  I am sure he found it relaxing for the quiet time and exciting for the thrill of reeling a big one in.

After my dad died, my mom having preceded him by three years, us four children had to go through all of their belongings deciding what to keep and what to get rid of before putting their condo on the market.  We each took some of our favorite possessions from our childhood memories.  The mounted fish was not among those items.  I vaguely seem to remember my mom selling it at a yard sale before they moved from Memphis to Dad’s last church before retiring.  But interestingly, I ended up with my dad’s fishing gear, his rods/reels and his replacement tackle box. 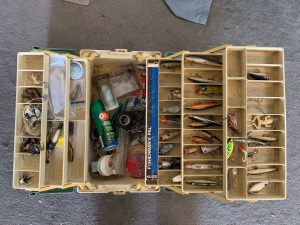 Twenty years hence, the memory fades as to why but it might have been that even though neither my brother nor I were fishermen, I had two boys who might become interested one day and would love to have their grandfather’s gear.  Well that day hasn’t come yet, so his gear is still waiting in my garage.  And his rods and reels standing in the corner serve as a constant reminder to me that Dad is off fishing full-time now.

2 thoughts on “My Dad – A Fisherman” Leave a comment ›