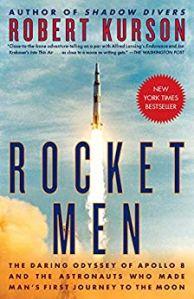 I guess you could say I am a sucker for space books having read, I don’t know how many, so when I saw this one pop up on one of my daily BookBub lists, I thought, “Should I read one more?”  Then I noticed this book was by the same author, Robert Kurson, who wrote Shadow Divers, a book I absolutely loved and even compared to a non-fiction Dirk Pitt novel.  With that realization, I knew I would enjoy it. 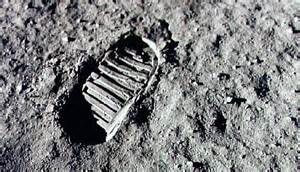 Last year in July, we celebrated the 50th anniversary of man’s first landing on the moon, for which I wrote a blog post of my reminiscences.  Most Americans can remember that famous flight of Apollo 11 and likely the near disaster of Apollo 13, but probably not many other memories of Apollo flights beyond those two.  So, it’s not surprising if you failed to mark the 50thanniversary of Apollo 8 (I know I didn’t) which actually occurred just seven months prior to the moon landing and which was surprisingly as I learned, even a more monumental accomplishment than the lunar landing.

I can say that now that I have read this book but prior to reading it, I don’t think I would have thought that.  To understand this assertion, one has to recall what was going on at the time.  It was 1968, and we were losing in the space race to our formidable competitor, Russia.  And with numerous design and manufacturing issues with the lunar landing module, our hope of fulfilling President Kennedy’s bold vision of landing a man on the moon and returning him safely by the end of the decade was slipping away. 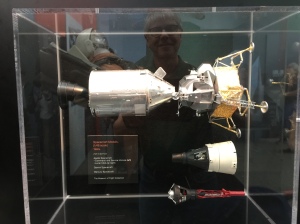 In January of 1967 the devastating fire of Apollo 1 had taken the lives of three astronauts on the launch pad.  Much re-design work went into the space capsule (more correctly the command module) but when the plan was first broached in August 1968 to send Apollo 8 to the moon, no human had even flown in the redesigned capsule, much less leave the Earth.  And no human had ever sat atop the huge Saturn V rocket that would be required to get man to the moon, the largest and most powerful machine ever built. 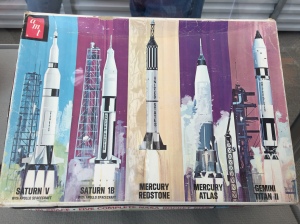 What made this such an improbable proposal was that most NASA missions required about 18 months of astronaut training prior to launch—this mission would have just four months.

This undertaking, if approved by NASA management, would be the boldest move the agency had ever taken.  For the first time ever, man would leave earth’s orbit, travel nearly a half million miles faster than any human at speeds of up to almost 25,000 miles per hour, be captured by the moon’s gravitational field, orbit the moon, accelerate out of orbit, and return to Earth, by reentry through the atmosphere at temperatures approaching those of the sun.  There were so many untried firsts, it would be fraught with risks but if successful, it would catapult the US back ahead of the Russians in the race to the moon and would put our whole Apollo timeline for landing on the moon decidedly in the year 1969.  But the only window of opportunity leaving Florida required that the men actually be orbiting the moon over Christmas.

Tremendous pressure was put forth from many fronts not to attempt this potentially suicidal mission, not the least of which was the very real possibly that the astronauts would die during this undertaking on Christmas Day, ruining forever, the world’s idyllic view of Christmas.

But ultimately, the invaluable knowledge and experience that would be gained towards achieving the presidential goal of landing on the moon, won over the dissenters.  The mission was approved and went forward.

Getting the details from this book of what went into the success of this mission and all of the potential disasters that were avoided, gave me a whole new appreciation for this mission.  As I read the words, I tried to recall if I had any visual memories of this flight when I was a preteen in 1968.  The most momentous of the six live televised broadcasts was no doubt the one that occurred on Christmas Eve at about 8:30 PM CST.  While I can distinctly visualize myself in front of the television on the night of Armstrong’s first steps on the moon, I could not recover a visual memory of that Christmas Eve, probably being too distracted with other Christmas activities.

I realize of course that I am a “space nerd” having grown up in this era and closely following all of the space program activities but I must say this is one of the best space books I have read and one that I learned the most about what I thought I already knew.  It is my second book of Kurson’s that I have read, and I thoroughly enjoyed them both.  Not only did he tell the story of the mission, he told the story of the lives of the astronauts as well as their families (including what they are currently doing, as of the publication date).  There were some surprising events and during each of the most dangerous maneuvers, Kurson spun a most suspenseful telling.

Finishing the book left me with such a good feeling and tremendous new appreciation of what was accomplished during this daring mission.  Even though I knew of the Apollo 8 mission, discovering the details and re-living the suspense of it as it unfolded made for a great story.  Not to minimize the eventful Apollo 11 mission, but had it not been for what Apollo 8 proved possible during that Christmas period of 1968, it might not have happened, at least not when it ultimately did, fulfilling the dream of a deceased president.

I cannot recommend this book enough!