One of the items I included on my long-term list of things to do once I retired in 2017 was to pressure wash and seal our driveway.

Now, after two years, thanks in no small part to Mother Nature and the mild weather we had one week in July, I can finally mark that item off the list.

Since we have an exposed aggregate driveway, it is a good practice to seal it every so often to prevent water from getting down in cracks, freezing during cold winter weather, and busting up the pavement.  I’m sure you all have seen driveways that look like that.  In our case, a thorough pressure washing is required prior to sealing as the large trees overhanging our driveway drop a lot of sap which turns black with age.

With this added step, the process requires up to three days and a total of five consecutive days without rain.  The first day would be to pressure wash, the second day would be to allow 24 hours for the pavement to fully dry, and the third day for sealing cracks and then rolling the sealant over the entire surface.  Once applied, the sealant then requires 48 to 72 hours to fully dry before cars can be driven on it again.

When I was working fulltime, it was quite a challenge to find a weekend when the weather would cooperate and provide five consecutive rain-free days.  In Memphis, the best chances were typically in August which also happened to be the hottest month of the year.  Because of this difficulty, I only tried to accomplish this once every two years.  So, when our forecast for the third week of July predicted unseasonably mild temperatures and no rain for at least seven days, I knew my time had come.

In the past, I would also save a can with the date and quantity required to seal the driveway, but when I found this rusted can in the garage, I was surprised to see that I had not sealed the driveway since September of 2013.

According to the note on the can, the last time it had required a little over six gallons to roll all the surfaces.  I went to my favorite store and found the five-gallon container, a couple of one-gallon containers, and the crack sealant.  But I had trouble finding an 18-inch roller with the same thickness of nap. I got the thickest one they had and hoped it would work acceptably. 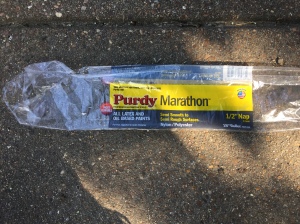 I started pressure washing on the pathway leading to our front door and was amazed at how black the walkway had gotten. 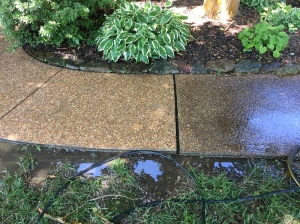 But when I had cleaned the right side of the driveway, I was even more surprised by the comparison between the cleaned and uncleaned.  This motivated me further to do a thorough cleaning job which I finished mid-afternoon. 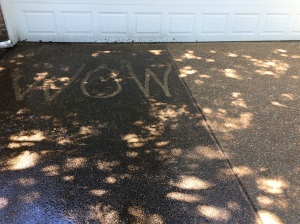 The next morning, I started filling in the cracks using a bottle of sealant which contains mixed in sand. 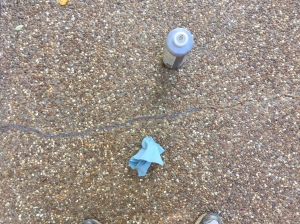 Some cracks traversed the entire width of the pad…

…while the divide between the left and right sides of the driveway was one continuous crack.

By lunchtime, I had filled in all the cracks and was ready to roll.

The label says that the sealant requires at least four hours to dry before foot traffic can walk on it so there is some strategy involved.  I always start at the front door and work my way over to the driveway.  That way I know no matter how long it takes to finish; we can at least enter the house through the front door within four hours.

As I rolled my way over to the driveway, I was pleased to see how nice the sealed concrete looked.

And once I had finished the first driveway pad, it was even more rewarding.

The less thick nap roller seemed to work just fine.  I used a technique similar to rolling a wall with paint where I would roll in one direction and then roll back over the same area at a 90-degree angle.  This gave me complete coverage.

By 5:00 that day, I was all finished.  Stepping back, I was pleased to see the finished project… 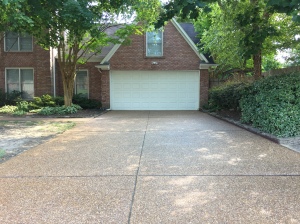 …particularly when compared to the unsealed.

An added bonus of using the different roller was that the entire job took exactly 5 gallons. Considering that the sealant runs over $20 a gallon, this represented a significant cost savings.

Now that the job is finished, I get pleasure every time I walk or drive on it.  This particular sealant retains that wet look giving the appearance that the concreate has just been washed.  Hopefully, it will stay that way for a long time; only time will tell when it is needed again.  But now that I am retired, I should be able to repeat the job without having to wait another six years!