Motivated by my second-place finish in my last race, the Wolf River Epping Way 5K, I once again ran in a local race to benefit the Wolf River Conservancy (WRC), where my youngest son works.  To be honest with full disclosure, that was the inaugural run of the Epping Way 5K and as a result the field was on the smaller size (estimated at 130) so I was not running against many of the fastest runners in my age group.  But considering it was the first time I had finished in the top three spots in at least two decades of running, it was still exciting.

This latest run I ran was the Beer and Bagel Off Road Race.  It was a first in two regards as this organization having held runs for over the last 20 years, was for the first time holding their event in Tennessee.  And it so happened to be the first time that WRC was the non-profit beneficiary of the race. 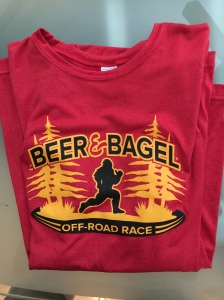 I only had two concerns about participating in this race.  The first was that it was advertised as a 4-ish mile run, about a mile and a half longer that I typically run.  But even more disconcerting was that it was to be mainly an off-road race.  It has been many years since I ran a race off-roads and I recall being so sore afterwards from muscles I didn’t even know I had—ones obviously I don’t normally use running on paved trails or roads.  But knowing that my son was once again the WRC organizer, I took on both challenges with only a slight amount of trepidation.

Mother Nature was apparently watching out for me. 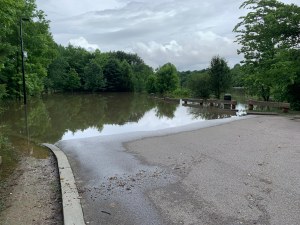 36 hours before the run was scheduled, Memphis received 11 inches of rain over night leading to flooding of the Wolf River.  The photo above, taken the morning after the rainstorm, is of the parking lot next to the WRC Greenway where the registration and post-race party was to occur.

On Friday, when my son surveyed the previously planned race course, he found a significant part of the dirt trails that run right along the Wolf River covered with several feet of water. Working quickly, he and the Beer and Bagel staff developed a totally new course.  It just so happened that the previous 3 mile off road section became mostly routed on the paved Greenway itself.  In fact, about a one-mile section was not even open to the public yet so we were the inaugural runners on a section that wasn’t scheduled to open until next year.  The new route still included a portion of the off-road section that had not flooded but was reduced to less than three fourths of a mile.  I know this last-minute scramble created untold headaches for my son but for me, it was a blessing in disguise.

Fortunately, the next day the water had receded enough in the parking lot to at least allow for the planned registration and post-race party.  As I made my way to the registration table, I ran into one of my college fraternity brothers from many years ago.  Turns out he is a marathon runner.  As we talked briefly before the race, it became obvious he would be beating me (he is also in my age group).

With the starting gun fired, we began a downhill run on pavement and I somehow got ahead of my college friend.  But before we made the first real turn, he passed me, and I told him I’d see him at the finish line.

In less than a half mile, we were routed onto the dirt path that ran through the woods.  It was literally a one-lane trek and passing or being passed became treacherous.  Thankfully most passers announced their intent from behind, so I was not unaware I was being passed.  And I actually passed one person on that section.  Portions of it were a bit muddy and I had to cautiously place my steps to avoid slipping.  When we rounded one more bend, I was glad to see that we were getting back onto pavement.

For the next three miles or so, it was a quite pleasant route, running mostly along the swelling Wolf River under a shady canopy of native trees.  I had never run here before but would most definitely want to again in the future.  Because of the last-minute route change, the mile markers did not get redeployed on the new route so for the entire run, I had no idea how far I had run nor what my time or pace was.

On the newly paved section, the route was designed to run up to where it temporarily ended and then circle back along the same section (an out and back).  After I made the loop back, I decided to count the number of runners (and a few walkers) still heading towards the loop to at least gage where I was in the field.  I counted about 90 before high fiving Sasquatch who was bringing up the rear.

Once I completed the unopened section, I knew I didn’t have too far left but still had to resurrect that old motivation from when I ran for the first time with my nine-year-old daughter.  I kept telling her we could do this.

I managed running the entire course without stopping once (or slipping and falling) and was pleased to see a time of 39:13 click off as I passed the finish line.  I learned later from my friend who tracked the route with his GPS, that the course was actually 3.8 miles.  While it was a bit disappointing to learn that I had not beaten a 10-minute pace, this still gave me a respectable pace of about 10:30 per mile, not bad given it was 50% longer than my usual run.  And what better way to capture the moment than with a photo of Sasquatch himself who had growled us on.

It has been many years since I competed in a morning race and enjoyed a beer (or two) post-race before 10:00 AM in the morning.  But it was most refreshing and rejuvenating.  And they had some of the best bar-b-que I have ever had in Memphis.

When they began to announce the awards, my college friend finished third overall male in the Masters (all male runners 40 and older).  He was pleased given that he was 20 years older than some of his competition.

When they started calling out my age group (males 60 and older), I was very surprised to hear the time called out first, my time of 39:13 and then my name.  I had won first place!  Well technically my friend had beaten me, but he won a more prestigious award having competed with all 40 and older male runners (plus, they don’t pass out double awards).

When the official results came out, I learned that I had finished 47th out of a total of 137 runners who completed the course (20 either didn’t show up or never finished the course). Not a bad showing!

Overall it was most rewarding to have competed in this run and have two finishes in two races; I am spurred on to participate in more runs.  But I will need to up my regular distance that I run to prepare me so that each one won’t be a stretch for me to finish.  As for parting encouragement from my friend that I should at least try to run a half marathon, I’ll have to wait and see if that it is in the cards.  In the meantime, I look forward to my next run, hopefully just a 5K.