The rain I had encountered on the Blue Ridge Parkway (BRP) continued in Asheville but it wasn’t going to stop me from visiting my favorite place on Earth—Montreat!  I can’t count how many times I have written about this wonderful mountain retreat that all my siblings and I consider home since we vacationed here every year growing up.  In spite of the rain, I still had to roll down my windows and open up the sunroof just so I could hear the mountain stream that ran right by the road, fed by the water spilling over the dam of Lake Susan.

I quickly parked the car and practically ran up the steps to catch my first glimpse of peaceful Lake Susan in two years.

The rain on the lake obscured the reflection of Assembly Inn that I was normally accustomed to seeing but didn’t dampen the exhilaration of being there. 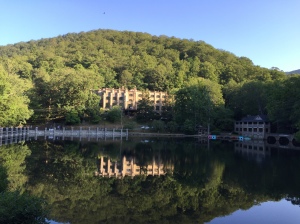 With the rain preventing me from exploring many of the familiar sites, I settled down on the porch overlooking the dam and stream for some relaxing rocking and reading time. 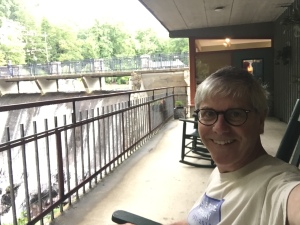 All the rain that had fallen in the area sent even more water than normal over the dam and provided a stereo of sound that was music to my ears.  Realizing that I had sat on that very porch hearing that familiar sound for over fifty years of my life brought an overwhelming sense of peace and place to me. I just can’t get enough of it and before I knew it, I had been sitting there about two hours.

There was no sadness as I drove back through the gate that night, as I knew I would be coming back the next day.

After checking into my hotel in Asheville, I met my brother-in-law at a brewpub I had not been to before.  They had good food and beer and even had a special brew to honor Elvis on the approaching anniversary of his death (although sold out as indicated by the red X in the center of the menu).

The next morning, my brother-in-law accompanied me back to Montreat.  Unfortunately, the rain continued so my plans for exploring old familiar sites were again supplanted by more sitting on the porch and reading, an activity I gladly enjoyed for another two and a half hours.

Following lunch at a brewpub in the nearby town of Black Mountain, we drove back to Winston-Salem for our last night together at his home.

The following morning, Friday, my wife and I loaded up our car one last time for what would be the longest leg of our entire trip back to Memphis, 630 miles.  This would be the real test of whether or not I could drive this car on any of those extended trips in the future as this would be the farthest I had driven in the WRX in a single day.

I decided to use Google Maps on my phone rather than the GPS on my car and I am glad I did.  As soon as I plugged in our home address, it showed me three alternate paths home but most importantly that the route I had intended to follow, the one through Virginia was going to take over an hour longer due to traffic conditions.  I selected the preferred route with the shortest travel time and off we went.

While this route took us back through Asheville, where I had just been the day before, it also provided the most scenic way home as I-40 traverses right through the Smoky Mountains. And with all the precipitation there had been during the week, the mountains displayed their true character with beautiful white clouds hanging low among the peaks.

Since my wife had skipped breakfast, we made an early stop for lunch and then only one more stop to get gas, just west of Knoxville.

From Knoxville to Memphis, we drove over 360 miles without stopping (other than for traffic).  When we were about 30 miles from Jackson, TN (over a 100 miles still to go), Google Map alerted me to a wreck at mile marker 35. Initially the delay was only about 20 minutes but as we continued, the delay was updated with longer and longer waits. Once the delay, reached over 1.5 hours, it began to provide alternate routes that distance-wise would be longer but saved almost an hour’s driving time over staying on I-40.

We took it and I am so glad we did.  We got a chance to see some eastern parts of our county and the one over that we had never been through before rather than crawling along the interstate we had seen a million times.

Since we’d had an early lunch, rather than going home first, we drove straight to my favorite burger place for dinner and another well-deserved beer. 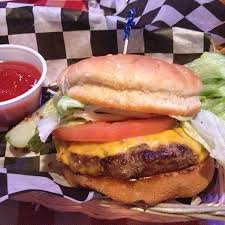 When we pulled into our driveway, I checked my trip odometer and saw that we had driven a total of almost 1,850 miles.  As I reflected back over the trip, there were only a few occasions when the sport suspension and low profile tires on my car transmitted the rough road into the seat of our pants. I asked my wife how it was for her and she said it was for the most part comfortable although loud on some of the rougher roads.  She was also able to lay down in the backseat and actually fall asleep on part of the trip home, something she could never do in my previous small cars (Mini Cooper and Fiat 500).

While 630 miles is a bit longer than I like to tackle in a day of driving, the fact that we did it indicated to me that longer trips, broken up over several days, could easily be done.

I’ve never owned a car that was both sporty and comfortable to take on extended trips, the two just seemed mutually exclusive.  But now, I felt like I had one.  Which opens up the possibility of other road trips I have on my wish list.  Historic road, West coast, here we come! 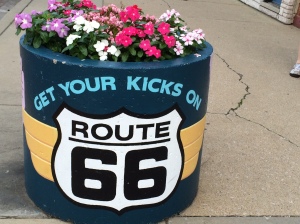