One of the advantages of being retired that I have been looking forward to this spring is not only being able to get an earlier start in working in the yard but having the extra time during the week to work there.  In the past, some visitors have described our backyard as a garden paradise.  But over the years as the foliage has grown and our flowerbeds expanded, it has become more and more difficult to maintain.  I described this backyard growth akin to the formative and adolescent years of a child in a couple of posts in 2014.

While I was still working full-time, I typically only had one day a weekend to work in the yard.  With this limitation, I typically overdid it working almost from sunup to sundown to try to get as much done as I could.  Then it would take me a few days for my very sore muscles to recuperate whereupon I would do it again the following weekend. Even with this aggressive schedule, it typically took me until June or even July to get all of the flowerbed weeding done even with my wife’s help (although her activities were sometimes limited by her allergies).  Some years I never did get finished before the heat of summer drastically restricted my gardening activities.  This year, I paid the price for some of those unfinished activities.

Last year when I was doing some of my weeding, I additionally decided to lay down some landscape fabric prior to mulching to hopefully prevent weeds from coming back.  This year, I was amazed at how well it did only having to weed a few spots where I had not laid down the fabric and simply adding some new mulch to make the bed look fresh and nice.  I decided to use that fabric as much as possible on the beds that I would be weeding this spring. 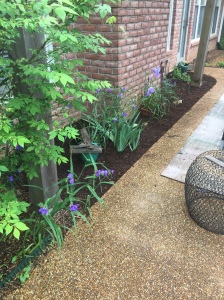 This year, I started in the bed beside the house.  Even though this area did not have the landscape fabric, it did not have a lot of weeds and thus was fairly easy to weed.  Probably since we previously had these beds professionally dug out and the soil replaced had a lot to do with the minimal number of weeds there.

I next moved to the other side of the patio and weeded this bed, which also was not too onerous of a task.

When I moved to this portion of the bed next to our deck, I had the problem of not only weeds but also the steps needing repair or replacement.

Since I knew I had other deck work to do to replace other rotted boards, I decided not to interrupt my weeding progress by starting another project that would probably take longer than I thought (as usual) and thus allow the existing weeds to get a greater chance to take over the beds. 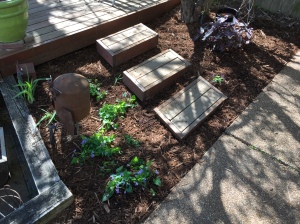 So without replacing any of the step boards, I was able to repair them enough so that they could at least be walked on while also getting the weeding and mulching done. 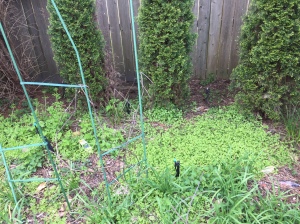 The next stop on my magical weeding tour was the bed next to the pool.  It was particularly overgrown and so required much more effort.  Plus I had to work around plants that actually were not weeds that we wanted to keep.  But once I finished it, it looked much nicer. 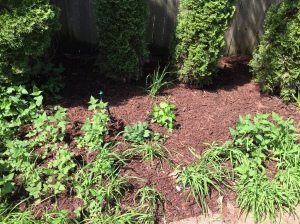 But by far the absolute worst bed was the one that I couldn’t even recall the last time I weeded it. 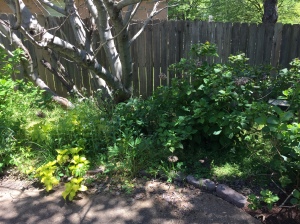 This one took me three separate days to finish… 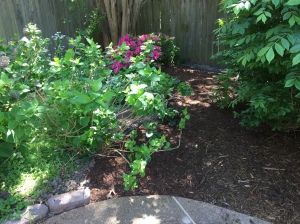 …and this is where I liberally laid down the landscape fabric. 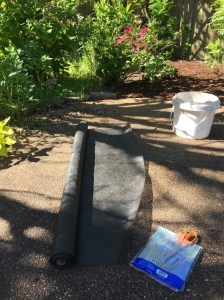 It may not be easily discernible from the photos but some of the weeds in this area were like a ground cover with multiple roots spread out.  I would dig up some and then roll it up like old carpet, dig some more roots and roll some more.  In certain sections, I ended up with a rolled pile of weeds as big as a large beach ball.

Fortunately while working this section, we were blessed with several good soaking rains, which made the weed pulling, by the roots much easier.

However, it also left me quite muddy, in fact too dirty to even go in the house for lunch.  So on many of these days, I wasn’t able to eat lunch until 2:00 or 2:30, after I had had a very thorough scrubbing shower.

This side of the yard where I had just finished weeding also slopes down and so to prevent all the landscape from washing away, I needed to recreate my drainage path.  Previously I had made a gravel path along the fence but so much soil continued to wash down that the gravel was soon lost.  This time, I decided to lay down the landscape fabric and add steel edging to keep the gravel in. 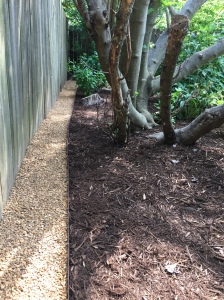 The last steps for weeding were these two beds.

But these two led to more than just a weeding activity.  They required significant new landscaping activity.