Recently, when I started my list of activities to do once I retire, golf was on that list. Interestingly, golf really hasn’t been on my mind in quite some time. But a recent conversation with a friend, who retired this year, brought it back to the fore front of my thoughts.

The conversation we were having over dinner was some of his ideas for what he would do now that he was retired. Golf was not a sport he participated in over his entire professional career, but now that he had the time, it was a game he was interested in learning to play. Since then, he and I have had an additional discussion about what he would need to get started. And the conversation got me thinking back over my own, somewhat limited golf game.

I was actually in high school when I first took up the game. After we moved to Memphis, my dad suggested that my brother and I should learn to play golf. To my knowledge, my dad had never played either so it would be a learning experience for all three of us. My mother found a set of used, rather old “Ben Hogan” golf clubs in the East Memphis Shoppers News for us to buy and the only other items we bought were golf balls and tees.

One summer day, we headed over to Fox Meadows golf course to play our first round (I think it was a day set aside for beginners to avoid frustrating regulars with the slow play of someone learning). The three of us teed up our balls and each hit our drive. With my dad carrying the bag, we made our way off the tee walking towards our balls. Suddenly, we started hearing the starter announce over the loud speaker that each player needed his own bag. We didn’t know what he meant or whom he was even talking to but since no one came running after us, we kept walking (Not long after that, we learned that each of us needed our own bag and clubs and so my brother and I each bought a starter set.). My only other memory from this less than auspicious start was that I don’t think we were even able to finish that first round of nine holes as we lost so many balls; we had none left to play the last hole.

During high school, my brother and I would golf with some friends from our church. Many Saturdays, we would go to Overton Park to play their short nine-hole course—a great place for beginners like us. This whole time, I never had any golf lessons, learning on my own without guidance or correction of my bad habits. I played some in college with one of my chemistry professors but this didn’t occur very frequently. 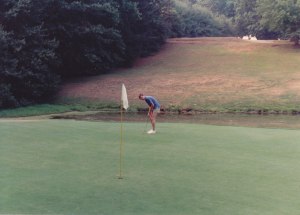 It wasn’t until I started my second job that I really began to play golf on a more regular basis. This was prompted by the fact that the company had a golf league. Each summer, they would sponsor three tournaments and then every two weeks, there would be competition on individual play. In these two-week rounds, you could turn in your best 18-hole game and compete with others in your flight for free golf balls, based on your handicap (I was obviously in the lowest flight). At the end of the summer, the year-end tournament would then pair the top finishers from these two-week rounds.

One year I actually competed in my flight at the year-end tournament. The person I was competing against was a much better player than me and so he had to give me about eight strokes to even our game. I think I gave up all eight strokes on the first two holes. After that he, clobbered me. I don’t remember by how many strokes he beat me but because there were just two of us, I got the 3rd place trophy (the first place finisher had already been decided). 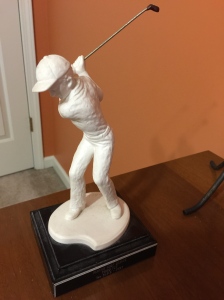 One of the nice things about these two-week rounds was that you didn’t have to play 18 holes at one time. They just had to be 18 consecutive holes on the same course. This meant with summer’s longer days, we could play after work, playing the front nine one week and the back nine the second week. It avoided me trying to find the time on a Saturday to play 18 holes, which was getting more difficult as our kids got older.

Then one time, it came down to the last day, a Sunday before the round closed and I still needed my second nine to be able to turn in my 18-hole card. That day was hot as Hades but I called a co-worker and asked if he would join me. He agreed and so we met at Galloway golf course. I needed to play the front nine and so we able to get off from the number 1 tee. On the 5th hole, a par 3, I made a hole-in-one. It was not the beautiful shot you would see a pro make on television. It was a terrible shot with the ball first hitting in the fairway, a second bounce on the green and the third bounce hitting the stick and wedging between the stick and cup. I joked later that had it not gone in, I probably never would have been able to find my ball as it was traveling so fast when it hit the stick. 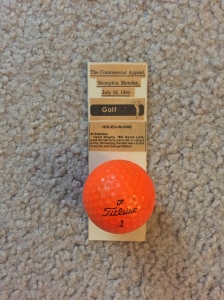 For my ace, I got my name in the newspaper and I still have the ball. Around that time, my father-in-law also made a hole-in-one and he got his ball nicely mounted on a wooden plaque along with his scorecard. I didn’t feel right doing that as the “1” on my scorecard was sandwiched between a triple bogey “7” and a double bogey “6”.

Not long after that, I took a role on the golf committee. Wouldn’t you know it would be the year we decided to play Fox Meadows, where my golfing all got started? Usually, we play our end of the year tournament at a course where we could reserve tee times weeks in advance. But since Fox Meadows was a public course, it was first come, first served on the day of play. Each golfer could reserve two tee times so we had to get a number of us to camp out in the parking lot of Fox Meadows all night to get the 10 to 12 tee times we wanted when the starter showed up at dawn. Needless to so, none of us played very well in the tournament that year.

As our kids got older and took on numerous after school activities, it became impossible for me to play after work and even weekends were typically tied up with things to do. So at some point, I had to give up playing altogether. Once our kids were older, I could have taken it back up but unfortunately I developed sciatica and had to have back surgery. After that, I was concerned that playing would cause my sciatica to return and so I just gave up any hope of ever playing again.

At least until just recently when I had that conversation with my friend. I recalled how much I used to enjoy being out on the course, taking in all of the beautiful greenery and the immaculately manicured fairways and greens. It is exciting to think about playing again.

My first step will be to go to a driving range and see how much I have forgotten. Or how much of my bad habits I have still retained. By definition, I am not a senior citizen yet so maybe in the years I have until then, I can get a good game back and be able to compete with some old men like I used to see playing when I was young, especially since I will be a senior citizen by that time.