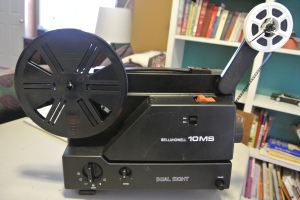 My next idea was to see if Bell & Howell was still in business and had a website. I was pleased to find they were and their website even had a tab for vintage product repair. Excitedly, I clicked on that link but rather than being taken to an online parts catalog, it listed an e-mail address for a company in California with a contact name. I quickly sent off an e-mail message to the person explaining what I needed and almost immediately the e-mail returned as undeliverable.

I pondered for a few days what my next step would be. I decided to look at my favorite toy store—Lowe’s—to see if they might have something that might work. I knew from the remaining pieces that it needed to be a round, continuous band with no metal connector. After unsuccessfully wandering all over the store, I came upon the idea of a plumbing O-ring. I scoured the plumbing section but only found parts that came with very small washers or O-rings. As I was about to give up, I found a rack with packages of large O-rings.   There were three different size packs, each containing several O-ring sizes.   I knew an O-ring wouldn’t stretch as much as a rubber belt so I went with the largest size O-rings.

Turned out my guess was wrong, as all of those were too large. Still determined, I returned the #3 pack and exchanged it for the medium sized #2 pack. The O-ring that seemed to be about the right size was a bit thicker than the rubber belt and I had trouble getting it over the large pulley and then stretching it around the pulley on the motor drive.

I finally got it around both pulleys and then turned on the projector. It seemed to work like a charm. Now all I had to do was wait for it to get dark to see the movies.

My wife joined me for the first viewing. As I fed the first film into the projector, it began to make a groaning noise and soon after gave off a burning smell—like the smell you get when a vacuum beater bar sucks up a spool of yarn—as if the O-ring was binding up on the pulleys, no doubt due to the O-ring’s wider girth in comparison to the slim, original belt. But it didn’t break and even though sounding labored, the projector continued to run.

We started with some of the small, unlabeled reels just to see what they were. I seemed to recall that the reason we stopped using the camera was because some of the films we shot were all washed out, probably due to the outdoor filter not dropping into place. And sure enough one of the first ones we watched was that way. But in spite of the poor film quality, it was precious images of our youngest son’s first birthday and him taking some tentative first steps in our backyard.

We watched a few more movies, at least until the rewinding and change over from one reel to the next for just three minutes of action got too tiring. These unlabeled reels turned out to be our youngest son’s first and second Christmas. In one of them, we were surprised to see my oldest sister with us on Christmas morning, a visit neither my wife nor I even remembered. As we watched our youngest son climb the stairs of my in-laws house, we were amazed at how much he looked like his daughter—our first granddaughter. And when we saw him “monking” in his baby bed, it was a dancing motion exactly like I had seen his daughter doing just a few days before.

The next night, we decided to watch some more of these movies. I had just loaded a reel and gotten it started when the projector bulb suddenly burned out. That item I knew I wouldn’t find wandering the aisles at Lowe’s (fortunately, turns out that is an item available for purchase online from a bulb source).

But seeing our kids in these movies and even much younger versions of ourselves, we knew that no matter what the cost of film transfer, that these were treasures that must be preserved and shared with our kids so that they too could show their kids moving images of themselves when they were young.