This is not a story of the ubiquitous little black book that men used to carry that contained women’s phone numbers they could call for arranging dates. No, this is actually the story of a big black book. It is a book my parent’s wrote to tell the stories of their lives together for all of their descendants—my siblings and me and their grandchildren.

In fact it is dedicated to the “fruits of their union.”

Sometime after my dad retired, my parent’s decided to write their story together. “The Black Book”, as it has become known, is a tension-clasped binding of what appears to be manually typed pages. At the end is a collection of old photos showing my parents at different stages throughout their lives and us four children as well. It’s a story of all our lives, at least through 1996 when it was finished. 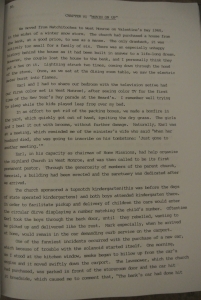 I have had this book for almost 20 years but recently reread it for at least the third time. After my mom and dad died in 1999 and 2002 (respectively), I realized that other than from the memories of my siblings, this was our only source to go to recall facts about our parents and ourselves. And on multiple occasions, I have gone to it to check a fact or see if a certain story was included.

The book begins with a multi-page pictorial family tree on both sides of their families, tracing back seven generations to the late 1700s in Europe. I recall my mom doing a lot of this ancestry research in the 1980s. This was manual research on location poring over hand written county records of births, deaths, and marriages, since the online research tools we have today did not exist in the early 1980s. 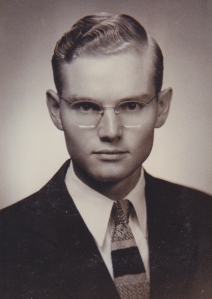 While the book was written jointly, my parents individually author the first two chapters. First my dad tells his story from his birth through college and seminary and then my mother similarly tells her story from birth to adulthood. It is interesting to read the little stories that each of them recalled from memory to tell about. Certainly big, significant events such as grave illnesses—snake bites and episodes of scarlet fever and pneumonia—that occurred in their families but also small, what would seem almost insignificant memories such as the inedible homemade ice cream one hot summer made from the milk of cows that had been grazing on bitterweed. There were also tales of hardships growing up, each having been born just three years before the great depression. 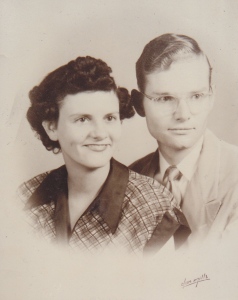 Following these two chapters, the narrative turns over to my mom’s voice as she tells of the first churches for which my dad was pastor. One funny story (although I’m sure it wasn’t funny at the time) was when prior to building a permanent church, my dad was preaching in an old dairy barn and a snake slithered through a hole in the wall. He couldn’t see why the congregation all of a sudden was very focused on him as they could see the snake but Dad could not.

As my mom relayed the narrative of each of these churches, she interwove the story of the birth and early years of each of us four siblings. There were some stories I had to laugh at, one in particular when my sister declared that her dad drank beer, whispering root beer under her breath. I’m sure some of these stories were ones my mother vividly recalled, as they had to have been conveyed to her by someone in a somewhat embarrassing way.

I also loved my dad’s comment when I turned down a summer job working in the Assembly Inn at Montreat that I really had wanted but didn’t pay very well. Having recently bought a car, I needed a job that would help me pay my monthly note. The job I took instead was going to be selling ladies’ shoes at Goldsmiths and my dad’s comment was that I should obviously learn aggravation early.

As I read, most stories didn’t evoke visual images in my mind until the story about our car that wouldn’t turn off. Over the weekend, the car had developed a problem with the solenoid and couldn’t be turned off with the key. To stop the engine, Dad had to open the hood and disconnect the battery terminal. Before we could get it fixed on Monday, I distinctly remember him doing just that one Sunday morning when we went to church to turn off the car and then after church, reconnecting the battery to get it started.

A visual image I recalled with dread was the time (it must have been more than once) we had to go to our sister’s piano music recitals; oh how I hated those. 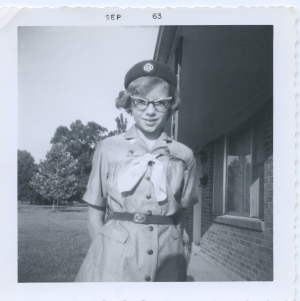 A pleasant visual image though was of the mountain of Girl Scout cookies stacked in our living room for my sister’s entire troop.  Since our mom was the troop leader, our house became the cookie warehouse. My brother and I thought we were in heaven going in and opening whatever we wanted. No telling how many boxes of Girl Scout cookies my mom ended buying that year.

But it was with sadness that I read that my dad had to conduct the funeral of both his parents and his oldest brother, a fact I had forgotten about. My dad didn’t mention his emotions but I’m sure those were three of his hardest funerals.

The final paragraph in the Black Book reads:

“Since our life is a work in progress only you will know the final outcome. Hopefully, these pages will help you to understand and appreciate the past, live in the present, and anticipate the future. Have a good life!” 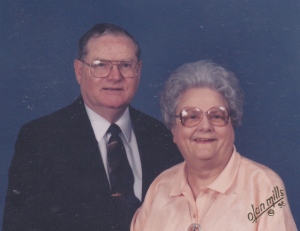 Sadly the final outcome came too soon as these words were written just three years before Mom’s too early death and six years before Dad’s untimely death.

Following their narrative is an Epilogue explaining that all their funeral expenses have been prepaid. It also explained why they chose to be buried at Alabama Church since it was in that area of northwest Louisiana that Dad served churches for 16 of his 40 years of active ministry. The Epilogue ends with a call for us siblings to return there “…to strengthen family ties with both the living and the dead.” My siblings and me made a trip to visit their graves and camp Alabama in 2011.   After reading the Black Book again, I realize a return trip is overdue.