By the time you read this, many of you may have already had your fill of Christmas music as so many retail establishments began to blare these songs over their loudspeakers soon after Halloween attempting to get you in the gift-giving spirit in order to whisk dollars out of your hands and into their holiday cash registers. But even though Christmas is over, I felt compelled to visit it one more time from a nostalgic perspective.

Earlier this year, I wrote about all the different types of music I had grown to love and enjoy over my lifetime. Soon after Halloween as I too began to hear Christmas music played, I realized that I had not mentioned this particular variety. And unlike the other music genres I wrote about, Christmas music is one that has endured my whole life.

My earliest recollections of Christmas music are of singing them in church as a youngster. With high anticipation of that magical day, I would happily sing the songs each Sunday, as we got closer to December 25th. Outside of singing them in church, I can’t recall if my mother had Christmas albums that she would play at home. Once I was in high school, due to family logistical reasons, we began to open presents on Christmas Eve and I remember we would sing a Christmas Carol or two before the present opening began.

When I got married, I realized that I had not brought any recorded Christmas music into our marriage and so I had to begin to remedy that.

This was probably the first recording I bought of Christmas music. But recognizing that I couldn’t just listen to the same tape over and over, I knew I needed to add more to our collection. Since going out and buying a large number of tapes was not in our budget, I decided that I would add one new recording each year for Christmas.

It’s a good thing I couldn’t afford to rush out and buy a large number of cassettes, as it was about this time that music CDs began to be released, a much better quality and durable media. But using the same strategy, I purchased at least one new Christmas CD each year. 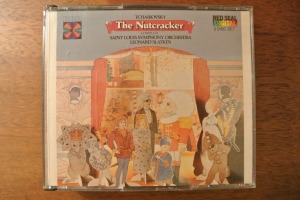 It was listening to the “Dance of the Sugar-Plum Fairy” that got me interested in Tchaikovsky’s The Nutcracker. And for a while, this love grew into an annual pilgrimage to a live performance that my daughter and I would attend. This ballet and its music are still special to my daughter and me as is the wooden character upon which the music is based.

And it’s this music she and I listen to as we wrap presents early in December.

Over the years, our Christmas music collection has grown to include many different genres:

Some religious favorites such as “Silent Night” and “Away in a Manger” as well as traditional songs such as “Frosty the Snowman” and “Jingle Bells.” 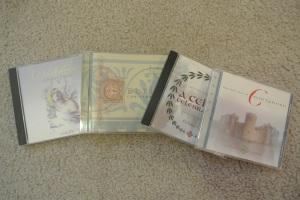 When I became interested in New Age music, I collected some Christmas recordings of that style as well. 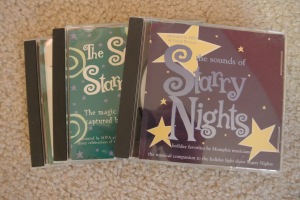 For many of the years that we visited Starry Nights, a drive through display of Christmas lights, we would receive a recording of Christmas songs by local artists. 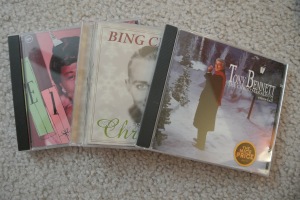 My introduction to Jazz music prompted me to collect some Christmas recording from Jazz artists as well.

And when this movie came out, its sound track offered a great compilation of a variety of Christmas favorites. 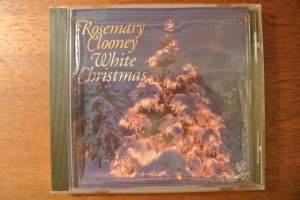 But in spite of having a large selection from which to chose from now, there is one song that I love the most, one that I can’t hear too much, one that I always wax nostalgic upon hearing with images of approaching a snow-covered country home with single lit candles in every window: “I’ll be Home for Christmas.” Being my favorite Christmas song, I have collected recordings by Wayne Newton, Andy Williams, Tony Bennett, Bing Crosby, Reba McIntire, and Rosemary Clooney trying to find just the right one. 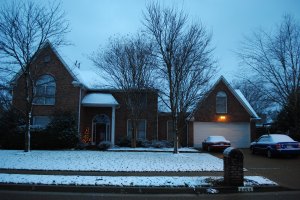 Maybe it’s the loss of something I’ll never reclaim that prevents me from finding just the perfect recording, the one that I will exclaim, “Yes that’s it!” But even so, I know I will continue to try because I know that it is I longing for my family and I to be home for Christmas, now and always.