It is hard for me to stop thinking about our recent trip to Amsterdam since we had such a wonderful time. And it was also special because it was a first visit for my two sisters and my sister-in-law who by my observations had a great time as well. Over dinner one night, the person I teach with and who has also been to Amsterdam more than two dozen times made an interesting comment. He said that outside of his hometown, he probably knows Amsterdam better than any other city in the world. It made me take pause and then I realized that that statement was true for me as well.

For almost twenty years, Amsterdam has been an annual (and sometimes semiannual) business destination for me since it is one of the main cities we teach our course in. While each visit there has been for business first, I have always managed to squeeze in some vacation time before and after I teach. And this has allowed me to become extremely familiar with the city, a city so easy to navigate on foot.

The city center of Amsterdam is laid out into a series of ever widening, concentric canals, fanning out from Central Station where I usually arrive by train from the airport. 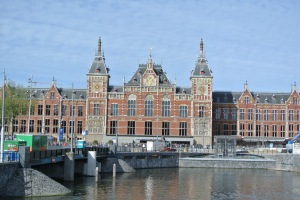 Because of the narrow roads that run along both sides of the canals throughout this area, very little car traffic is present which makes walking very easy—that is as long as you watch out for the multitude of bicycles zipping around you.

Prominent signage listing the name of each canal (e.g., Prinsengracht, Herengracht) is clearly visible on the side of buildings at street intersections so you can easily orient yourself whenever you come across a canal, thus making it difficult to get lost. After so many visits, I never need to leave my hotel with a map since I know the area so well.

Amsterdam has an overabundance of cultural sights to visit and some of the best-known museums in the world providing for any number of different choices on each trip to the city.

Amsterdam also has the most diversity of ethnic food choices I’ve ever experienced in any city. In the past, I have been asked upon my return if I had any authentic Dutch food and beyond raw herring sold from the little stands along the canals (which I refuse to try), I was hard pressed to even describe what Dutch food would be. Given so many delicious ethnic choices, I’ve never even sought out Dutch food.

I’ve often told people I meet who have never been to Europe that they should make Amsterdam their first destination since there is so much to do, it is so easy to get around, and if you need help, everyone speaks English. Being the city I have most frequently traveled to, it just makes sense that it too, would be the city, beyond my hometown, that I would know the best—the one where I have vacationed the most. So this realization has gotten me focused on a new task, actually, a new twist to a long time goal.

Over the multitude of trips that I have made, I have always wanted to find a print suitable for framing that showed a typical Amsterdam scene—narrow canal houses serenely reflected in a calm canal with bikes and boats out front. In all my trips, I have yet to find just the right print and this past trip was no exception again with my searches proving fruitless. But then I realized, that after so many trips, my wife and I probably had some fairly decent photos we had taken that would fulfill the need.

Several years ago, we had some of our photos from a trip to Keukenhof gardens (outside Amsterdam) professionally framed and hung in our home. This now served as my new inspiration for finding four photos of Amsterdam that we can again professionally frame and hang in a grouping at our condo. I have written before that, I always feel like I am on vacation when I am at our condo. What better continual reminder of vacation than to grace our condo wall with our own photos of the city we vacation the most often, the place we know better than any other.

I’ve got the first one picked out, a scene I have photographed on more than one visit trying to get just the right shot. Now we just have to find three more, obviously with the help of my two interior design consultants who helped with our Keukenhof flower grouping.