Growing up, family vacations were a very special time for my three siblings and me. With our father being a minister and the additional weeknight and weekend activities that came with that profession, vacation was the time when all four of us were together with both our parents for undivided fun. Even though many of these vacations were actually “working vacations” for my dad, we still had a very special time (interestingly, many of my own vacations over the last 15 years have also been of this variety).

My earliest memories of vacation are of a place so special, that it deserves a post all by itself. But other early vacations from the 50s and 60s, I only have my parent’s black and white photos as a reminder since I have no memory of them. 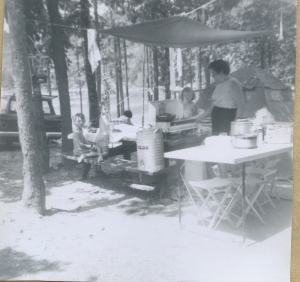 In order to save money, many of these vacations were camping trips. For us kids, camping out was a blast although we did enjoy staying in hotels the times we got to do that too. Through a child’s eyes, I didn’t recognize that camping was a lot of work for my parents, especially my mom. Since my mother cooked all of the meals at home, it didn’t occur to me that she wasn’t getting a vacation from her daily chore on vacation. And while washing clothes at a Laundromat was a fun adventure for us kids, it was probably a lot of extra work for our mom. But with my adult’s eyes, I know now what a lot of work it was (which is probably one of the reasons I am not that fond of camping even today).

Growing up, our parents did a great job of taking us to the historical places that help kids learn about the history of our country. I don’t recall if we did this all in one trip or two but we went to Washington, DC and Virginia. In DC, I remember the thrill of going to the Smithsonian Air & Space museum since I was so interested in science and airplanes. We also visited the Capital and each of the president’s memorials on the mall.   I recall looking out from the top of the Washington monument after waiting in a fairly long line and being amazed at the view.

We went to Mount Vernon, George Washington’s home on the Potomac, and I could not believe how people of that era could sleep in such small beds wedged into the wall. I assumed they must have been very short people. At Monticello, Jefferson’s home, I was fascinated by all of the interesting inventions Jefferson created and installed around the house.

And in Jamestown and Williamsburg, we toured all of the colonial sites of early American significance. Having since visited most of these sites with our kids, I cannot fully sort out which of my memories are from my childhood and which are from when I was an adult. But sometimes, it is quite amazing what events we have vivid memories of.

In Williamsburg, I remember going to an outdoor glass blowing factory where pieces of glassware were being made by hand using the traditional method by supposedly decedents of the pilgrims who would have lived there in the 1700s. My mother liked to collect souvenirs from our trips and at this location; she wanted to purchase a small, hand blown vase. I have no idea how much it cost but it must have seemed quite expensive to my dad as the two of them had a heated argument about buying it. My mom, whose frequent expression was she would purchase the Taj Mahal if she could buy it on time, won out and purchased the vase.

After our parents died and we four siblings were going through the house picking things we each wanted, it was this vase I selected to bring to my own home. Since the time of its purchase at least 50 years ago, it has been dropped, broken, and repaired several times but today it remains a physical talisman to my childhood that still brings to me fond vacation memories of my parents.

After we kids were older (and obviously easier on a long trip), we went out West to see the Grand Canyon, the Painted Desert, & Carlsbad Caverns. The enormity of the Grand Canyon amazed me. Carlsbad Cavern was fascinating, as so many beautiful structures had naturally formed under ground. We even went back at sundown for the nightly bat flight, which was so thick, it appeared like a smoke column rising out of the mouth of the cave. And retuning to our hotel, I remember we came across a movie crew filming a scene from “Gargoyles” that took place in the area.

Another long trip out west took us through Pike’s Peak where we had a snowball fight in the middle of the summer and as far west as Albuquerque, NM where we met our sister who had driven over from CA.

One trip out west, my parents drove all the way to Los Angeles. I unfortunately didn’t make this trip, probably because I was in high school and already had a summer job. As it turned out, missing this trip meant I never got to Disney Land as a child, a fact that was only corrected this past December when my brother and I went to Disney World together for my first ever visit to a Disney theme park.

These were great vacations and I have great memories of having fun on all of them. But whenever my siblings and I think of vacation, it is not one of these trips I’ve mentioned that comes to mind first. No it is Montreat that is foremost in our minds whenever we talk about vacation. This is where we spent most of our vacations and thus where most of our memories are. And Montreat is a vacation story all by itself.