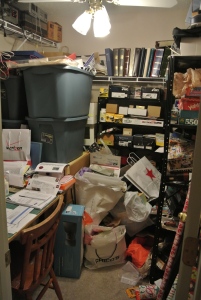 It was last fall while I was watching college football that I planned to “multi-task” and clean out this closet. Beyond just the fact that this closet had gotten completely out of control, my real motivation was to clear out the closet so that I could repair the water damage to the ceiling that had occurred over a year ago when we had a roof leak. Since the ceiling was textured with a hard to match “popcorn” finish, I decided to scrape off all of the popcorn, and give the entire ceiling a smooth finish.

At that time, the first thing out of the closet was a box of old photos that made me pause from my true goal. After perusing the contents of this box, I realized that there might be other treasures hidden in this bursting at the seams closet. But it wasn’t until March Madness rolled around this year that I got back to the task of cleaning out the closet. Only this time, to ensure I accomplished the ultimate goal, I emptied the closet and made the repairs first. 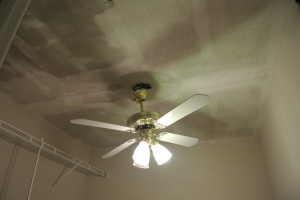 Once the ceiling was repaired, the closet was ready for storage and I began my treasure hunt.

I found many of the items could simply be thrown away. It seemed like I had saved the box of every Apple device I had ever bought, some of which I didn’t even own any more. And it seemed like a store of old computer equipment was hidden, that with hard drives now removed, will be heading for the e-recycle center. Much more detritus was uncovered as I went through the closet contents that made its way to the garbage. But among the many items for potential discard, I discovered many hidden treasures.

Inside a plain white envelope with a price of $1.50 stamped on it, I found my first grade school photograph. It was so large; I couldn’t even fit the whole photograph on my scanner. Interestingly, I also found an empty frame in the closet that was the exact size. Maybe I had planned on framing this many years ago and just never got around to it. 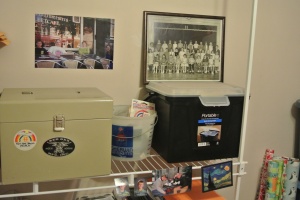 So it seemed appropriate to place the photo in the closet from which it came.

Among the electronic devices headed for the e-recycle center, my son found a functioning VHS tape player. With it, he is still going through the multiple boxes of tapes but one discovery he has already made is a video he took of me when I was test driving and purchasing my red Miata over 13 years ago. 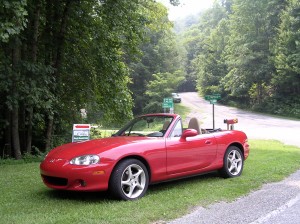 I also found my old basketball brackets going back to 2007 where I would chronicle the winners throughout March Madness. 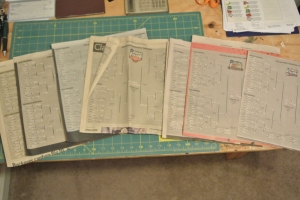 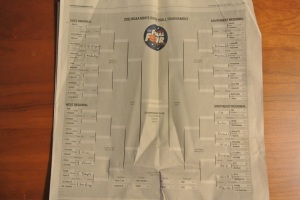 Obviously I lost interest fairly early this season, no doubt due to an early exit of my favorite team, Memphis. 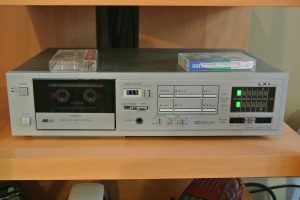 I even found the tape deck my brother had when he was in college. He had given it to our parents to use many years ago and it made it to my house after we were cleaning out our parent’s home following the death of our dad. I hooked it up to my multi-media system to see if it still worked. The first tape I tried produced no sound. Not one to give up easily, I tried another tape, which proved to be the greatest hidden treasure find from our closet.

As the tape labeled “Audio for Family Video” began to play, I was shaken to hear my dad speaking to us—from beyond the grave so to speak. He had recorded this narration of our home movies sometime after our mom died. She had written the text but never put it on tape. So my dad typed it up and read it as he recorded.

A little bit of background: a number of years ago, my sister took all of our parent’s old home movies of us growing up and converted them to VHS tape. Watching the home movies sometime after that, my mom wrote the narrative. As I listened to Dad’s voice, the first time I had heard it in over 13 years, I puzzled over the silent pauses. And then it hit me; Dad was reading the story as he watched the video in order to sync the story with the images being shown on the video. Upon this realization, I began to visualize the old familiar movies in my mind’s eye as I listened to my dad’s words.

Multiple times, I would tear up as I recalled the images listening to Dad’s voice. And then all of a sudden during one of the pauses on the tape, I could hear my parent’s Westminster clock chime in the background. At that point, I had to take pause myself.

Often whenever I get started on a project, I find it turns out to be a much bigger job than I thought. For this closet project however, it was not the job that was too big, it was the treasures unearthed that was the real surprise. What hour of what day that clock was marking, I will never know, but it along with my dad’s voice is now perfectly preserved for the future.