Our day on Saturday started out pretty early in the morning with a call at 6:30 from our son that contractions were five to eight minutes apart. Contractions had started at 4:30 AM. My wife, now grandmother for a second time, suggested they quickly get showers and head to the hospital. She and I each quickly got our showers and then headed off too.

Whenever we are together, I typically drive but for this trip, my wife wanted to drive us. She claimed I drive too slowly and methodically and a time like this demanded speed, speed, speed. After running one red light in the interest of speed, we arrived to find them already checked in and in a room. My son obviously had his own ideas about speed.

No sooner had we arrived than my son pulled me aside and said I needed to go back to his apartment to pick up someone left behind, his future daughter’s big brother who had unfortunately been left behind in the mad rush to get out the door. 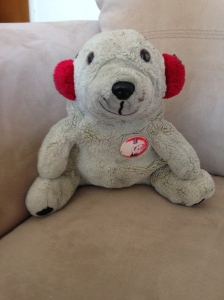 So off I raced back to my son’s apartment since I didn’t wanted to miss the birth. I’m sure I drove a little less slow and methodical than normal and within 30 minutes, I had big brother strapped in for the race back to the hospital.

After about an hour, I was back and ready for the excitement.

I must say that it has been over 25 years since I was in a hospital room for the birth of a child. A lot has changed since then and I was most impressed. The room had everything for the labor and delivery along with a heated crib for the newborn. They never had to leave the room. After a couple of checks by the doctor and nurse, mother was only 20% away from being ready to push. My wife and I, having been at the hospital for about four hours, had time to run for a quick lunch.

When we returned from lunch, it was time to push and we excused ourselves and went to the waiting room. My wife would occasionally text our son to see how it was going but after an hour, it seemed progress had slowed.

While we were waiting, our daughter texted us to say her son—our grandson—was excited about getting to see his new cousin.

Soon after, a friend of our son’s came in and we began to chat with him. About 30 minutes later, they played a nursery melody over the intercom system. At first I thought it was some sort of clock but when I looked and saw it was about ten minutes after three, that didn’t make sense to me. About fifteen minutes later, our son texted us to say his daughter—our granddaughter had arrived. The melody that had played had been for her.

After the new family had had their bonding time, we were able to go back and see the new mother, father, and baby. And just like last time when we met our grandson for the first time, it was my wife who held her first. 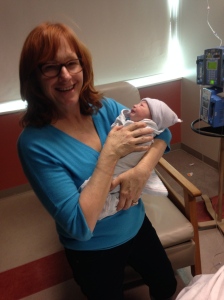 Four hours later, I finally got my turn.

I had never held a baby this tiny. She hardly felt like she weighed anything. All three of our kids weighed more and our grandson was already three weeks old before we got to hold him. But it was precious to get to hold her. And it was exciting to think that she would be getting to meet her new cousin for the first time in just a few short weeks when our daughter, son-in-law, and grandson fly in to meet the newest addition to our growing family. 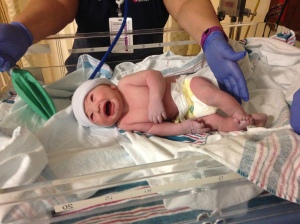 Happy Birthday to our first Granddaughter!

8 thoughts on “On Becoming a Granddaddy – TWO!” Leave a comment ›