If you read my SibSab (Sibling Sabbatical) post from earlier this past summer, you may recall that at the close of that post, I mentioned that my siblings and I had discussed the possibility of making a modification to what has traditionally been just the four of us getting together—specifically expanding it to include other family members.  The impetus for this idea was over the years whenever we held our SibSab in one of the locations where other family members lived, we always included some together time with them as well.  And in that most recent SibSab, we had additionally taken a side trip to Texas to visit our last living uncle as well as some of our cousins, whom for me, are relatives that I had not seen in many, many years.  So, if you have been wondering since then what our next SibSab might look like, your wait is over.  For those of you who prefer a shorter story, the “CliffsNotes” version is that it was the same in some ways and different in other ways. 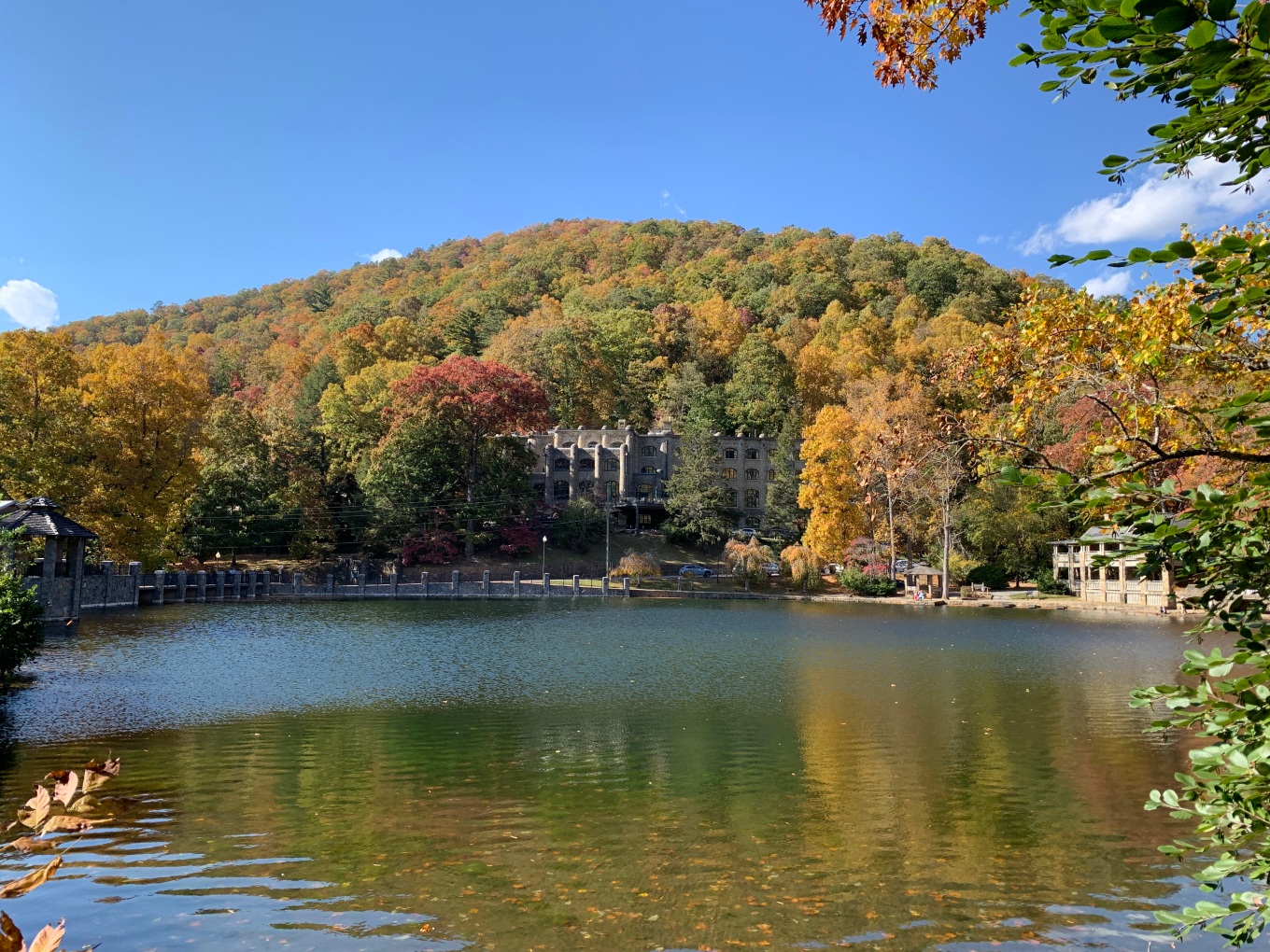 For this SibSab, we once again traveled to Montreat, our favorite place in the whole world, and even stayed in the very same house that we had rented last year during the exact same week in October.  As before, our travel day was on Friday and although we did not all arrive at the same time, we were all together for the all-important start of SibSab on Saturday morning with our traditional extended conversation over coffee and breakfast, a chance for us to catch up while often discussing several important topics—a mainstay of all our SibSabs—even more so as we have aged together.

We then made our way into Black Mountain to do some shopping at many of the usual stores we always go to before heading to lunch at one our favorite restaurants.

In the afternoon, we went back to Montreat where we shopped in the bookstore for t-shirts and hoodies (another tradition) before relaxing on the porch listening to the soothing sound of water cascading over the dam, a most enjoyable activity we have been doing ever since the building was first opened in the mid-1960s.

We later returned to Black Mountain to procure some groceries (and local craft beer for my brother and I to enjoy) as well as pick up pizza for dinner, another tradition.

On Sunday morning, we again started off with our coffee conversation discussing other important topics as we occasionally looked out to try to catch the sun rising over the tops of the mountains.  So, for the first day and a half, our SibSab was just like many before.  But then it was different—in a good way.

Shortly after lunch, my brother’s wife arrived having driven the short distance from where she had been visiting with their oldest son in his college town.  My sisters and I had not seen her since before the pandemic started.  Not having been to Montreat since 2016, there were a number of things she wanted for us to do together and heading into Black Mountain was one of them.  Her other main desire was to take a hike, a steep one.

Hiking up to the top of Lookout Mountain which overlooks Montreat is a strenuous activity the four of us have done for many years.  Although acute age-related ailments have occasionally prevented all four of us from going, it is still something we strive to do together.  On this occasion, I accompanied my brother and his wife to the top. 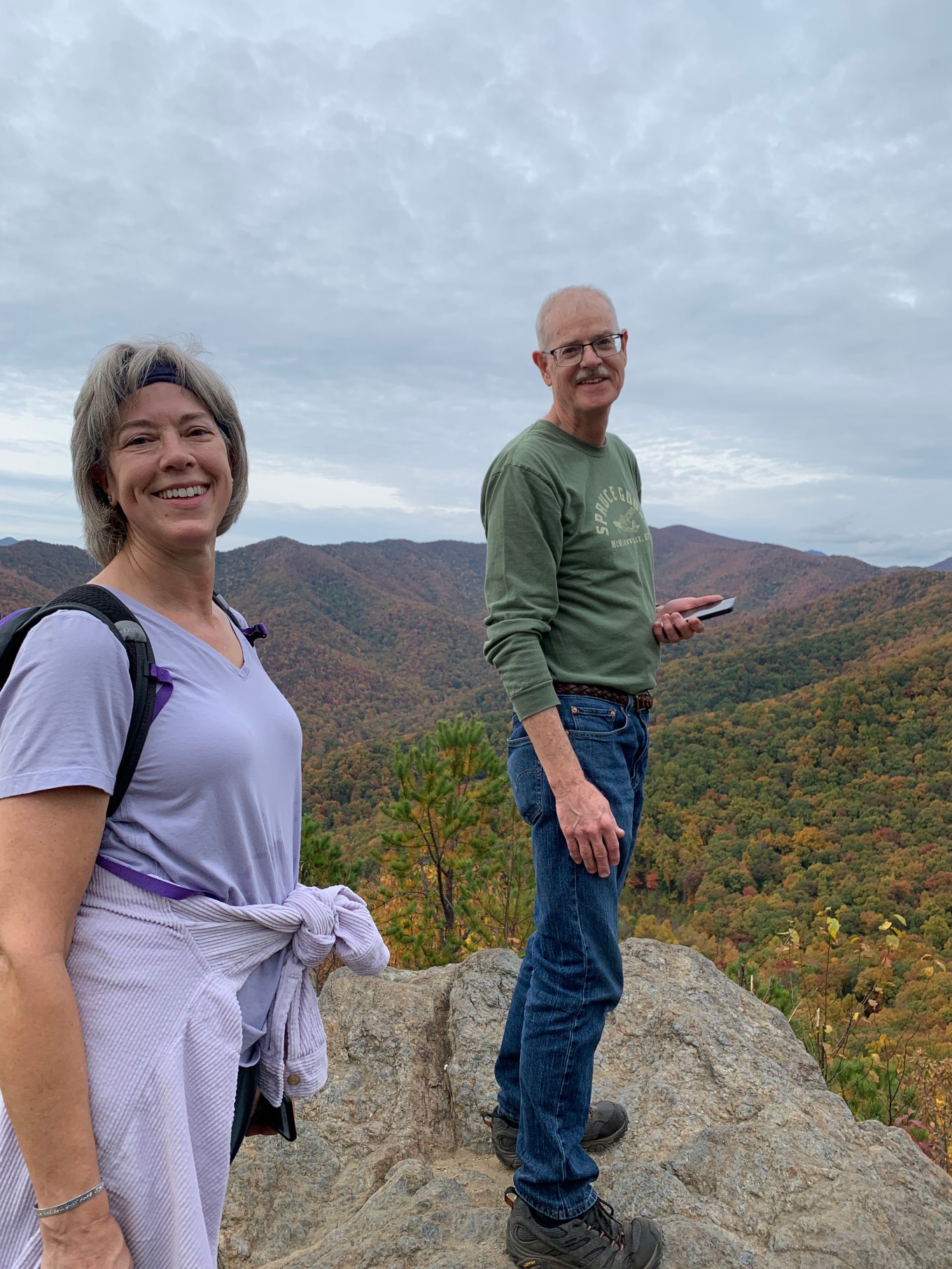 When I checked our ascent time, I was most pleased to see that me, being the oldest in our group had kept up with those younger than me and we had beaten the posted hike time to the summit by more than 15 minutes (27 vs. 45 minutes). 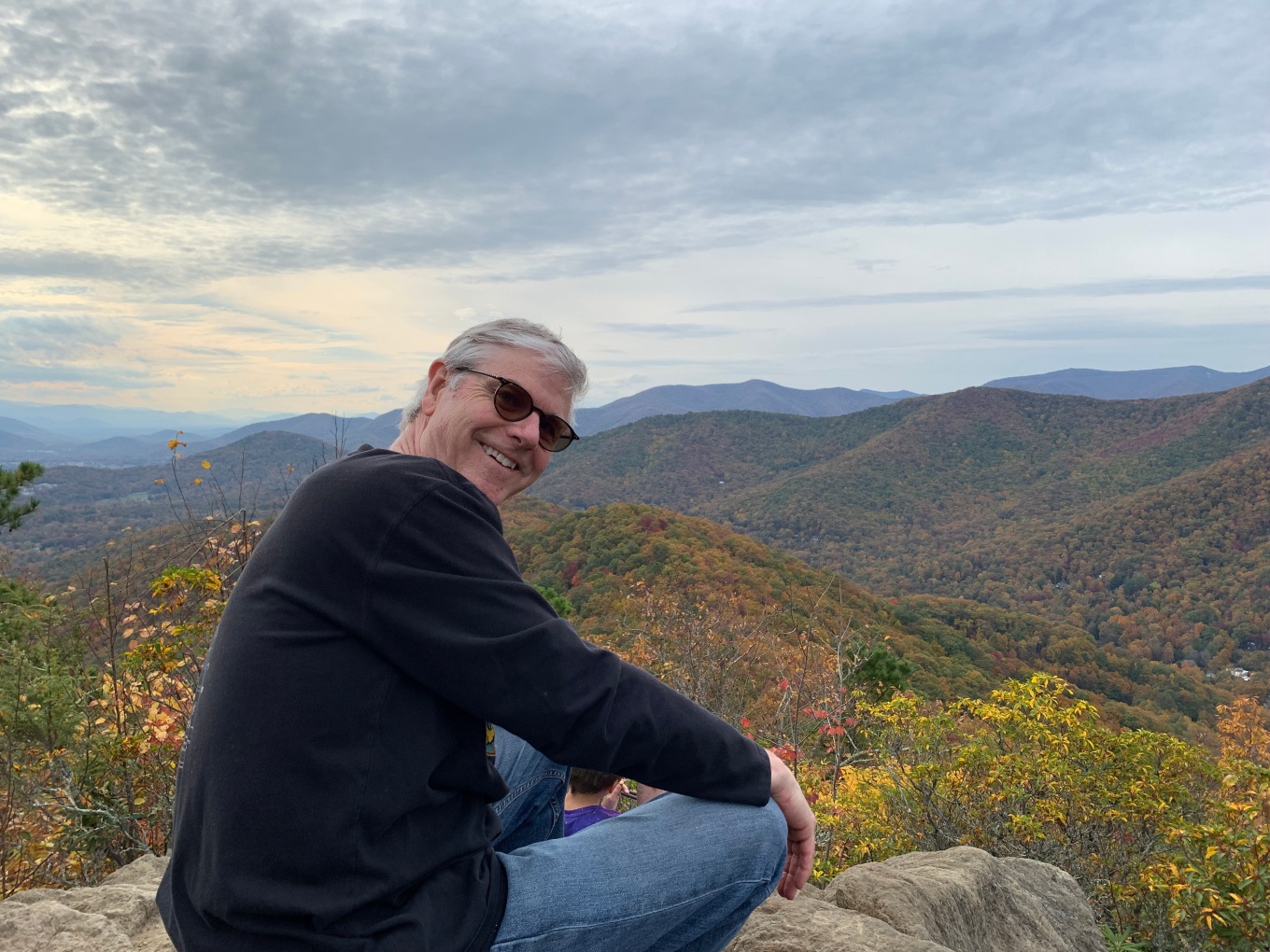 The view was spectacular, and the fall colors were beautiful. 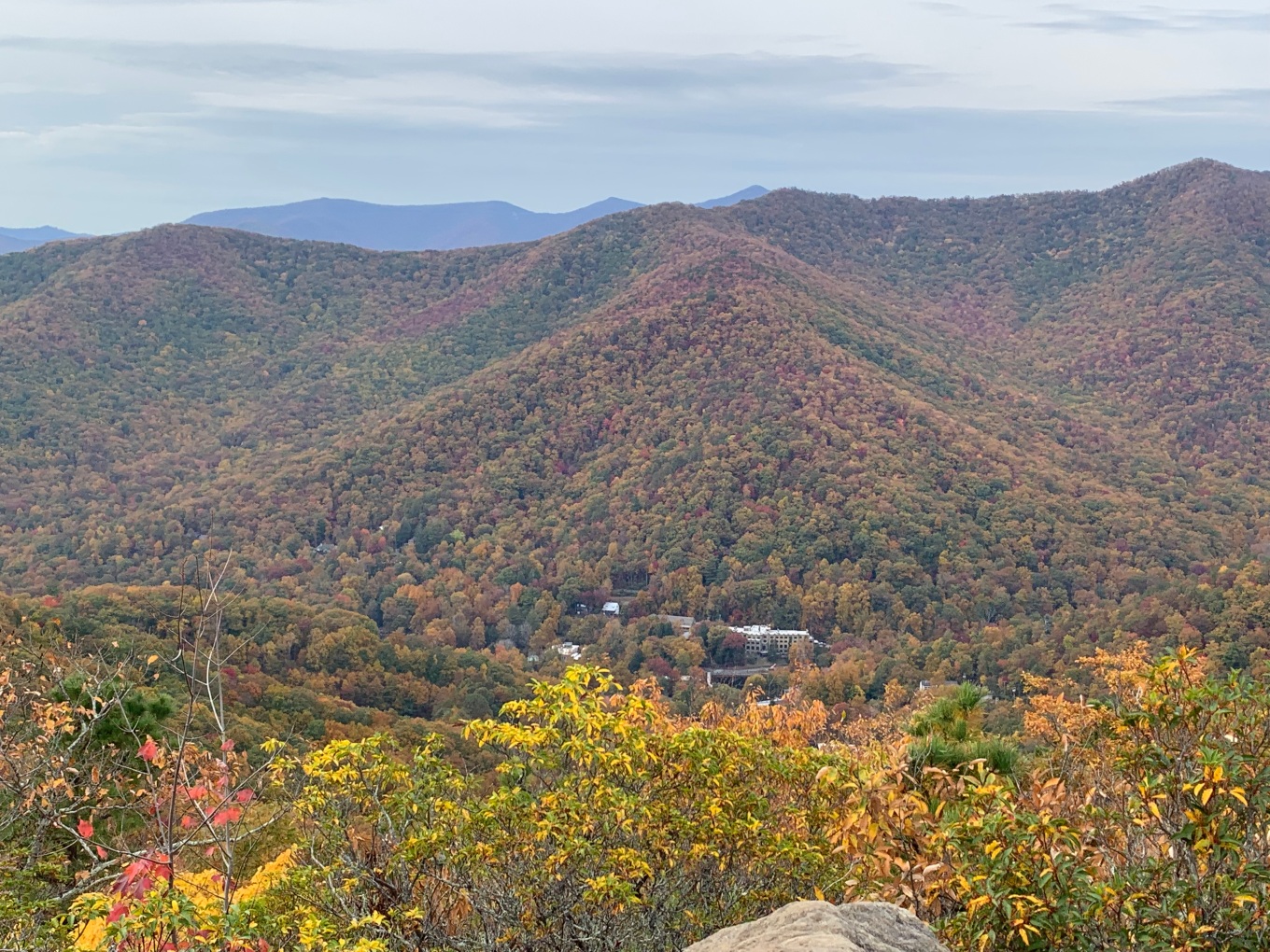 That night, I cooked our traditional steak dinner with my sister’s always requested double baked potatoes… 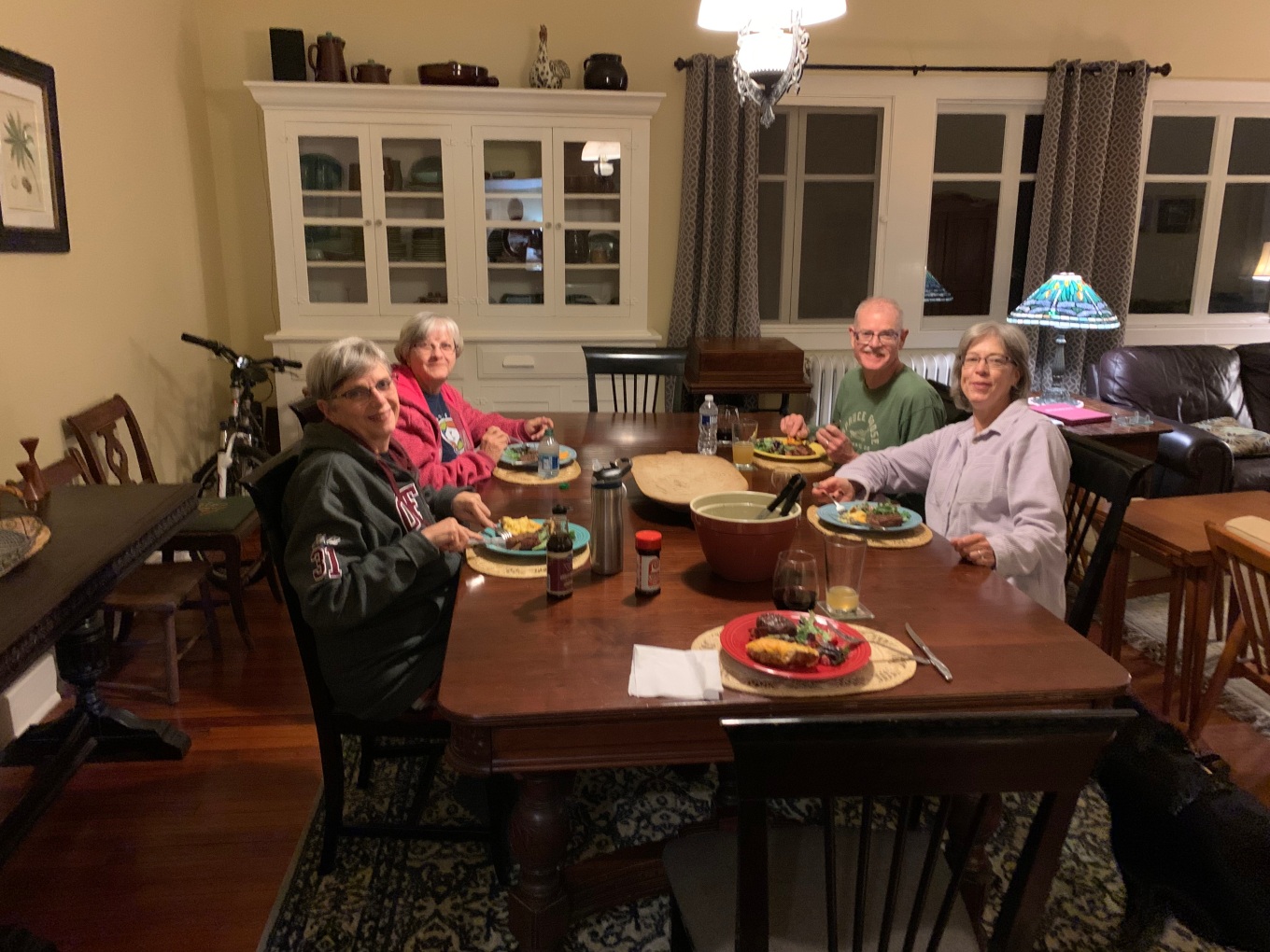 …before celebrating our oldest sister’s birthday, a couple of weeks early.

Growing up and traveling to Montreat in the summer, we often celebrated my other sister’s birthday so having another birthday celebration continued another long-standing tradition.

On Monday, work obligations required my brother’s wife to return home but then some more of our old traditions from growing up kicked in.  For a significant part of that day, we just sat around reading, at least until my brother and I decided to go take in an adult beverage (or two) at a local craft brewery in Black Mountain.

When we returned, our sister had built a fire for what would be for some of us, our first campfire grilled foil dinner since growing up and camping in Montreat.

Once we had a good bed of coals, she tossed them on to cook while we continued to enjoy the warmth of the fire as the weather turned colder.

When we opened them up, we had a delicious dinner. 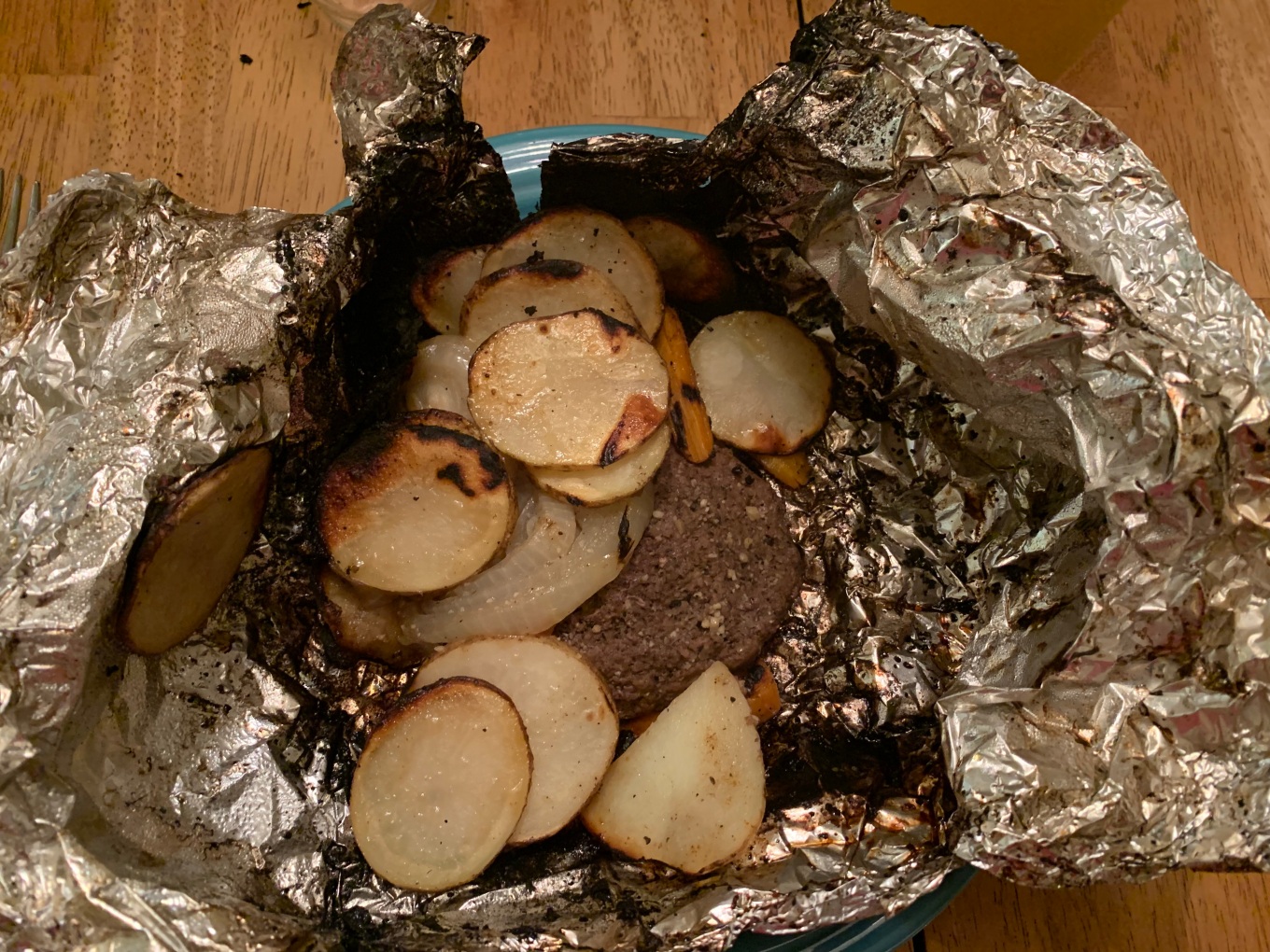 On Tuesday, our last day together we awoke to a much colder day.  For my oldest sister and I, it was too cold to even consider a walk.  So, she and I drove down to the Moore Center (building with the bookstore and porch) to meet our brother and sister (who had hiked over) to enjoy for the first time in I don’t know how many years, a burger at the grill we always looked forward to eating at growing up. 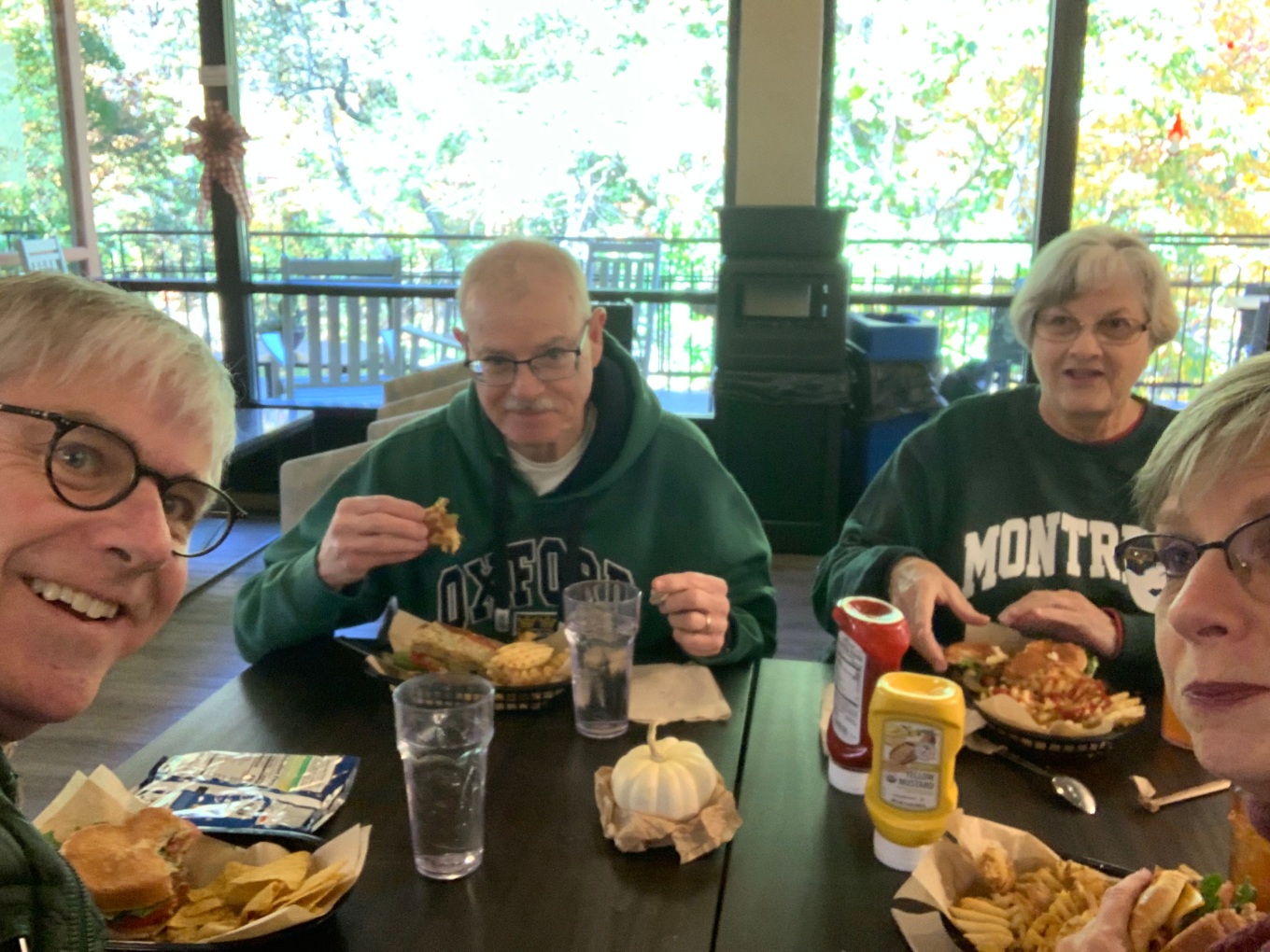 It was particularly enjoyable as the grill had been closed since the pandemic started and, in the interim, had been very nicely upgraded from what it used to be. 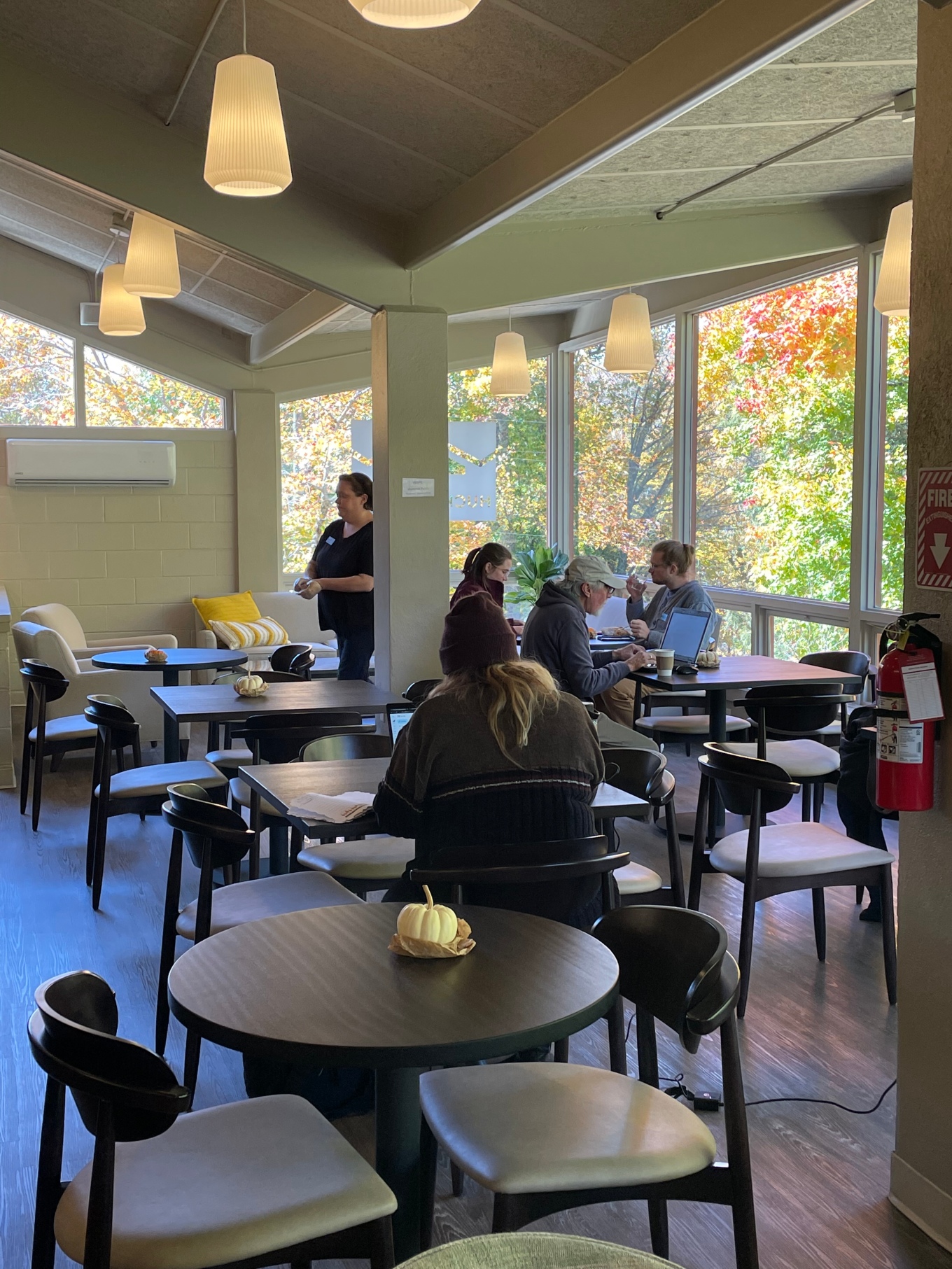 After visiting some other familiar sites in Montreat, we went back into Black Mountain for our last dinner together, at another of our favorite restaurants. 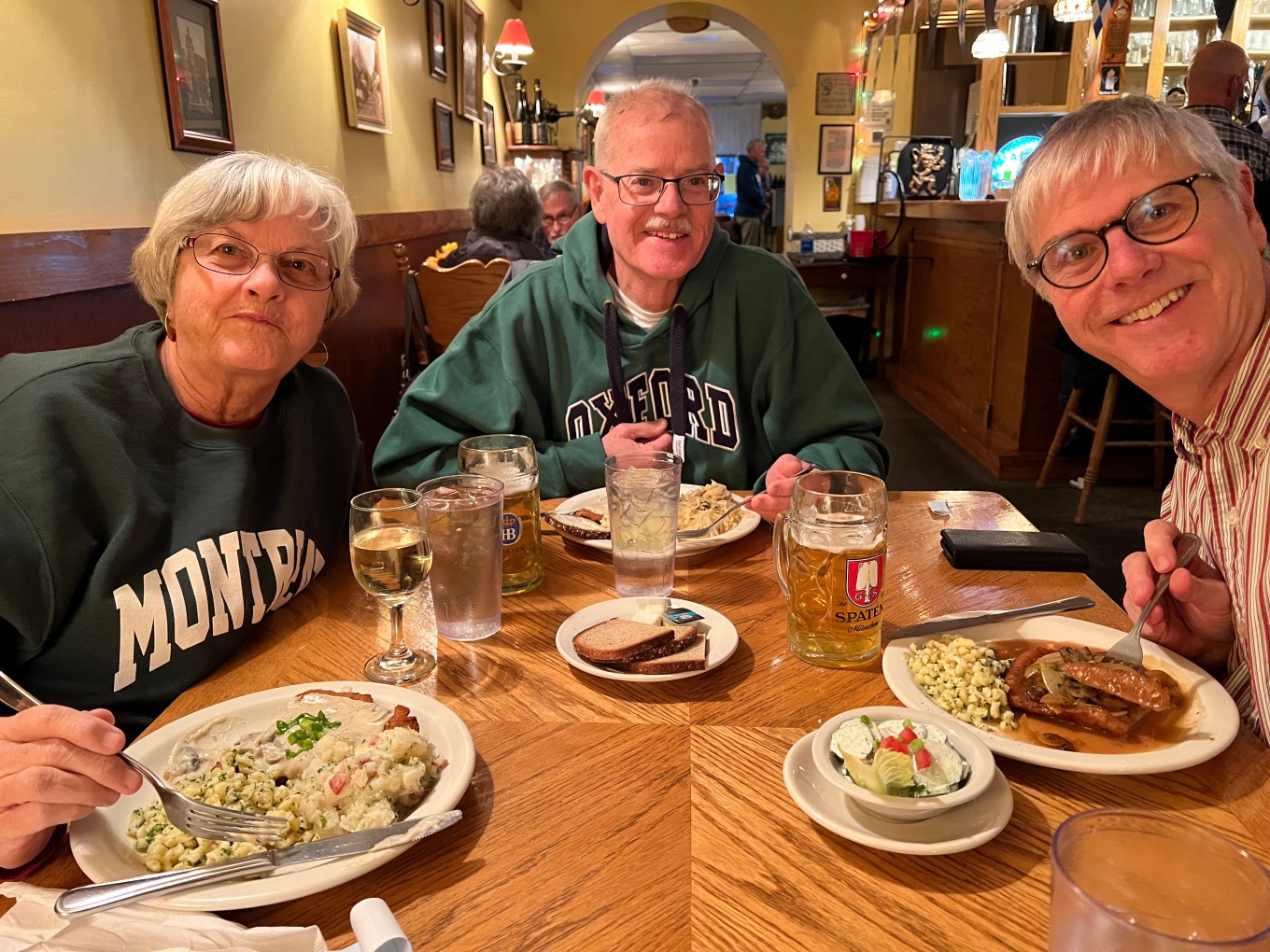 It was sad to be saying goodbye after packing up our cars on Wednesday morning.  We had had such a good time; we had almost forgotten to take our traditional SibSab photo, but I remembered and managed to snap one outside just before hopping into our cars. 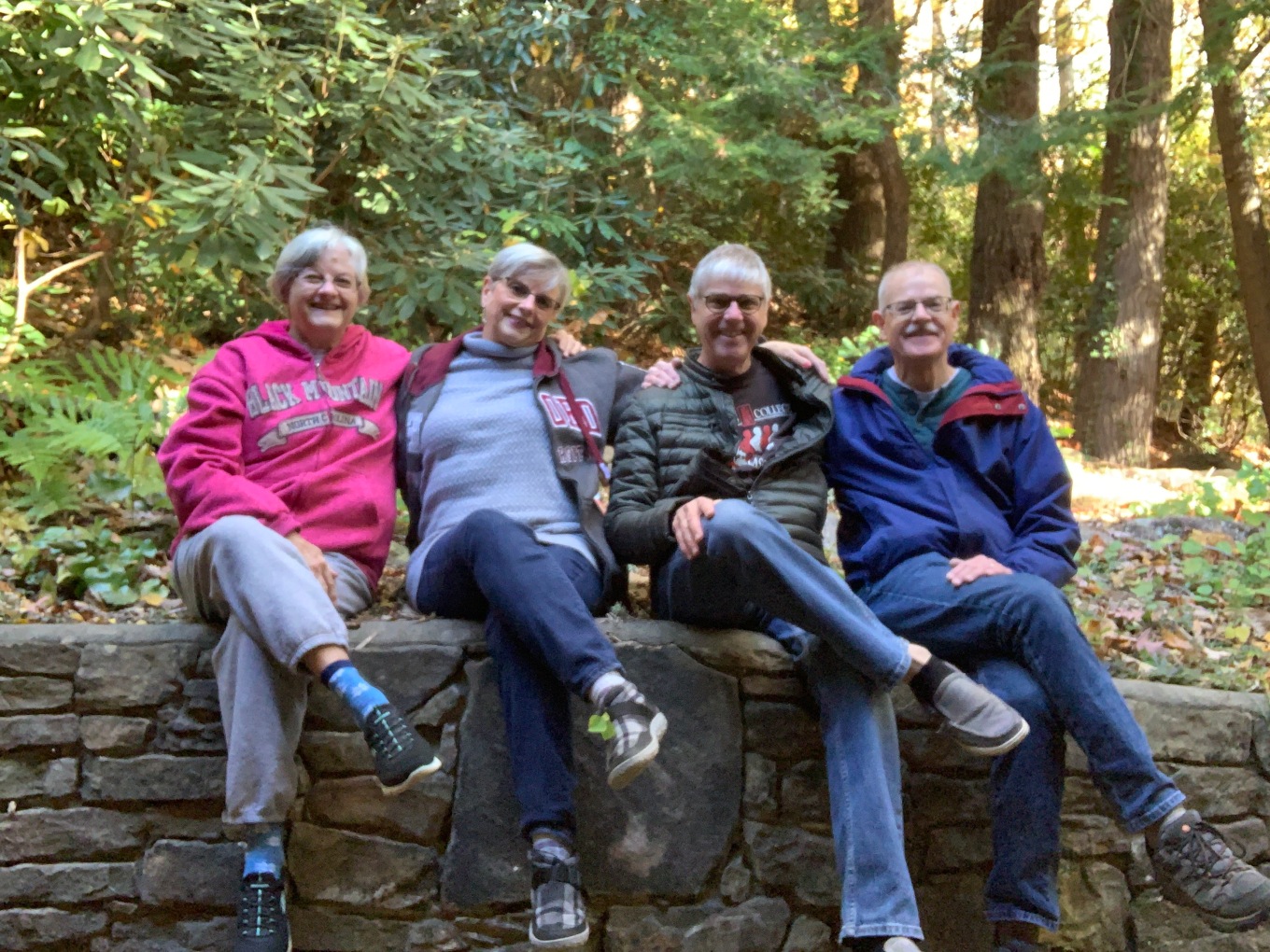 As always, our drive home afforded ample opportunity for each of us to reflect on our time together.  I know I can only speak for myself, but I suspect my siblings would agree that it was another absolutely great SibSab!  It provided us a chance to renew our sibling love for one other while experiencing old traditions but then, at the same time, introducing some new things with the visit of our sister-in-law.  I feel it opened the door for other family members to join in the fun and hopefully next time, the timing will work for my wife to join us as well.  Until our next SibSab, we will have to resort to virtual visits with each other.