Do you happen to have a home with a separate, formal dining room?  If so, do you frequently use it?  My wife and I have been married for over 40 years and in all three of the homes we have owned (including our current one), we have had a dining room complete with typical dining room furniture.  But it has been rarely used for that purpose.

In this photo taken in 2003, our dining room became a temporary art room where my wife and her life-long friend hand painted wine glasses cranking out quite a few.

Sometime prior to 2005, we repainted the room from its original beige and green colors to a vibrant red adding additional dining room furnishings.

But still, we rarely used it often preferring to dine at our kitchen table nestled in the bay window overlooking our backyard pool.

After both my wife’s parents died in 2006, she inherited additional pieces which created an even more formal dining room.

And one time that I can recall we used it was in 2014 when we needed additional space for a large party that could not be accommodated at just our kitchen table. 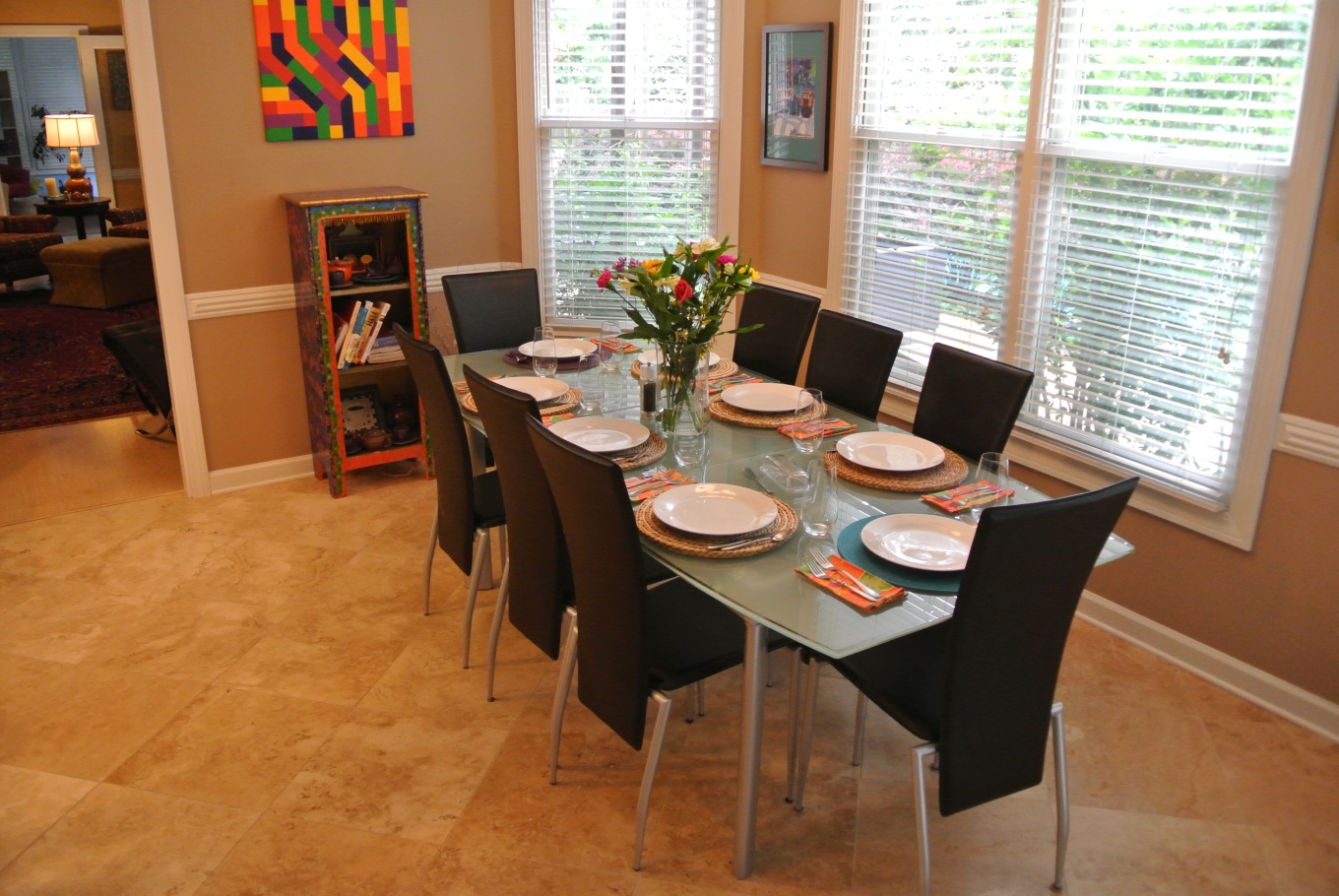 Over the years, my wife has often considered other uses for this seldom used room: a library, a reading room, a yoga room.  So, it was no surprise to me this year when she decided to take specific steps to turn it into an as yet-named room.

The first step was to find a new home for the dining room furniture.  Next came the selection of a new rug…

…and then some comfortable chairs. 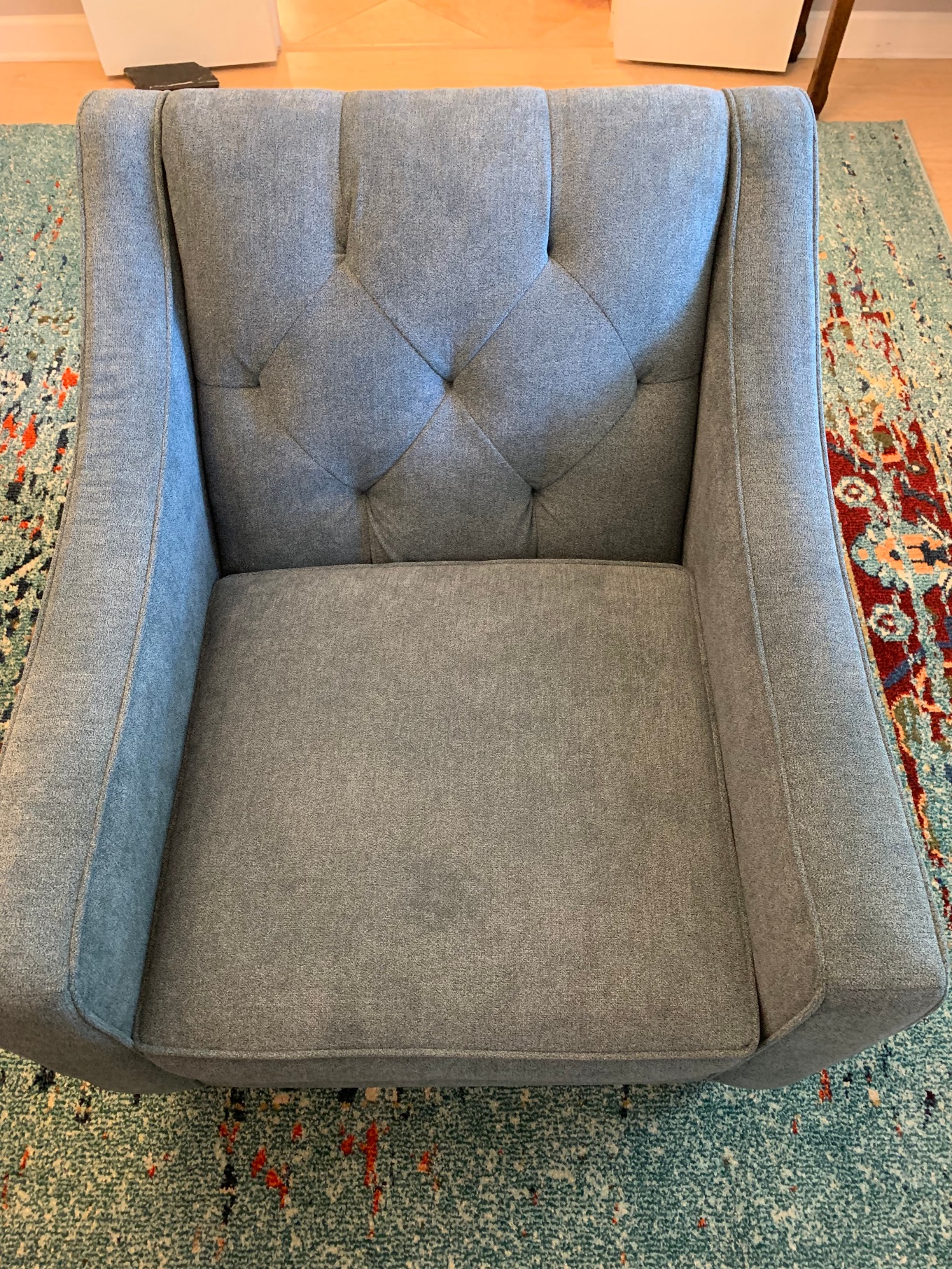 With those selections made and procured, one of the most challenging steps was to then pick a color to paint the room.  Early on, she settled on a grey color, but then which grey became daunting.  After purchasing at least a dozen 7.5-inch sample squares with adhesive backing so they could be moved around the room, my wife’s friend steered her towards one of the choices.

While I have traditionally done the interior painting in our house, my wife in recent years has hired it out in order to get it done more quickly (Being a perfectionist, I tend to take it slowly).  So, of late, my interior painting has been done at my son’s house who lives in town, which saved them the labor cost of professional painters. 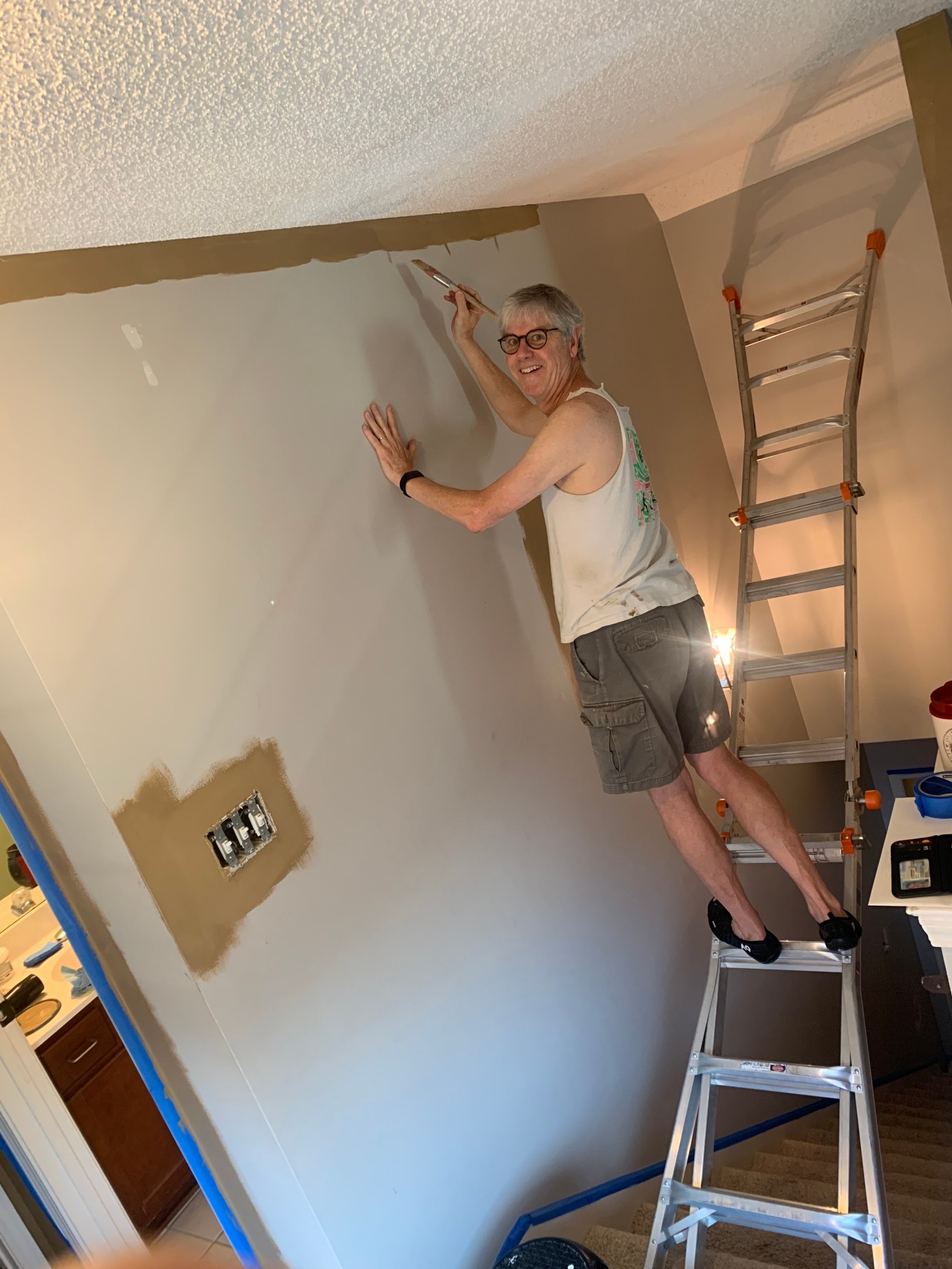 But this time, my wife did not object when I said I would do the painting and so after purchasing the paint, I removed the furniture from the room. 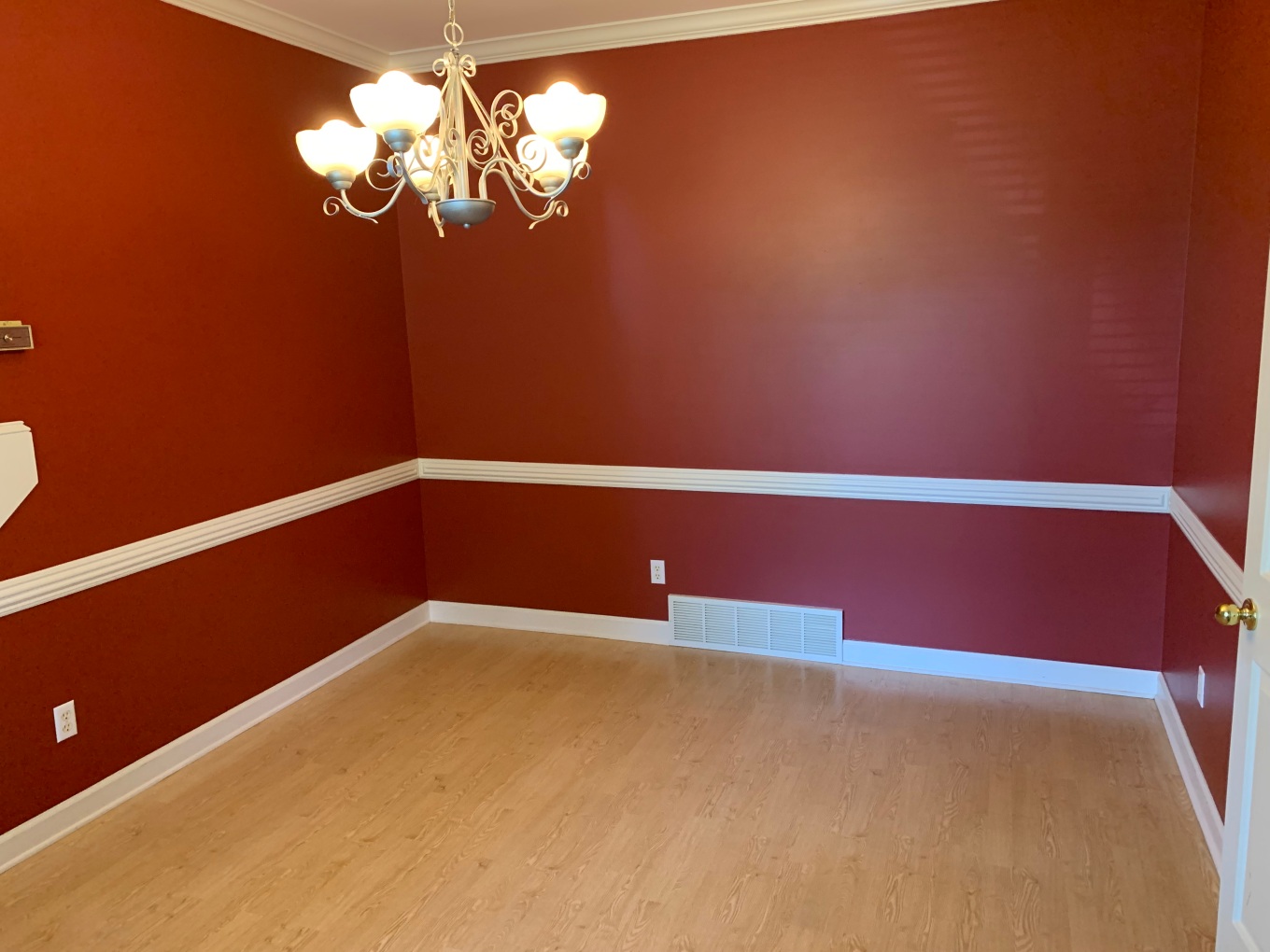 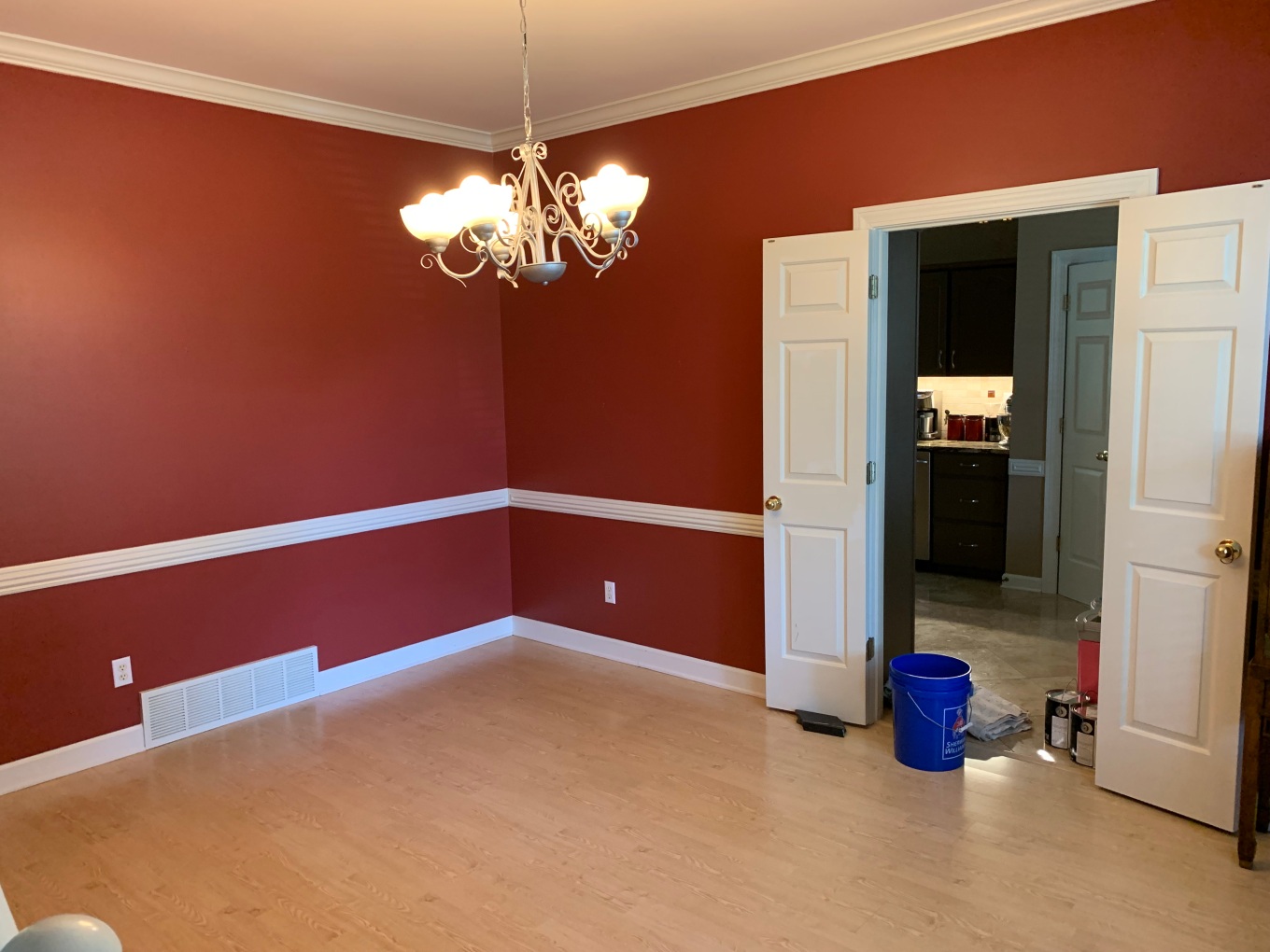 That accomplished, I next taped off the doors, windows and chair rails before applying two coats of paint with a brush. 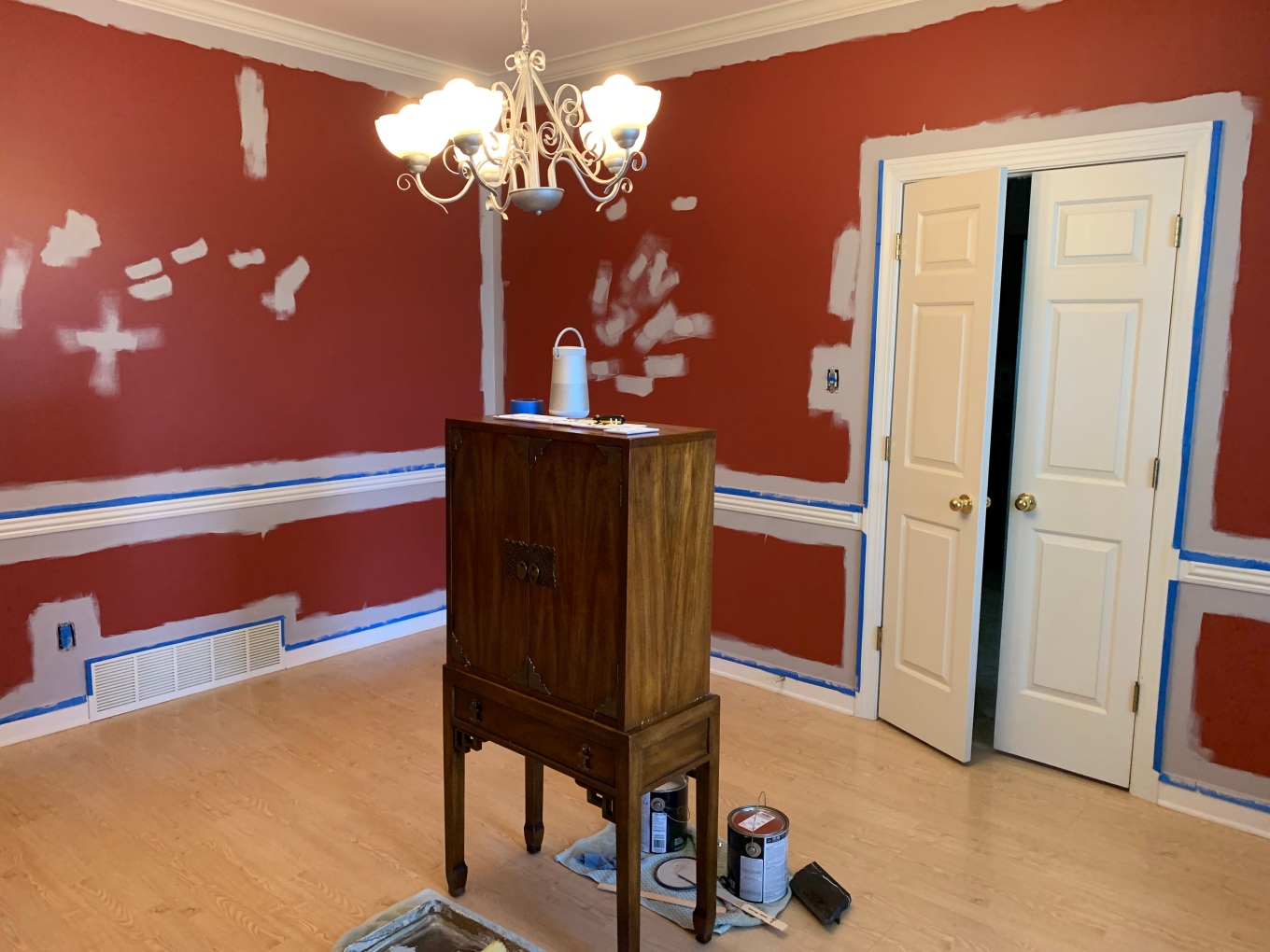 When deciding how to redo the room, my wife suggested I take down the chair rail, but I convinced her not to, given the fact that its removal would have significantly increase the timeline and my repairing of the sheet rock would never have looked professional.  So, while leaving up the chair rails nearly doubled my taping and brush work, it still was a much faster option.  My above before-photos were taken about 9:30 in the morning and by 3:30, I was done with the brush work.

I started to stop for the day but knowing the roller work goes much faster, decided to forge ahead. Ninety minutes later, I had applied two coats. 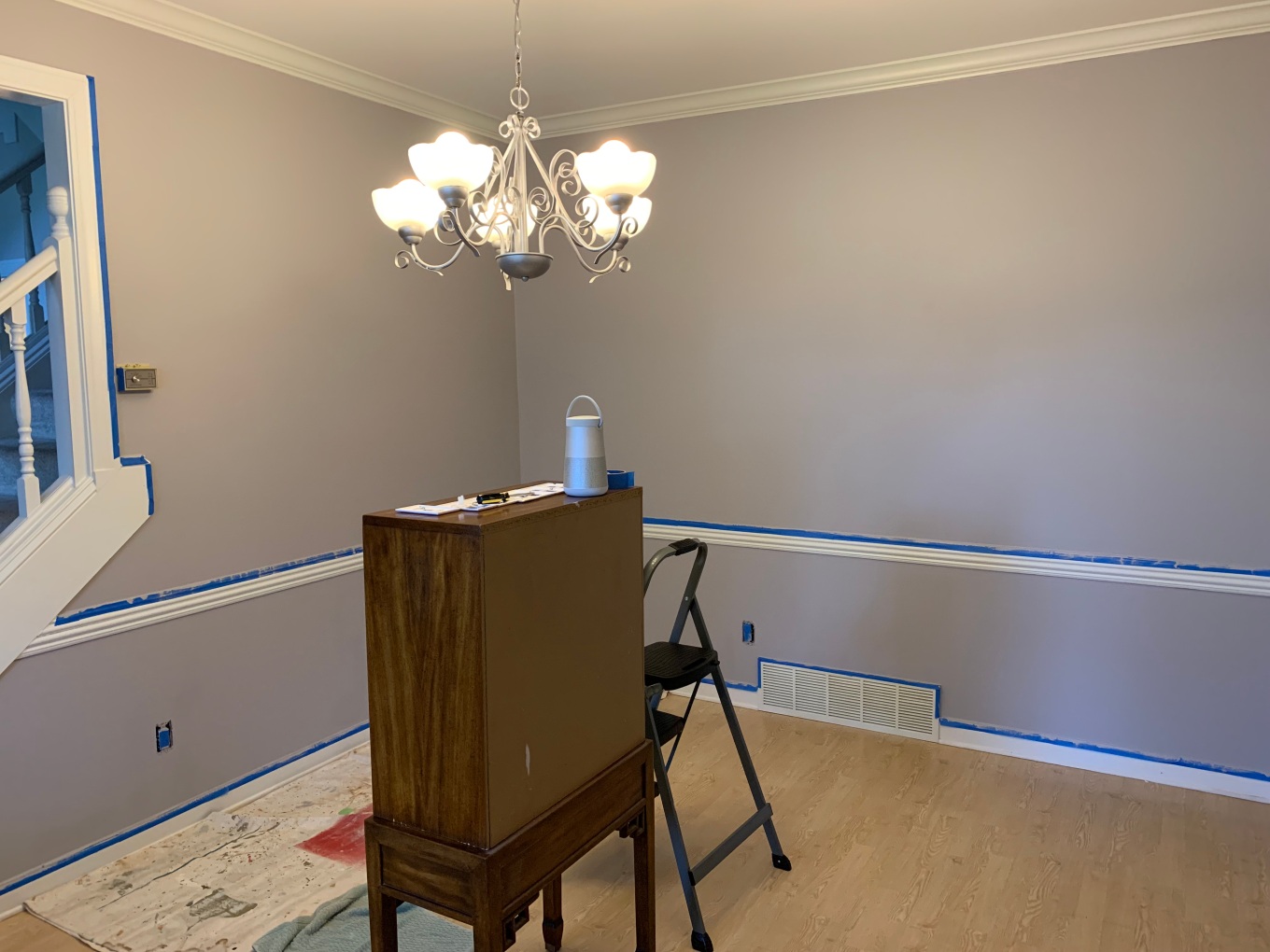 I typically let the paint fully dry overnight before removing the tape, so the new paint does not peel off with the tape.  The next day as I carefully pulled off the tape, I discovered a number of places where I had accidently taped over some of the previous red paint.  This is the downside of not painting the trim first but since the room was rarely used, it did not need to be repainted.

My remedy for this is to go around painting with a small model brush to cover the red and using a damp shop towel to wipe the excess paint off the white trim.  My wife had been off at work all day and so when she came home and saw the finished room, she was most pleased. 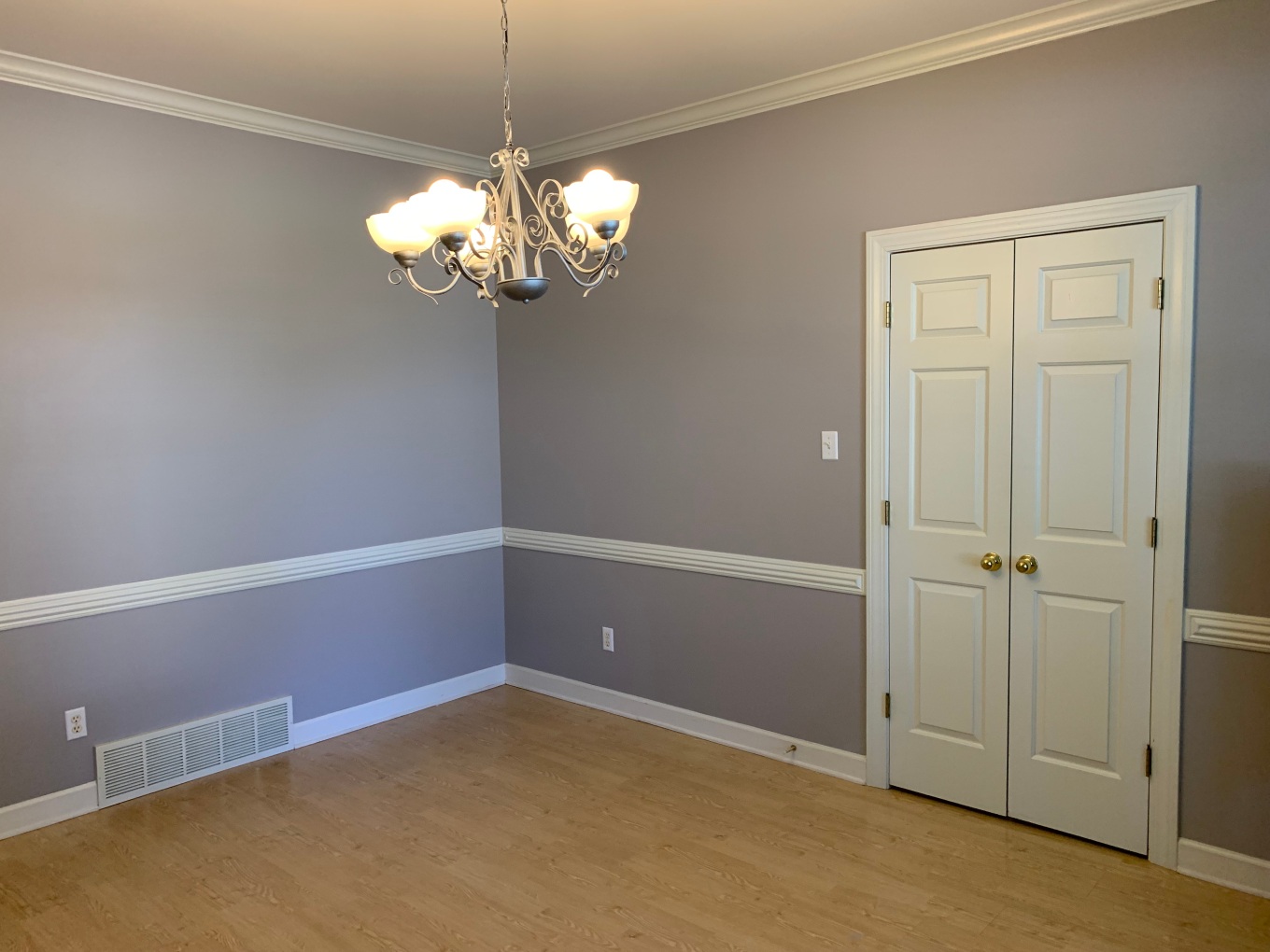 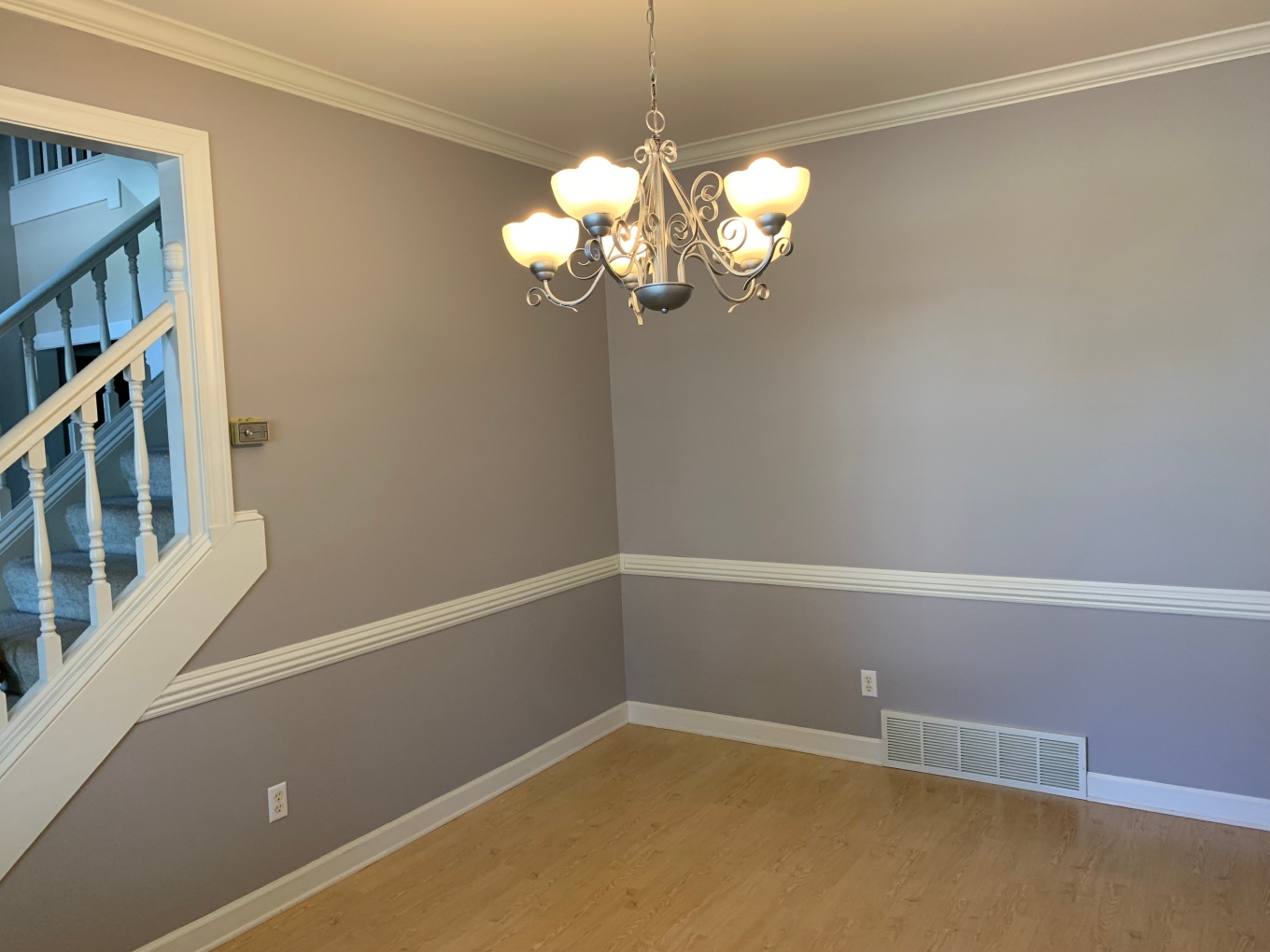 With the painting complete, I could now roll out the new rug and place the new chairs my wife had purchased.

She also purchased an ottoman, a new end table, and a new painting for the wall, retaining the tea cart that had previously been her mother’s.

The most challenging addition—challenging to me that is— was the new overhead light fixture my wife purchased online to replace the dining room-style light fixture that came with the house (that silver monstrosity seen in the photos above).

The Moroccan-style fixture had been hand made by someone and the canopy it came with was so small, it did not cover the poor job the builder did to cut into the ceiling board for the junction box.  I explored replacing it with a larger canopy and even purchased one online but due to the unique nature in how the fixture had to be hung, none of the replacement canopies I saw would work.  So, in the end, I did a repair job around the junction box to be able to use the canopy that came with the fixture.

With that done, the fixture added a unique ambiance to the room…

…that was the most impressive at night when the light pattern made by the multitude of tiny holes was most visible. 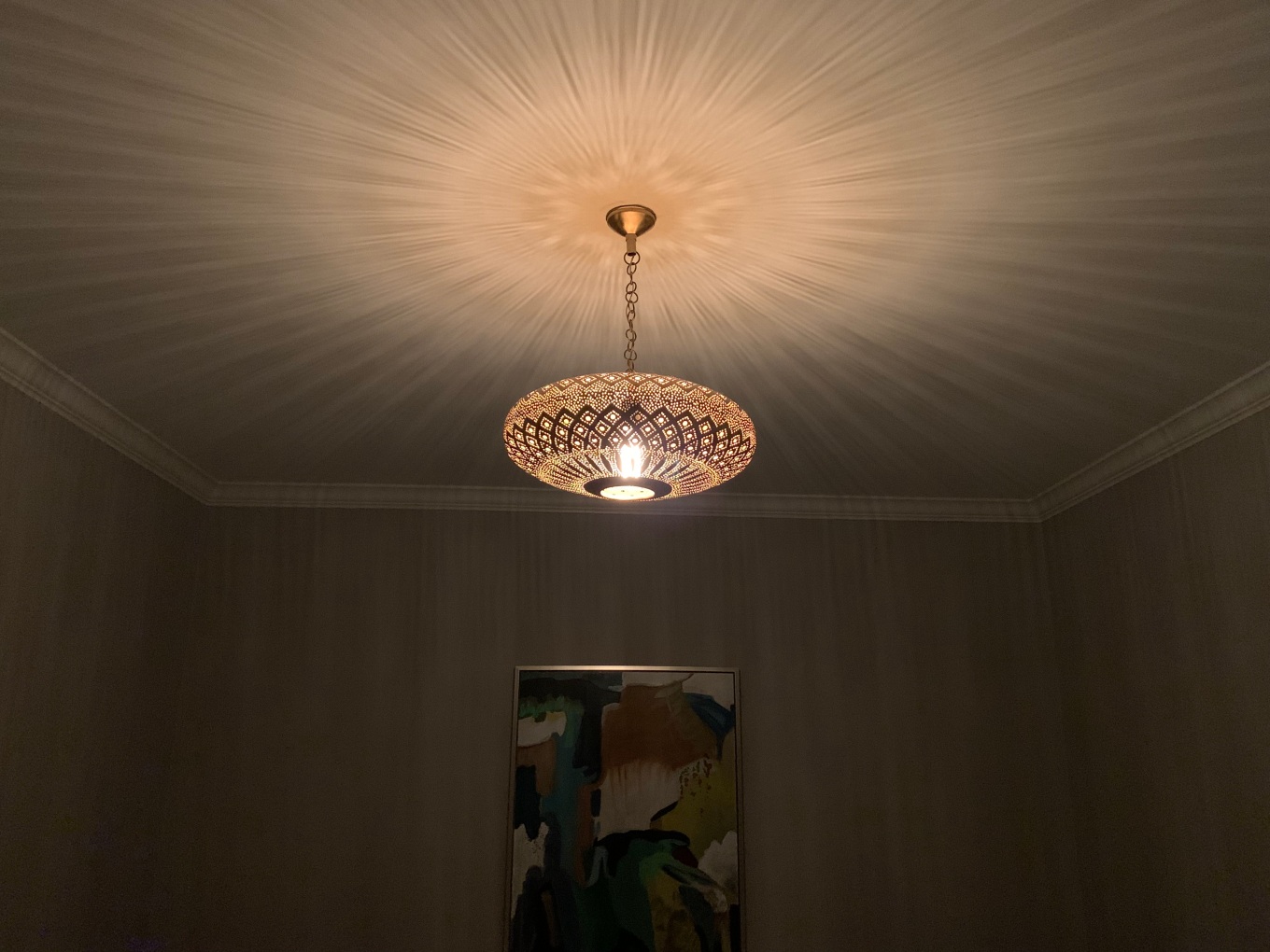 Since the new fixture only uses a single bulb, the room is obviously much darker at night and so to remedy that, my wife still plans on purchasing a floor lamp, but probably one to remain with the style of the new room.

As yet, my wife has still not named her new room, but I know she will come up with one as interesting as the name she came up with for our sunroom, the “snug”, a room that was previously decorated.  Then she will be able to really enjoy her new room.