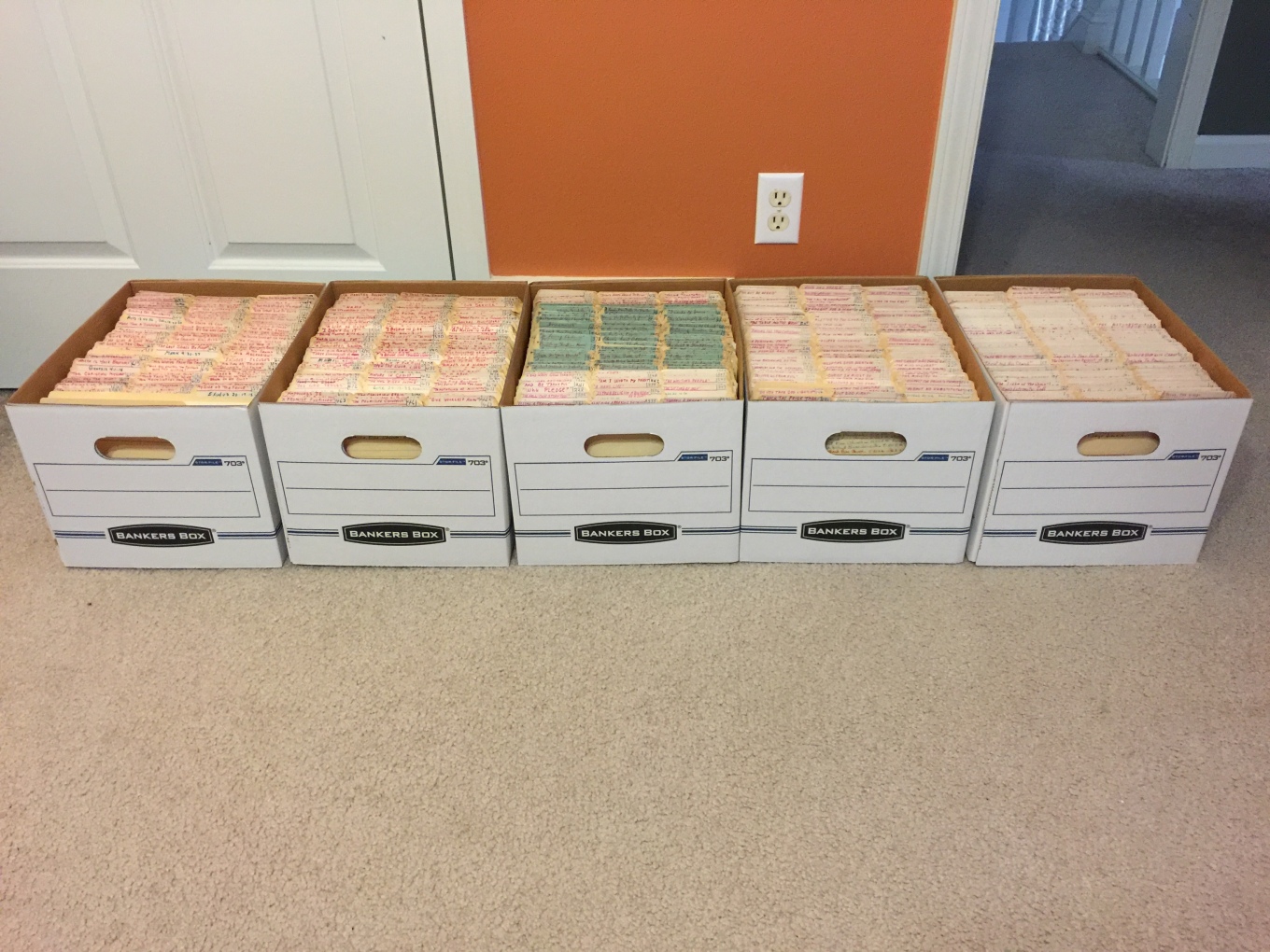 I have written several times about these boxes of my dad’s sermons that my oldest sister thankfully saved after his death in 2002, the first of which was when my sister and I discovered them in an old file cabinet in storage. 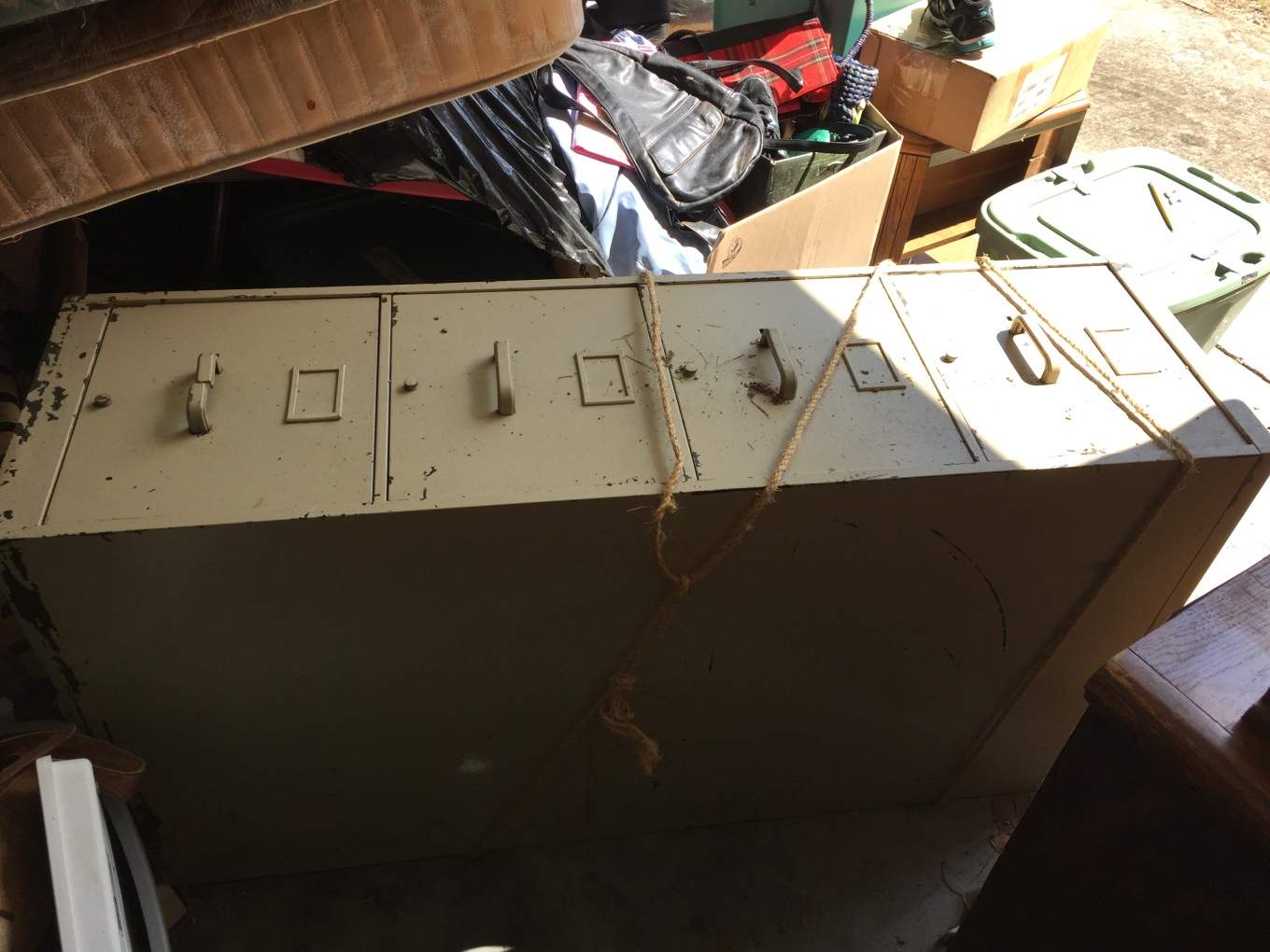 Since that time, I have been on a multi-year mission to read each and every one of the 700+ sermons he wrote.  Typically, I read one every Sunday morning, sometimes faintly hearing my dad’s long-lost voice speak to me through his written words.  I am currently up to 433, a little over halfway. 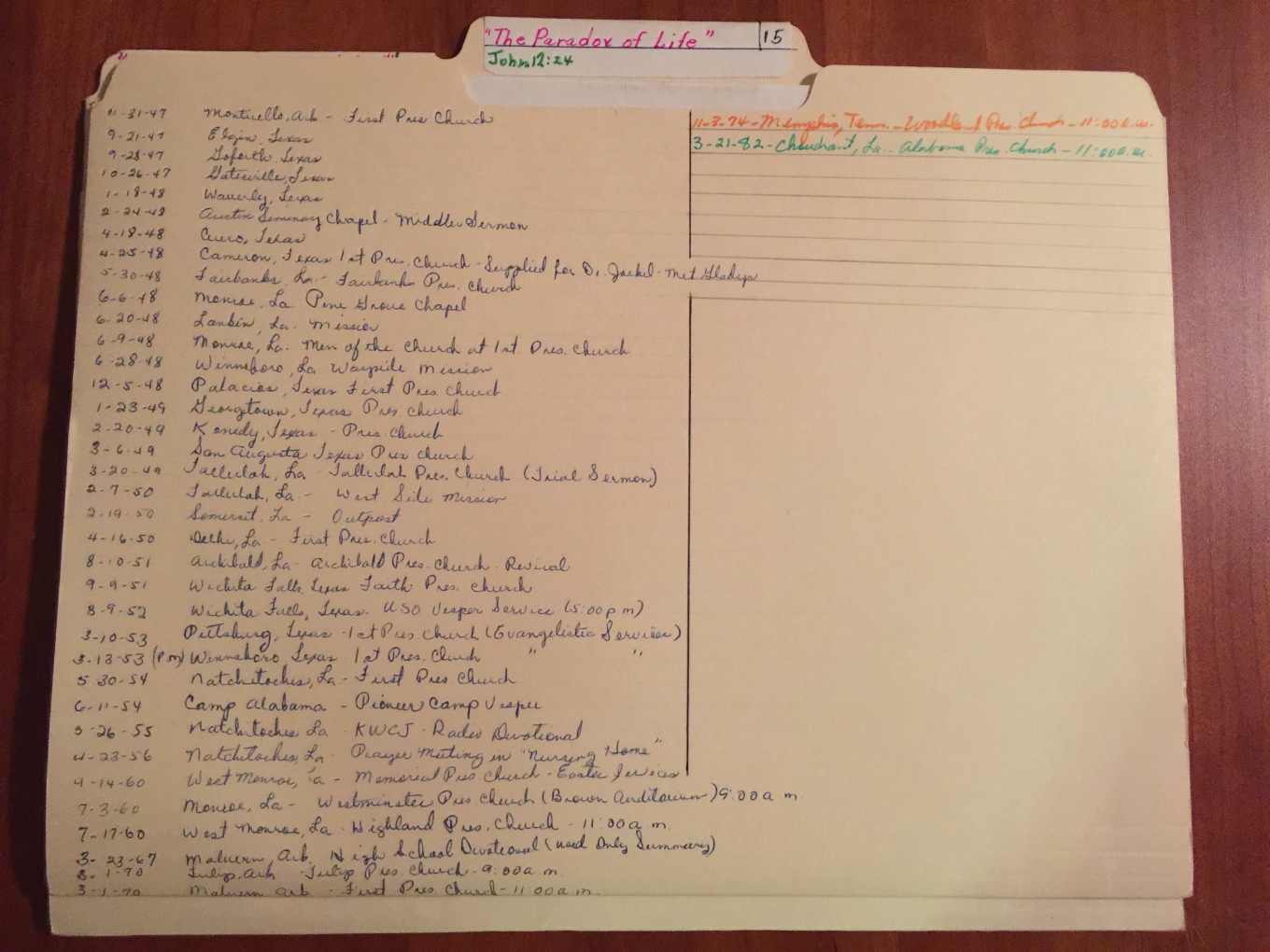 If you have not read my posts about these sermons previously, they date back as far as 1949 when my dad first became a Presbyterian minister.  On the outside of each folder, my dad meticulously chronicled each time the sermon was given, preserving as a permanent record the date and church where it was given.  Some sermons he gave numerous times and others, maybe only once or twice.

On a recent SibSab trip over to Northwest Arkansas where my two sisters live, they each gave me some additional items of our dad’s that they had been preserving since his death nearly 20 years ago. 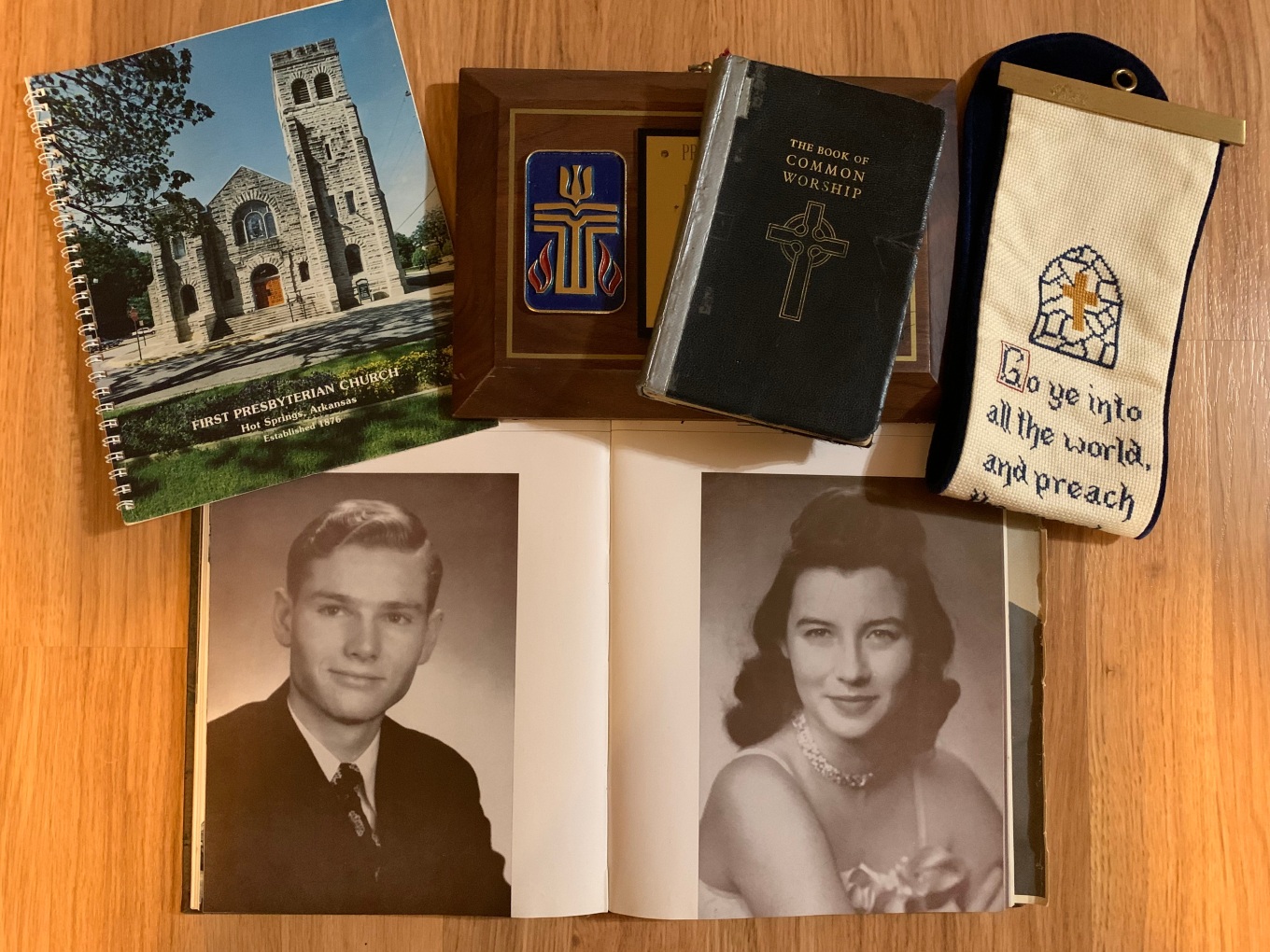 There were annuals from the mid-1940s when our dad was at seminary, pictorial directories from some of his churches, awards from his 40-year ministry, his doctoral thesis, and even an unpublished manuscript, a guide for young ministers, he was working on at the time of his death.  But when my sister handed me this mended, bound book, my hands began to shake, and chills ran up my spine. 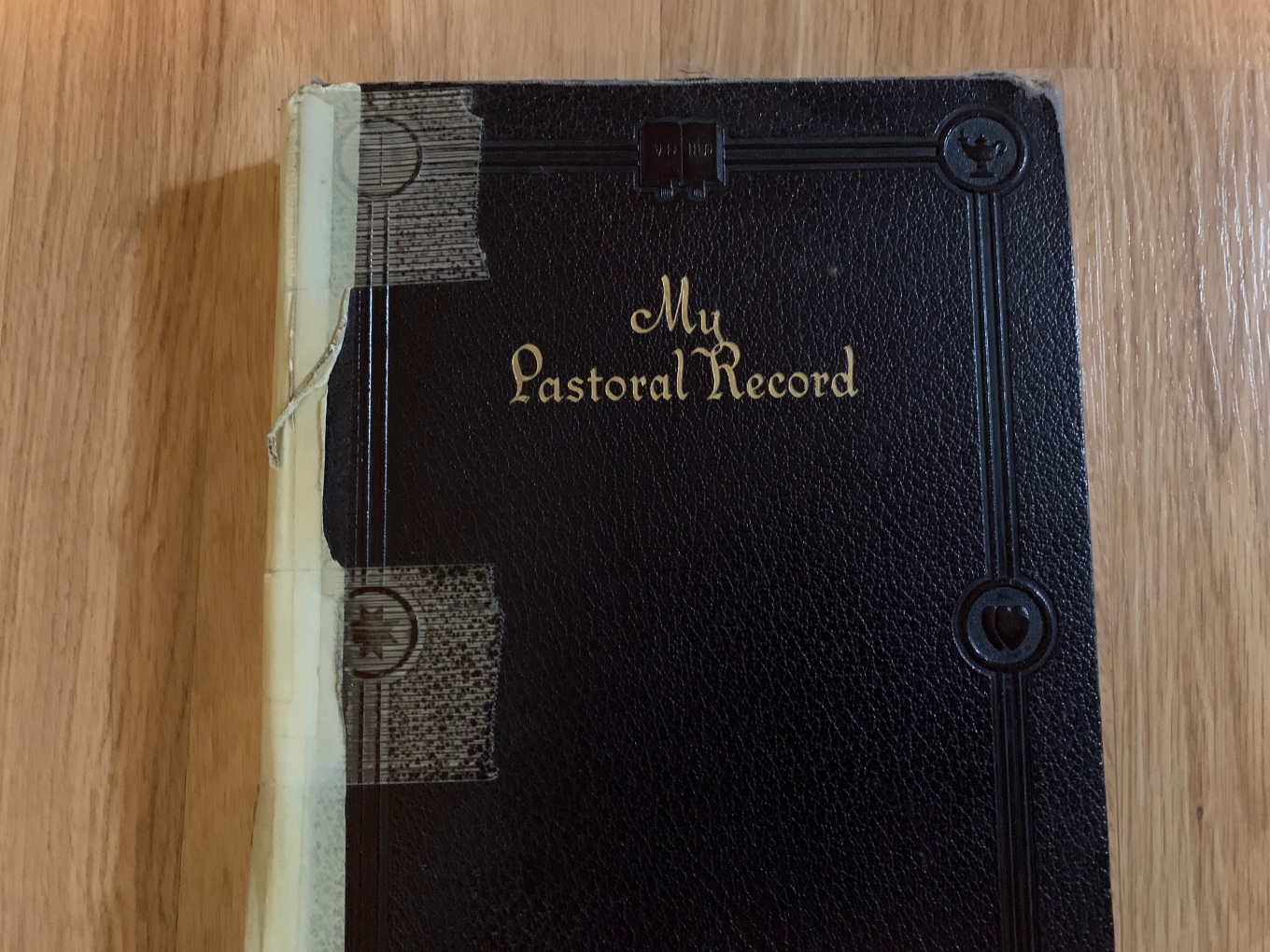 Not knowing this book existed or even what it was, I flipped to the first page and below a repeat of the title “MY PASTORAL RECORD” my dad had very neatly signed his name on the line below the subtitle: “THE LIFE MINISTRY OF.”  As I carefully turned a few more of these 70-year-old pages, it suddenly hit me that I was holding a roadmap to my dad’s entire ministry career, carefully scripted in his own handwriting. 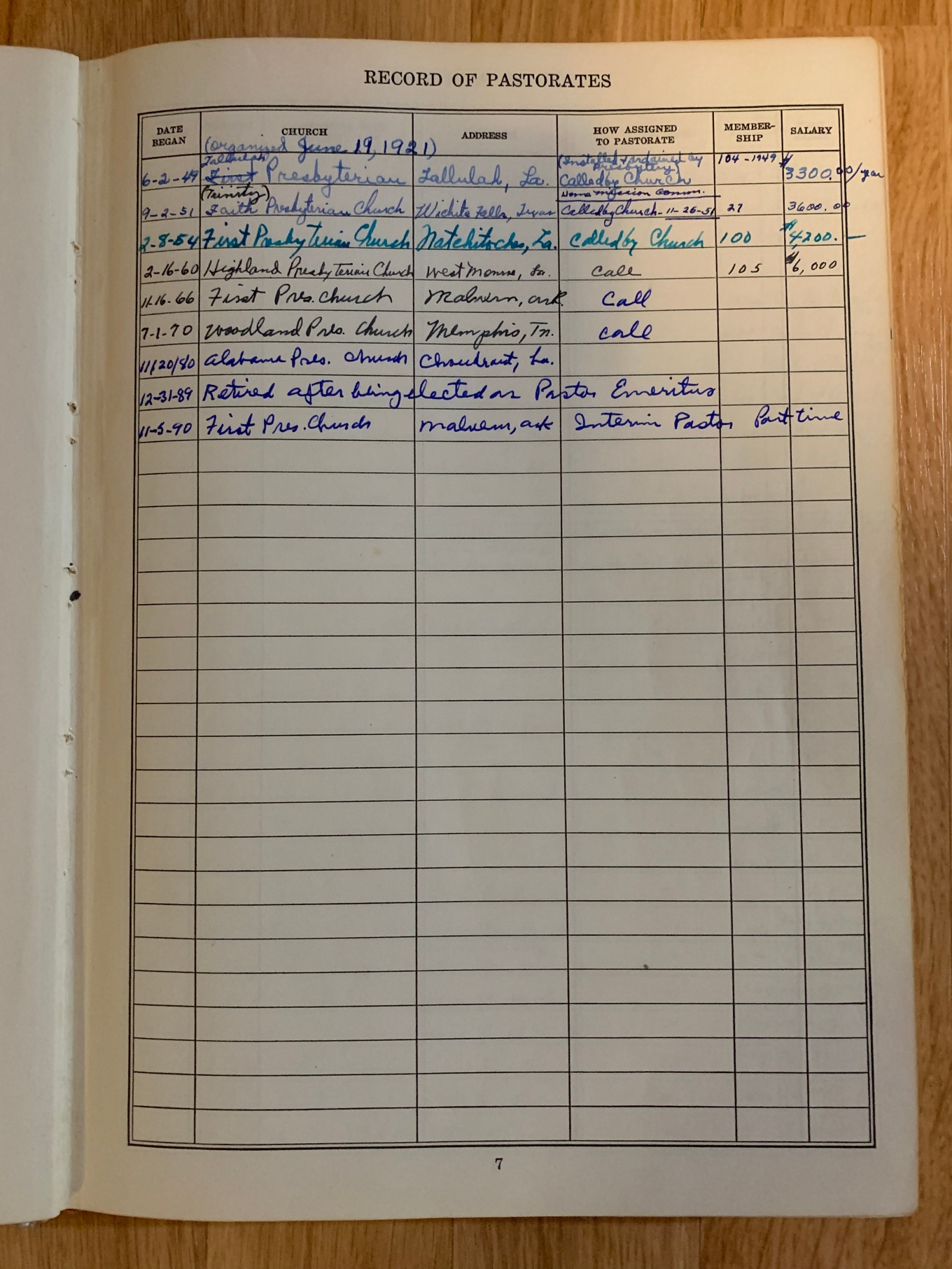 His first recording was from June 1949 on a page entitled “RECORD OF PASTORATES” when he was installed at his first church.  Below that were the other six churches he served at before retiring.  Following that single page was a multi-page “RECORD OF BAPTISMS” duly noting his first in October of 1949 and capturing each of the over 300 baptisms he performed including those after he retired while serving as fill-in pastor.  Knowing what years, our own baptisms should appear, I quickly found all four of ours.

Now realizing the sections of the book were presented in chronological order of the events that would occur in the lifetime of a church member, next was a listing of all the members he had received into the church and then all of the marriages he had performed.  My siblings and my own weddings were easy to spot among the over one hundred recorded as he had an asterisk next to ours.

Closing the life cycle of a church member, the next section I came across was a “RECORD OF FUNERALS” he performed, sadly with special notations upon the burial of his own parents and leading up to his last funeral, less that three months before his own.

Feeling rather saddened over this section, I then came across a “RECORD OF SERMONS DELIVERED.”  My hands began to shake again as I turned the pages, and my previous sad emotions were replaced with tears of joy.  I could not believe what I was holding! 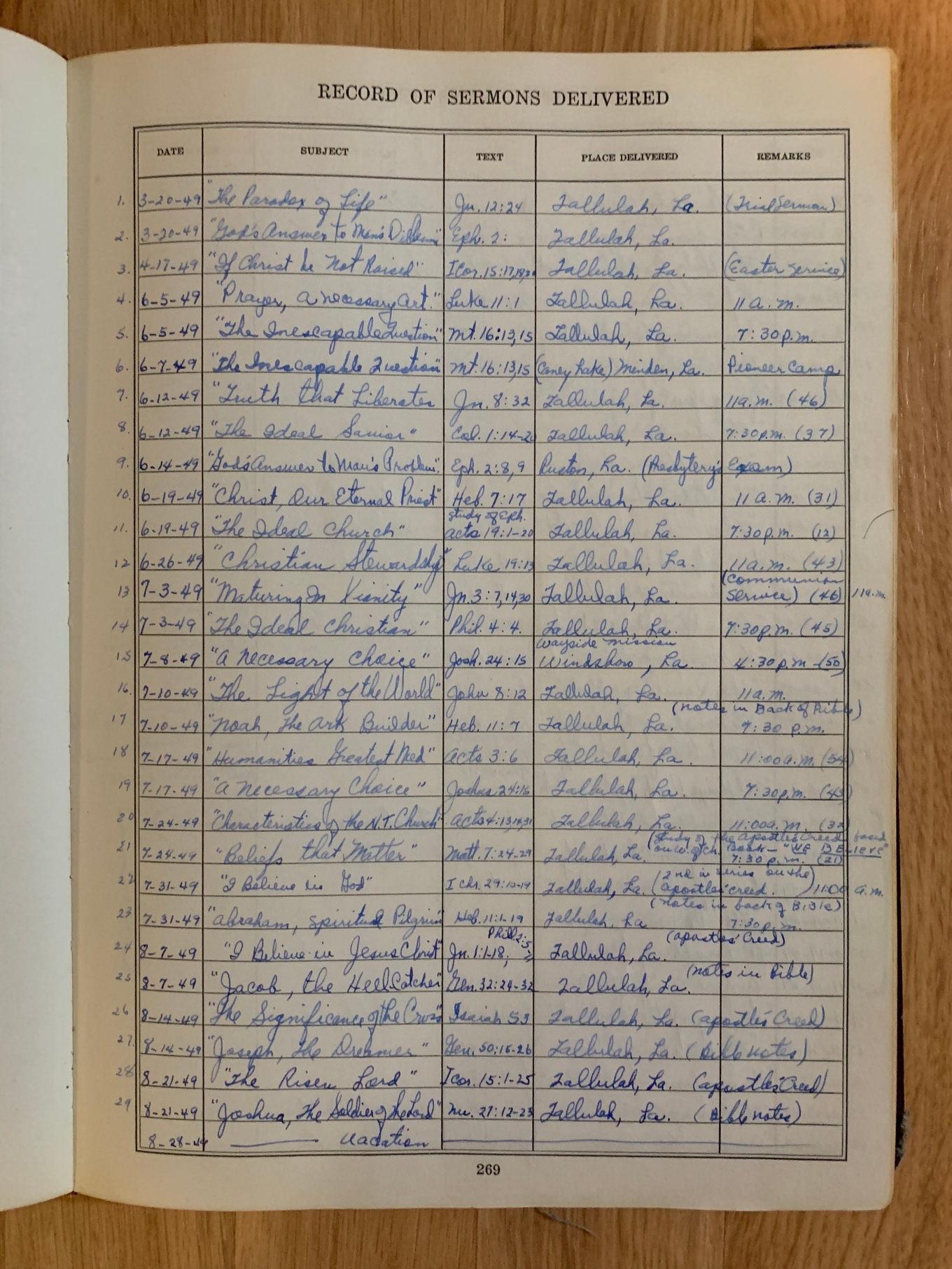 With my dad’s meticulous attention to detail, he recorded each and every sermon he ever gave.  To the far left, he recoded the sequential number of the sermon written and delivered and then when he began to repeat some of his sermons at the different pastorates he served over the years, he would record to the far right the number of that sermon given. 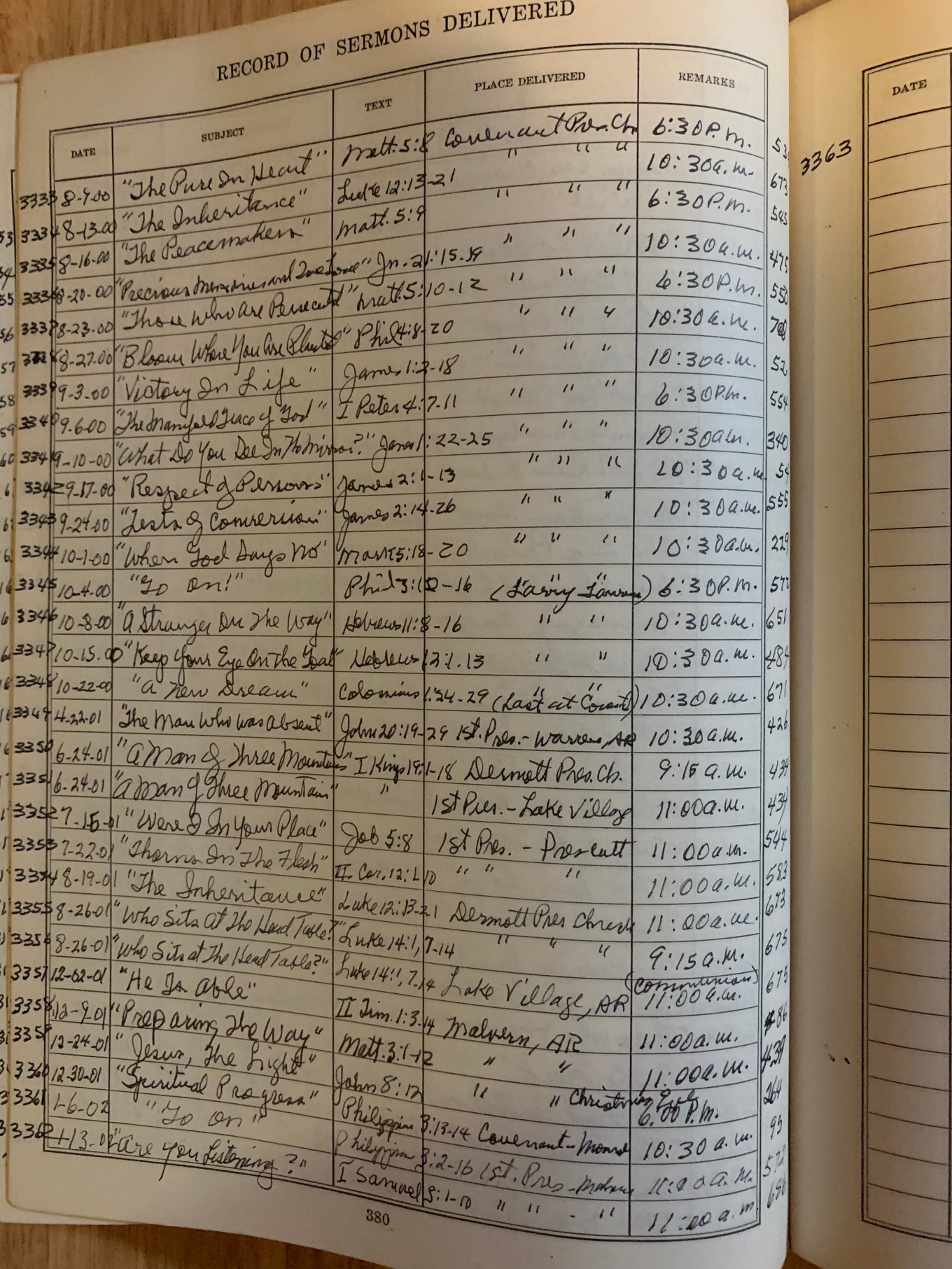 I hurriedly flipped over to the last page and was surprised to discover that my dad had given 3,362 sermons in his lifetime, the last less than two months before his death.  At the top of the next page, he had already written in number 3,363, only never to be delivered.

Doing the math quickly in my head, I was thinking over a 40-year career and assuming 50 Sundays per year (with a two-week vacation), he should have recorded about 2,000.  But then I realized that at two of his churches, he often gave an early Sunday service at an outlying rural church and for six of the years, one of his churches had an 11:00 am service and a 7:00 pm service.  Add to that the weeklong special services he would occasionally give where services occurred five nights during the week, it was easy to see how the number had grown dramatically from that quick calculation to the reality of the final tally. 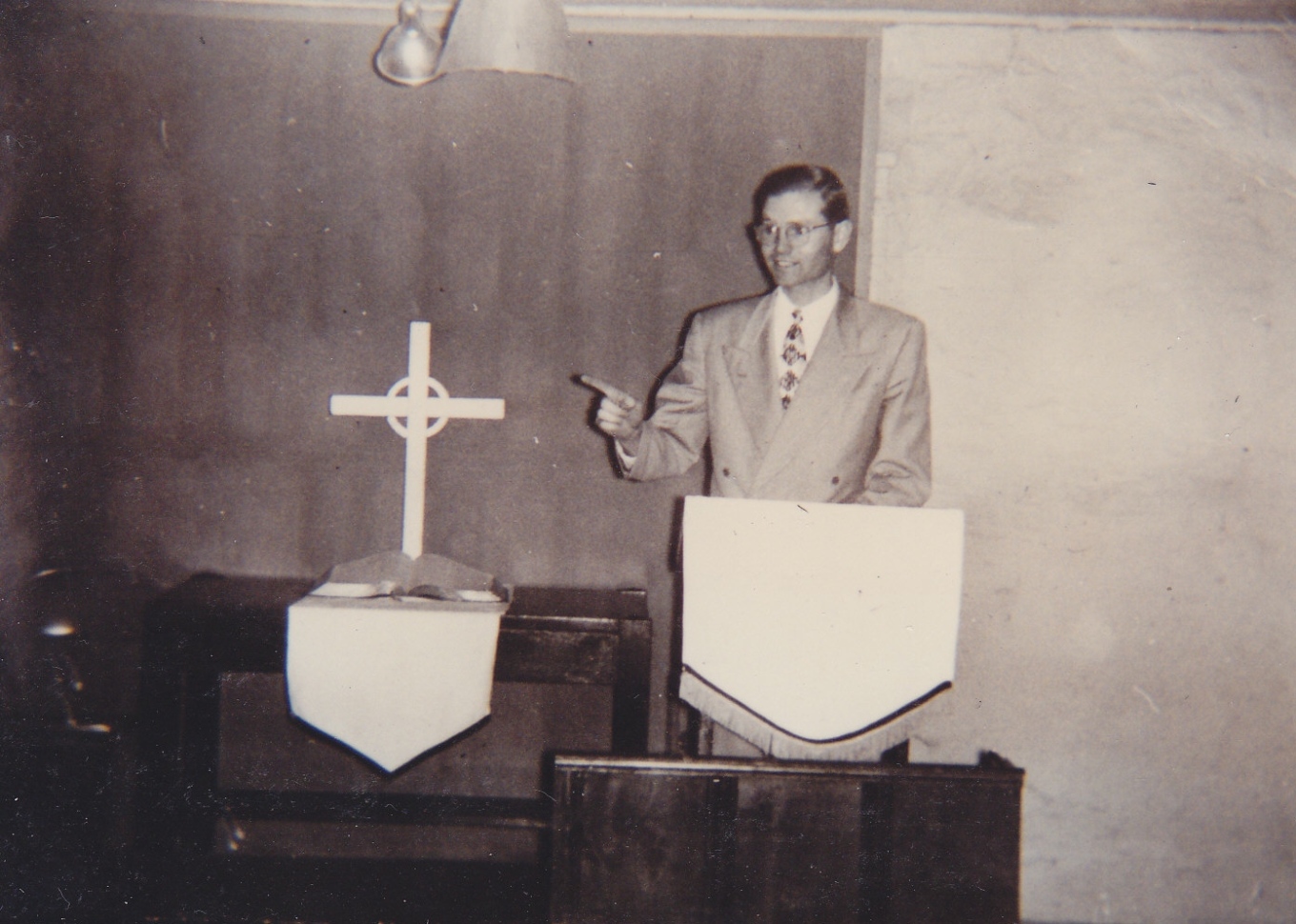 Thinking Dad was duteous in recording the date of each sermon on the folders he created for each one, I had no idea until that moment that he was in fact doing double entry bookkeeping.  Then it dawned on me with the book still quivering somewhat in my hands that I finally had the key to answer two burning questions that had been lingering in my mind ever since I began this journey to read all of his sermons: how many total sermons did he write and what was the last sermon he ever gave?

Turns out, learning the last sermon he gave was the easiest question to answer as with this book, I could now simply flip to the last recorded page to sermon number 3,362 and see it was one entitled “Are You Listening?”

With that question easily answered, I realized determining how many sermons he actually wrote would require a bit more investigative work once I got home since a quick scan of the numbered sermons did not tally up with the total I thought he had written. 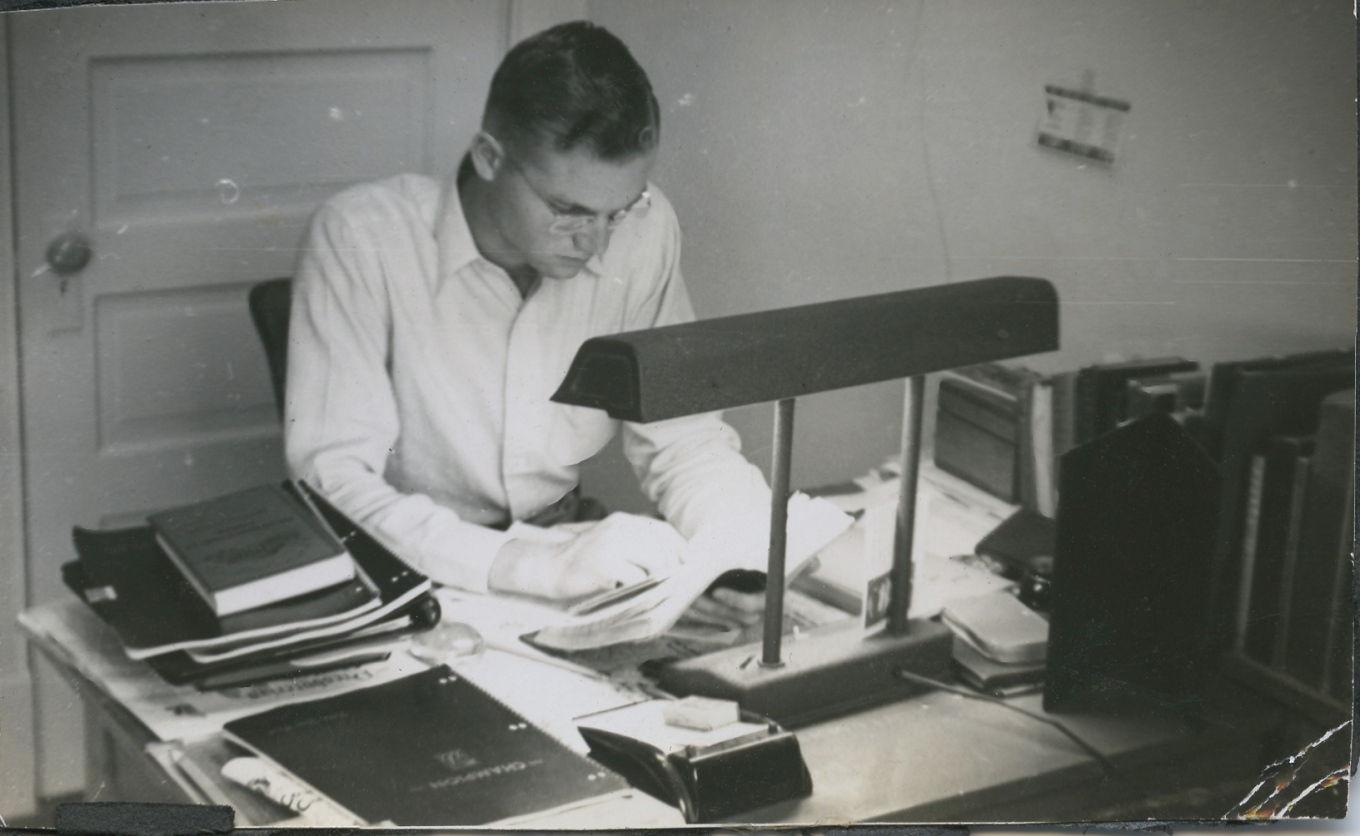 Thunderstruck by the knowledge of what I was holding, I finally flipped to the end of the book to find the 72-year-old certificate of his ordination at his first church, one more treasure in this treasure trove.

Closing the book, I now fully comprehended that I truly had a roadmap of his entire career, even extending beyond his 1989 retirement and up to within weeks of his untimely death in 2002.  While it only represents a synopsis of milestones along his lengthy dedicated ministry, it is a treasure none the less.  So, to my oldest sister he saved his sermons all those years ago and passed them to me and to my other sister who handed me this incredible book just weeks ago, I say “Thank You!”  You’ve both given me the greatest present conceivable, the legacy of our dad and the pastoral life he led!

7 thoughts on “Roadmap to a Lifelong Career” Leave a comment ›