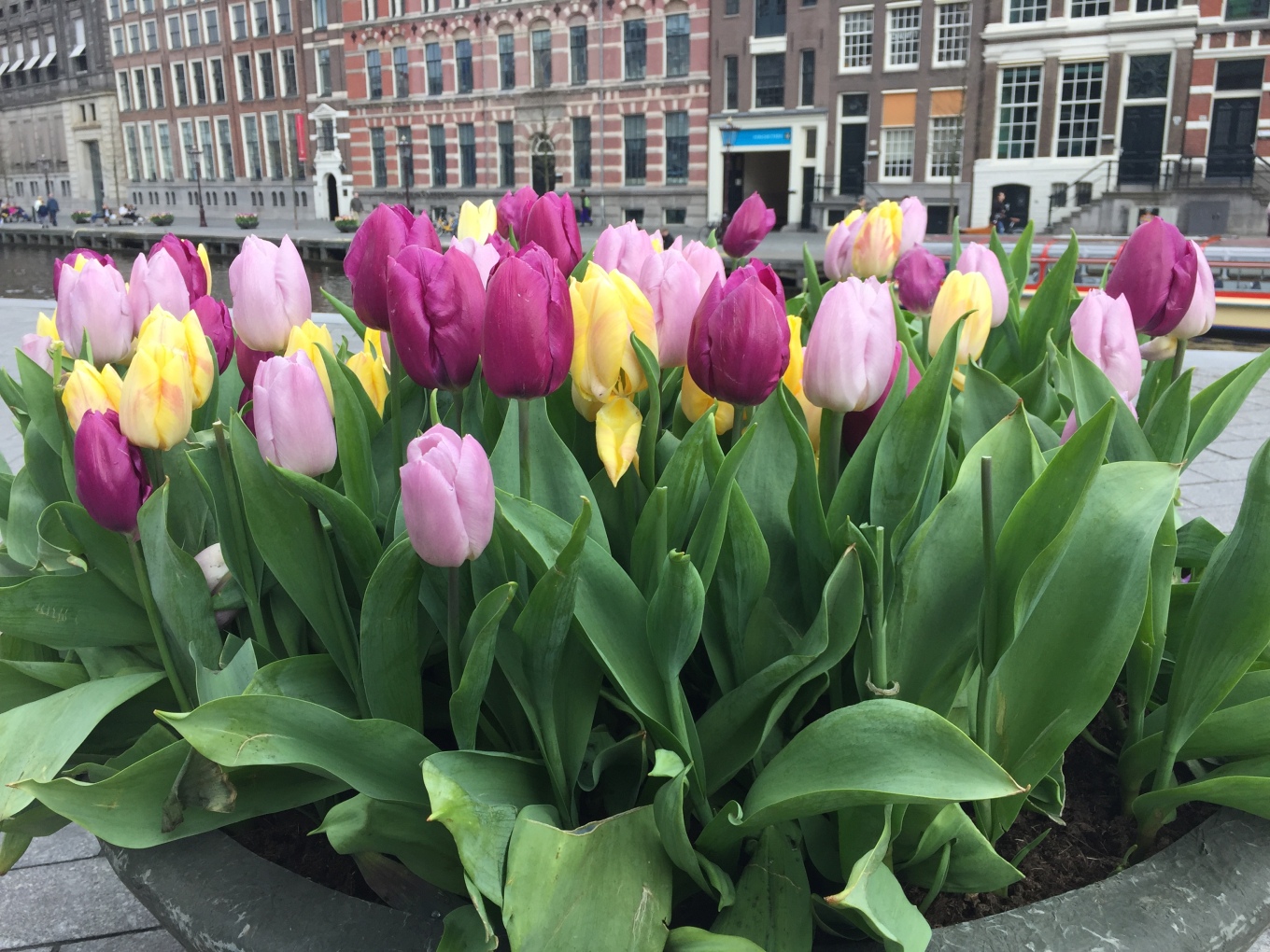 Last year, I wrote about how 2020 was the first year in almost a quarter century that I had not gotten to travel to Amsterdam (Amsterdam Lost) to teach my Method Validation course.  Up until then, I had made an annual pilgrimage, typically in the spring, to teach and to explore this city that I love so much.  And one of the activities I enjoy each trip and the main reason we schedule our course in the spring, is to get to see so many tulips in bloom, particularly at Keukenhof, the 200-hectare park which boasts the blooming of 7,000,000 bulbs over its short two-month opening. 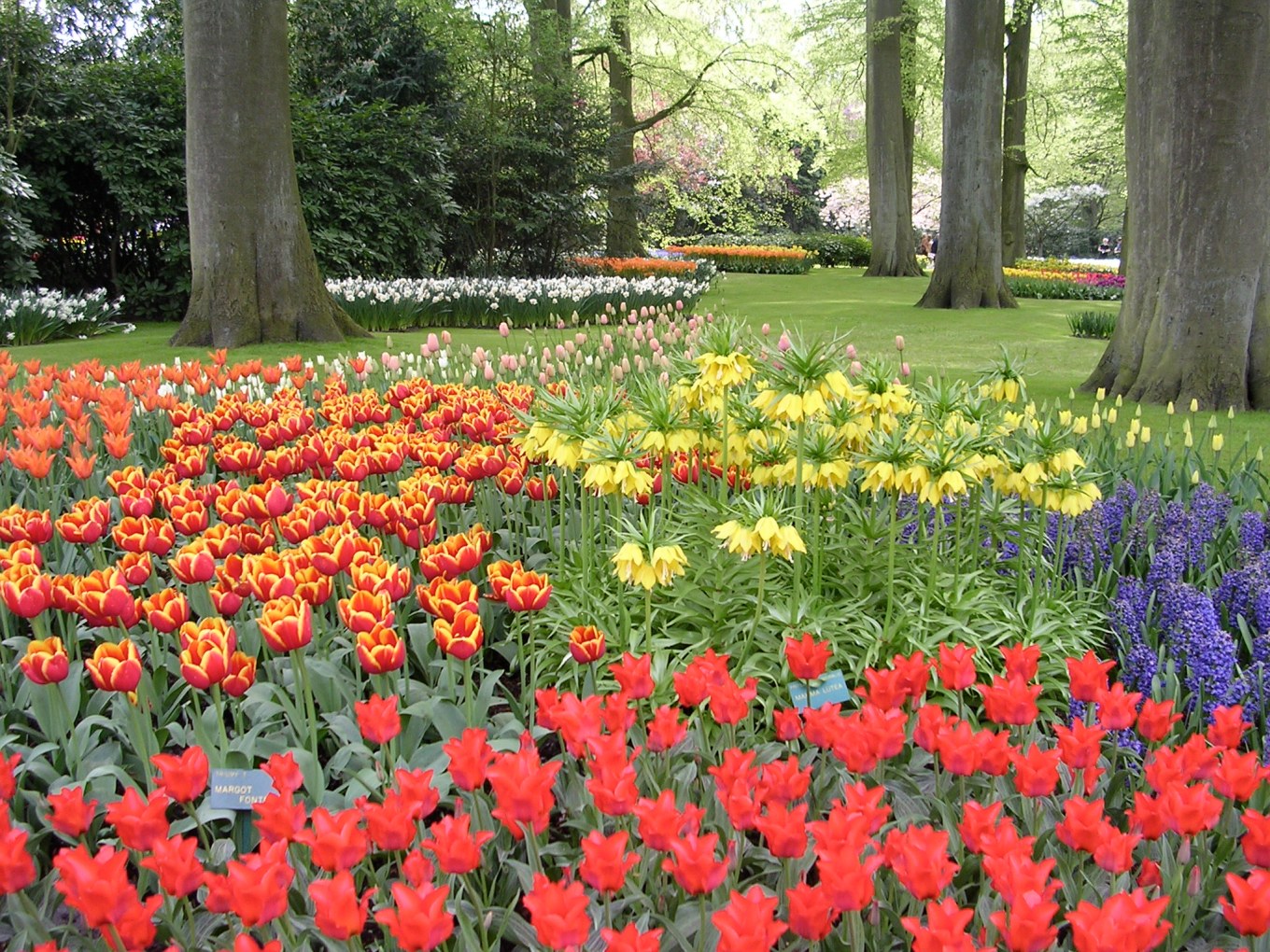 Well even before we rang in the new year of 2021, a year of promise and hope of returning to some sense of normalcy, I knew I would be missing my annual trip again.

Prior to 2020, my teaching year usually started in March teaching in New Jersey and then in either April or May, we would teach in Amsterdam.  But given that by year end, we were only beginning to roll out vaccines that could hopefully end the pandemic, the organization I teach for had made the decision that at least through the first half of the year, all courses would be virtual.  So, no Amsterdam trip for the second year in a row.

Prior to beginning my travels to Amsterdam, I cannot say that I considered myself a lover of flowers. But after just a few trips, the tulip became my favorite flower with an amaryllis running a close second.  So, in this time of no travel, I reverted to my love of these flowers to get a little taste of Amsterdam. 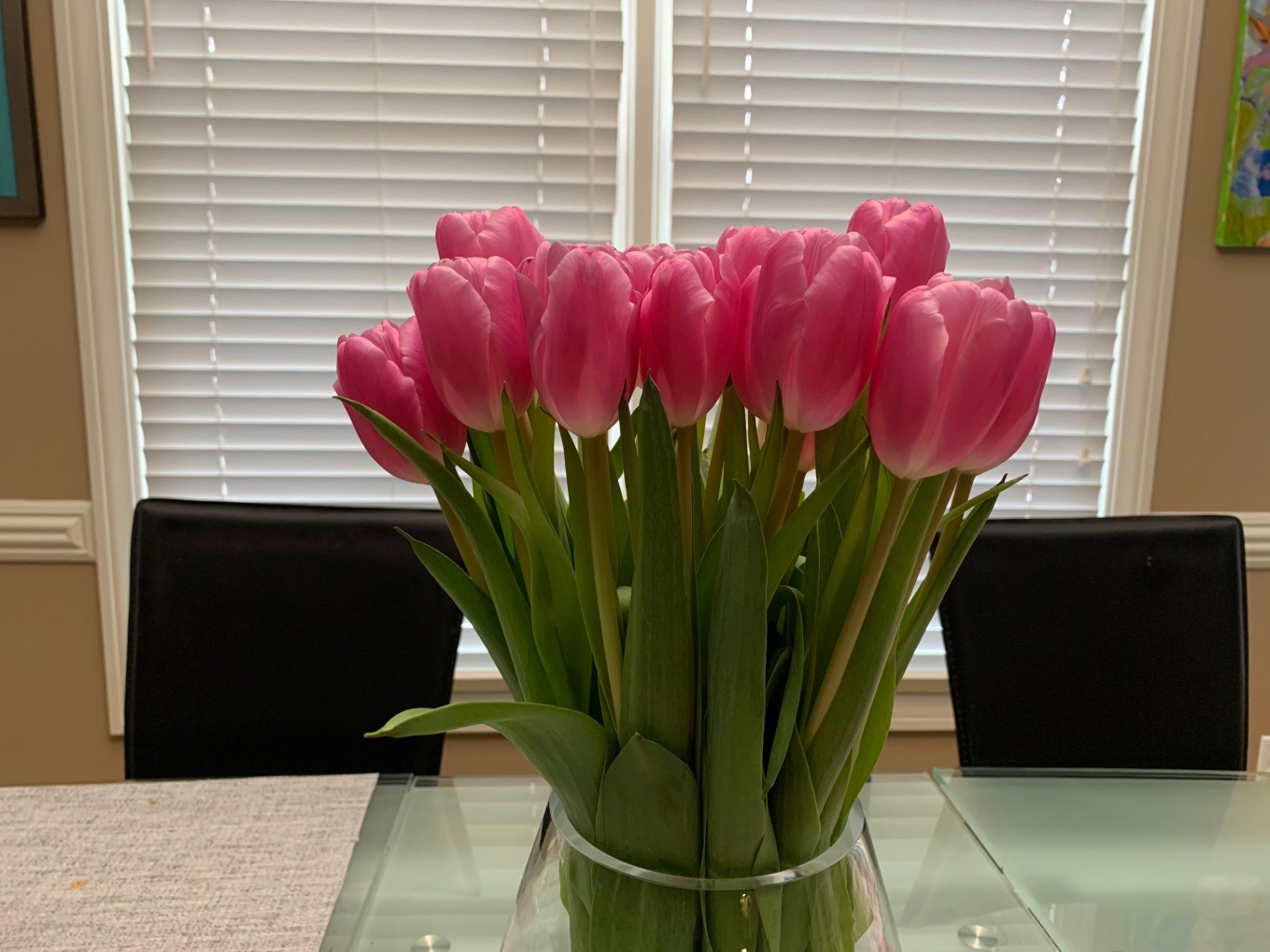 It all started when I went to buy a bouquet of flowers for my wife for Valentine’s Day.  As soon as I walked in the door, the tulips caught my eye.  While I knew they were really my favorite flower, I thought my wife would enjoy them as well.  And the day after when the first of three snowstorms hit Memphis, I thought a contrast between the spring and winter would make for a nice contrast. 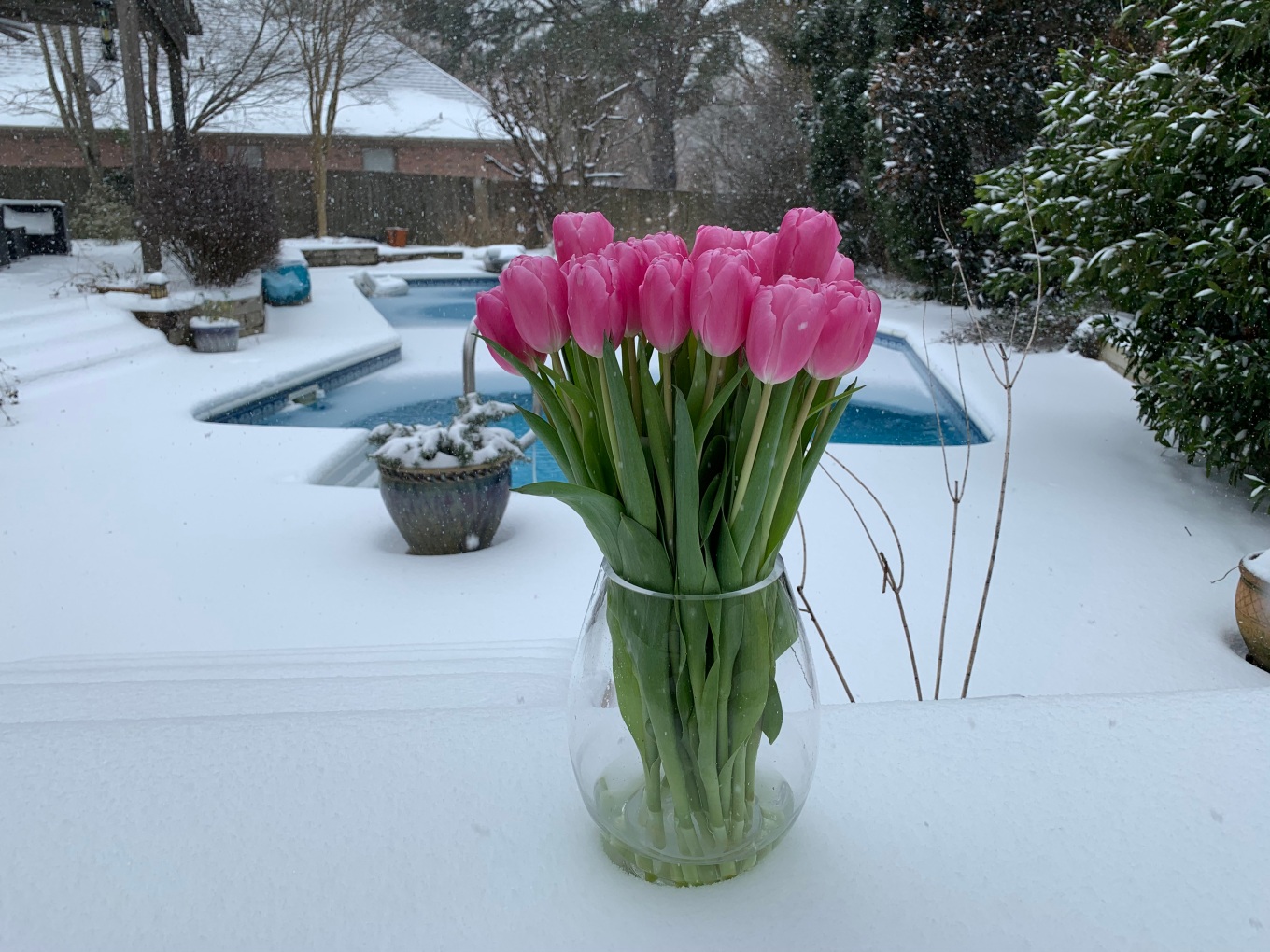 Each night when we sat down at the table to eat dinner, I looked up and saw these beautiful flowers which reminded me of being in Amsterdam.  In fact, I enjoyed it so much that I bought a new bouquet each week, so we always dined with tulips on the table throughout the remainder of winter and into spring.  I continued this practice until the end of April alternating colors each week.  It really helped me miss Amsterdam a little less.

The amaryllis bulbs I had brought home from Amsterdam also helped me ameliorate my sense of loss. 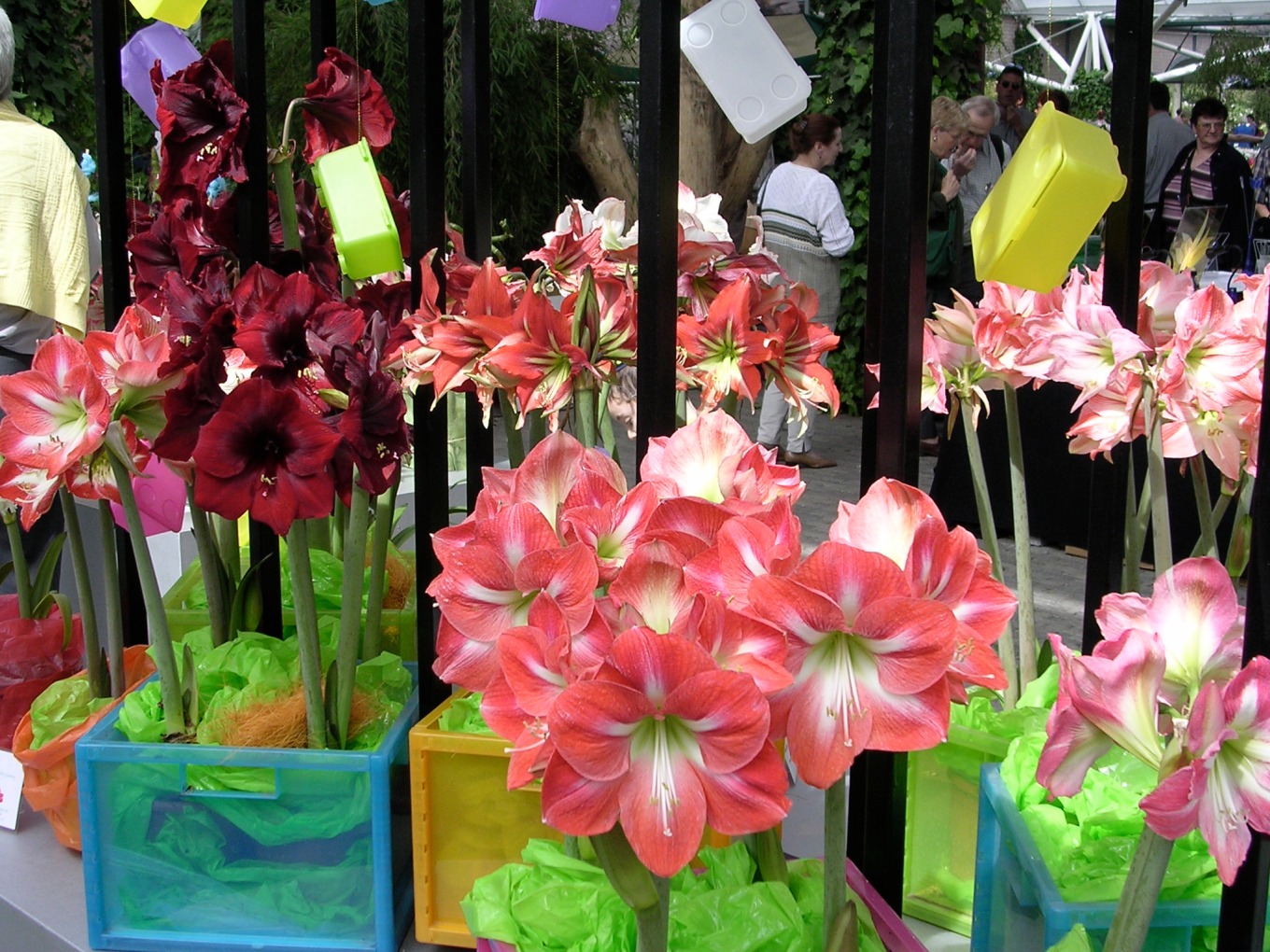 Prior to travelling to Amsterdam, I can’t recall having seen these flowers blooming.  I knew they were fairly common to grow indoors around Christmas and had probably seen them in this fashion.  But when I went to the Flower Market on a canal in Amsterdam, I was amazed at the size of the bulbs being sold.  I easily recognized the ones that were probably the size of a baseball but when I came across a booth that had ones as big as a cantaloupe, I could hardly believe my eyes.  They looked like amaryllis bulbs on steroids!

On more than one occasion, I bought bulbs and brought them home.  Originally, I planted them in pots and grew them indoors but then figured out that with our relatively mild winters, I could transplant them to a flower bed in the backyard and each spring watch them come back to life and bloom beautiful flowers.

Occasionally I would actually miss them blooming as I traveled to Amsterdam the same week.

Then last year, after they had started to grow, we had an unexpected late freeze that killed the flower stalks and the immature blooms.  What a year to have that happen when I couldn’t even travel to Amsterdam?  I decided then and there I would not let this happen again.

So, in the fall after the plants had died back, I dug up all four bulbs and threw them into a bucket in the garage.  There they stayed over the winter.  Then in either late February or early March, I purchased some pots and good soil to replant them.

I read online that a good way to give the bulbs a kick start was to soak them in lukewarm water for several hours before planting them.  I did this and then planted them in the new soil.  I put them outside and then within just a few days, leaves began to grow on each bulb and within two weeks, three of the four bulbs had already put up flower stalks. 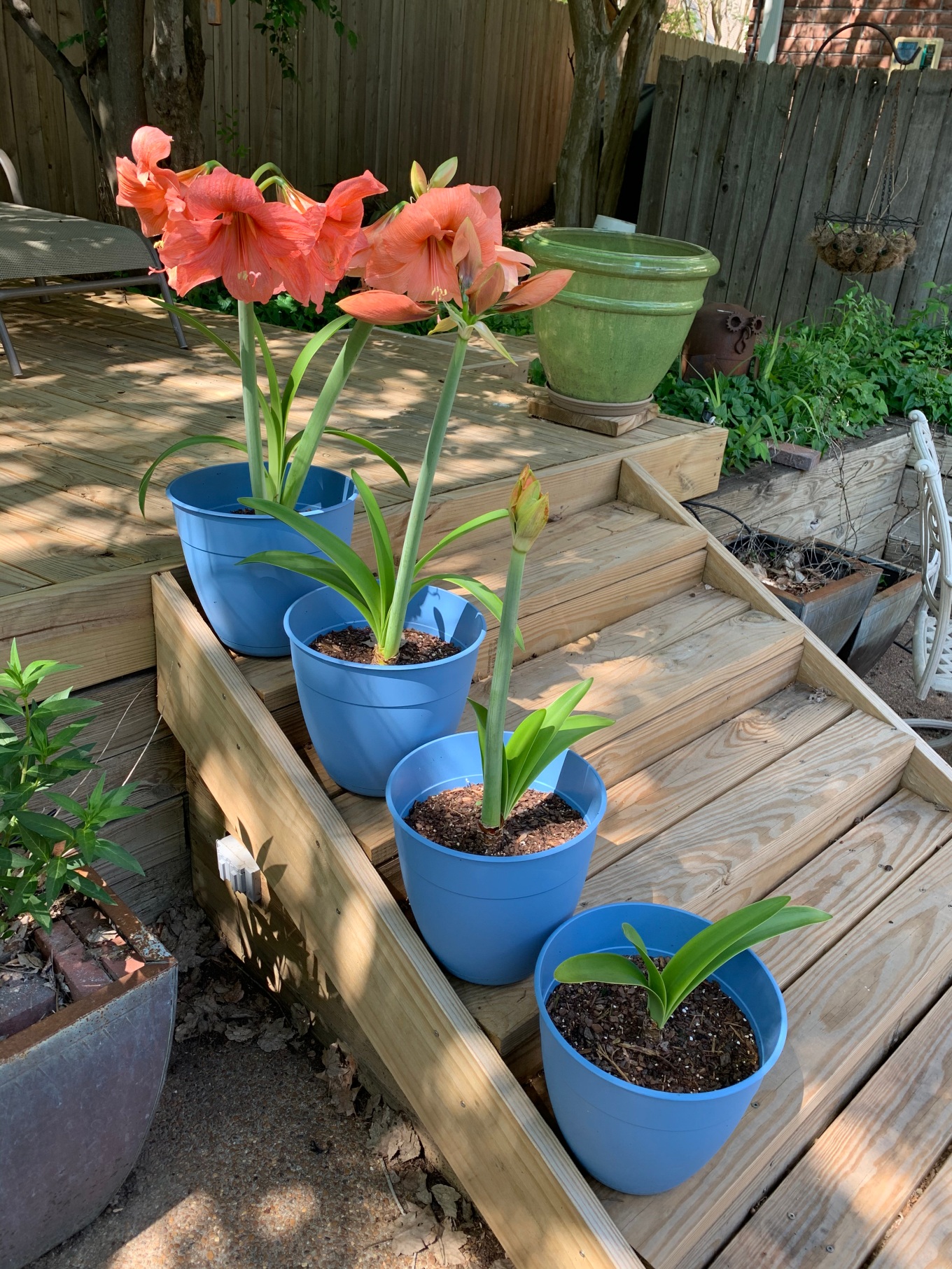 The granddaddy of them all put up two stalks and I decided to bring this one indoors to enjoy it in the house.

Again, we had some unexpected cold weather late in April but this time, I could bring all the pots inside to protect them.

Being slightly different varieties, they each bloomed at different times which was nice as we had one in bloom sitting on the hearth until early in May.

For next year, I already told my way wife, one or another, we were going to have to get back to Amsterdam but at least for this year, I enjoyed a taste of the town through my flowers of Amsterdam!