Last fall, as I was reflecting on our youngest son’s wedding, it made me pause to think back to our oldest son and daughter’s weddings over eight years prior.  Both occurring long before I began blogging, I realized it was time to look back at their special weddings as well since they represented our first children getting married.  And I thought it would appropriate to bring this story to you just before they each celebrated their ninth anniversary in 2020, with our oldest son’s anniversary coming first later this week. 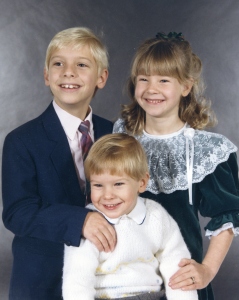 As a parent watches their children grow up, there are many wonders we ponder as they advance towards adulthood.  Where will they go to college, what career will they enter, and if they chose to get married, who will their spouse be and what will their wedding be like?

In the 2000s, our oldest son began to answer many of these parental questions.  He first did undergraduate studies at Georgia Tech and then graduate studies at University of Texas receiving degrees from both schools in architecture.  His first job took him to the west coast where he began to live in and around San Francisco.  It was here, whereupon answering an ad for a room to rent, that he met his eventual wife, a lovely woman who had in her early teens, immigrated from Russia with her parents and paternal grandparents.

Fast forward through the economic meltdown of 2008, both being laid off from their jobs and thus having ample time to get to know each other better, that they became engaged.

Their choice was to have a small destination wedding in the spring of 2011—in Carmel, California.

The previous November, after celebrating Thanksgiving together in Sea Ranch, my wife and I had enough time before we flew home from San Francisco to visit the planned venue.  It had a stunning view from where the ceremony would take place.  We could not wait until our return for the big day. 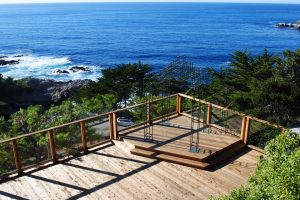 In selecting a date for the wedding, our son and his fiancé kindly accommodated an already planned event for us in Berkeley when our daughter and her fiancé would be getting their doctorates from UC Berkeley.  It was to be an action-packed week with two separate graduations at the beginning of the week and then a drive to the wedding venue for the weekend.

Being the father of the groom, there was not much for me to plan for except to pay for the rehearsal dinner and prepare my toast.  My son found the perfect location for it in close by Carmel-by-the Sea and selected the menu and wines.  After our second graduation that week, we were excited to drive down the coast to our ultimate destination.

Following a slightly chilly and overcast rehearsal, we made our way to the dinner.  It just so happened that the day of the wedding rehearsal was also my 55th birthday so for me it was a bit of a double celebration.  It was a delicious meal and when it came time to toast, I started off. 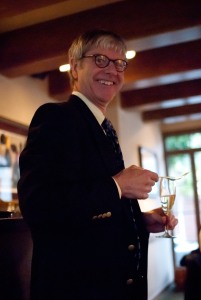 While I can’t recall the exact words, I said that day, based on my hand-written note I came across recently I expressed our joy for the two of them and their future together.  The one part I distinctly remember is I ended my toast with a few Russian words my daughter taught me to say (she got her PhD in Russian literature).

I recall stumbling over the pronunciation, which basically meant in English “To Your Health” but I must have been understood well enough because I could see that her parents were most touched by my closing cheer. 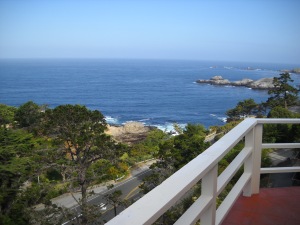 The day of the wedding started out nice and sunny although it did cloud up later that day, but thankfully the rain held off.

I know once my wife and I were seated on the right front row, one excited thought I had going through my mind was this was going to be our first wedding, in a sense the culmination of years of parenting.  Then when the bride made her way down the aisle, another thought was my son was marrying an absolutely beautiful woman. 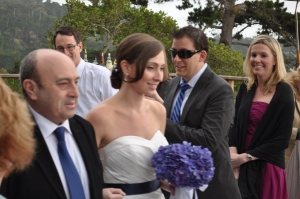 It was a lovely ceremony with our youngest son serving as best man for his big brother.

They exchanged their vows and then the ceremony concluded. 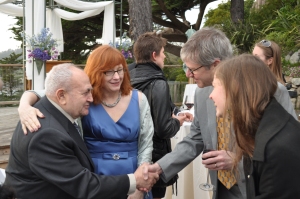 The dinner was preceded by a cocktail hour overlooking the ocean which gave us a chance to greet our new daughter-in-law’s family as well as members of the wedding party.

We next made our way up to the dining room where we had a meal of delicious tapas southern foods. 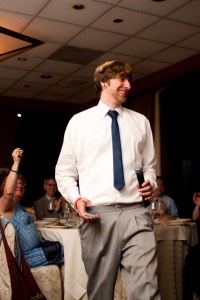 Following dinner, our youngest son, the best man played a second role of MC and DJ getting everyone up and dancing. 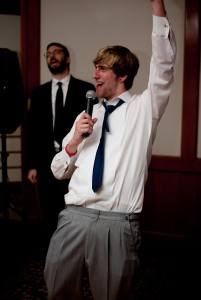 Nine years hence, I cannot recall how late the festivities lasted but it was obvious a good time was had by all.

The next morning, it was exciting to wake up and realize that our first child had gotten married and that our family had now expanded from five to six members with the addition of a new daughter-in-law.  As we flew back across the country that day, there was ample time to reflect back on what a beautiful wedding it had been and what an absolutely joyous event it had been.  But once home, we had to immediately get into high gear as our daughter was getting married in less than four weeks!

To be continued next month!

5 thoughts on “Our First Child’s Wedding” Leave a comment ›