While I was on my car book binge in 2017, there were a couple of books that I read that provided an interesting dichotomy—“A Tale of Two Cities” so to speak. The first was, Car: A Drama of the American Workplace by Mary Walton. Walton, a journalist who in the early 1990s gained access to the inner workings within Ford during the redesign of the Ford Taurus in order to author this book. It was an allegorical transition from “the best of times to the worst of times.”

In case you are not familiar with the Ford Taurus depicted here in an art installation in Seattle, Washington… 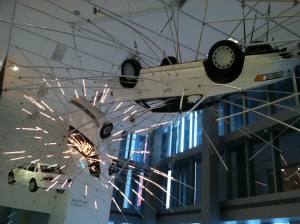 …Ford launched the original Taurus in 1986 offering dramatic departure from the boxy styling of the age. It was a huge success and catapulted to the number one selling car in the US in a short time. Thus when Ford took on the challenge of redesigning America’s best-selling car, it was a task fraught with potential risk.

At the time, Ford was moving to a different business model of creating project teams made up of dedicated individuals pulled from their functional areas. Previously, functional areas operated within their own silos providing input on all car projects active at a given time. With such a dramatic change in development approach, the book was written as a business model case study. But what could have been a graduate level business text for an Organizational Structure course was still an interesting read for a car lover.

The significance of this redesign was immense as the original Ford Taurus was cited as the most influential car since the Model T. Appearing in the mid-1980s, it literally pulled Ford from financial ruin to record-breaking profits. In the 21 years it was manufactured, it sold nearly 7 million copies.

Many of the car books I had previously read had been written from the perspective of the executive level management. This book got down into the details I had never known. For example, I never knew about the competition for space within the car between the different areas of design. A decision as seemingly simple as the difference between anchoring the side mirrors on the doors or on the small triangular shaped glass—the sail—just past the windshield could have huge implications in drag coefficient (wind slipperiness) and the ability to put a small speaker in that space.

Or how there was a weight budget for the car and every increase over budget represented a loss in fuel efficiency. If weight were added for some required component, it needed to be deducted somewhere else to maintain the gas mileage target. But switching to a lighter material such as aluminum wasn’t always an easy answer as that could negatively impact cost. An alternative seriously considered for the redesigned Taurus was reducing the fuel tank size by one gallon, a savings of about 6 pounds on a 3,300 pound car. Looking at the naked frame of a modern car, it is amazing to think that every surface and facet of the structure was probably negotiated in endless meetings and possibly arguments.

The book was published in 1997; the year after the new model was launched. But even within a year of launch, there were signs of trouble. If you Google the Ford Taurus today, you will find that the mid-sized model was discontinued in 2006. The redesign killed the car and the whole remake was a huge failure. Ford literally killed the golden goose; is it any wonder with this revolutionary design?

In spite of knowing the book would now be considered a case study of what not to do from a design perspective; it still offered an intriguing story.

The second book in this tale of two books was actually a book I first read when I was in high school, back when I did not have much time to read. Wheels by Arthur Hailey, is a fictional story of the auto industry by the author of Airport. I actually read a number of his books when they were published in the 1970s because he always presented a topic from almost every perspective imaginable.

In this case, Hailey portrayed characters from the auto union, the line worker, the auto dealer, the auto executive, the auto designer, the plant manager, the consumer, the ad agency and the ever-critical press. As I read Walton’s book on the Taurus, it kept reminding me of details I had encountered upon reading Hailey’s fictional novel over 45 years ago—even down to the acrid smell of the clay used to sculpt full-sized models of the cars.

Because I am such a slow reader, it is rare that I re-read a book but with the resurfaced memories from the Hailey book that emerged while reading Walton’s book, I thought it would be fun.

There were certain parts of Hailey’s book that I vividly remembered, like the need to add braces to eliminate instability at high speed at an added cost that would prove quite controversial. While we would not think twice about the cost overrun of a part by a few cents, when multiplied by the millions and millions of units produced, it added a huge cumulative outlay to the manufacturing cost.

Another story line I recalled from my original reading of the Hailey book was the corrupt auto dealer that was audited by the car manufacturer. As much as I love cars, I hate the car buying experience and the interactions between customer and dealer in Hailey’s book simply reaffirmed this distaste.

Another aspect that I found in both books was how intensive and demanding the work was. The long hours, constant pressure to meet deadlines in spite of development setbacks, and detrimental impact on workers lives and their family relationships reconfirmed that it was a wise choice for me not to have entered the automobile industry.

Having read both books now, it was amazing to find that even though they were written over 20 years apart, many of the issues brought up in Hailey’s book were still prevalent in Walton’s book. There were interesting parallels between the two books. Even though one was fiction, one was non-fiction, they told many of the same stories in portraying the best of times and the worst of times.