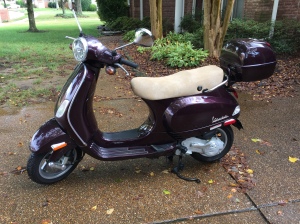 This fall, I finally got my wife’s 2006 Vespa repaired so it could be driven again.  And as I was taking her out for a test spin to make sure everything was working properly, I realized the history of my wife’s little scooter would make for an interesting story. 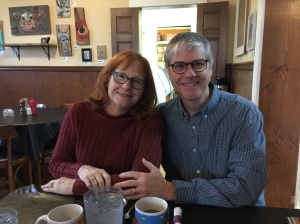 On multiple occasions, my wife commented that she would like to have a Vespa to ride to her office in Germantown from our home in Cordova.  I don’t recall what prompted her to want one.  It might have been the multitude of Vespas we would often see on our visits to Amsterdam. 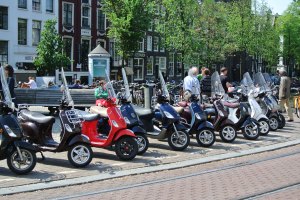 It was on a trip to Atlanta in the early 2000s to visit our son who was in school at Georgia Tech, that I came to the conclusion that I needed to figure out how I could get her one. As we waited for our dinner reservation that night, it just so happened that we were seated in front of a Vespa dealership.  Viewing the shiny scooters in the window, my wife again commented that she would like to have one.

I have always loved cars and throughout my life, whenever I bought a new one, it would be like the thrill of a child getting a new toy.  So when I saw that familiar child-like glee in her eyes seeing the Vespas in Atlanta, I knew I needed to get her one.

Fast forward to Christmas 2005, when I decided to make it happen.  I went to the local dealership to see what they cost. Never had we spent more than several hundred dollars on each other for Christmas presents so this gift would represent an order of magnitude greater than any we had given each other in the past.  But that year I had gotten a significantly larger bonus that made it financially viable.

To be on the safe side, rather than wheeling in a new Vespa on Christmas morning, one that I had picked out myself, I gave her a model and told her she could pick out whatever she wanted. 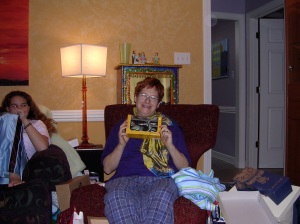 I also gave her the sales brochure, which just happened to have a purple one on the cover (her favorite color). 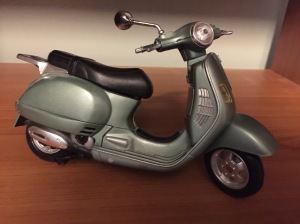 The dealership happened to be closed between Christmas and New Years so it was the second week of January before we could get over there for her to pick out her gift. 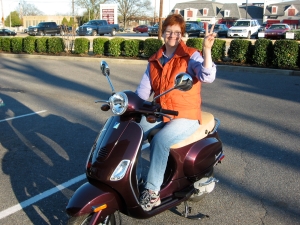 As I suspected, she picked out the purple one (which is the one I would have gotten her so my guess would have been correct) but not just because it was purple.  This one, an LX50, had an engine that was slightly less than 50 cc (smaller than my lawn mower engine).  As a result, it was regulated, as a motor scooter, not a motorcycle, which meant a special license beyond a normal driver’s license, was not required.  She could drive it immediately.  However, since she had no experience, she asked me to drive it from the dealership in midtown Memphis to our home in Cordova.

Since it had been over 20 years since I had ridden a motorcycle, I chose to play it safe and stick to back roads.  My wife followed me home in our car.  This was when I learned that a LX50’s top speed of about 45 mph meant it was not really designed for busy streets with speeding drivers rapidly accelerating around you. 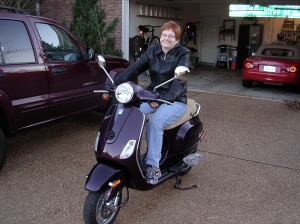 When we got home, I captured photos of her first ride through our neighborhood where the speed limit was 30 mph.  My wife was all smiles! 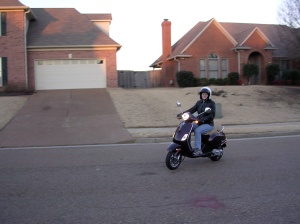 Then less than a month later, the reality of trying to drive a scooter in the winter hit home with a rare snow; it could be very cold and quite dangerous. 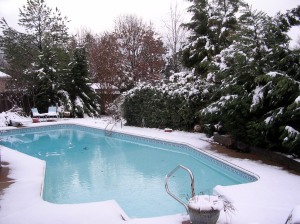 Once summer arrived however, I began to ride it to keep the battery charged.  I would use it to run errands.  This was when I was tracking its gas mileage and discovered that it could get over 90 miles per gallon.  Not bad. 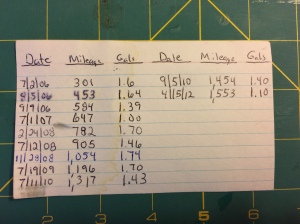 After I took a few trips down Germantown Parkway to the pool store, I offered to drive in my car behind my wife as a friendly driver to see what it would be like for her driving on a busy street where the speed limit was 50 mph.  She did it but decided she would not be comfortable doing that on a routine basis.  Having driven the same street several times, I had to agree with her.

After that, we would ride it together on short trips out to dinner but with both of us on it, its top speed was reduced.  Still we would boldly park it right next to the Harleys.  On a trip to our gym together one morning, when we looked back and saw a trail of gasoline, we knew she would need some repairs.  This was the beginning of several repairs that would be required mainly because of its lack of use. 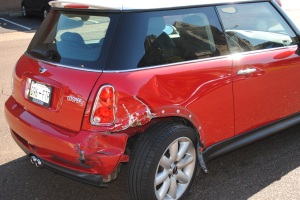 Then disaster struck not long after my wife’s Jeep died and my Mini got rear-ended.  Suddenly we were down to only one car so my wife began to drive my Miata and I drove the Vespa to work.  I had a reserved parking spot and so rather than park the scooter in the motorcycle spots; I pulled into my usual reserved spot.  At lunch that day, I got a lot of ribbing about my ride and was told several friends had considered tying helium balloons to it to see if it would float in the air.  Another friend sent me a YouTube video of people riding their Vespas on the back wheel (called a wheelie).  While I laughed along with them, it was actually on my way to work a few days later when someone tried to run me off the road for going too slow that stopped me from riding it to work.

After that, it didn’t get much use and after some time wouldn’t even start.  We repaired it once but soon after it would die when coming to a stop.  I thought I might be able to adjust the idle speed myself and bought a repair manual online but never got around to figuring it out.

For six years, it sat in its spot in the garage; a constant reminder of what might have been for my part, a foolish gift.

Then one night while out to dinner with some friends, we saw many of the little scooters that were being ridden around the city.  I commented to my wife that she didn’t need one of those since she had her own scooter she could ride to which she replied, yes if it was fixed.  While my intention had been to fix it in the spring each year, several years went by that I did not and so it continued to just sit.

But that response from my wife cut to my heart and so I resolved to get it repaired.  And we did (turns out we learned from the repairman that only a few LX50s in this color were even shipped to the US so she is indeed rare).

She’s back in her usual parking spot in the garage looking brand new. 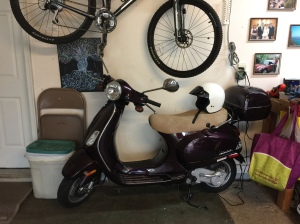 Even the engine looks brand new (practically it is given she has less than 1600 miles, in spite of being 12 years old). 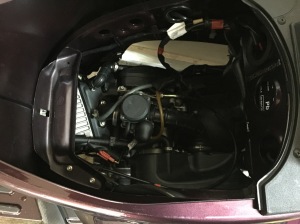 Now that I am retired, it will be mush easier for me to take her out for a spin to keep her running properly.  I’m already thinking of some of those short errands I can run her on.  And as my wife gets more comfortable driving her again, she too can get out to enjoy a fun ride on this cute little scooter! 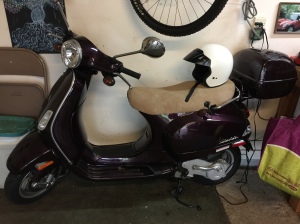