Earlier this year, I wrote about the many new things I had learned from reading one of my dad’s sermons each day during Lent.  (This was the second year in a row that I had done this for Lent.)  As I did last year after Lent, I decided to continue to read one sermon a week throughout the year.  And on the very first Sunday after Easter, I came across a most pleasant surprise. 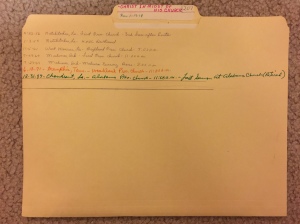 Before I ran off to early Mass that Sunday morning, I had time to read the sermon that I had pulled from Dad’s files.  From the date listings on the folder, I could see that it was one he had originally written and given the year I was born and it was one of those that after giving it at several different churches, he had retyped it (the original hand written versions are sadly lost).

The title was “Christ in Midst of His Church” and was focused on the Book of Revelation and the message that John conveyed that Christ is with us no matter what uncertainty or hardships we may face in the future.

Having read over 200 of my dad’s sermons thus far, I knew Dad often would give a sermon specific to a challenge or issue that his church might be going through at the time.  So as I read the sermon, I was at first a bit puzzled when he specifically mentioned the church by name and his own family, as they both would be going “through a period of change” soon.  But when I got to the last paragraph of his sermon, I realized there was a reason for this personal message from my dad, one that I had not encountered in any previous sermons.  This was the sermon he gave the day he retired, his “last official sermon” as a full time Presbyterian minister.  Flipping back to the folder cover, I confirmed Dad had documented this fact next to the last date of that sermon.

So it was to be a period of change for this church, as they would need to search for a new minister to replace my dad, who had been minister there for almost 10 years.  And it would be a new beginning for both my mom and dad. After 40 years of fulltime ministry and 40 years of marriage, their lives would be dramatically different.

I have mentioned in previous posts that my dad over his lifetime wrote over 700 sermons and that I am on a multi-year pilgrimage reading through them all in chronological order.  So realizing this was the last one he gave as a full-time minister, it got me wondering how he could have decided which sermon to give as his last (it was not to be the last sermon he ever gave before he died as even in retirement, he occasionally filled in for vacant pulpits—that last sermon is still waiting for me to discover one Sunday morning).  Could he maybe have written a swan song or a last hurrah?  But no as was consistent with my dad’s character, it was not about his 40 years of service, it was about the topic most relevant to that church at that particular moment—finding a new pastor to serve in a small rural community so that the church would not die out.

After I read the sermon, I began to recall that I had driven from Memphis to this small northern Louisiana church to hear him preach from the pulpit for that last time and to attend the retirement reception that was scheduled that afternoon (I was able to confirm from the church bulletin the reception was from 2:30 to 4:30 that day).  My two oldest children accompanied me for the trip (my wife stayed at home with our 2-year old for everyone’s benefit) and my brother flew in as well. 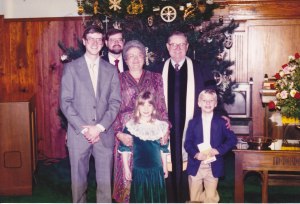 I revisited this retirement celebration just last year when my siblings were going through and dividing up my parent’s old photo albums and came across a number of pictures taken at the reception that afternoon.  Thinking about the uncertainty my parents faced on the precipice of their retirement conjured up thoughts of the uncertainty I faced upon my own retirement just last fall, almost 30 years after my dad retired.  I had never connected the two together but the similarities are there (for me, almost 38 years of full-time work and 38 years of marriage).

As I recalled that Sunday, the day my dad retired, the last day of the year 1989, I remembered how after it ended, I had concerns about driving home on small back country roads on New Year’s Eve, but we made it home fine.  This concern didn’t stop me from staying for the reception and I am so glad I did.  It was a celebration of a lifetime of service and attended by many, some from each of the three different churches Dad had served in northern Louisiana.

As I was going through some old files to confirm the dates of photos for this post, I found three folders, each with one of my kid’s names written on them in my dad’s handwriting.  Inside were a letter and a copy of one of his sermons. Sometime after my mom died, my dad came across one of his sermons that he thought would be relevant to all his grandkids and so made a copy for each one.  I cannot recall when I received these folders but the fact that I still had them means I never did give them to our children, a neglected action I will have to correct on my next trip to visit them.

So thanks to reading my dad’s sermon that Sunday morning, I again not only learned something new, but I got to relive that last day, that last sermon, and read a prescient message from my dad about my own retirement.  And the task of completing delivery of that special message he wrote so many years ago for my children as well.